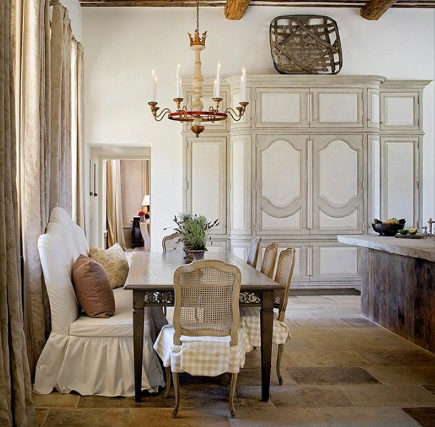 Sofas are moving into the kitchen to make dining spaces more informal and comfortable.

Don’t you agree that a banquette sofa is an especially logical choice for flexible seating at a dining table? Distinguished from a built-in banquette by the presence of legs and the lack of arms, a banquette sofa makes it easy to slide in without having to move the table. Three kitchens in different parts of the world illustrate the versatility of the the kitchen banquette sofa and it’s suitability for kitchens, whether the table is used primarily for breakfast or every day dining. We’ve been seeing banquettes for a few years now and detailed the trend in previous posts: Banquette Sofas Return, Formal Banquettes, Informal Banquettes and Big Kitchen Banquettes. It’s a change from all-kitchen kitchens but  as our homes continue to multitask, I expect to see even more.

Stone houses are popular in the Southern U.S. where we see a share of European influence as well. Louisiana architect Kevin Harris used the Tuscan vernacular for an expansive traditional home in Mississippi [top]. While the kitchen has been described as Tuscan-inspired, the overall effect is Belgian I find – perhaps it’s the sweet details like the skirted linen banquette sofa and the gingham covers on the Provencal side chairs with caned backs. I do like the shaped back of the banquette sofa as that gives it personality. And, while frilly, it looks quite comfortable, which is the point after all. 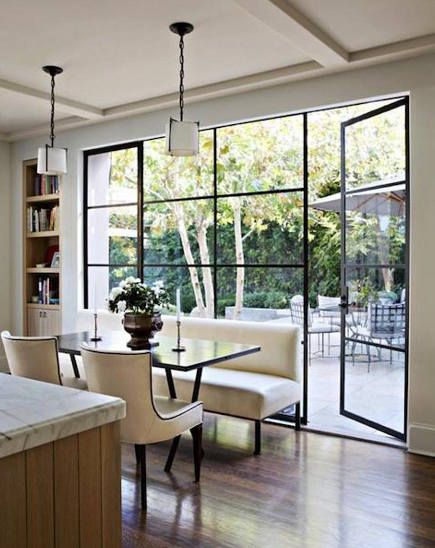 I grew up in L.A., where the grand old houses from the 1920s and 30s are especially prized and wonderfully modernized. This is a great example in my old neighborhood. Creating a glass wall with steel casement windows made so much sense for the climate in Southern California. And using the window wall as a backdrop for a contemporary white banquette sofa is a refined approach to a breakfast space. At night, the banquette might serve as a place to sit and chat if the table it set up as a kitchen buffet for a dinner served outdoors. Architect William Hefner captured the glamor of old Hollywood in this kitchen while managing to tweak it so that its modern and inviting as well. 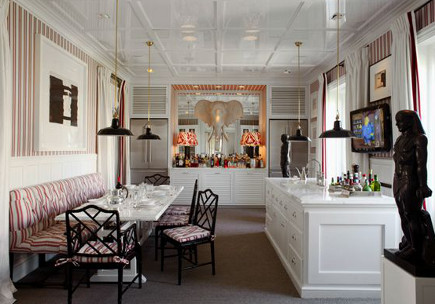 A super-sophisticated European kitchen takes the tent-stripe theme from the walls to the banquette, which is lightly scaled but beefed up with a tufted back and seat.  The kitchen, by Luis Bustamante, is declaratively multi-purpose with a substantial and rather glamorous bar is set up between the two refrigerators with more libations on the island. A table seating eight isn’t just for breakfast either – this kitchen banquette sofa is designed for entertaining.

Copy and paste link to quick-share this post: http://bit.ly/1jwqOi1