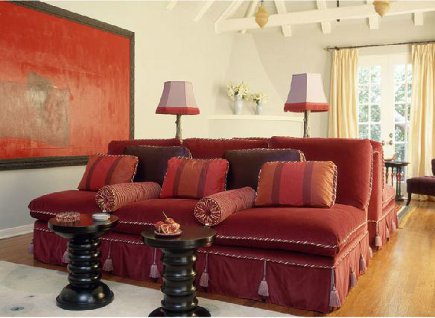 Ancient magazine pix and a thrift-store-find inspired my affection for banquette sofas.

It’s been many years since I’ve seen banquette sofas – one without side arms – used in rooms. Lately, I’ve come across three. The red-velvet and passementerie pair L.A. designer Antonia Hutt used to express Mediterranean-Moroccan theme [top], samples the 1980s when, at a minimum, banquettes were done in velvet and trimmed with bouillon fringe around the base. Cording and tassels also were common – Hutt nailed it and embellished by adding the neck-roll-pillow arm rests. 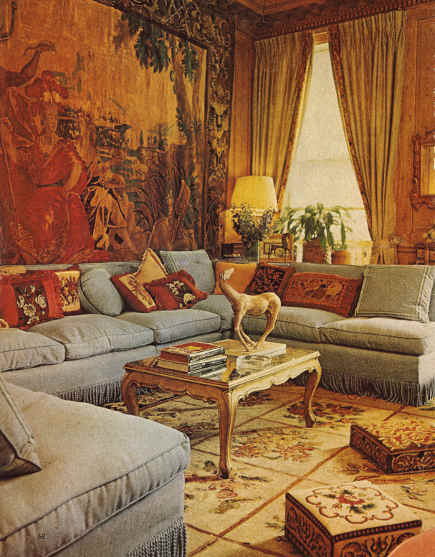 Here’s a bona fide early ‘80s New York apartment owned by an English press lord. I’ve had this banquette sectional kicking around my files forever — you can see why it immediately came to mind. I love the lumpy down pillows and this was one of my inspirations when, a few years later,  I found a heavy, custom 6-footer for $400 in a thrift shop. I don’t have a photo (wish I did!) but after I had it reupholstered it served my single-girl apartment well for 15 years. When I moved into my husband’s place there was no space, so back to the thrift she went. 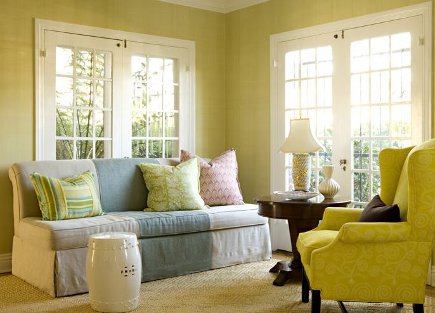 A very charming and refreshingly updated and informal banquette sofa keeps the 3-seater idea alive by using a contrasting swath of linen down the center. There’s a graceful scroll back on this piece and simple skirt. For me, it works equally well without the addition of cording or other embellishments. 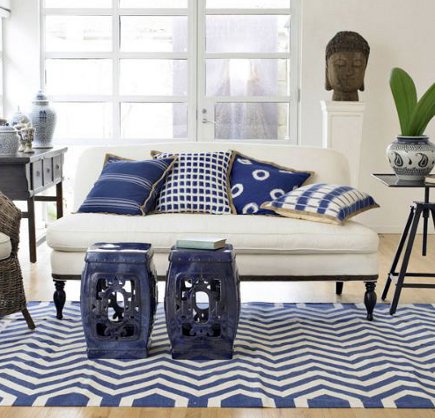 Now, the Wisteria catalog has modernized the form by starting with the English style sofa on legs (no skirt), losing the low arms, streamlining the back, and keeping the seat pillow simple. I adore them all but think this latest version just may be my favorite.