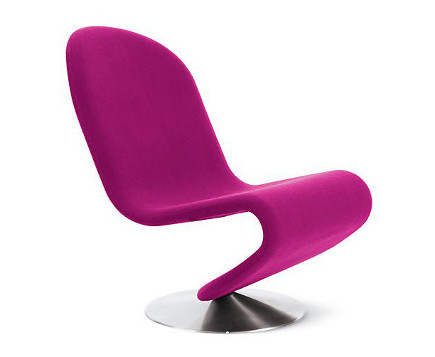 Vibrant or subtle, expected accent colors can embolden any room.

I’ve been thinking about accent colors as I look around my house and consider what needs repainting. Because my walls are more or less neutral, and I have a whole-house color scheme, I like think about how to throw fresh colors into the mix. This year, it’s been hard to get by emerald green which, thanks to Pantone marketing, is showing up everywhere. Fabulously or hideously (perhaps both) I lived with a Chinese Art Deco emerald green rug for many years and still find it a challenge for home décor. So what’s fresh and great I asked myself?  Ironically, as I began poking around, the ten colors that felt newest to me seemed to turn up on chairs, which happily appear to be pushing the color envelope.

1. Fuchsia, hot pink, or shocking pink. This saturated member of the magenta family first became fashionable in 1937 when it appeared on packing of Surrealist couturier Elsa Schaiparelli’s signature perfume “Shocking,” and returned as hot pink during the 1960s. Incongruously girly, it lives in on the high-end upholstery world via Verner Panton’s 1937 System 1-2-3 lounge chair [top] although it has turned up over the past year or two on walls and accent pieces.  Fabulous with white and cream, chocolate brown, and any blue or green, it’s equally dynamic on pillows and throws. 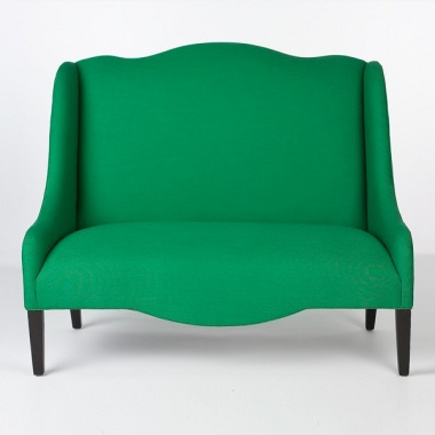 2. Emerald, jade, or Kelly green. In this case, a color I consider difficult does a big favor for a staid settee. It proved equally successful as draperies in a much-admired gray dining room by Kay Douglass which first appeared in Veranda and which we featured last fall. 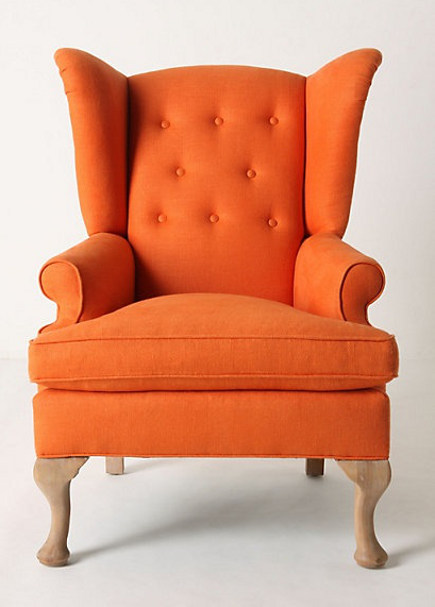 3. Mandarin, tangerine, or orange. Before you’ll think “ugh tangerine tango, so last year,” think again. Anthropologie’s Howell wingback chair has that juicy fresh look in linen and a hue they named Soleil (sun). I might have called it mandarin to hint at an update but this staple mid-20th century color began its mini-revival when it was adopted by hipsters ten years ago. You might want to dismiss it as “so last century” each new generation seems to rediscover it because it provides so much bang for every buck they have to spend when starting out. Even in a closet-sized kitchen. 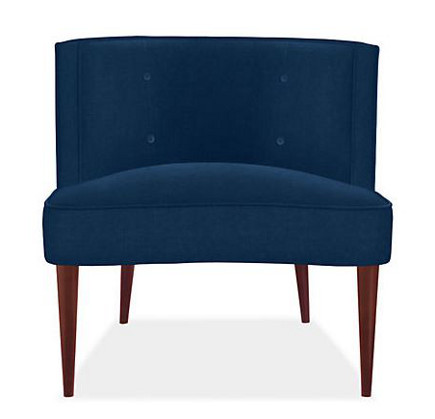 4. Indigo or midnight blue. Often seen on red carpet gowns and couture clothing this year, let’s not forget we’ve worn this blue as jeans f-o-r-e-v-e-r. Showing up as an alternative to black for home decor, it is darkly gorgeous and looks great against gray, taupe and cream walls. An age-old pair up with coral (especially in Asian design) indigo can go masculine or feminine, trad or modern, depending on accents. It’s especially slick on Room and Board’s Chloe seater. 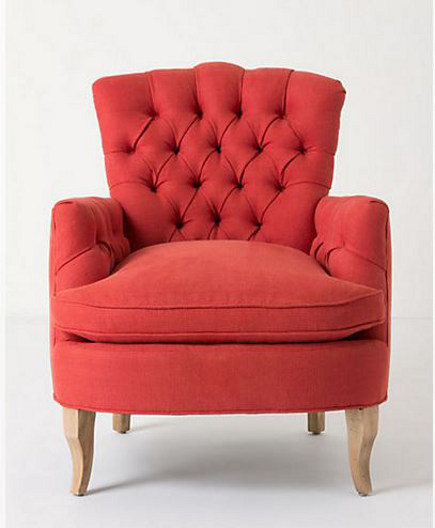 5. Lobster or desert red. For me, this has a softer edge than classic red and it’s slightly deeper than coral. A color I’ve often admired in Chinese ceramic details, it hasn’t loomed larger. Leave it to Anthropologie to launch it on their Marjorie chair where it has real dash. 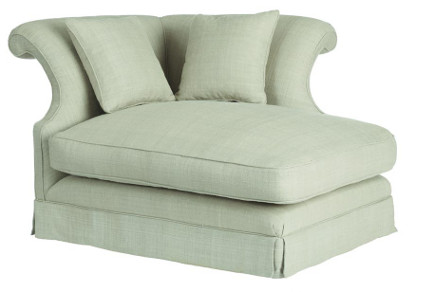 6. Eau de Nil (Nile bleu, water of the Nile), gray-green. Paler and grayer than celadon, eau de nil has essentially been a lost color (unless you consider clothing in 19th century portraits). British designer Barneby Gates reintroduced it recently for his Chairs wallpaper – without tarting up the old-fashioned name. Here it is again from Britain’s okadirect on their Maggiore chairs in silk. One of the most sophisticated and soothing of the greens (and among the least appreciated) I find it a serious rival to Gustavian gray. 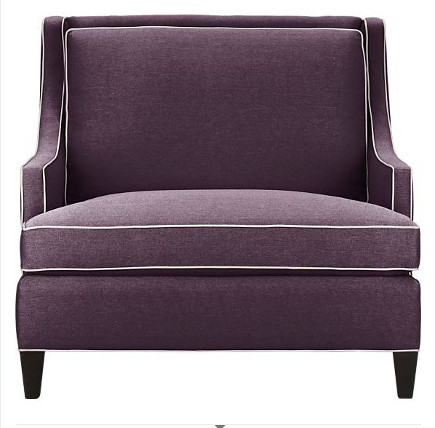 7. Concord grape, plum, purple or aubergine (eggplant). This current darling of high-end upholstery is rampant in magazines, often combined with gray. So it’s not rocket science for Crate and Barrel to offer their deep purple Barrington chair-and-a-half with crisp white contrast welting though it seems like a departure from their usual nubby neutrals. 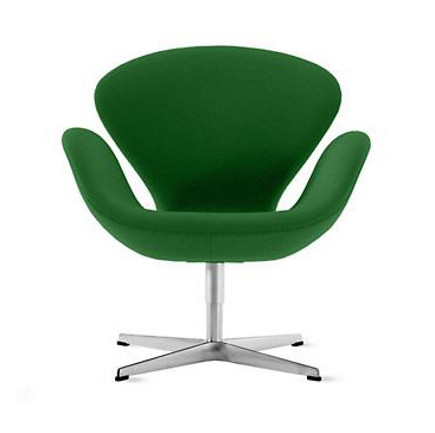 8. Forest, pine or grass green.  First cousin to emerald, this choice is still difficult in its own way. It takes something as sleek as Arne Jacobsen’s iconic 1958 Swan chair to not automatically evoke Christmas. To its credit, this is a superb choice against dramatic dark walls, especially charcoal gray, and tart yellow or lavender accent pillows would move it away from the “Madmen” aesthetic. 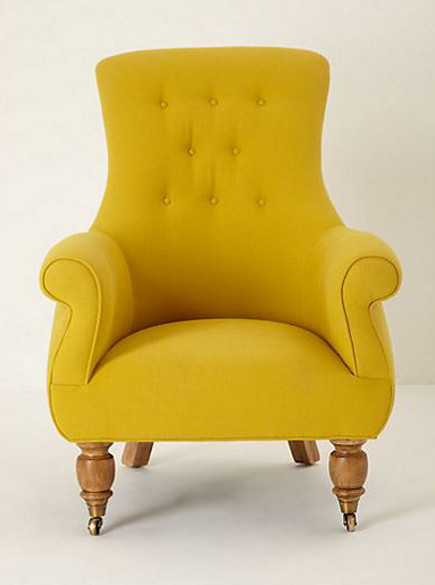 9. Sunflower yellow, mimosa, or turmeric. Yes, that perennially sunny yellow. Anything but cutting edge, this level of visual potency requires confidence whether it’s chosen for a minimalist interior by Jennifer Post or, like this Astrid chair from Anthropologie, it evokes the spirit of Provence. 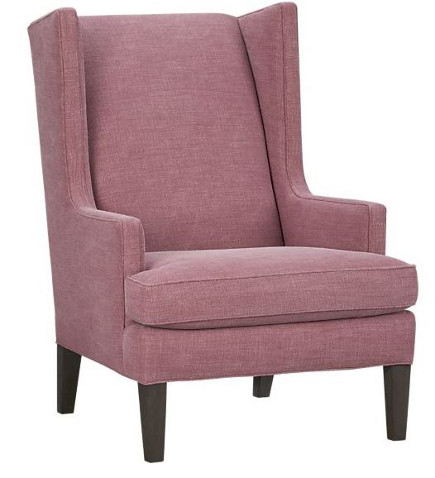 10. Dusty rose. Has Crate and Barrel gone on a rescue mission? Calling it raspberry for the Luxe wing chair appears to be a retailer’s strategy for making such an odd color seem familiar. With enough undertone to push it towards the berry family (sort of), this remains an old rose to me and thus inevitably boudoir or teen. On the other hand, even a chair as safe as this would look stunning in a raw space like a Berlin loft with concrete walls — and why not a pair? And for anyone who wants to dispute my theory of “so old it’s new again,” I can only ask: do you remember a Revlon nail polish color called Windsor?

Copy and paste link to quick-share this post:  http://bit.ly/Z8oEuK