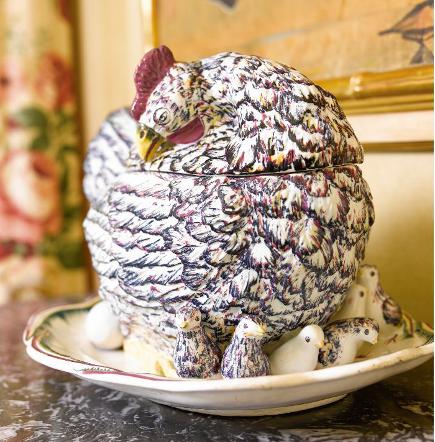 The Brooke Astor estate auction examines the intimate possessions of a celebrated woman.

This post was updated to include sales prices fetched in the sale, on September 25, 2012.

Anyone who lived in New York City at some point during the 20th century knew of Brooke Astor. So the Brook Astor estate auction is something of an event. In the past, figures like Mrs. Astor and the late Jacqueline Kennedy Onassis opened their homes only to a select circle of friends throughout their lives. So the public glimpse into their private worlds only takes place after their deaths when their everyday “stuff,” as I like to call it, is put on public display — and splashed all over the web — for anyone to see and even buy.  Mrs. Astor was the socialite and philanthropist who was continually photographed and lauded in the press for her generosity to the New York Public Library and the Metropolitan Museum as well as other education and cultural charities. Born in 1902, she gained fame in mid-life as the widow of a third husband, Vincent Astor, whom she married in 1953 and who died six years later leaving her in charge of an epic charitable trust. That trust provided the engine for her generosity and social power over the next half century. 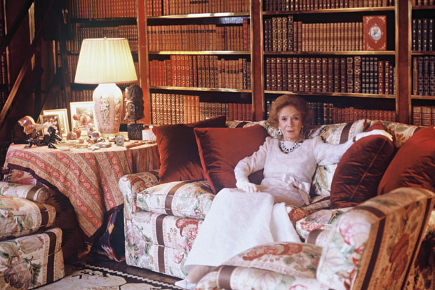 The contents of Mrs. Astor’s Park Avenue Apartment and her country home in Westchester County, NY, went on sale at Sotheby’s New York galleries on September 24. Over two days, 901 pieces of her life went to the highest of the high bidders, grossing over $18 million, well above the high estimate total. When the catalogue first came online, I clicked through to see what might be there beyond the expected “basics”: 18th century French furniture, fine paintings, expensive carpets, leather-bound books, and gilded French Louis-this-or-that accessories. My choices most certainly did not represent highlights of the sale or even anything typical. They were purely things I viewed as somewhat surprising and modern in the homes of a person who died in 2007 at the age of 105!

One of my favorite objects in the sale is the fabulous French hen and chicks terrine with a fixed base [top]. And there’s more in this lot (584) including a lamb-form terrine and an Italian duck-form terrine with cover. Sales estimate for the seven pieces is $2500 to $3500 — the lot cost the buyer $9375. Mrs. A. was well known as a dog lover, too. 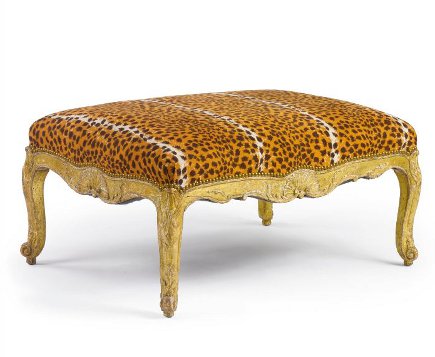 This Louis XV style 19th century tabouret looks so now it could come from a catalog but, of course, it’s the type of furniture retailers were copying for so long. Anyone who enjoys refinishing might want to use the zoom feature on Lot 530 to take a closer look at the finish on the frame, which is très subtle. The ottoman measures 33 x 24 x 16″ and, while estimated to sell for $800-1200, that almost seemed like a teaser to me. In truth, it was a teaser. The ottoman cost the buyer $4375. 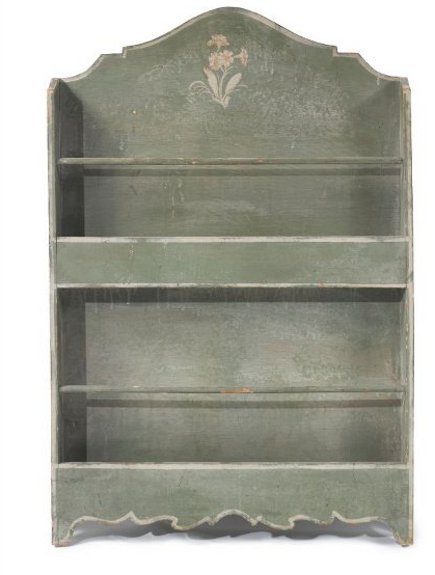 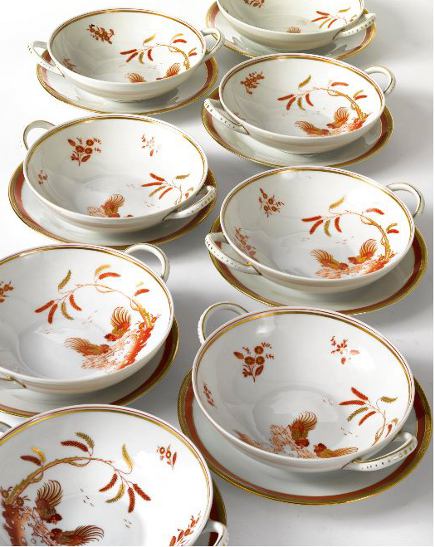 As a china brand, Richard Ginori is old-fashioned but, as I noted when I hung my dining room fish plate wall, simplicity is timeless. Lot 206, comprises a collection of 22 cream soup bowls and saucers in Ginori’s  “Fighting Cock” pattern. How great to use for a big family gathering at Thanksgiving and what a buy if they were to sell within the $400-$600 estimate. Ha! The soups cost the buyer $6250. Talk about hooking them in with a low estimate. 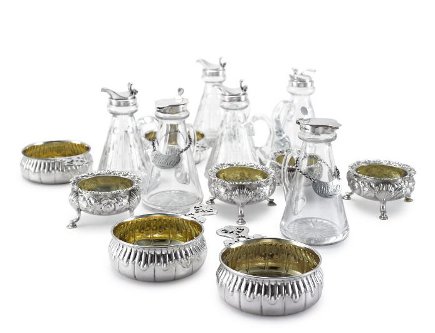 Silver table accoutrements, Lot 186 (estimate $700-$1000 for 14 pieces) include whiskey tots (or jugs) for refilling highballs, open silver salt dishes, and four small silver dishes called porringers – formerly used for eating soft foods but now not much use for anything other than olives. Dates are known for many of these pieces – the most recent is 1971.  Years ago, whiskey tots would have been useful for dinner parties where people drank Scotch with meals. Perhaps some still do. Somewhere. Someone paid $1375. 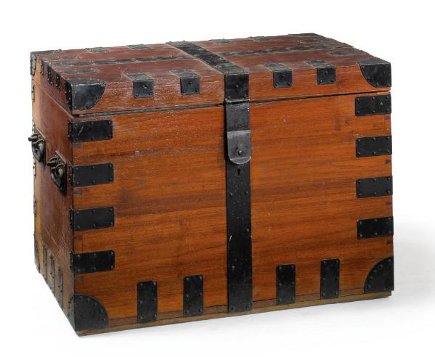 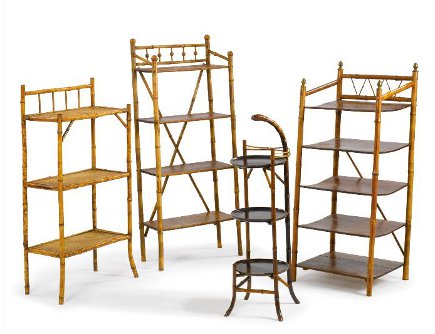 Bamboo was another theme in Mrs. A’s houses. This collection of four small-scale bookcases(she also was a published novelist), Lot 786 is bundled together with a set of library steps (est: $600-900).  I happen to be partial to vintage bamboo furniture and unless the price went wild, this lot would give someone a good bang for their books and bucks. Must be a dealer who paid $1625 for the bunch and can divide and resell. 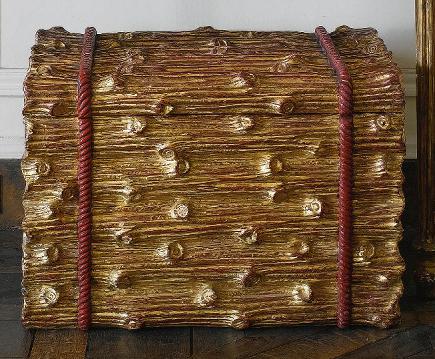 As boxes to slip under a table or beside a chair go, this is a beauty! The rustic log-forms are gilded and the rope has a wonderful old-red finish, too. The box is brass-lined and measures 22 x 15-1/2 x 15” and trust me, this lot (#93) will go for so much more than the $200-$400 estimate, I’m betting jaws will drop. And now I’m patting myself on the back as an auction spotter  because this box sold for $21,250. I’m headed out to by Lotto tickets in a few minutes. 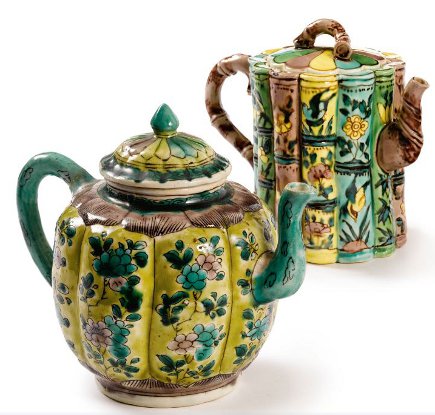 Forgive me while I drool over these two tiny Qing dynasty Chinese teapots. Where did the Victorians get the idea for majolica? Look no further than here. All I can say is enable the zoom and take a closer look – the estimate is $1500- $2000 for a reason. Mrs. A. had lived in China as a child when her father was the Marine Corps commandant. So Chinese ceramic fans like me have much to oogle in this sale, especially in the lamp department. But these little teapots don’t seem to have impressed anyone since they sold for $2000. 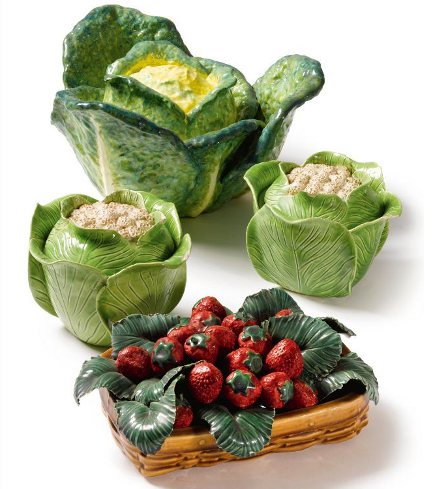 Lot 600 is a group of 13 pieces of modern “foodware,” (est: $200-300). Williams-Sonoma still carries similar pieces but these look so luscious. If I wasn’t selling more than buying these days I might even consider bidding on this lot in the hope that it might go somewhere in my price range. Unlikely? The great thing about auctions is one never knows until the last bang of the auctioneer’s gavel. The verdict on this lot: $3125. Who else would tell you these things?.

Copy and paste link to quick-share this post: http://bit.ly/R87Bco

You also might enjoy Collector’s Day at the Auction