You are here: Home / Decor / Collecting / Day at the Auction 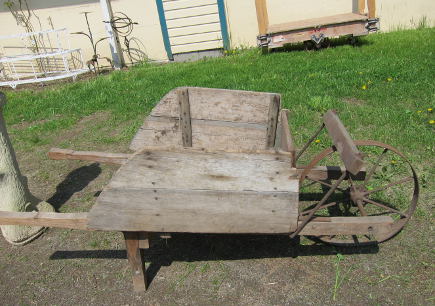 A country auction, to paraphrase Forest Gump, is like a box of chocolates.

You never know what you’re going to get at a country auction, even if you study the catalogue online. What pried me out of the house on a sunny Saturday morning was the prospect of some 80 cast iron American doorstops coming up in a sale nearby. And while I have limited my collection of flower doorstops to a very specific type, I was hoping there might be a new gem for me. However, on the way into the sales room I couldn’t resist taking a photo of an old wooden wheelbarrow [top] that would look make a great flower stand for a patio, no? 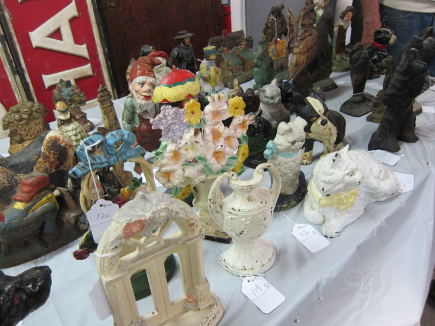 In a way, I shouldn’t have gone to an auction. As I detailed in previous posts, combining two houses was a huge task that required a massive house sale which I vowed would be my last. But since I also sold all our modern art two years ago my walls are somewhat bare. Mr. AM, who can be very Zen, is happy with the blank walls as our rooms are relatively small and the rugs have a good deal of pattern. Me, not so much. So I’ve been thinking I’d like to find interesting objects to hang, especially if I can snag a few good buys at a country auction that won’t make me ask myself what I was thinking if I ever need to downscale again. And this auction had some really interesting pieces that merited a closer look. Unfortunately, the doorstops weren’t in great condition and the white flower vase with gladioli (center of the photo) is one I already own. 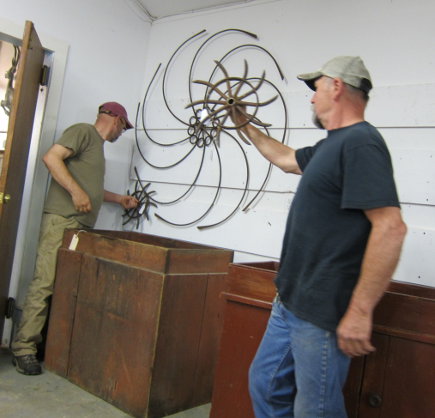 A big metal piece like the large spiral farm implement – nearly 5 feet across – called to me from the catalog. It came with two smaller spirals and would have been a good size one of the TV room walls. But up close it lacked something. I’m not sure what, but I didn’t love it enough. 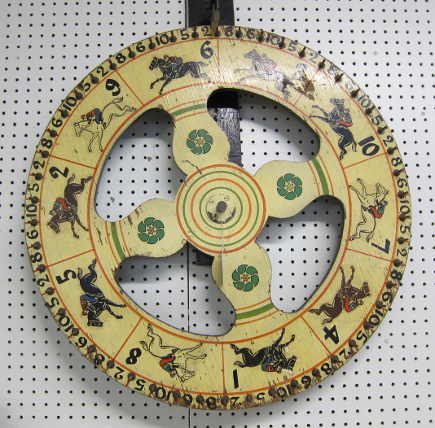 One piece that immediately caught my eye was a super charming old 30-inch diameter gaming wheel with original paint and horse decals. In person it sings on the wall. I have just the spot for it in our bedroom so I left a bid. Evidently I wasn’t the only person who saw the potential —  it sold for double what I had hoped to pay. And here’s an even bigger surprise: Allison had featured a gaming wheel with this exact same wheel in her Retro Home Decor post — talk about timeless. 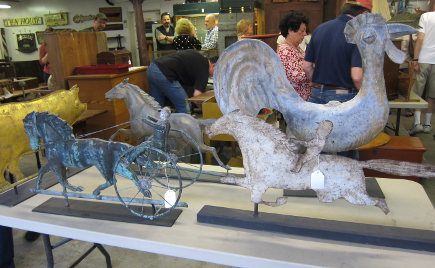 There were so many good weather vanes and small country metal sculptures it made me wish we had one of those huge beach houses with big blank wall where displays look spectacular. 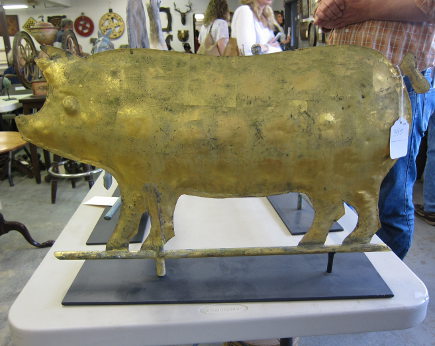 My favorite was the gilded copper pig weather vane, which sold for $475 (probably to a dealer who will triple the price). 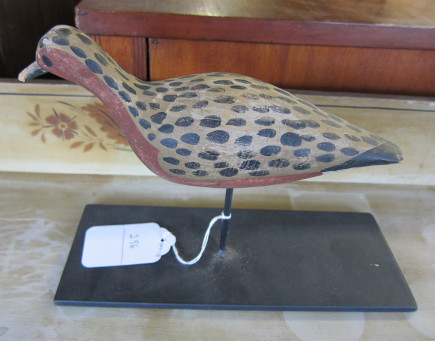 Another sweet piece was a shore bird decoy on a stand. 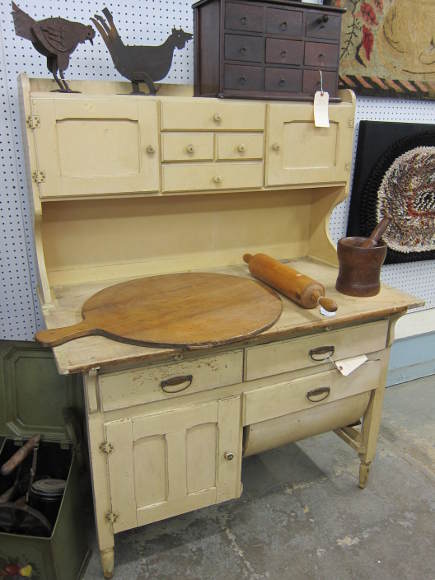 An unusually nice baker’s Depression-era baker’s cupboard had two pull-out cutting boards, the usual side doors and a flour bin. What a find for a retro kitchen. 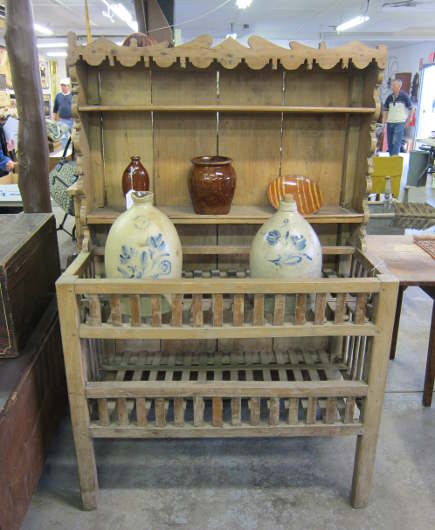 I’ve seen butcher’s tables and bakers tables but never before a 19th century standing French cheese press. What lovely old wood. In addition to display on the top, the open drying shelves on the bottom would be great for storing root vegetables, towels, cutting board, trays or other types of kitchen equipment. I really wanted to buy it not only for its beauty but also because it was so unique but my blue hutch doesn’t leave any room in the kitchen for other pieces. 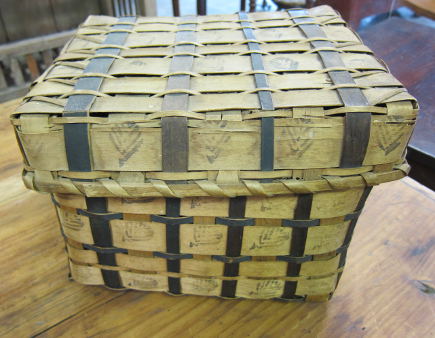 Several years ago, I did an article on collecting 19th century wood-splint baskets with potato stamp designs. A basket similar to this one, from a collection at Harvard, was a prime example. This covered basket was in fabulous condition, too. 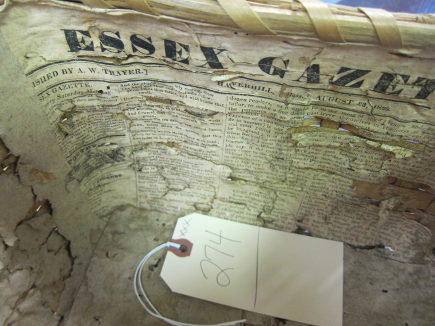 And just look inside! It is lined with a front page of the Essex Gazette from Waverhill, Mass dated August 23, 1828 still partially intact. A piece like this is what make me love antiques so much. Who put the newspaper there? I’ll never know but I love pieces like these which I consider to be a type of living history.

A pair of lovely 19th century, signed creamware platters were comb-decorated in my favorite soft blue. There weren’t any chips or cracks and if I hadn’t just sent the last of four boxes of china out to DD2 (I believe in early heirlooms) I would have bid on these as well. It kills me that they went for $50. Then again, auction season has just begun.