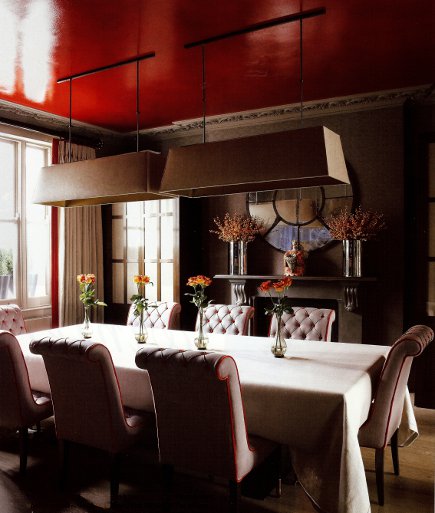 From a summer sunset to mid-century chic, orange décor is back and becoming a basic.

Now that the artificially named Tangerine Tango hue has been launched as color of the year by Pantone, expect to see an increasing number of home interiors using varying shades of orange. Maybe. Sometimes yearly trend colors like tangerine catch on; sometimes they don’t. Here are a few juicy examples that have turned up.

The intense orange that turns up in summer sunsets may have been the inspiration for the lacquered ceiling of an English dining room with mud-colored walls [top]. Unusual and reflective an orange ceiling begs for candlelight. We’ve shown Colorful Ceilings  in the past. They are always a favorite and this is no exception. And how warm this room must be on a chilly winter night. 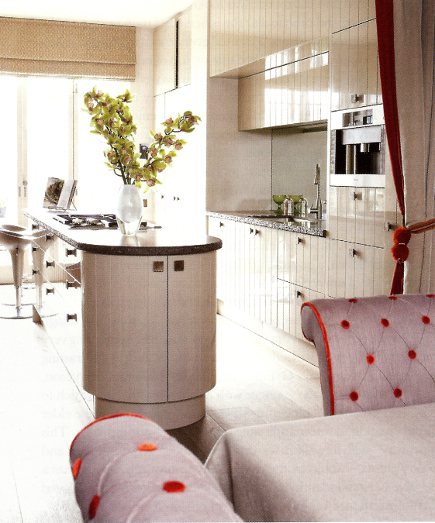 To bring it down to earth, orange is repeated in the piping and buttons of the white-upholstered, button-tufed dining room chairs. Additionally, it’s added to the leading edge of the curtains and on the orange pom pom tieback that softly separate the kitchen from the dining room. The kitchen – open to the dining room — remains monochrome so it’s clear where designer Gytha Bouchon, of Nuttall Home, meant to have things heat up. 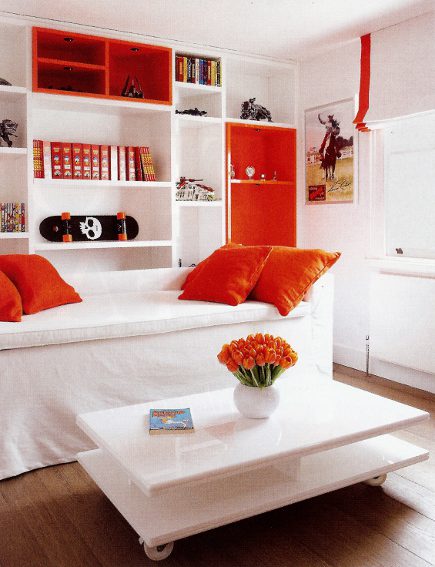 The teenage son of the owner picked the same fresh combination of orange and white for his very sophisticated color-block bedroom. Once you note the presence of a Halloween-theme skateboard in the bookcase, it’s clear that someone easy-going with a sense of humor is in residence.  As cribs go, it’s a wow.

Orange fans might also like Orange kitchens, and a Juicy Color Bath, along with Citrus Color Twists on accessories.