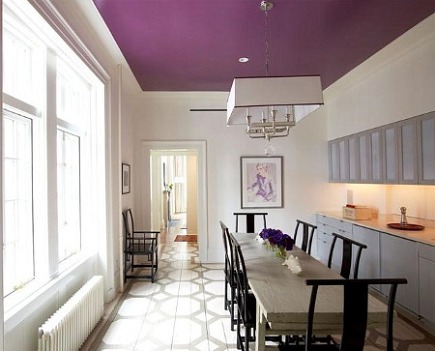 Colorful ceilings make us think about looking at these rooms upside down.

Colorful ceilings are returning after a long pause. Ceilings went blank in the 20th century when building construction generally made them lower, architectural elements became simplified, materials changed, lighting systems were integrated and the cost of elaborate decoration became prohibitive in a majority of homes. Mostly, the focus stayed on the floor.

Today, it’s rare to see color or pattern on “the sixth wall” and even more unusual to see it done as skillfully and successfully as in these two rooms by New York designer Sara Story.  Most designers paint ceilings light (i.e. white) which adds to the illusion of space and gets them out of the way conceptually.  Then the eyes are drawn down through hues used on the floor in furniture, flooring and rugs.

These stunning results show a wonderfully playful way of looking at the entire space, in addition to an understanding of how to make an unconventional treatment work.  In essence,  Ms. Story has put conceptual rugs on the ceiling while adding a light stenciled pattern to the floors.  Try looking at these photos upside down and you will see what I mean. Tension between the two creates a balance in each room which is very different than simply using a color up there for color’s sake.

What is interesting about the violet dining room ceiling is that the strong color framed and contained by the beefy crown molding. This helps create the illusion of additional height even though, in theory, dark walls tend to advance or look closer (or lower in this case).  The rich color also provides a background for the elegant, modern chandelier – I’d love to be in that room at night with the lights turned down low to see the purple aura.  Nor was the designer shy about piercing the color field with supplementary ceiling lights (note the small white baffle towards the back). 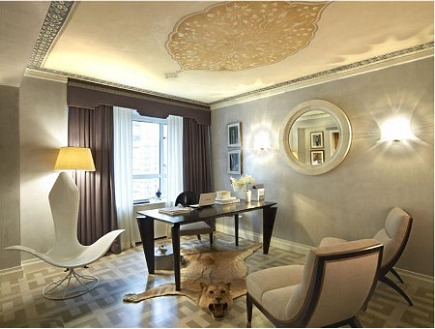 In the modern den, both a center medallion and patterned border motif have been abstracted from an Oriental rug design (no doubt Indian, judging from the tiger pelt) and painted on a neutral field. Since a central chandelier would interfere with the asymmetry of the medallion, cove lighting, concealed in the crown molding, provides illumination and a frame of light for the painted decoration.

We’ve seen memorable ceilings in the Lavender Fantasy Bath, as well as a bold painted kitchen ceiling in the Red Kitchen Features post. The difference, for me, here is that the ceilings are an element of the room – but not the dominant elements. Just look at the floors.