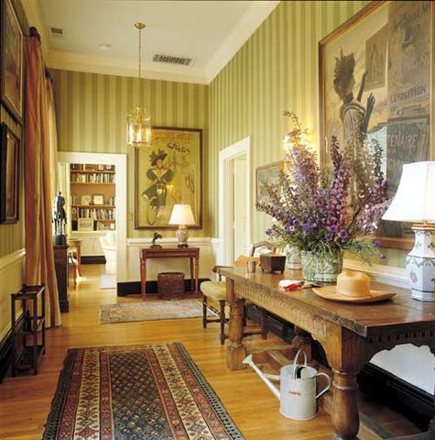 I think of tent stripe walls as pattern on demand in almost any combination for colors.

I love tent stripe walls but gave up using them in my bedroom. A small confession: I had it wrong. I was trying to make awning stripes (also called pavilion or tent stripes) — work in two shades of yellow, a hue that’s difficult enough on its own. Basically, stripes are easiest to do when one is white or pale and the other is very dark – black, brown, forest green (a.k.a. awning), Cabernet, or eggplant. However, I had seen these two shades of green used successfully in this hallway which gave me the idea. (I used striped fabric on the sofa instead!).

Stripe walls work well on stairwells, landings and  hallways – spaces which don’t need to let the eye rest because you aren’t staying very long. On the very traditional landing [top], stripes in two shades of green  emphasize the ceiling height and work well as a background for both the country furniture and 19th century French posters. 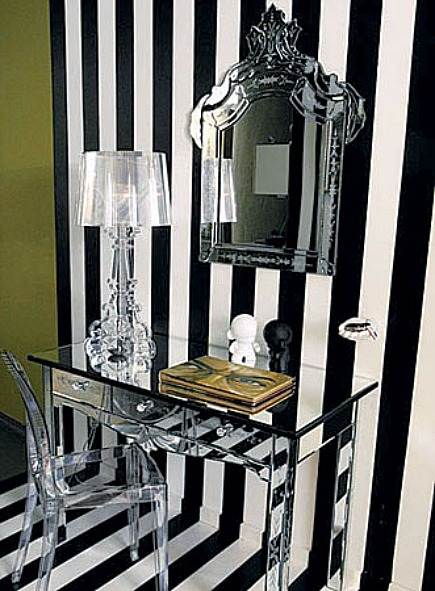 They also  create high energy walls in foyers like this Dallas loft where the black and white stripes started on the ceiling and ended on the floor of the 9 x 10-foot space also furnished with a lucite look including a Kartell Bourgie table lamp and Philippe Starck Victoria ghost chair that nod to the ’70s. 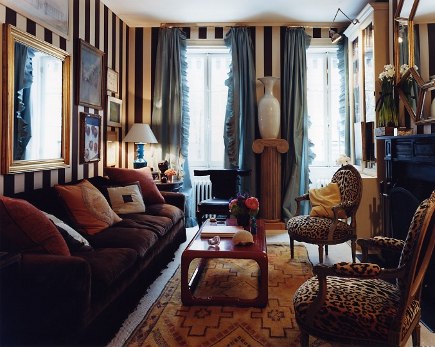 While conceptually color bands are traditional (think Napoleon’s tents) they also provide dynamic backgrounds for modern furnishings  or spaces like this narrow sitting room by New York designer Miles Redd, who might be dubbed the “master of the tent-stripe” since he uses them so frequently and masterfully.