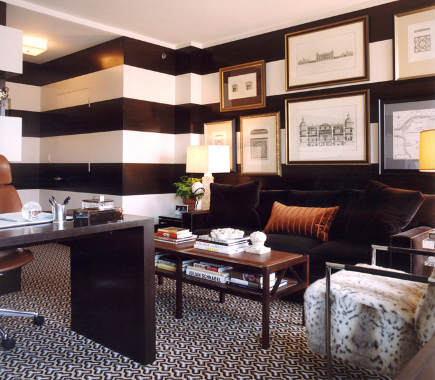 Sometimes it’s difficult to track how we develop our tastes for interior design. There’s certainly nothing in my background to explain why I’m drawn to big bold striped walls except that they look like color field paintings. For me, that may be the point. High contrast, graphic striped walls function like integral art. There’s not much else needed — though that never stopped anyone from hanging things over them.

Whether striped walls are made with paint or wallpaper isn’t a big issue. What counts is the result, readily seen in the man-cave created by New York designer Robert Passal’s for a well-known sports figure [top]. The high-gloss, horizontally striped chocolate and white walls almost have the feel of a racing car. 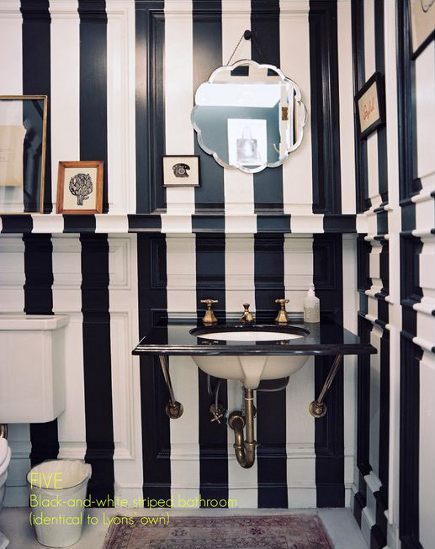 We’ve seen black and white vertical stripes in the past, but the way they are used in this bath shows their true power. Looking closely, it’s clear that the bathroom walls are composed of elaborate paneled moldings as well as a prominent shelf. Features like these are difficult to overpower but the stripes dominate and unify the smallish space. Keeping the sanitary fixtures black and white solidly supports the scheme. 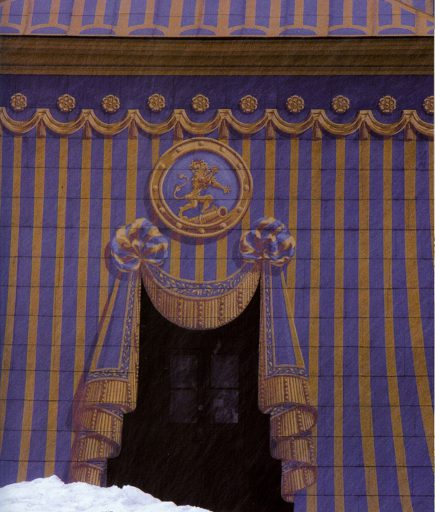 While stripes look modern, they aren’t, as this detail of the painted exterior of the “copper tent” at Haga Park in Solna, Sweden reveals. The building, constructed for King Gustav III around 1790, is made of wood covered with copper and painted to look like a Turkish tent, or pavilion. Striped tents were also associated with Napoleon during the early years of the 1800s. 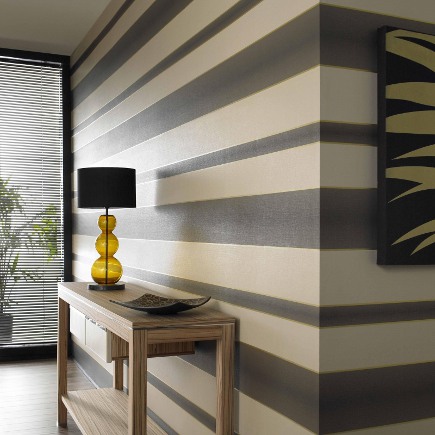 Wallpaper with horizontal stripes and a slight metallic effect from Graham and Brown’s Verve range is modern enough to pair with mid-20th century accessories. It’s also an easy way to add interest to large, unbroken walls or deftly turn a corner to unify two rooms in an open-plan home.

Copy and paste link to quick-share this post: http://bit.ly/R85l4T