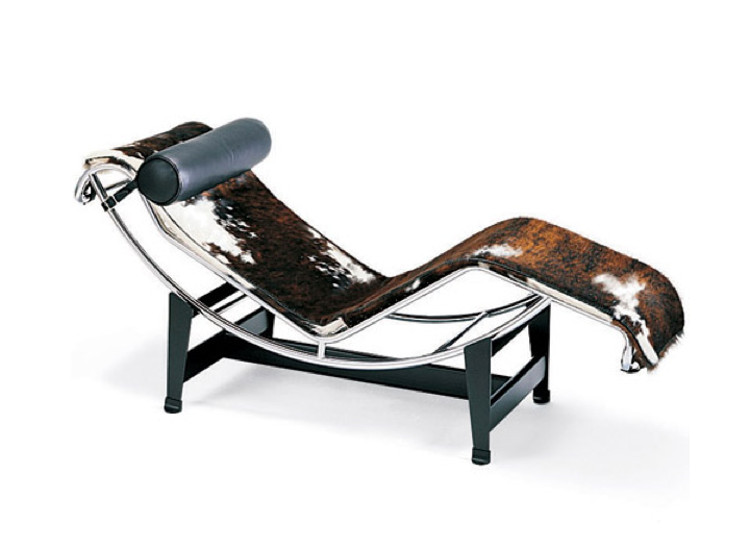 How old are those iconic designer furniture pieces that look so modern? The truth may rock you.

The continuing popularity of 20th century modern designer furniture has led to a kind of visual shorthand. We look at a room and can easily spot a Saarinen table, Mies van der Rohe Barcelona chair, or an Arco floor lamp. It’s the home décor version of recognizing an Hermès handbag, Chanel suit, or Louboutin shoes. And since modern designer furniture is licensed to a handful of manufacturers, you can always buy it new from Hive Modern, Design within Reach, Knoll or Palazzetti.

But what’s old is new again: most of these best loved and most instantly recognized pieces of designer furniture are actually antiques! By that I mean many were originally designed 50 to 80 or more years ago. Yet these design icons are forever young in spirit and still may be too modern for some tastes. 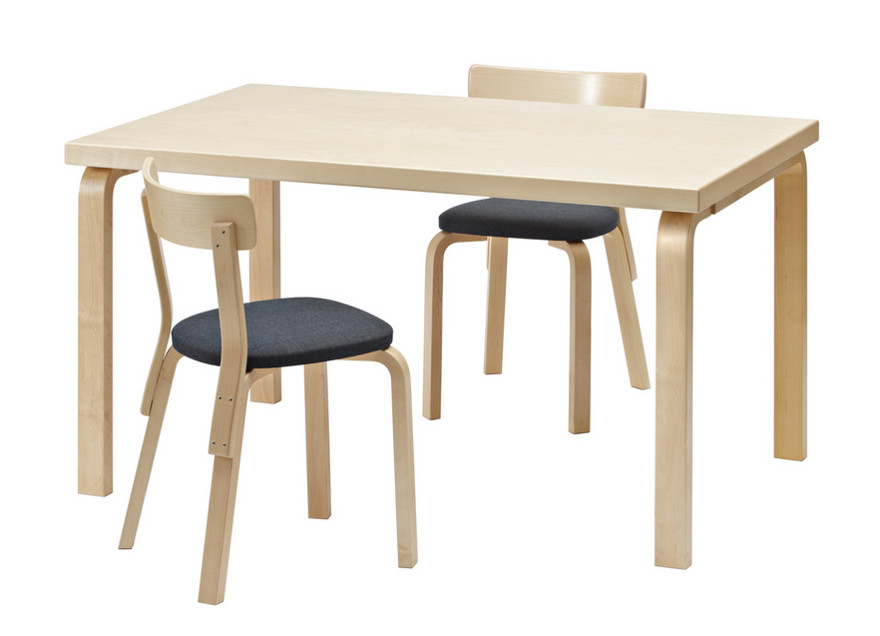 The first furniture I ever bought was modern. My first dining room table was Alvar Aalto’s 1935 Table 82 [above] though I bought different chairs. Made in Finland of birch plywood and veneer this table is 80 years old! At the time, Aalto invented an influential process for bending birch which gives the table its graceful skeletal legs. The top is a 2-inch slab of birch with other optional finishes. I chose white laminate. Aalto, born in 1898, died in 1976 and is one of the leaders in the 20th century Scandinavian design movement.

The greatest 20th century architects often designed furniture for their residential clients or for manufacture and sale. Italy was one hub of furniture production and the iconic Cassina Masters Collection of furniture includes Le Corbusier’s LC4 Chaise, 1928  [top]. Designed in collaboration with Charlotte Perriand — yes, in 1928 — the chaise has a chrome frame and is upholstered in cow hide with a black leather head roll pillow. Not a bad look for an 87-year old, right? 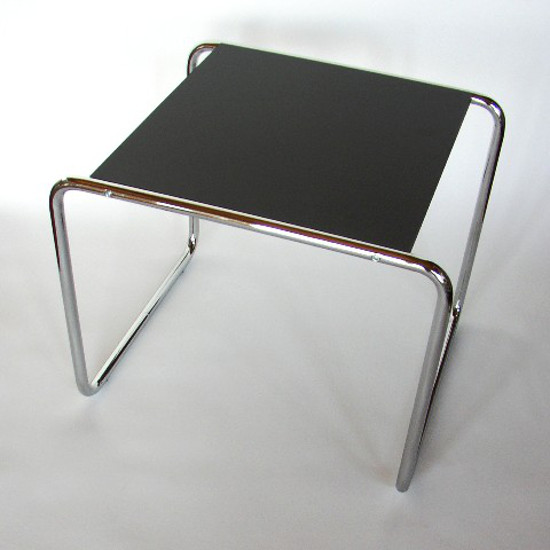 Nesting tables are not a 20th century invention but the form was brought to a streamlined height in Marcel Breuer’s 1924 Laccio Small Table. I always saw these as side tables or in pairs in front of a sofa. But, in fact, the architect conceived this to be used together with a lower rectangular table of the same design — sort of a mix and match idea. Imagine how that looked 91 years ago. For me, this 21.75-inch by 19-inch table, is 17.75-inches high — a perfect height when someone is seated and is the idea side table. Made of chromed tubular stainless steel (which expressed Breuer’s furniture aesthetic) , the top is matte stain finish black laminate. Made by Knoll, in the U.S.A., each table is signed and numbered. In addition to his tubular steel furniture, Marcel Breuer is best known as the architect of the Whitney Museum in New York.

It doesn’t seem like an exaggeration to state that Ludwig Mies van der Rohe’s 1929 Barcelona Chair and Ottoman, are the most famous pieces of seat furniture of the 20th century, designed by its most influential architect. “Mies” emigrated to the U.S. in 1937 to escape the Nazis in Germany. But his generously sized chair and matching stool debuted at the 1929 German Pavilion at the International Exhibition (World’s Fair) in Barcelona, Spain. It is said that the chair was conceptualized as modern throne for the Spanish king and queen with the stool as seating for their attendants. I’ve seen original handmade Barcelona chairs in German auctions, though they are rare. Otherwise, the steel frame chairs are trademarked by Knoll and made with seat and back cushions fashioned from single pieces of brand-name leather, hand tufted and welted according to the designer’s original detailed specifications. The octogenarian Barcelona chair has been in the Museum of Modern Art collection for 38 years. 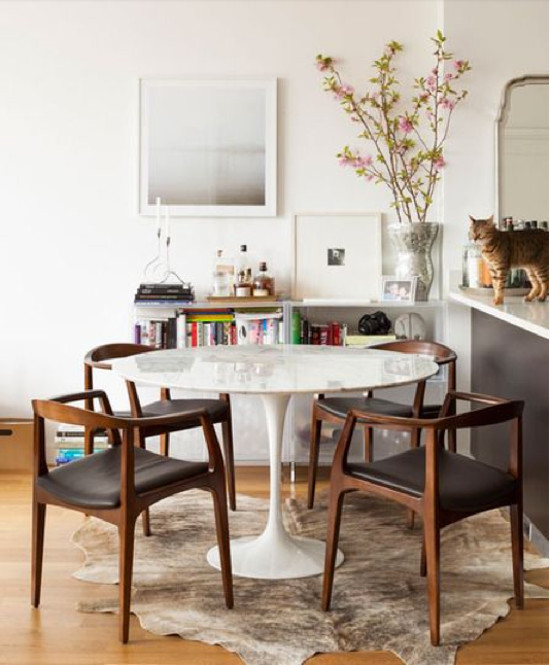 Back in 1958, Time Magazine quoted architect Finnish-born Eero Saarinen as saying that he was designing a new collection of furniture to “clear up the slum of legs in the U.S. home.” While that may sound arrogant, Americans get it. No table appears more frequently in contemporary home photos today than Eero Saarinen’s 1956 Pedestal Dining Table (often called the tulip table). The graceful, tapered cast aluminum base has an abrasion-resistant finish. The tops vary from Italian marble, to wood veneer and laminate. There are matching chairs however most any chairs can be used around this table today and examples abound. This table also is a favorite for Contemporary Kitchen Banquettes. At 56, the table is junior to other designer furniture and while it qualifies as an “antique,” no table has yet to replace this widely loved and versatile piece, here paired with Scandinavian mid-20th century wood frame chairs. 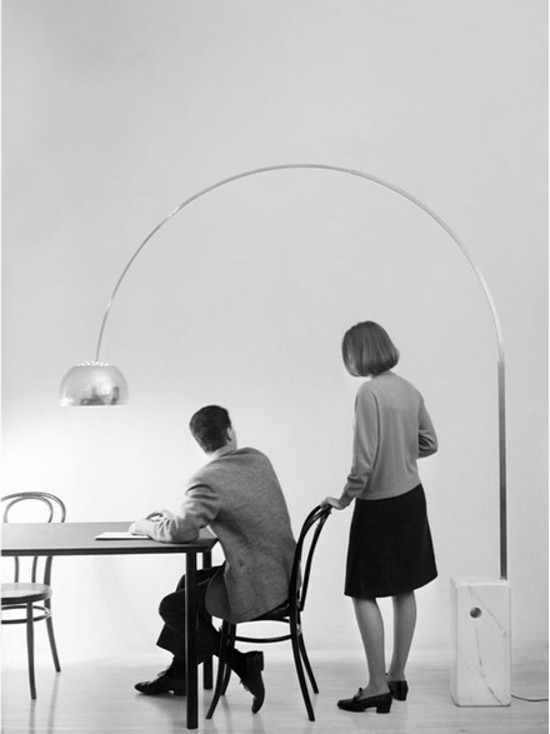 The colossal size of the 1962 Arco Floor Lamp has not been equalled since Achille and Pierre Giacomo Castiglioni designed it for Flos. Inspired by a street lamp, the Arco is anchored by a marble base drilled with a hole so it can be moved with a broomstick. But the scale of the lamp helps make it remarkable — at 95-inches high it is almost 8-feet tall. A person can walk under the arc, which has a 78.6-inch reach — approximately 6-1/2 feet. “Nothing in Arco is decorative,” the designer once stated. That practical aesthetic continues. Although the original debuted 53 years ago, the Arco now is adapted for LED bulbs. 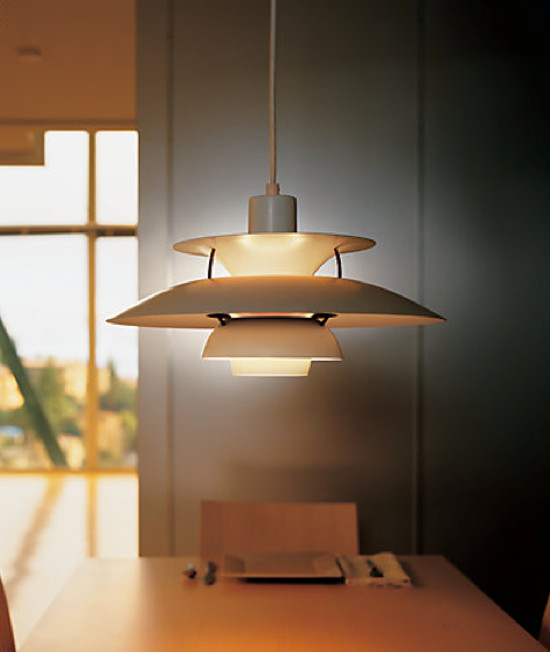 As pendant lamps go, one of the most enduring is, without doubt, Poul Henningsen’s 1958 PH5 Pendant Lamp. Apart from its elegance, a unique feature of the pendant design is that it directs light in two directions — horizontally and vertically — at the same time. And while it cannot be seen easily, Henningsen’s knowledge of the incandescent light spectrum led him to have primary red applied to the inside of the center cone and blue applied to the smallest reflector to balance the light from the bulb. The spun aluminum pendant is fitted with a sand-blasted glass inner shade and has been made in Denmark by Louis Poulson for 57 years. The 20-inch width makes it equally fabulous used singly or in multiples. 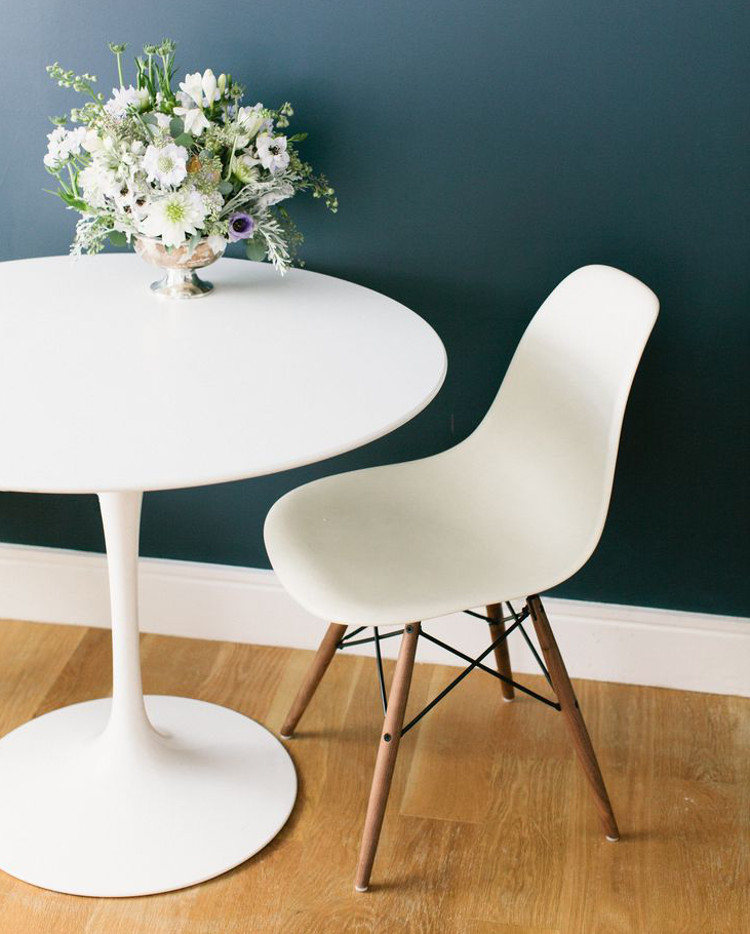 Like the Saarinen table above, and also pictured here, few classic modern chairs are seen as often today as the 1951 Eames Molded Plastic Side Chair. Enduring as a standard dining table chair the base style varies. This one is the Dowel Leg Base, or DSW: short for dining height, side chair, wood base. The husband and wife team of Charles and Ray Eames, who lived and worked in Southern California, were masters of colorful furniture and the wide popularity of the chair no doubt stems from 13 different color choices. Originally designed as a metal prototype for an international competition for Low-Cost Furniture Design held by the Museum of Modern Art in 1948, the seats were changed to fiberglass in 1950 and today are manufactured of recycled polypropylene — a triumph of comfort and color for 61 years. 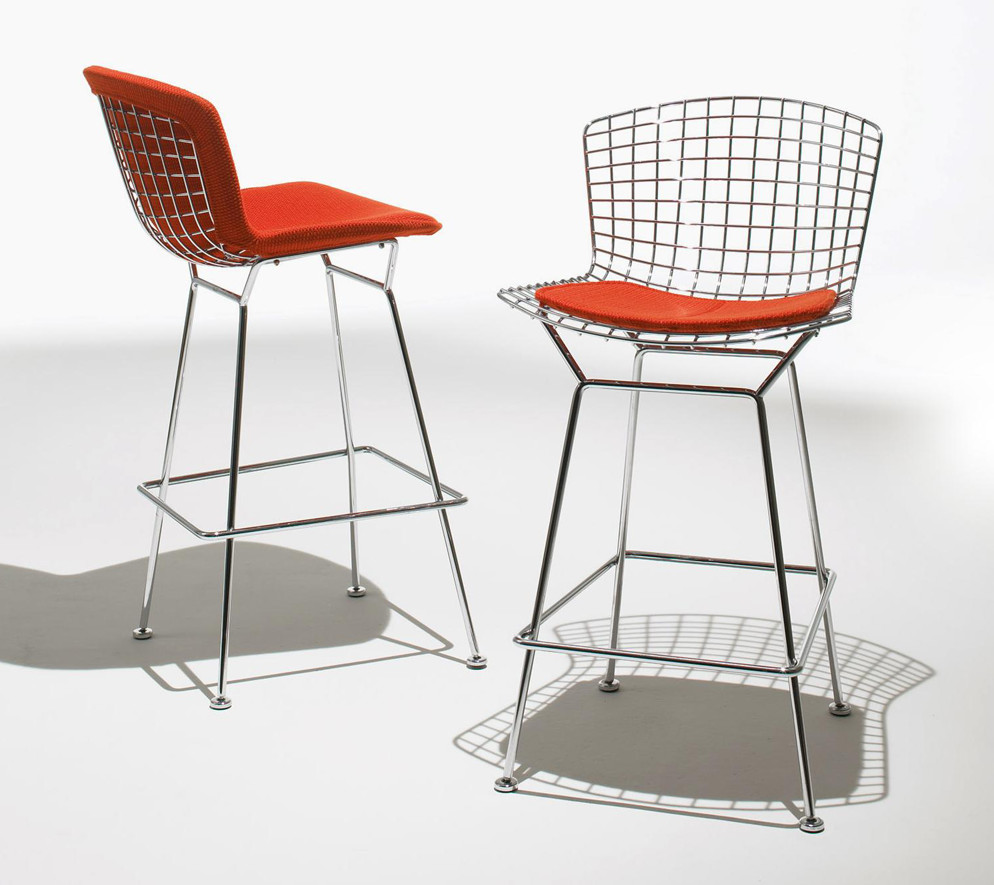 In 1952, Harry Bertoia created a collection of furniture for Knoll based on industrial wire rods, including the Bertoia Counter Stool. “If you look at the chairs, they are mainly made of air, like sculpture,” said Bertoia. “Space passes through them.” That combination of strength and light scale has made the stools a favorite choice of architects and designers for kitchen counter seating for 63 years now. Seat pads in vinyl (7 colors), classic bouclé (5 colors) or ultrasuede (4 colors), add an element of comfort to the stools in addition to the sculptural backs. Widely knocked off, authentic Bertoia stools are Italian-made. 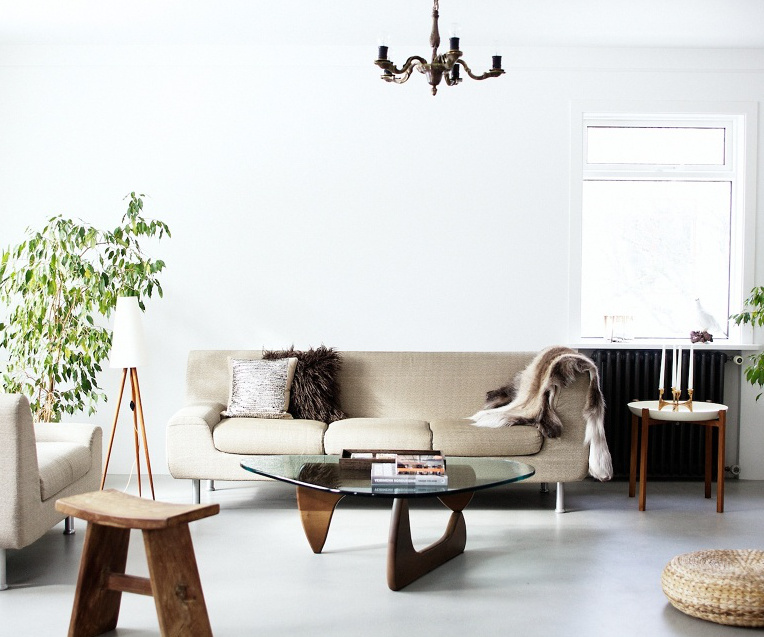 Perhaps the most seductive coffee table ever designed is Isamu Noguchi’s Coffee Table, 1948. The famed sculptor was a disciple of Brancusi but began to create furniture for Herman Miller during the Second World War. Simply called the Noguchi Coffee Table, the sculptural base is unerringly simple and naturalistic — two pieces of interlocking wood that support a 3/4-inch thick glass slab. The base comes in walnut, natural cherry, white ash (treated to avoid yellowing) or black and the edge of the glass top bears the sculptor’s signature. The table is made in the U.S.A. A knock off of Noguchi’s table base is now sold by Target with a table for under $200. After 67 years this might suggest progress or a setback for any design. But something tells me that Noguchi, whose Long Island City studio is now a museum dedicated to the artist’s life and work, would not be amused.

Copy and paste link to quick-share this post: http://bit.ly/1MEKmm2