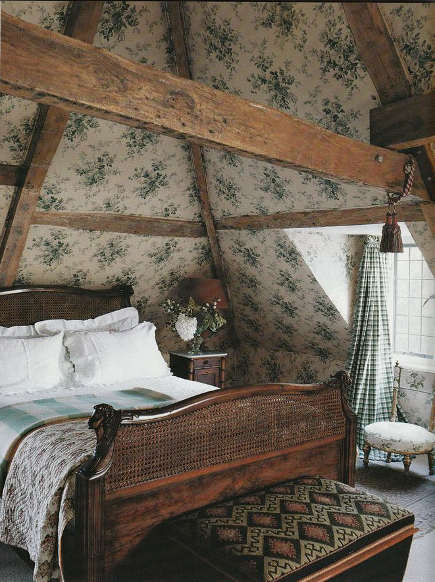 Pattern can be key to creating a charming attic guest rooms in old or new houses.

Full-story attics, in old houses, often housed storage rooms or servants’ quarters where slanting ceilings and small windows weren’t considerations. Those bedrooms were principally occupied at night. Over the last fifty years, many top-floor spaces have been modernized and converted into usable room of various types. Chief among these, I’m finding, are attic guest rooms where architectural quirks are often diminished or neutralized by introducing pattern on the walls. Most often, pattern is provided by wallpaper but fabric also can be backed in various ways and applied to walls and ceilings with the same effect.

In the attic guest room of Hall Place [top], a manor house southwest of London, decorator/owner Minnie Montague encountered 18th century wood beams on the top floor. Rather than painting them out to lighten the look, the beams were left au naturel — pointing up their patina and age. A conservative blue rose floral print fabric was worked around the beams to create the look of lush upholstered walls. Even when the print is interrupted by beams, the continuous pattern helps unify the sections and help integrate the small, low window. With the dark wood bed and other traditional accessories, the guest room looks cozy and warm. In a departure from full-on 18th century style, where the same floral fabric would be repeated on the bed and upholstery, there is a contrasting small-scale check used for the drapery plus a large blue-and-white windowpane plaid blanket. Ironically, the large double-tassel cord, hanging from the cross-beam, almost could be mistaken for a bell once used to summon servants. 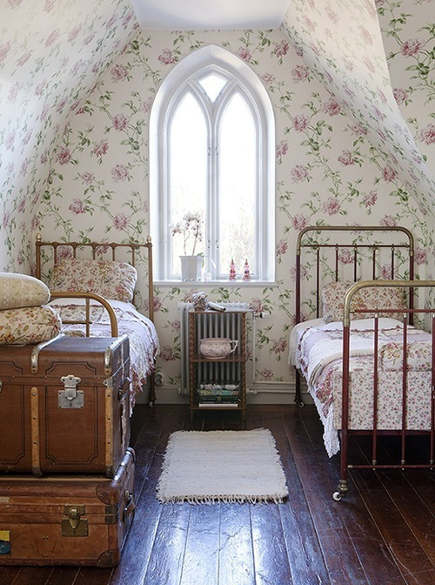 Surely this snug. narrow guest room — with a Gothic window and old-fashioned radiator — was a bedroom for domestic staff. It is just wide enough for vintage metal twin beds with a tiny table between them. Chintz wallpaper, with meandering pink roses on a white ground, actually helps make the room look wider despite the deeply slanting eaves. Notice that the pattern repeat of the green stems and foliage form subtle diamond shapes visually widening the wall and offsetting the window’s verticality. Painting the patch of ceiling white supports the airy look. 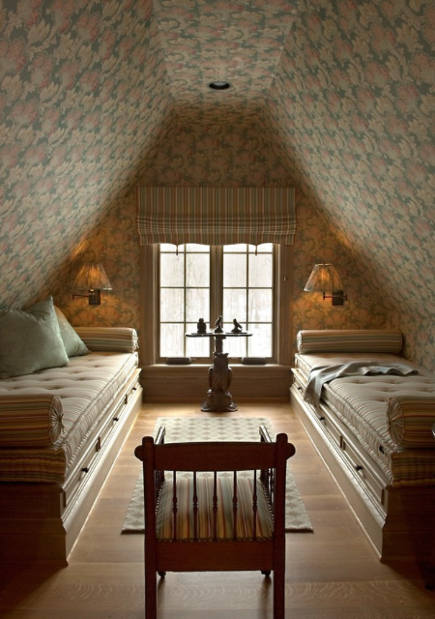 In the hands of designer Barry Dixon, a similarly narrow, attic guest room is given an all-over pattern treatment adapted from 18th century design. Wide enough to only support twin beds, this room also has natural light from a window on the short side. Unlike the Gothic window (above) this one nearly sits on the floor. A cream and peach floral print on a green ground is one of two patterns. The print wraps the walls and ceiling. Matching fabric was used to create shades for the swing arm lamps, so they nearly disappear. A striped companion fabric, in the same colorway, was chosen for the Roman shade and the upholstery — less of  a match but one all the same. A pair of platform daybeds, with morgue drawers, were built in and topped with French mattresses and bedroll bolsters on each end. The lack of traditional bedding keeps things neat and formal, as if this were a sitting room that merely doubles as a guest room when necessary. 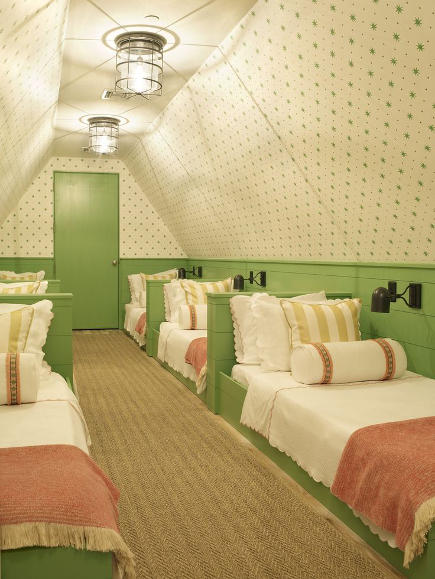 This Coastal Living showhouse attic guest room is the creation of Urban Grace Interiors in Florida. So it’s no surprise that the cheerful peach and green color scheme looks a little tropical even in a room crowded with bunk. Almost shiplike, the narrow room has half a dozen head-to-toe built in platform beds. Marine style ceiling fixtures, from Circa Lighting, enhance the look. Here, too the designer has chosen to go white on the ceiling while the walls are covered with a small-scale green star print on a white ground. The Pratt & Lambert green waincot that also serves as side paneling for the one-side in beds creates a strong horizontal that helps keep this busy room from looking overstuffed. 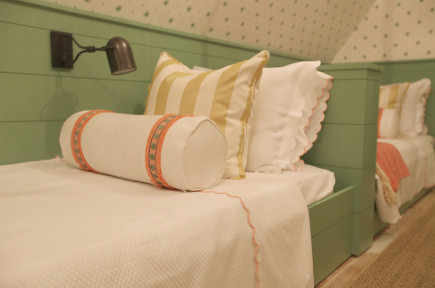 Oil-rubbed bronze finish swing away lamps provide individual illumination for each bunk but won’t smack anyone in the face in the middle of the night if pushed back against the wall. They are perfectly placed for reading. Frilly bedding, with Sunbrella fabrics, helps keep things from feeling too Army-Navy. 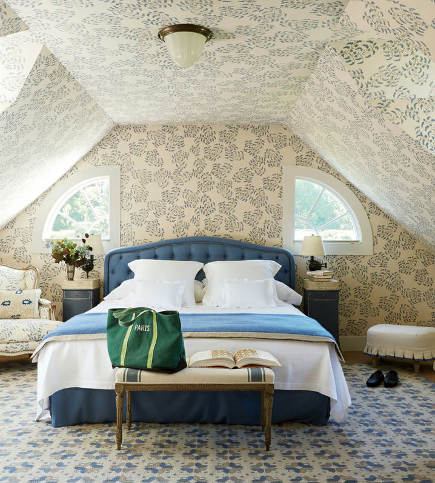 In an early 20th century mansion on New York’s Long Island, a top floor guest room with quarter round sunburst windows and sloped ceilings was renovated and modernized for guests by designer Frank de Biasi. An appealing, abstract blue and white print was used on the walls, ceiling and chair upholstery in opposition to the geometric print broadloom carpet. The upholstered headboard and bed skirt are a solid dark blue and, centering it between the windows, helps make it a focal point of an unusually spacious attic guest room.

Copy and paste link to quick-share this post:  http://bit.ly/1o6S13G