“If you group like objects instead of scattering them around a room, they will have more impact.”

In her latest book, Suzanne Kasler: Timeless Style, Atlanta’s leading interior designer explains the way she likes to display art and collectibles. The point is impact, as she says (above). And so it goes with this book: the 300 photos of eight houses she decorated clearly communicate her design aesthetic – traditional, palette-driven, high-end, architecturally detailed, well lit, and lush.

The entry hall in Ms. Kasler’s own home [top] features a white Bulgarian limestone floor set off by a black-painted stair rail and baseboard. An exemplar of the composed elegance she favors, it kicks off a 55-page tour of her personal space. 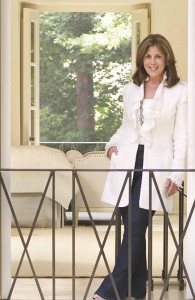 “I don’t know many people who limit themselves to one era,” Ms. Kasler writes (with the assistance of House Beautiful’s Christine Pittel). Minimalists are not her market. Important houses with an antique-and-modern mix, European aspirations and luxe appointments – plus American furnishings she creates for Hickory Chair, Lee Jofa, Visual Comfort and others – fuel her considerable success. And, as her fans know, this is a second outing. A first book “Suzanne Kasler: Inspired Interiors” dates from 2009.

I am woefully late in getting to this review, for which I apologize. The book was published last fall but life intervened. So in the early calm of the New Year I was finally able to sit back in my purple wool armchair, plop my feet on the ottoman, and cradle the book in my lap. I love the gorgeous paper and the stately design by Doug Turshen and David Huang. It looks and feels like twice the price.

My policy is to write only about designers whose work I admire. Given that criterion, each author offers a different quantity of “takeaways” for readers seeking guidepost concepts, access to a list of upper eschelon trade sources, and visual inspiration. I love detailed captions in books (and magazines) with information that anticipates and answers my questions. Timeless Style is a treasure box of high level of sourcing – for once a designer is confident enough to let us in on every photo!

We have featured Ms. Kasler’s work in five previous posts. She often opts for “the one true kitchen” – a.k.a. all white – but with a happy injection of color. In her own home, she explains “I knew I wanted lavender for the linen slipcovers…Sometimes it looks more lavender and sometimes it looks more plum. It also has an undertone of gray which gives a color more depth.”  Wide-plank walnut floors, a Cornue Fé range (partially hidden), paneled refrigerator and marble-topped island with specially grooved edge are other noteworthy features.

A white kitchen for an Atlanta client has planked walls and ceiling plus an industrial edge provided by the steel range hood and cone-shape bronze pendants. Kasler kitchens often have the main sink in a marble-topped island opposite the range. Bar stools are another standard, these cloaked in tobacco linen. This island also boasts a crossbuck (X) motif on the end which adds visual interest and support for the section of the counter unsupported by a cabinet.

The way Ms. Kasler loops us into her creative process is illustrated by a cream and beige Greenwich, Connecticut family room. Her focus is, primarily, the orange accent pillows on the George V natural linen-covered sofas from Holly Hunt. “When you analyze it, the orange is only In four pillows and a [sic] Hermes blanket,” the caption says. But here comes the gem: “It’s a tall room and I decided to break up the length of the curtains with two colors. The block of blue-gray linen at the bottom anchors the room and creates a virtual wainscoting.” (Note the chair backs fall just below the height of the drapery color block.) At last, a how-to that’s not a tutorial.

Kasler posits that the appeal of traditional décor is its familiarity. And by including an extensive showing of her own home, she clearly explains what she loves – Fortuny fabric, curtains that puddle, silvery blue, tangerine, lavender, little-girl pink (in a guest room), theGreek key motif, mirrors, gilt and Eiffel tower statuettes. In her mind, living with the things you love defines your own style and makes it timeless.

Copy and paste link to quick-share this post:  http://bit.ly/1c9L3Or