You are here: Home / Decor / Color / Paint It Black – Whys and Why Nots 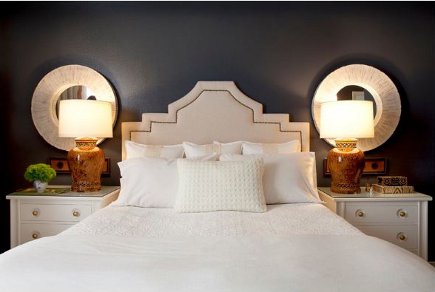 The likelihood knowing two people with black rooms in their homes is relatively high. Since I’ve written at least four pieces on black wall murals, kitchens and bathrooms, it’s safe to say I’m a fan of the look. But ten years ago, a black room was something you’d expect at Cher’s house – a Goth statement certainly. Today, midnight walls are mainstream. Why? High contrast = drama as this knockout bedroom with a wonderful fancy white shaped headboard, matching nightstands and mirrors by Domicile ID reveals. Black seems to work best in spaces where prime-time usage is after dark and bright light is not needed. I wouldn’t want it in a sewing room but it made a surprisingly great children’s blackboard playroom. 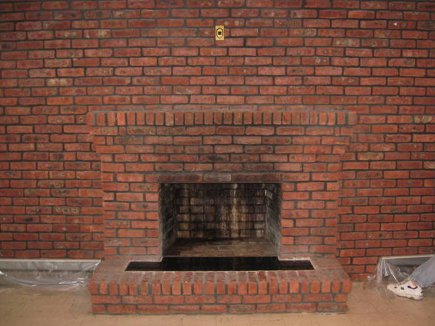 Recently, our friend Robin modernized a brick wall in her family room. This is Robin’s 60’s brick fireplace wall before. 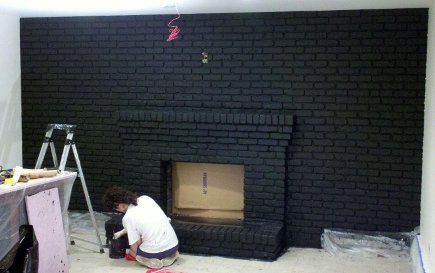 And here is Robin, just after putting the finishing touches on the transformation, which she did with Benjamin Moore’s Aura Matte black.  It hardly looks like the same space  — why I always swear by paint!

As Robin’s wall shows, black hides well, causing irregularities  to disappear. This can be very useful when proportions on a wall or ceiling are unequal (not the case here).  The lack of color has a significant modernizing effect, which is why black is so often the default for contemporary furniture, appliances and architectural materials. It is also neutral. As we know, everything seems to go with black.

Despite all the pros, there are a few drawbacks. Even paints with superior hiding qualities require flat walls to be in good condition before being painted flat black, which will burnish thus showing up marks and bumps as texture — which works well in the case of brick.  Black walls absorb so might light that it’s often necessary to compensate with general lighting, particularly from the ceiling. Light from sconces and lamps will be less effective in very dark rooms.

Some people love dark spaces and don’t care for bright light, even during the day. My bias is the opposite but I can appreciate the need. Still, dark rooms can get tricky in Europe or the northern United States where natural light is greatly reduced during the late fall, winter and early spring, and should be carefully considered. 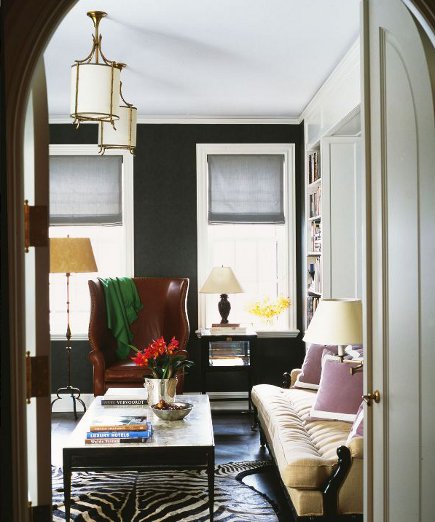 Even TV designer Nate Berkus has gone dark, adding a jaunty zebra-stripe floor covering that picks up the pace of the look. His room reminds me also of our pal Brandy’s dining room, which, if I recall, also has white trim and wainscot. It’s a great way to push a transitional space into transitional gear.