What does America’s decorator-in-chief tell us about designing these two key rooms in his new book?

I became a Michael S. Smith fan by seeing an abundant amount of his work in home design magazines over the years. I’ve especially admired his kitchens and baths along with his line of sinks, faucets and fixtures for Kallista. I’ve also been honored to feature some images of his projects here and they are among my favorites. The white family kitchen [top] with its massive island hood and Ann-Morris Antiques pot rack in a Malibu home is typical of his graceful style.

So I was naturally eager to read his third book “Kitchens and Baths,” (Rizzoli, $45) published just last month in the collaboration with House Beautiful magazine senior editor and writer Christine Pittel who shares authorship. 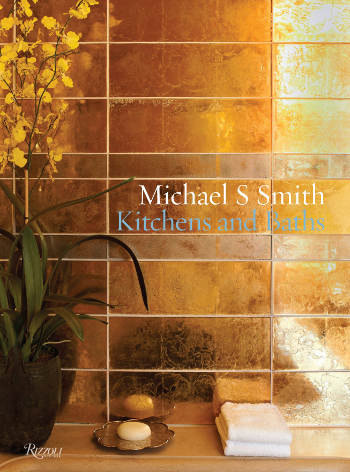 Dividing houses into three general categories – Beach, Town, Country – the book documents his artfully designed kitchens, bathrooms, dressing rooms and adjacent spaces from Malibu to Montana, Manhattan to Mallorca. While I rarely review books, I wanted to know more about how Smith approaches these two key rooms, which are a special focus for us here at Atticmag. I was eager to know which ideas he feels are most important, and why he makes the specific choices he does for each house. I also must confess to not having read his two previous tomes, also for Rizzoli, 2007’s “Elements of Style,” and “Houses,” from 2008 so I was hoping to learn more about his personal story in terms of how it shaped his taste – to see what in the process of creating a home ambience makes sense to him and why.

Top tier interior designers are often defined by their even more prominent clients, especially in Los Angeles and New York. So back in January of 2009, when the 47-year-old Californian was chosen by President and Mrs. Obama to redecorate the White House, an already robust and distinguished prize-winning career was capped. Then last February, 2010, Smith was appointed by President Obama to the Committee for the Preservation of the White House. Quickly said, Michael S. Smith is America’s decorator-in-chief.

So it’s admirable that Smith – whose photos bear a slight resemblance to the British actor and “The Mentalist” star Simon Baker – found time to publish a new book. 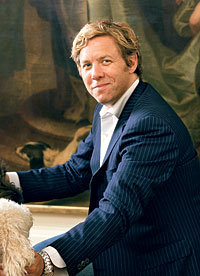 With a bicoastal business (he divides his time between Los Angeles and New York), home product lines and licensing partnerships, he’s a decorating Olympian. The website describes his general style as a blend of “European tradition and American modernism,” which it is on the highest level. In Los Angeles, movie-money clients provide stratospheric budgets for gut rehabs by celebrated architects, the finest antique furnishings, amazing fabrics, reclaimed building materials and the coolest fixtures. The goal is often to infuse a home with a sense of cultured architecture, fine art and patina — from scratch, which Smith can deliver. On the East coast and elsewhere, it can be about making older structures more modern and livable for equally high end clients.

My point is that Michael S. Smith shows us important, super-budget homes and the best-of-the-best – both normal in his world. His sources are exclusive and fabrication frequently custom although he is known for also sourcing from Pottery Barn and Urban Outfitters. Therefore, readers who will be offended by a “lifestyles of the rich and famous” document should go elsewhere for inspiration. Those of us who love to drool, or reinterpret for ourselves, don’t mind.

Many of the photos included in the book are of kitchens and baths already familiar from  magazines, albeit without Smith’s first-person commentary and sourcing. One kitchen I hadn’t seen before is in a comparatively new house in Mallorca. To give this room its wonderful sense of historic place, Smith found 17th-century Hispano-Moroccan tile in Toledo, Spain and had it copied down to its incised green-blue-yellow pattern. Existing cabinets and typical terra cotta flooring in the kitchen were preserved, while upper cabinets along one wall were replaced by open shelving. The designer tells us that antique Spanish chairs were imported from California because with antiques “the country of origin will usually hold it in higher value” then upholstered with a divine vintage-look print fabric from the French house of Prelle that enhances the tile with perfect pitch. The breakfast table was found in London and the English-style lanterns over the island were made in California (dare I mention that they appear to be copies of an antique British lantern in  Cindy Crawford’s dining room, also pictured in the book on page 52-53?)

For me, the strength of the book lies in the presentation of Smith’s big ideas and turning points of style. About kitchens he writes:

And like many of us, he makes it clear that he pays attention to movie decor. How delightful! But always, there’s the story of the house. For a palatial home in Laguna Beach, California, the clients wanted the spirit of villas on Italy’s Amalfi coast, with “stone, stucco and massive beams,” Smith explains. In the kitchen, that generated a fabulous marble farm sink of a size one would indeed find in an Italian castello, plus an industrial high-arc faucet. The floor is reclaimed stone from Exquisite Surfaces, and the island, made to look like an antique table with turned legs, includes a copper prep sink. “Upper cabinets would look too suburban,” the designer explains “so we did open shelves…” alongside the 60-inch La Cornue Chateau range “the Rolls-Royce of kitchen appliances” with a matching hood. He sees the contemporary pendants lights by Alison Berger hanging over the island as a point of fusion between old and new.

Smith’s iconic white marble bathroom is one of those classic arrangements with universal appeal. He feels the glamorous 1930s style, immortalized on film, in a Manhattan hotel-apartment bathroom based on Selena marble with green and gold veining from Ann Sacks (a favorite source).  A border of polished Costa Esmeralda granite from Artistic Tile inset in the Selena floor adds “special detail.” To crank up the illusion of space, a mirrored dressing table opposite the sink wall is also mirrored in it. Twin basins occupy the double console with nickel “walking- stick legs” topped by Smith’s own Kallista Town faucets.  Imposing Berling sconces from Ralph Lauren Home are mounted on the mirror while exposed plumbing below the console yields an open, old-fashioned look that Smith favors. “This was an era that predates the more suburban built-in vanity,” he says.

Then there are the freestanding tubs. For a “her” bath in a 19,000-square-foot Malibu home with dual masters, Smith chose Urban Archaeology’s Mercer  paired with fixtures from Waterworks Etoile range. “When you make the tub the centerpiece of the room,” he explains, “it’s a very powerful gesture.” In this case, one bolstered by a travertine floor and an ocean view framed by Fortuny cotton curtains. Overhead, an Egyptian chandelier hung with glass vases contributes to the unique ambiance. On the other side of the spa, an onyx-walled shower says luxe in a very singular way. “Onyx,” Smith says of the same highly figured stone used in his own Bel Air bathroom  “is cheaper than a Jackson Pollock [abstract expressionist painting] and it can have a similar effect…”

It could be said that a designer’s home is key to revealing his most personal taste.  However, the section on Smith’s 1950s Bel Air ranch house, that took four years to renovate in an English-leaning style, is identified so elliptically, the assistance of Miss Marple is required to ID it as his. Ditto for the charming little Laguna Beach bungalow that he merely hints at owning. So, oddly, I learned more about America’s first decorator from magazine profiles and a recent brief Q&A in Food & Wine magazine (where he admits he is obsessed by counter tops and his are zinc, though not in Bel Air or Laguna) than I did from his own book. Kitchens and Baths pulls his greatest hits together admirably and provides insightful, useful commentary on each picture along with desirable open-source inspiration. Yet it exudes distance. So while can see that Mr. Smith went to Washington because he’s a blazing talent, we are left wondering about what he experienced to shape his vision along the way. Perhaps he will let us in on that next time.

Copy and Paste the Link to Quick-Share this Post: http://bit.ly/w1UmaO