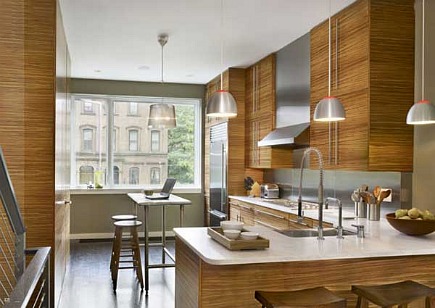 For modern zebrawood kitchens, there is a dramatic choice of wood, whether it’s the star of the kitchen or playing second fiddle.

Zebrawood kitchens are relatively rare. In a historic Philadelphia townhouse, zebrawood veneer is a show stopper on the cabinetry. But it doesn’t end there.  The opposite wall (and door) is also finished in this exotic striped African hardwood, turning the corner into the stairway area.  The rest of the kitchen selections act as neutrals.  The counters are honed Carrara marble.  Stainless steel finishes on appliances, light fixtures and the undermounted farmhouse sink, completed with a pair of Dornbracht faucets, stay in the background.

A dramatic mix of dark grains and golden highlights, dense African zebrawood became popular for those who appreciate an unusual grain. But as an endangered species, prices soared and alternatives were created.  An engineering process that combines faster growing trees, such as poplar, basswood and linden, are made into solid laminated blocks then dyed to create the zebrawood pattern in a high quality veneer.  Quarter-sawing maximizes the contrasting pattern and minimizes warping. 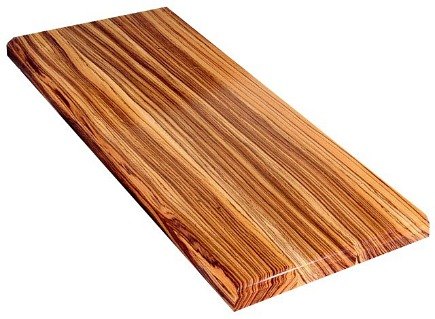 Zebrawood is a striking alternative for countertops.  Streaks of dark brown to black veining, alternating with golden yellow, gives it the namesake striped appearance. Patterns can very considerably and, over time, the material will darken. The alternating hard and soft grained materials can create an impressive counter. But for cabinets, veneers is just as attractive and far more practical. 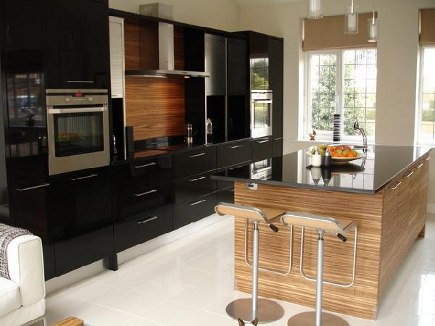 Zebrawood, or zebrano, is often mixed with black. This modern kitchen, featured in the Black Lacquer Kitchens, post shows how it was used on the island and as a backsplash on the range wall.  Zebrawood is a daring selection that will create an exciting modern space.