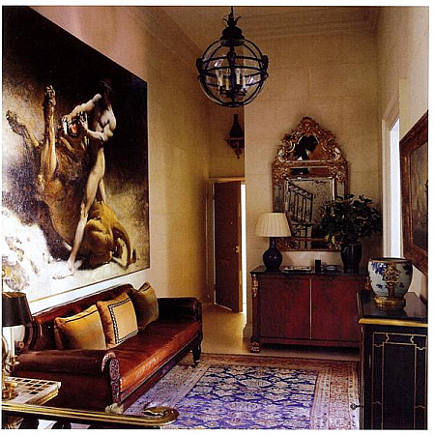 Four ideas to take away from the English accent décor in a London house designed for  instant patina.

Longtime clients of Michael S. Smith gave America’s interior designer-in-chief six months to put together English accent decor in their town house on Eaton Square in London. With the directive of designing  “a home of connoisseurship in which the likes of Noel Coward and Cecil Beaton would be at home,” Smith was focused on traditional European décor. Given the presumptive tone of that directive from clients who had been living in L.A., we dare say we smell movie money. Naturally, the owners gushed over it saying “Michael teaches you so much during the search [for furnishings and art]. His depth of knowledge and sense of history is phenomenal.” You betcha.

I’m a fan of Smith’s interiors and if anyone could pull of a virtuoso job in record time it would be he, as the photographs prove. So while this house is downright plummy and we expect the budget was otherworldly, it warrants a look for speed of assembly and some very interesting ideas.

The grand entrance. Entry halls are a favorite topic — as the first glimpse of a home they inevitably set the tone. Often, grandness can be created by scale. Here that relates to the 7 x 8-foot oil  “Samson’s Youth,” painted by Leon Bonnat in 1891, which hangs over the sofa. With its super size and dramatic imagery, French 19th century French academic paintings have become chic recently although it’s necessary to be well-versed in the Bible and the classics to understand the stories.

Placing a leather Victorian sofa in front of such a painting reinforces the baronial effect together with the antique indigo-field Oriental rug (perhaps a Lillihan?).and a handsome Mask Globe Lantern Light fixture (about $7664) from a Jamb, a source Smith admires. An antique mirror and two additional chests all send the message of important décor to come. 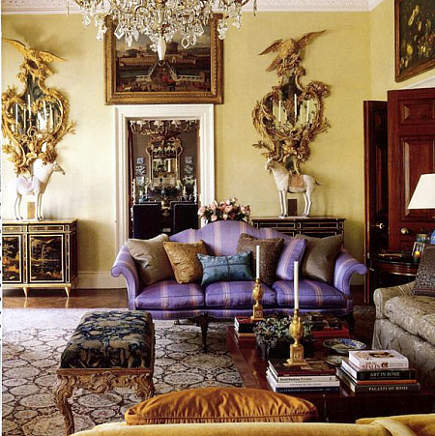 A chic color for upholstered furniture. A Georgian sofa is always serious business but Smith prevents it from taking a dreary turn — without underplaying the pedigree — by covering it in a lively, violet striped silk. Purple couches continue to crop up and they especially love them in London (considering the color’s significance).  Venetian plaster walls provide a backdrop for three pairs: Chinoiserie black lacquer chests, horse sculptures, and Rococo parcel-gilt mirrors placed at each side of the doorway to a reception room, and framing it. Additionally, a painting over the door helps draw attention to the elegant sight line into the next room where a fireplace flanked by elaborate wood paneling is perfectly centered in the doorway, a wonderful architectural feature to highlight in any home. 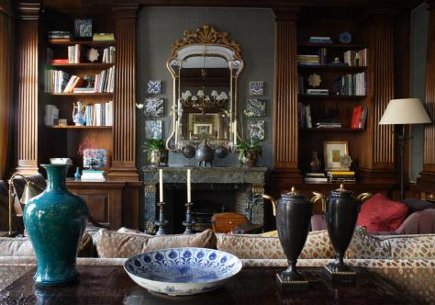 A twist on mantel accessories. The sumptuous, wood-paneled reception room features a dark marble fireplace with a pale gray upholstered wall panel above it. An important parcel-gilt mirror sits over the fireplace (note its shell motif echoed in the chandelier). Often, mantel garniture would be a group of Delft (blue and white) vases. Instead, three old Delft tiles hang like plates on each side of the looking glass as a fun play on the traditional arrangement or a clever comment on the old-fashioned (but wonderful) displays of ceramics. 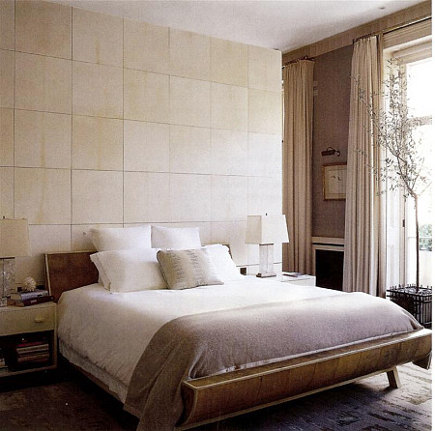 The  Hollywood glamor bedroom. The master bedroom marks a departure from the public rooms. Where those affect a European attitude, the pale boudoir has the mid-20th Century look often reinterpreted for homes built during that era in L.A. Fabric on the bedroom walls is a color called eau-de-nil, French for “water of the Nile,” an ethereal green-beige favored during the 1930s and 40 and a match to the shagreen (sharkskin) squares used to panel the wall panel behind the bed. A closet and dressing room sit behind the partition. 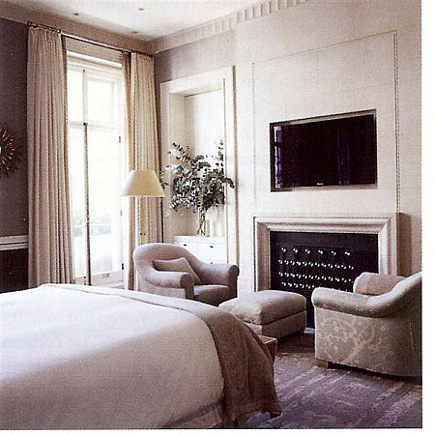 At the opposite end of the room, Smith mounted a flat-screen right over the fireplace with no attempt to hide or enclose it. View it as a modern approach or merely an alternative to a mirror.