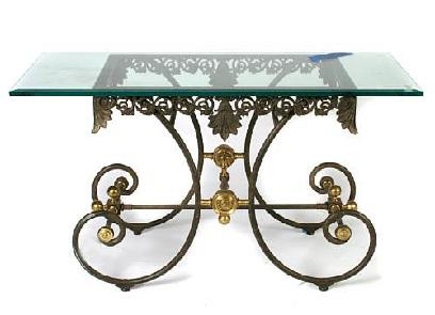 I find myself obsessed with palmettes, globes and scrolling legs on metal base tables.

Once I met an antique dealer who specialized in chairs. Just chairs. For me, it would be metal base tables, perhaps a hangover from my days as a restaurant critic. If left alone with furniture I’ll usually find a table I could buy, particularly an old one with a metal base and any one of three common motifs.

Among my favorite metal base tables is the French scrolling leg. These are often made of brass and the artistry lies in the detailing of the lacy bits which, actually, are classical architectural motifs. This one [top], a real beauty, also has wonderful brass globes on the stretcher bars and at the ends of the c-scrolls. The glass top perfectly exposes the graceful forms on the bottom. 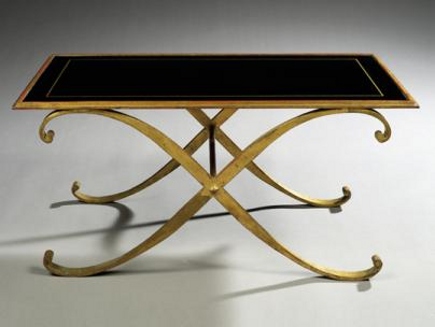 One of the great metal artists creating everything from stair banisters to firedogs (andirons) in during the early 20th century was Raymond Subes, who died in 1970.  His work is highly collectible and fetches breathtaking prices so I have settled on collecting him virtually. Among his metal base tables I especially covet is this small (36 x 20-inches) low one made of gilded iron with a graceful, slightly scrolling X base and a black opaline top. This one came up for auction in Paris. There’s a perfect spot for it right next to my sofa. 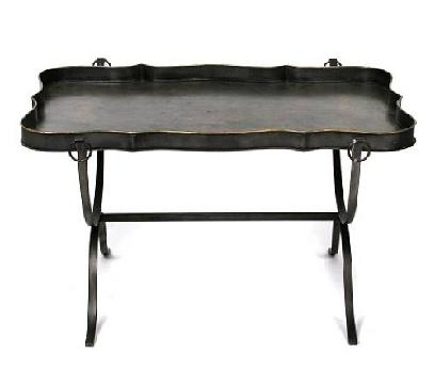 Tole — lacquered or enameled metal — is another of my passions. Created nearly three centuries ago tole trays, lampshades, boxes and sconces are what’s still around. Trays frequently are made into tables. This one happens to be Italian and while the decoration has largely worn away it’s interesting to note the ring details and the graceful scalloped contours of the rim. The wrought-iron base is simple enough to support, but not upstage, the top. I think this would look sensational in an all-white or all-beige room. 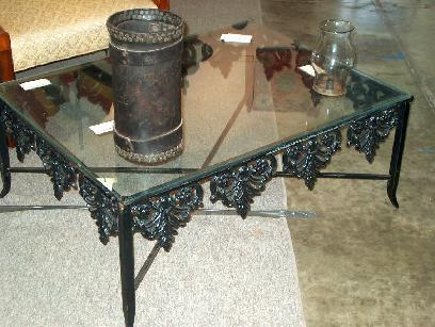 I flirted with this vintage black cocktail table at the Rhinebeck Antiques Fair a few years back, at least enough to keep the photo. It was very large but, in retrospect, I wish I had bought it. The base was repainted with unfortunately shiny black paint, which can easily be seen in the photo. It  looked better in person. It has a unique form and style but I am consistent in my obsessions. I like palmette motifs — which appear on the border details of the brass table and the black one, too. And just for good measure, here is more than anyone wants to know about palmettes. 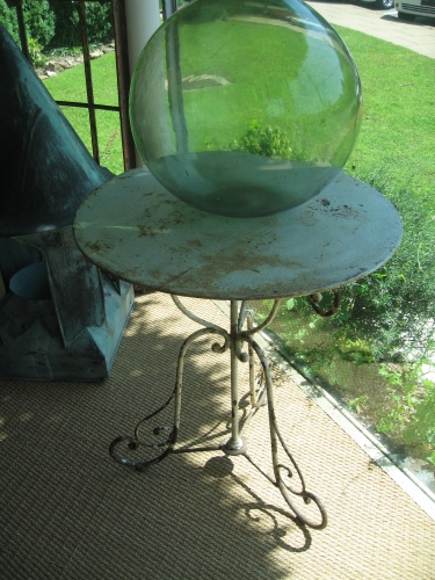 On a simpler note there is this charming, chippy French painted metal base garden table with a metal top. It appeared on the website of Hen House Antiques, Birmingham, Alabama, a favorite haunt of Allison’s. Browsers were obliged to call for dimensions and price (I didn’t). I  include it here because it’s so attractive  and would look great in my house. 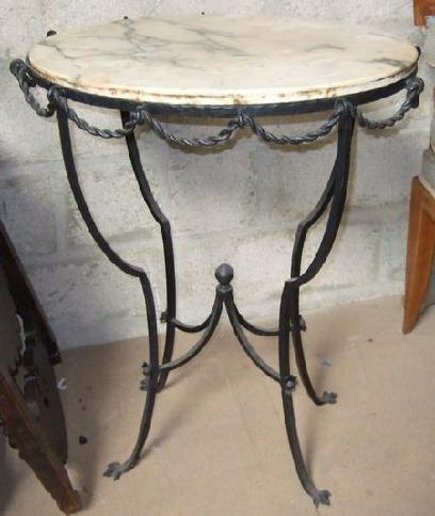 An auction house in Paris offered this marble-topped guéridon from the 1920s-’30s with a wrought iron base that includes twisted swags and a pointed or “China cap” stretcher (I also love the little 3-toe animal feet).  Despite the fancy name, a guéridon is merely a small, round accent table which usually  includes human or animal forms, columns, urns or mythological figures — this one has the little paws so it qualifies. Yep, paws and ropes.

Copy and paste link to quick-share this post:  http://bit.ly/ihPWuc