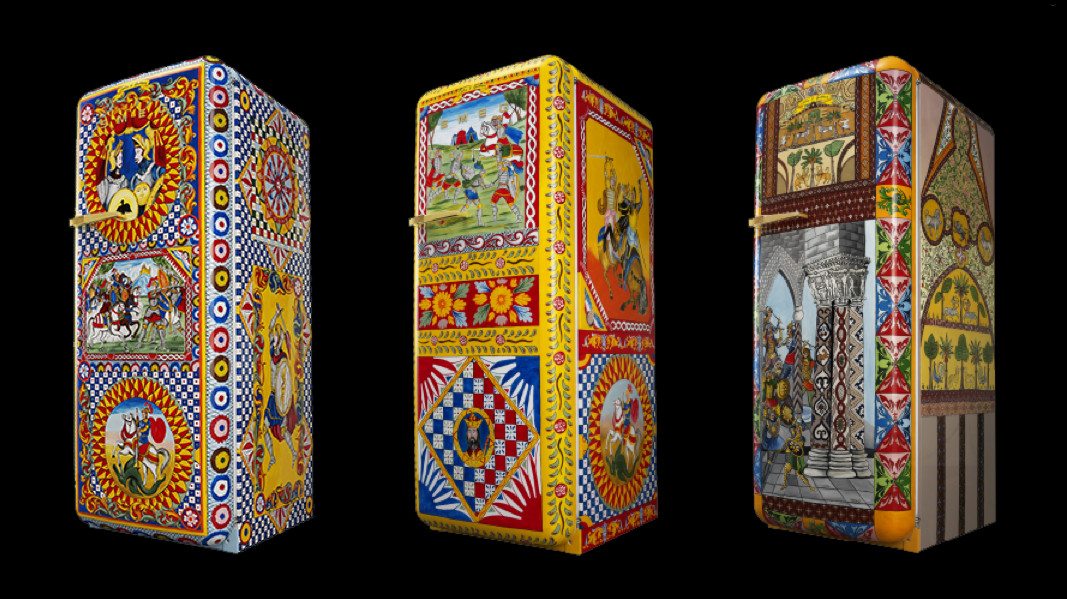 Dolce & Gabbana refrigerators are a riot of Sicilian-inspired color and pattern — even on top.

Dolce & Gabbana refrigerators are a limited edition of 100, created in collaboration with Smeg, the Italian appliance giant. Smeg’s iconic Fab28 refrigerator is a stand alone retro classic that comes in dozens of colors — like the red one I showed in my Fab Fridge Kitchen post.

Smeg is not a well known brand in the U.S. market nor is its motto is “technology with style.” However, in Europe the company are know for their collaboration with architects and designers to produce special products. This year, the creativity of couture geniuses Domenico Dolce and Steffano Gabbana was applied to a limited edition of folkloric hand-painted refrigerators  [top] that debuted in April at the annual Salone del Mobile in Milan. 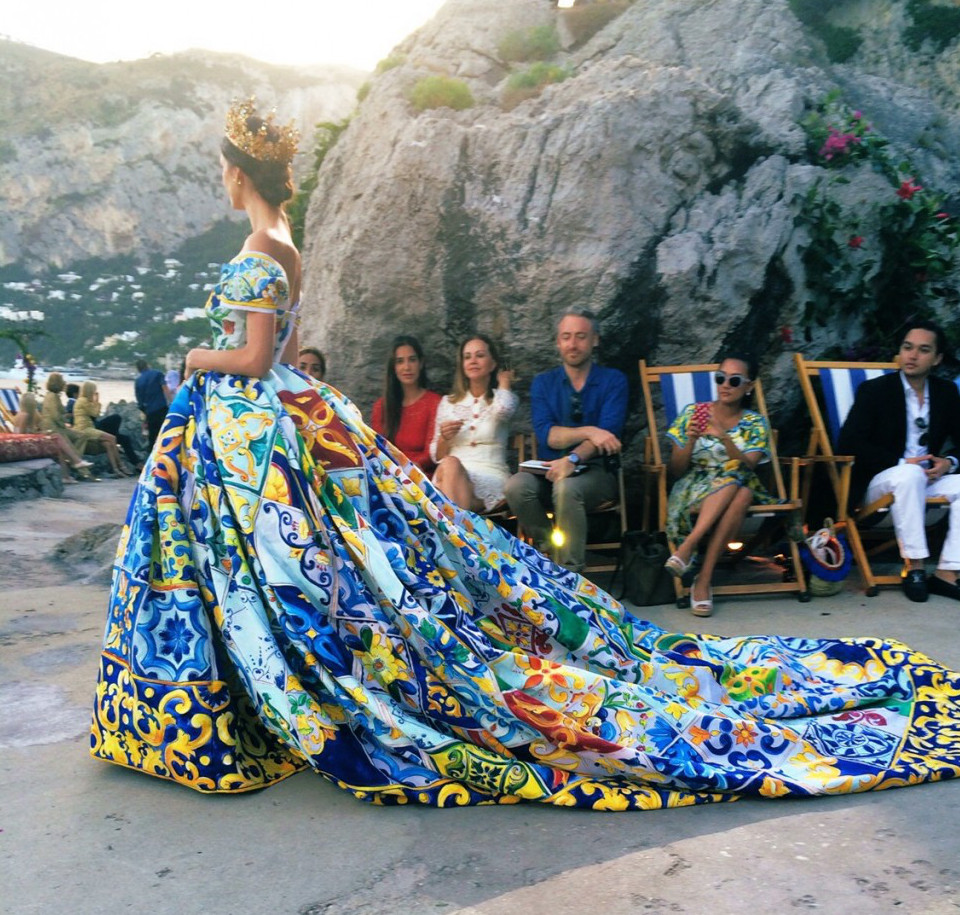 Dolce & Gabbana are known for their exuberant prints like the one for this ball gown from the 2014 couture collection show in Capri. I have one of their vintage fruit-pattern dresses which makes me happy every time I wear it. However, the Smeg fridge patterns are even more intense than the clothing. Some 100 hand-painted refrigerators were produced by six teams of Sicilian artists. The fronts, sides and even the top of the fridges are all over pattern taken from Sicilian folklore. Decorations include classical floral motifs, folk art decoration and mythological and biblical battle scenes. Crazy! 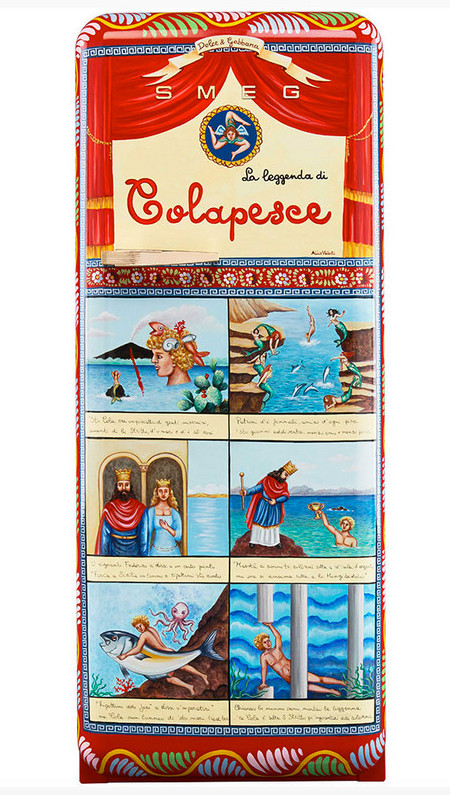 One of my favorites among the fridges (I’m not-so-much for St. George Slaying the Dragon themes) was painted by Sicilian artist Alice Valenti. It presents the legend of Colapesce — Nick the Fish — a fisherman’s son and highly skilled diver named Nicola (pesce is Italian for fish). As the tragic legend goes, Nicola was so talented he gained notice from the king. That, of course, was his undoing. To test the skill of “colapesce” the king threw a golden cup into the sea three times. Nicola retrieved it twice but did not resurface on the third attempt. The front of the Colapesce fridge shows six vignettes of Nicola diving, it depicts the King and Queen of Sicily, and also shows Nicola retrieving the golden cup. In the last two frames it shows Nicola “swimming with the fishes” and his end at the bottom of the sea holding up one of the three pillars on which Sicily was believed to rest. The colapesce tragedy centers on the Straight of Messina, a 20 mile long by 2 mile wide waterway between Calabria and Sicily that connects the Mediterraneaon with the Ioanian and Tyrrhenian seas. 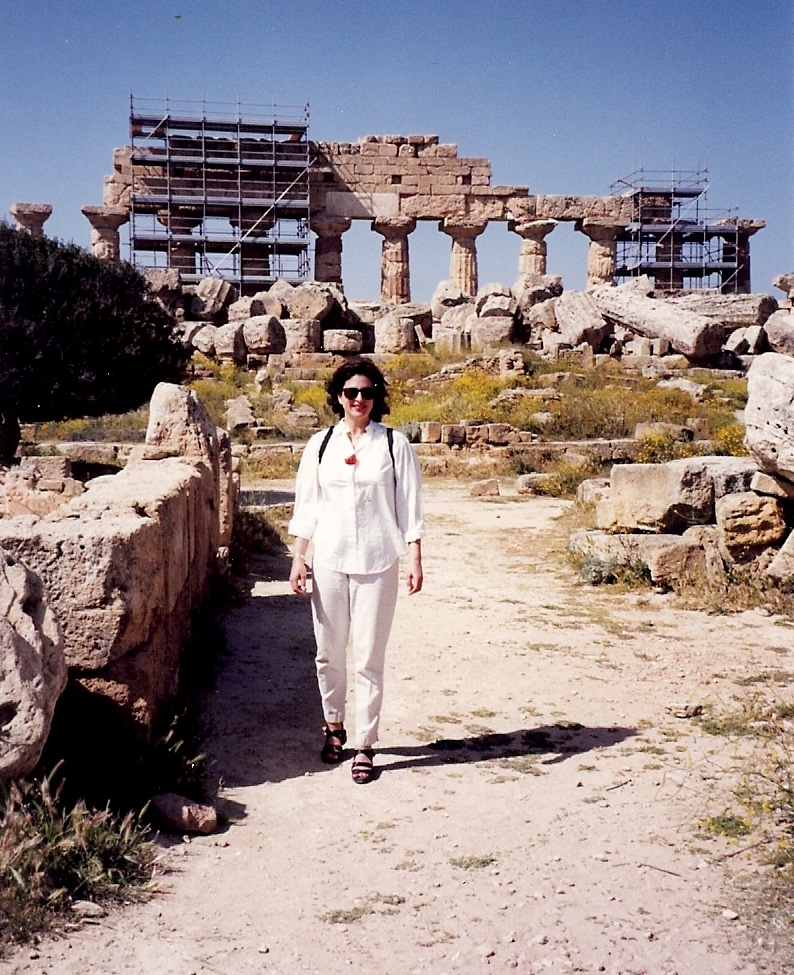 Siciliy, as I learned from a trip there in 2000, is famous for its Greek temple ruins. 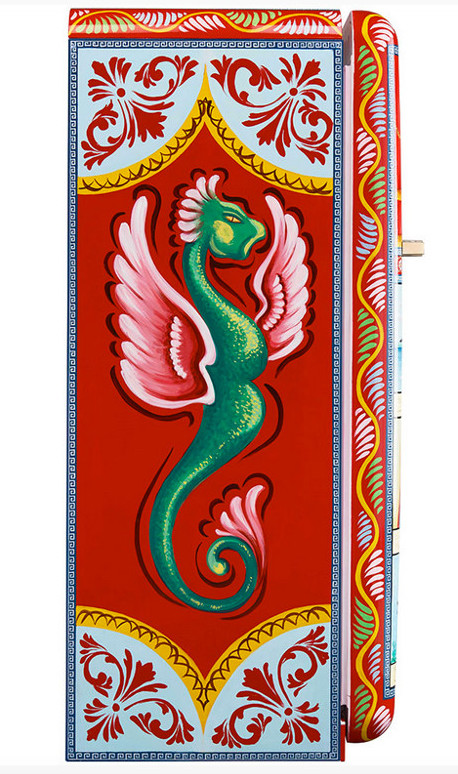 The Strait of Messina is equally famous in Greek mythology for its cross currents and a pair of whirlpools the Greeks named Scylla and Charybdi and which were depicted as sea monsters in Greek mythology. The mythological creature Scylla is on one side of the D&G fridge. 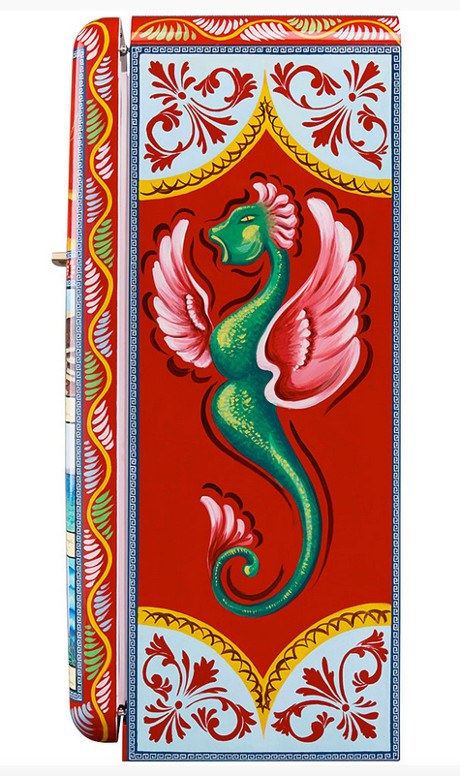 While the mythological twin creature Charybdi is on the other. Note the Greek fretwork on the frame and the acanthus leaf motif on the corners. 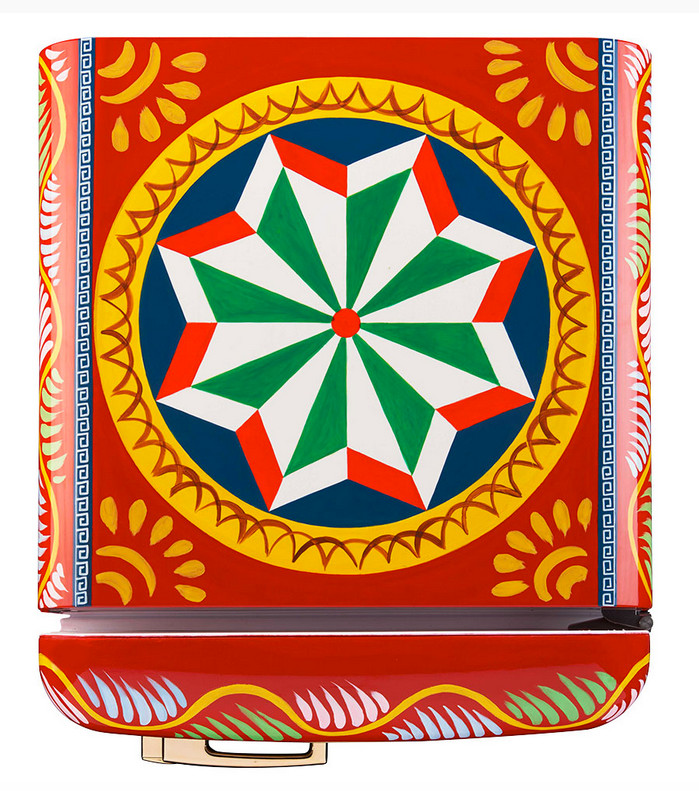 The top of the fridge is one of my favorite views. Using motifs from 19th century Sicilian cart decoration it almost looks like a board game!

While Sicilian folk art may not be to everyone’s taste, it’s hard to disagree that these one-of-a-kind fridges are stunning and could easily inspire a wonderful and dramatic kitchen design. Wow.