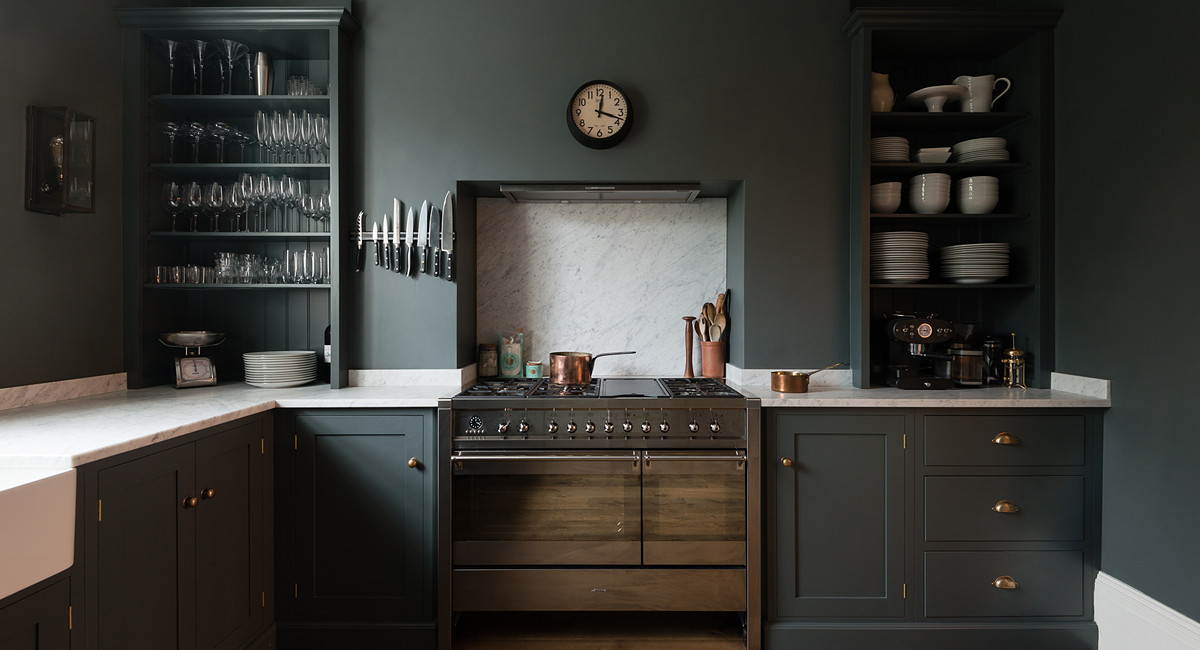 Elegant and modern, this deVol kitchen was done in a dramatic dark color called Flint. It also combines traditional Shaker cabinets with an extremely simple color scheme to maximum effect. Located in a private home in central London, the attention to detail shows what makes the kitchen is so unique. Walls, cabinets and shelving are the same color which unifies the space. Rather than creating a horizontal sightline by installing upper and lower cabinets, the height of the ceiling is emphasized by the absence of upper cabinets. Instead, tall framed “bookcase” style shelves provide open storage. Those sit directly on the counter but they don’t intrude on counter space near the range an they cleverly take up traditionally dead corner space.

In typically English style, the range is set into a niche. This one is squared off and unembellished in minimalist style. The niche has no defined chimney but conceals the venting — note that baffles are flush with the top. The range is a Smeg and behind it the marble slab matches the white counters and creates a surefooted focal point. Base cabinets flanking the range are kept simple with a bank of drawers just a few steps away. 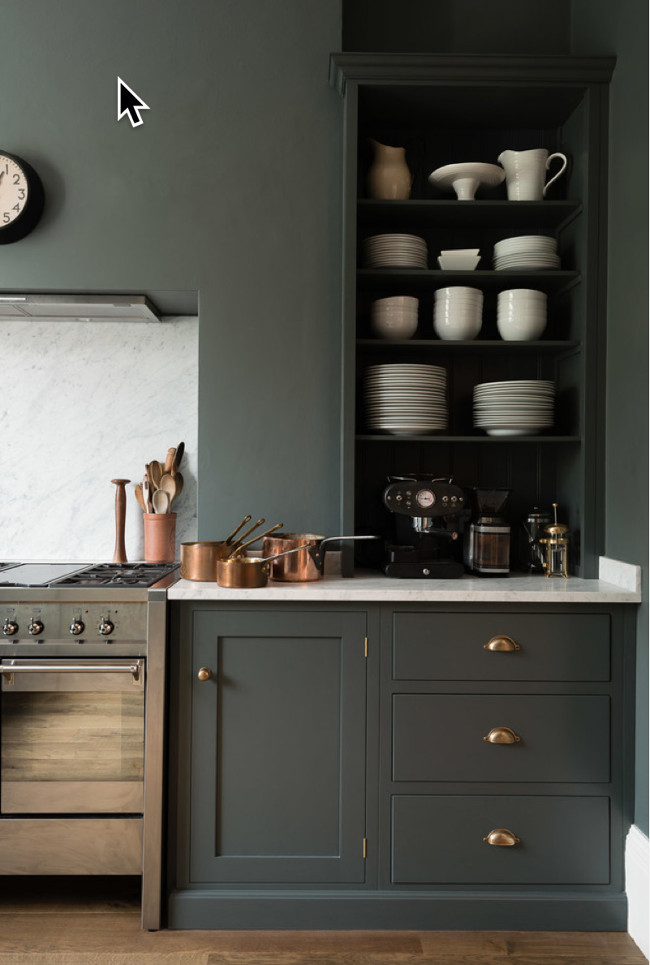 A closer look at the shelves shows how clever kitchen design can compensate for architectural issues. Shelving to the right of the range is fairly deep and partially recessed into an alcove. That allows it to be nearly flush with the back of the counter and not occupy essential counter space. Brass-tone cabinet hardware warms up the somewhat austere color scheme but doesn’t compete with stainless on the range. 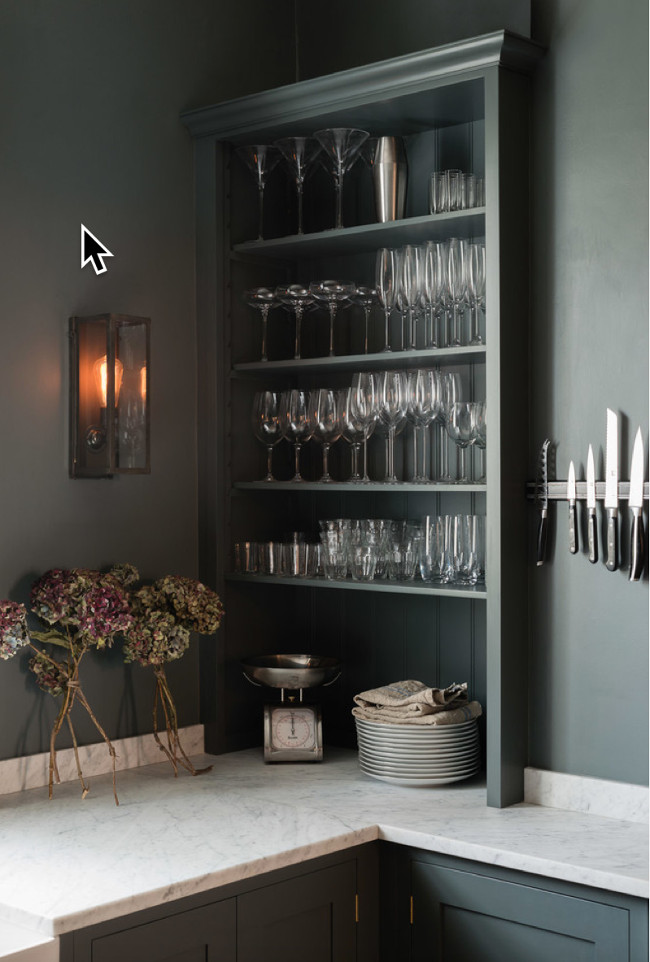 The set of shelves to the left of the range appears slightly less deep than the other side. It also occupies the corner, which equalize the difference between the depth of counters and offers a natural place for a seam in the stone. 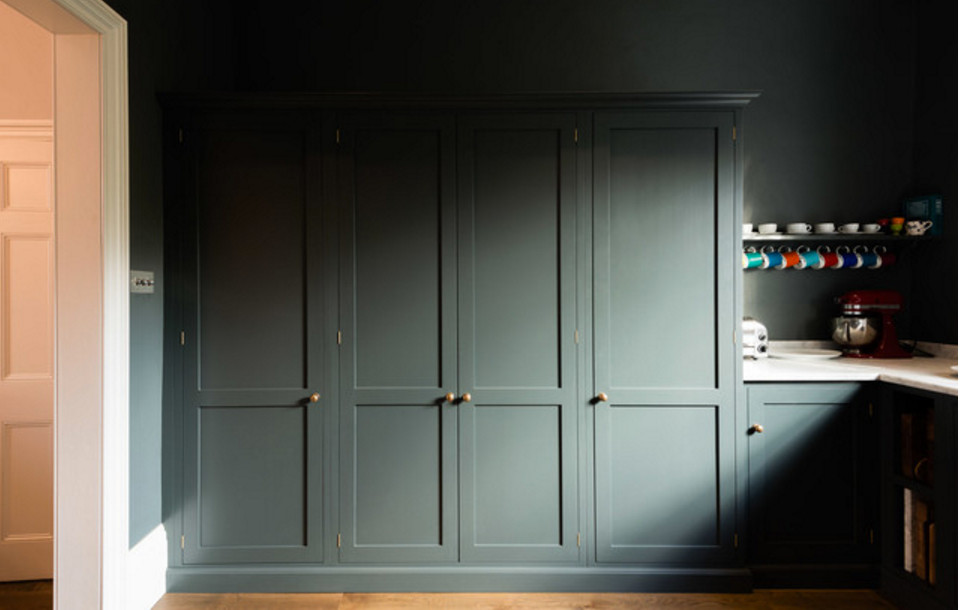 Another under appreciated kitchen feature, at least in the U.S. is the traditional English larder cabinet. A simple shelf with cup hooks below helps utilize the open space between the cabinet and the sink wall. 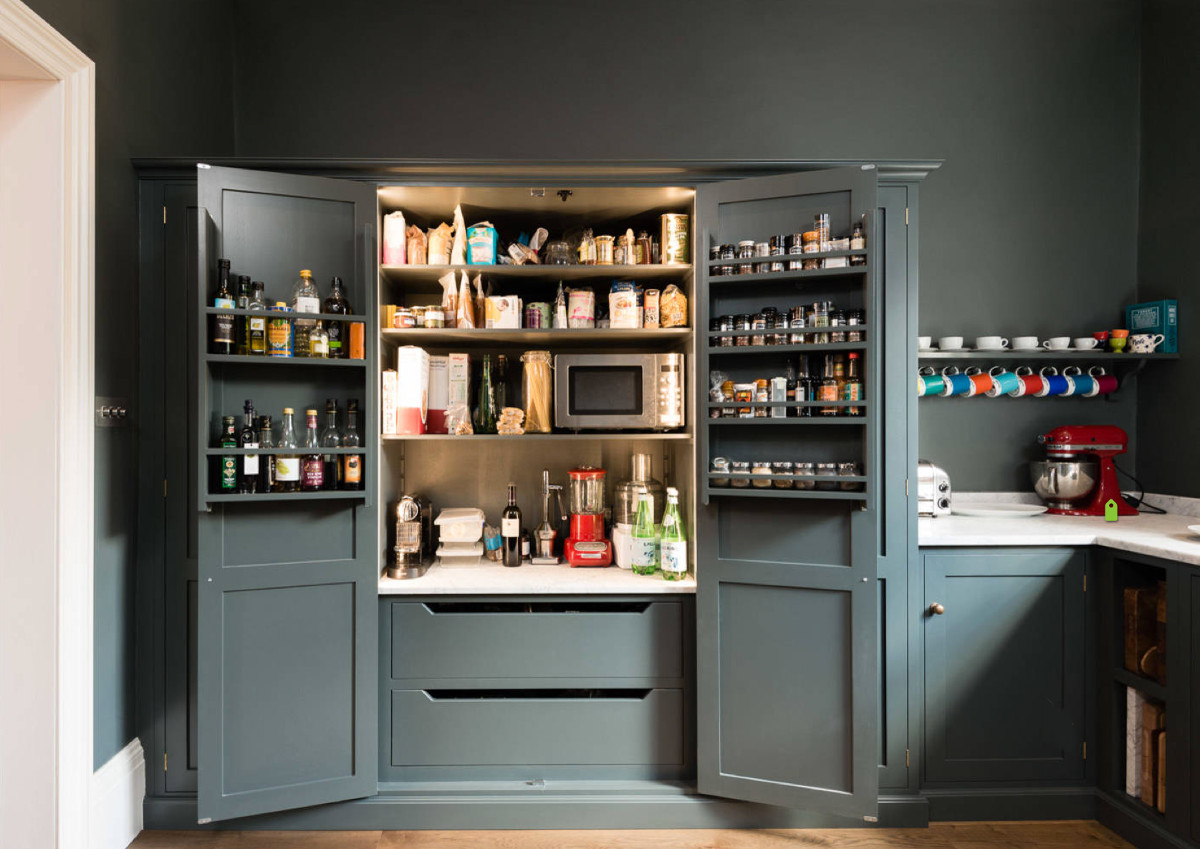 With doors that open out to expose shelves, drawers, and a concealed work top, the larder occupies major real estate. Doors on the left and right of the larder likely conceal a paneled refrigerator and freezer. 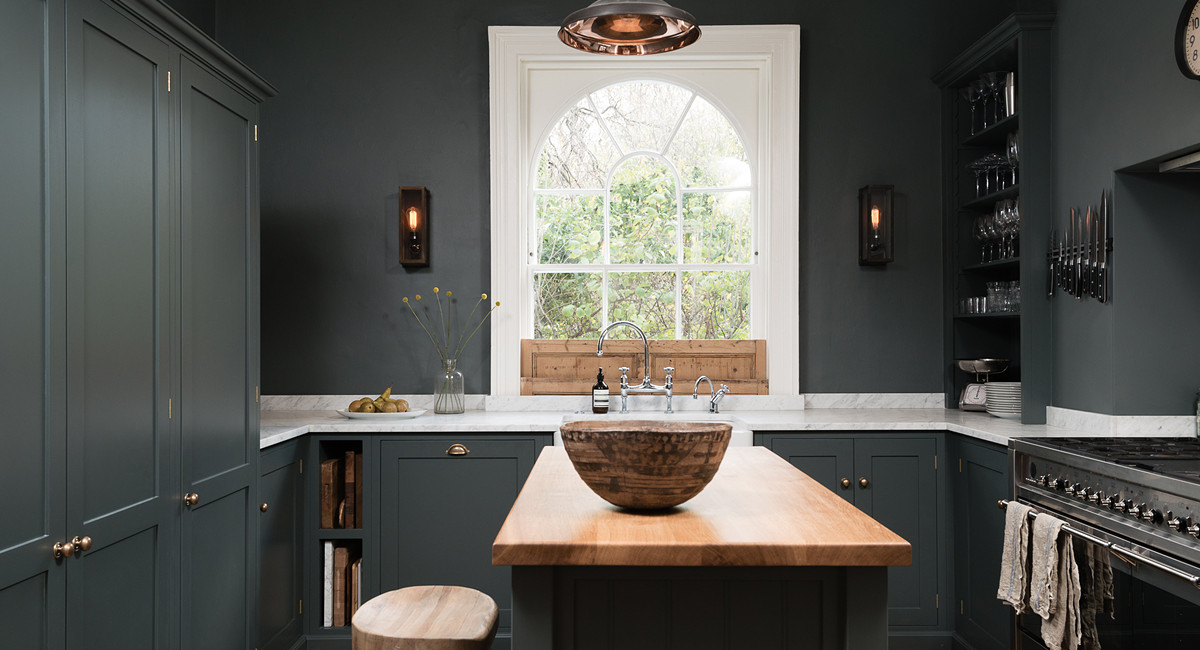 This is a second look at the sink wall which I included in my Dark Gray Kitchens post. This shows the narrow work island topped with natural wood to coordinate with the unusual antique pine “highwayman’s window” shutters that slide up over the arched window. Again, keeping things simple, the base of the island is the same color as other cabinets. A paneled dishwasher sits to the left of the sink. And there’s open shelving — instead of a susan — resolving the troublesome corner base cabinet space. 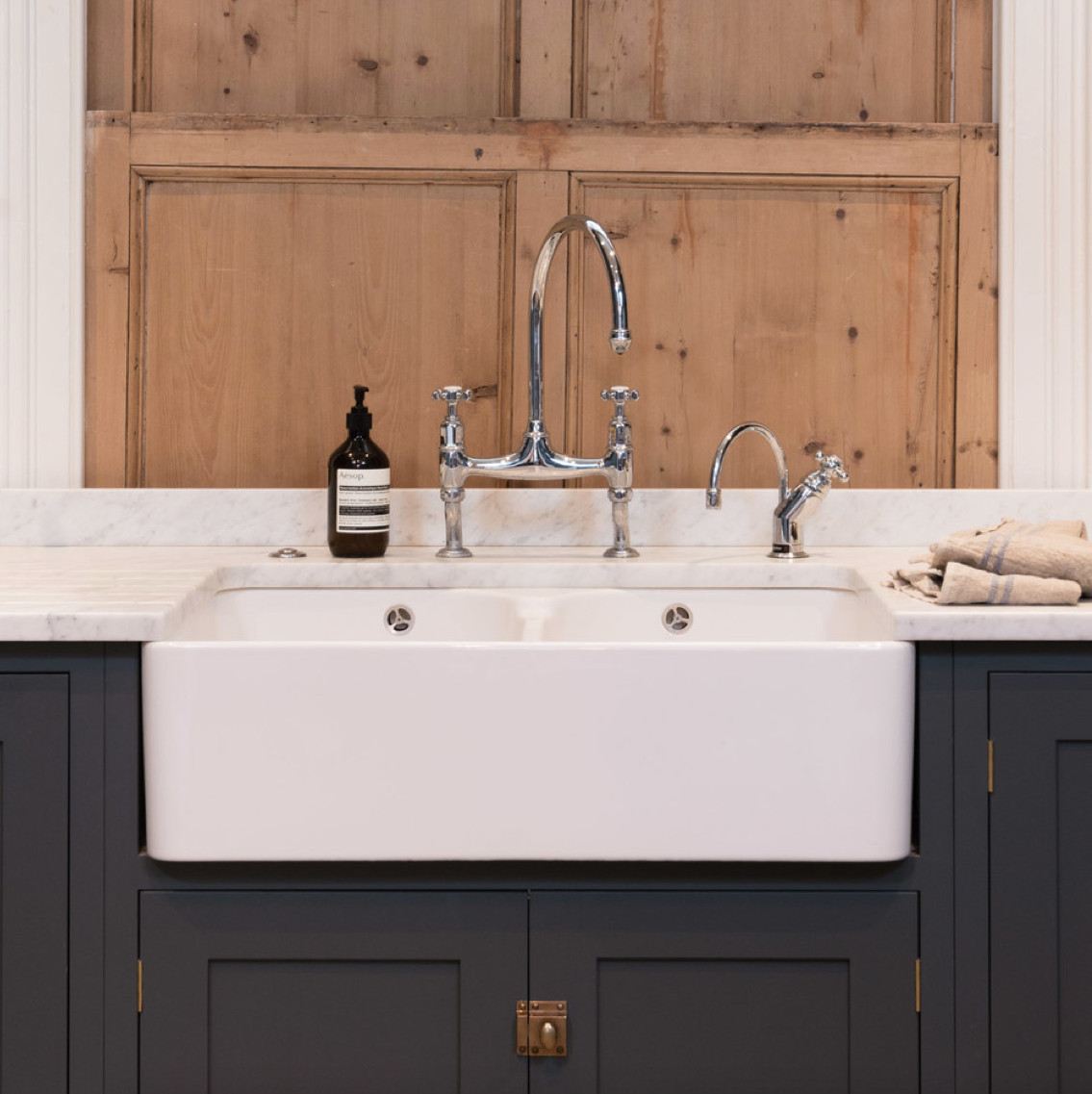 When raised, the antique pine shutter helps accent the double farm sink. That’s undermounted in the marble counter with runnels on one side. The cabinet below the sink has an unusual vintage-style latch. 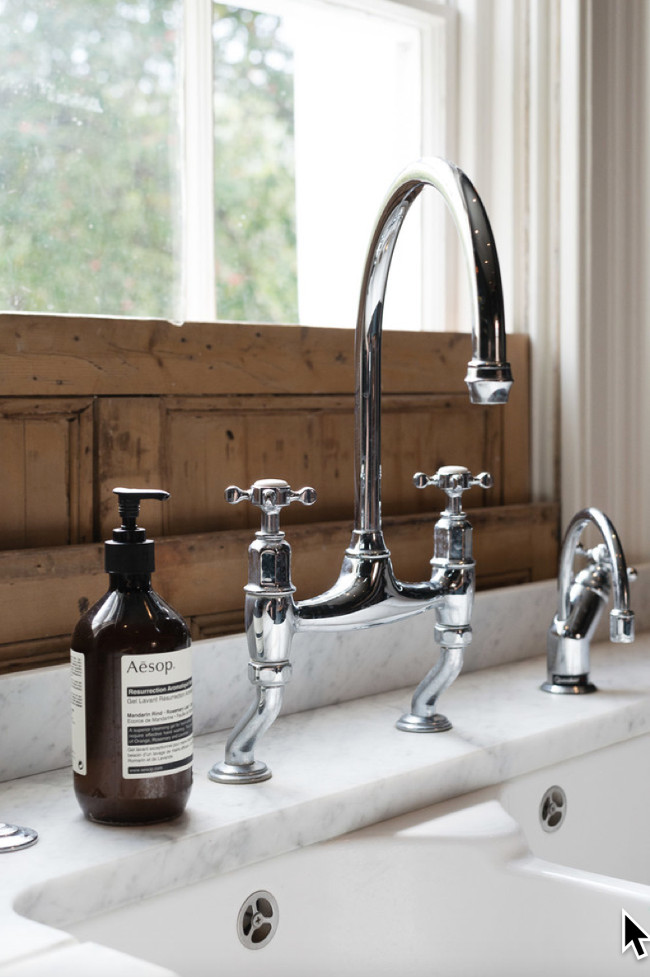 A classic bridge faucet with spoke handles an offset legs reigns on the sink deck. 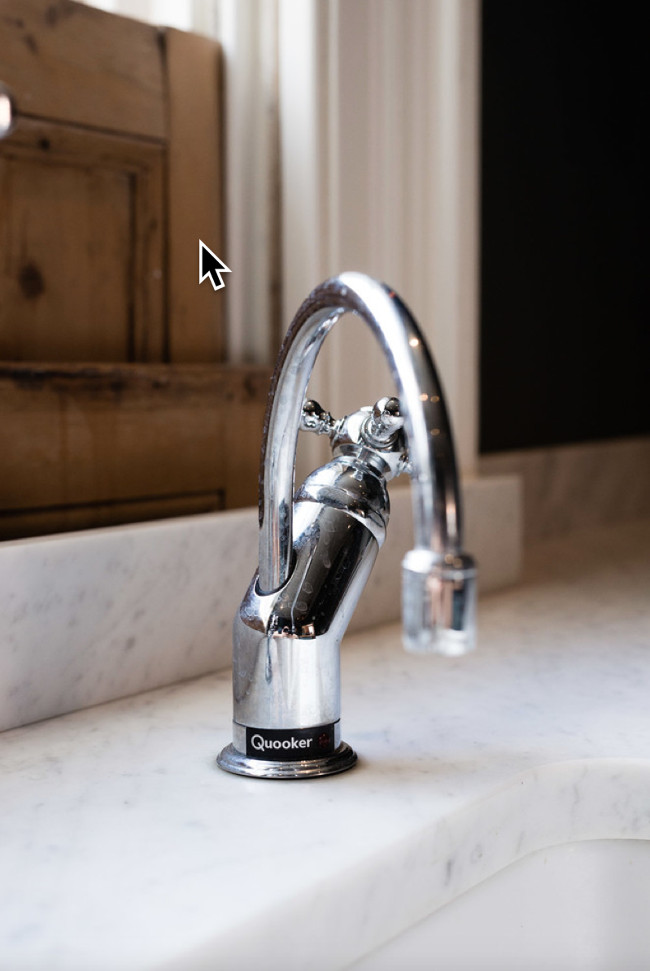 Several years ago I stumbled on the English instant boiling water faucet by Quooker with a video in my post that shows how it works. Here’s the first one I’ve seen installed in an actual kitchen. Since then I’ve been waiting — in vain — for the Quooker to come to the U.S.  I would love a Quooker faucet which would allow me to get rid of the electric kettle on my counter! 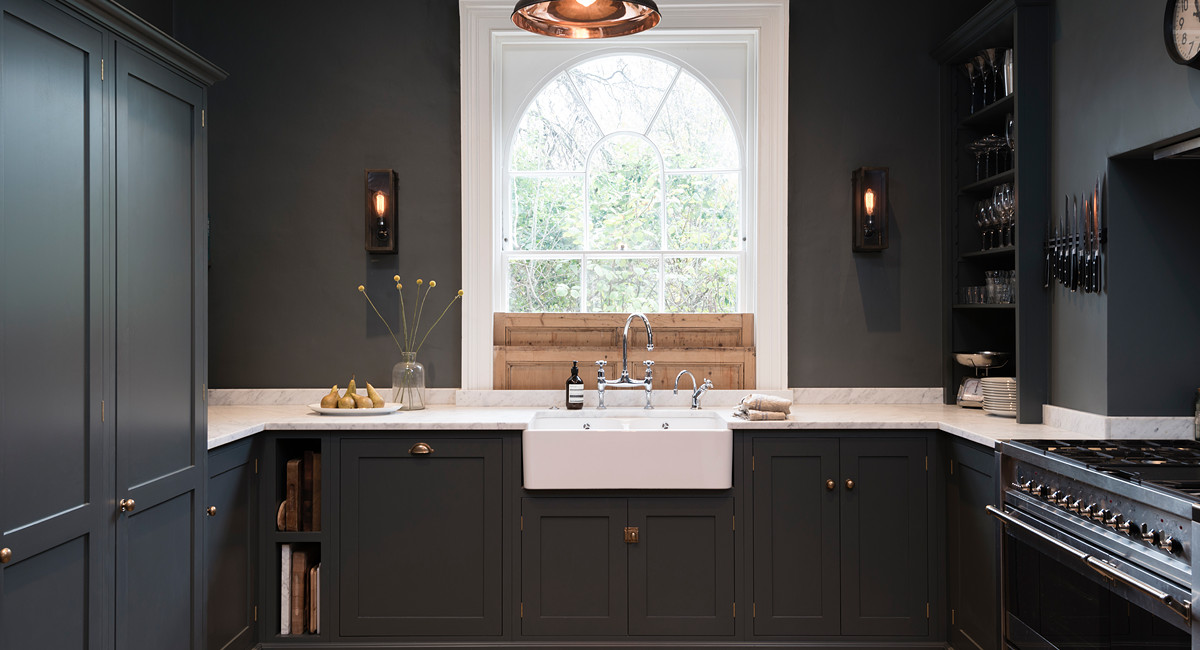 Basically, this is a gray and white kitchen with two minor natural wood surfaces. Yet with the way the gorgeous window was painted to become a visual extension of the counter top shows great design savvy. And even though I don’t usually feel an affinity for dark rooms, something in this kitchen calls to me.