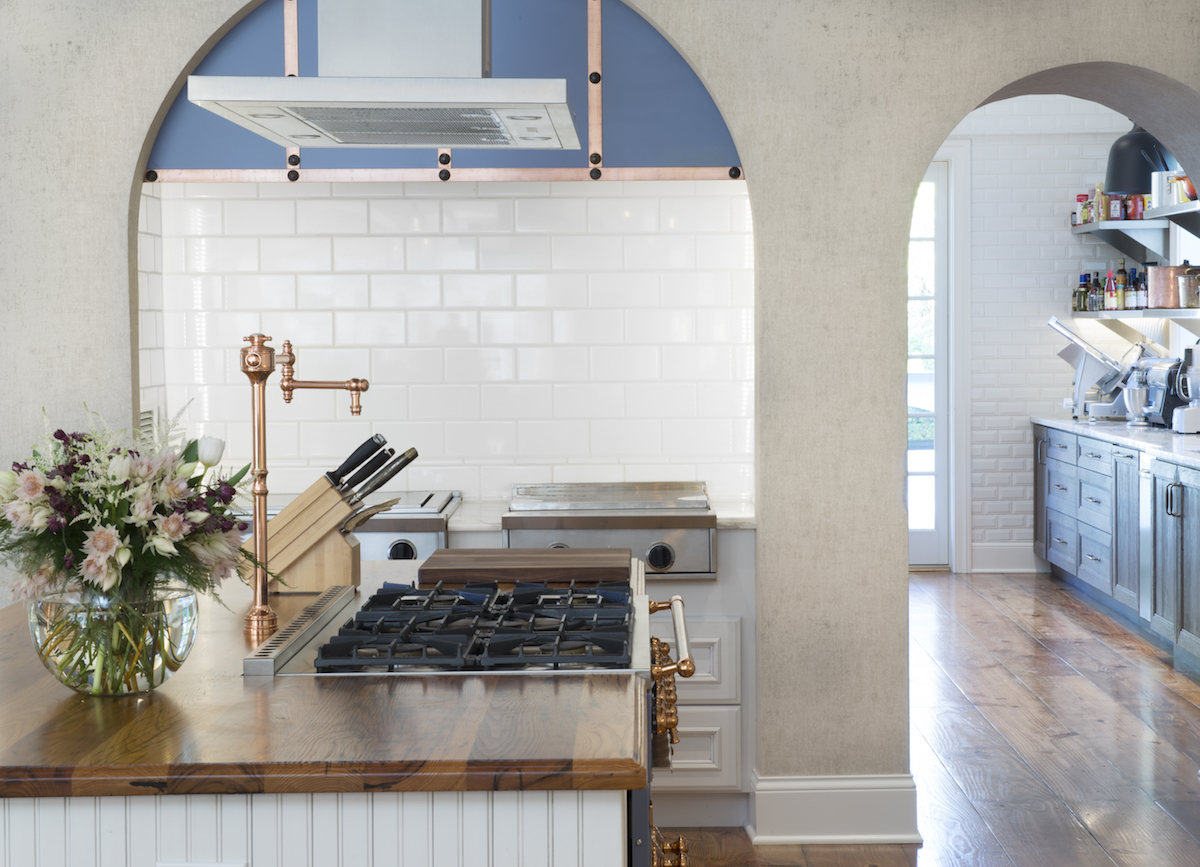 In the home of an extreme foodie, reno bliss is two kitchens — fully loaded.

Create two kitchens, with completely different looks, side by side in the same house by opening up a wall and incorporating the attached garage. Fully load them with high end appliances, including a Provence blue CornuFé 5-burner range, La Cornue’s built-in rotisserie, plus a set of Blue Star French door wall ovens. Re-use the existing Sub Zero refrigerator and freezer drawers as well as a beloved copper sink. 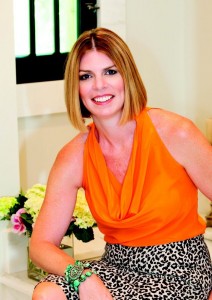 That — and more— was the task given to St. Louis kitchen designer Jenny Rausch [right], president of Karr Bick Kitchens and Baths. Her client is an extreme foodie client who had specific ideas for a doubled up dream kitchen — one that expresses a French farmhouse ideal, and the second (partly visible through the archway, top) a restaurant-quality, functional working space accessible to his outdoor pizza oven, smokers, and fire pits. Aesthetically, the looks of the two kitchens are very different. Each is beautiful in its own right with the kind of attention to detail that anyone contemplating a kitchen renovation would hope to find from a designer. While Ms. Rausch describes the project as a “labor of love” I would also add that it’s a tour de force — a mixed marriage that’s not easy to successfully consummate. 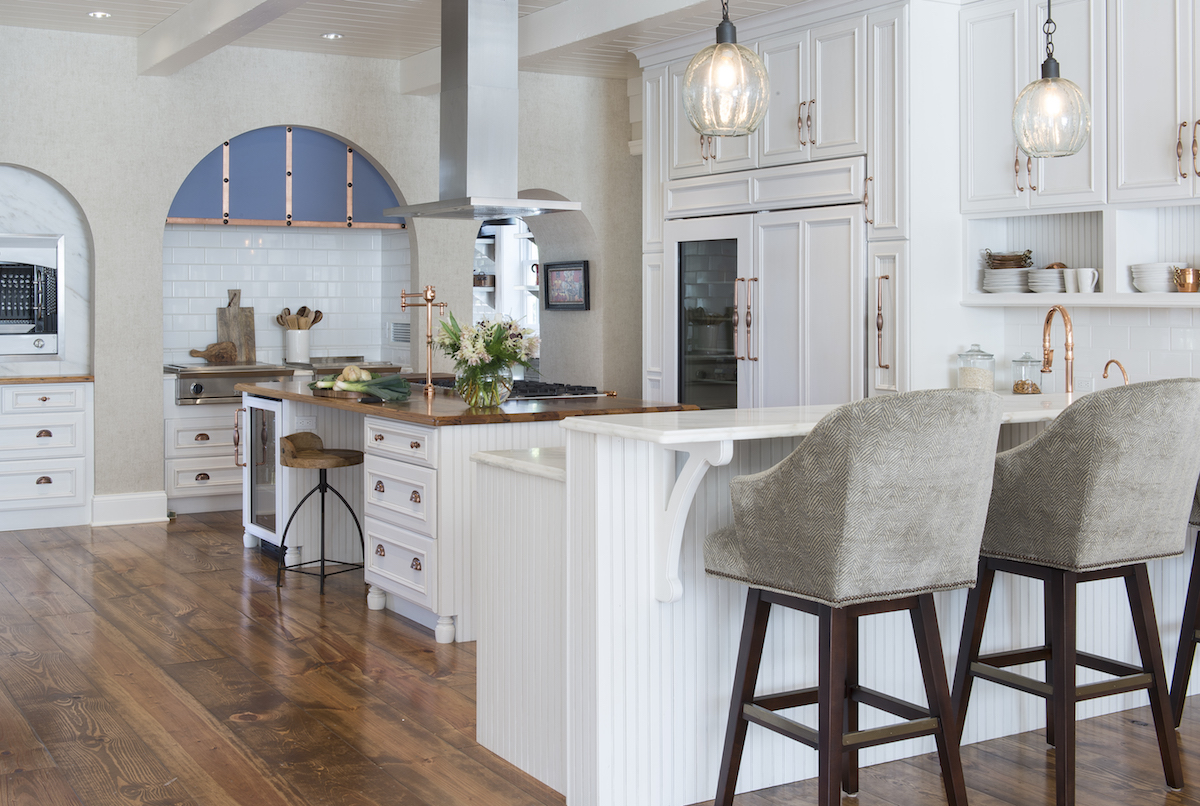 Each kitchen has its own distinct personality and nickname. The “pretty kitchen” occupies the original 20 by 16-foot space. An all-white kitchen, with white DuraSupreme cabinets, it has a single accent color — La Cornue’s Provence blue via the CornuFé110 range set into the 8-1/2 by 4-foot island. A La Cornue rotisserie is flawlessly set into white marble next to a Provence La Cornue blue hood over a niche housing a Wolf chargrill and 24-inch griddle. 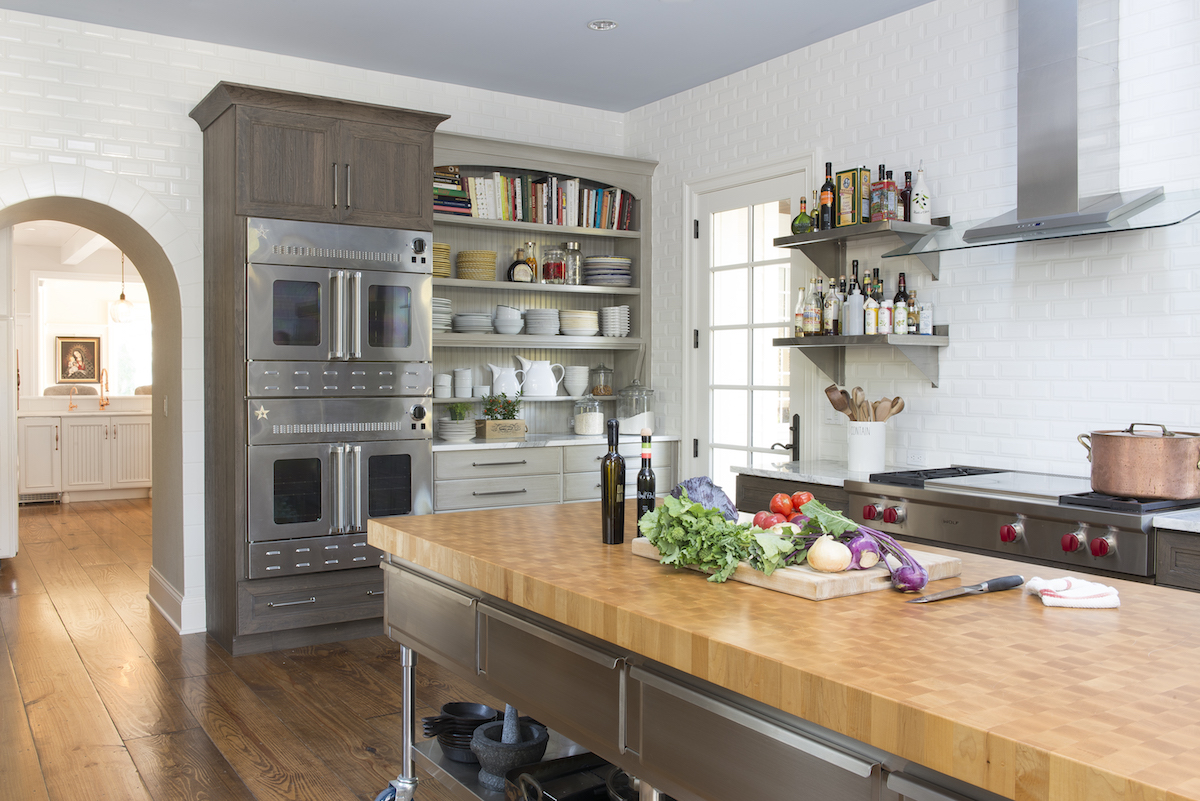 The adjacent 20 by 16-foot “dirty kitchen,” boasts 8-1/2 foot long custom island, with end-grain butcher block top, designed by Rausch with casters for maximum flexibility. Floor to ceiling white subway tile, open shelving, plus a set of Blue Star double French door wall ovens which Rausch notes, “weigh as much as a Sub Zero,” are other features. Additionally, a hutch like cabinet from the original house kitchen was repainted and used here next to the ovens. 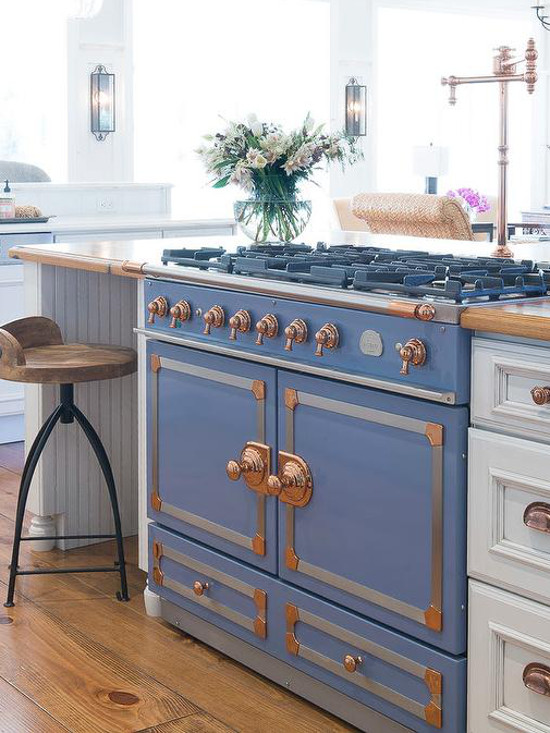 From its conception, the “pretty” kitchen began with the owner specifying the Provence blue CornuFé 110 which may look familiar from my post on Blue La Cornue Kitchens. Jenny explains that the the range was placed in the island so her client could “watch TV along with his wife while he cooked.” And, when not standing and attending to something on the stove, he is comfortably perched on the Arteriors Henson stool at the open niche built alongside.  The deck-mounted copper Waterstone pot filler faucet matches copper trim on the range and is handy for filling pots in situ. 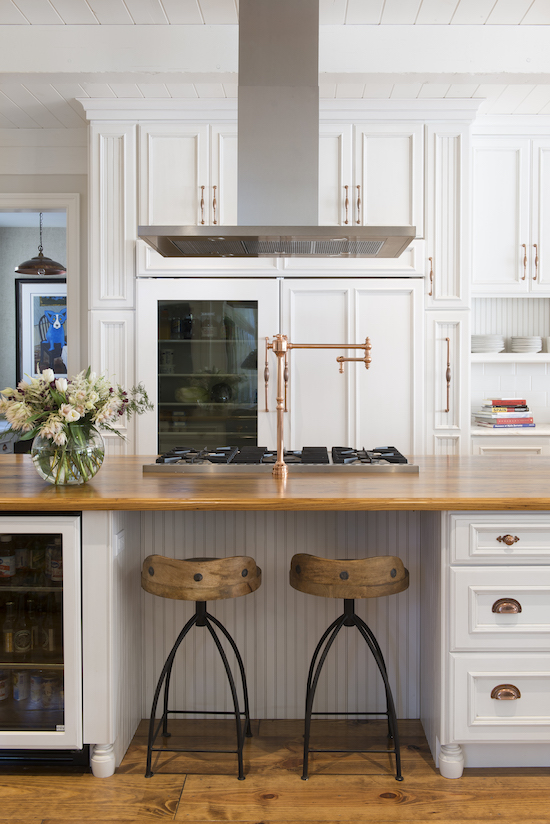 On the opposite side of the 8-1/2 x 4-foot island we can see how functional things are despite such a significant emphasis on appliances. The island has additional seating for friends and family of the cook when he works at the range, and a beverage fridge within reach. The cabinet wall, behind the range conveniently contains an all-fridge/all-freezer Sub Zero pair. 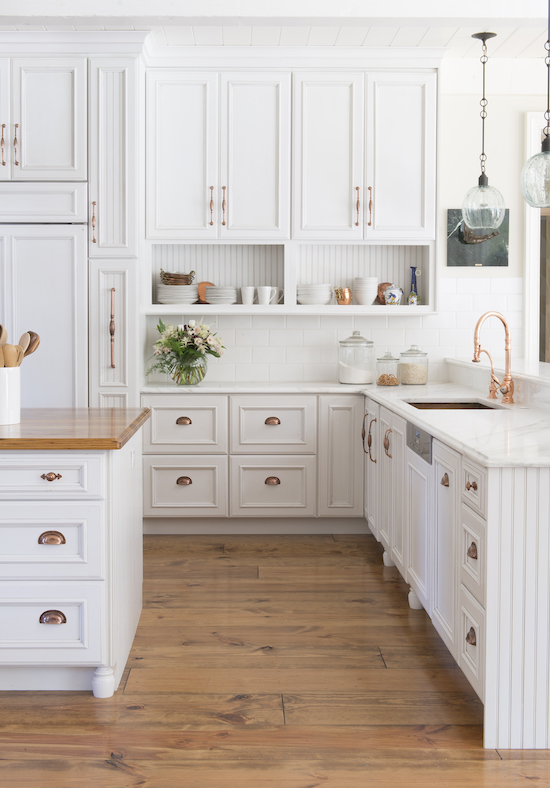 A pair of pendants illuminate the sink peninsula where an undermounted copper sink from the old kitchen was re-used, along with the existing Miele dishwasher. Dish storage display niches sit below upper cabinets. The all-white kitchen look is consistent with the white subway tile backsplash and Danby marble counters on DuraSupreme Cabinetry‘s white St. Augustine cabinets with platinum glaze. Copper accents to warm the kitchen and coordinate with the wood floor and reclaimed chestnut counter on the island. Cabinet hardware is from the Top Knobs Tuscany & Britannia collections, in Old English copper. 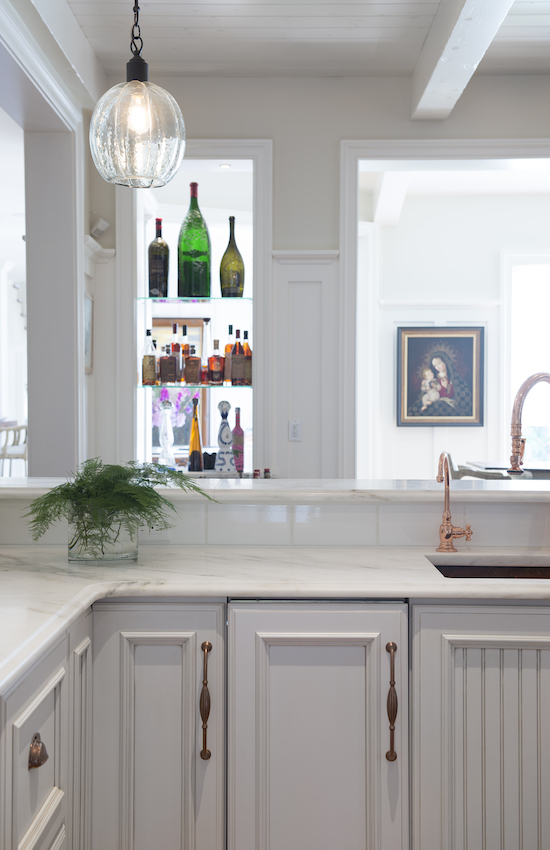 The kitchen sink faces into the dining room and porch-like addition with a window wall that overlooks the pool. Danby marble counters, with an ogee edge, are used here along with subway tile, even on the raised counter that provides additional seating on the other side. To the left of the sink is a Scotsman ice maker. 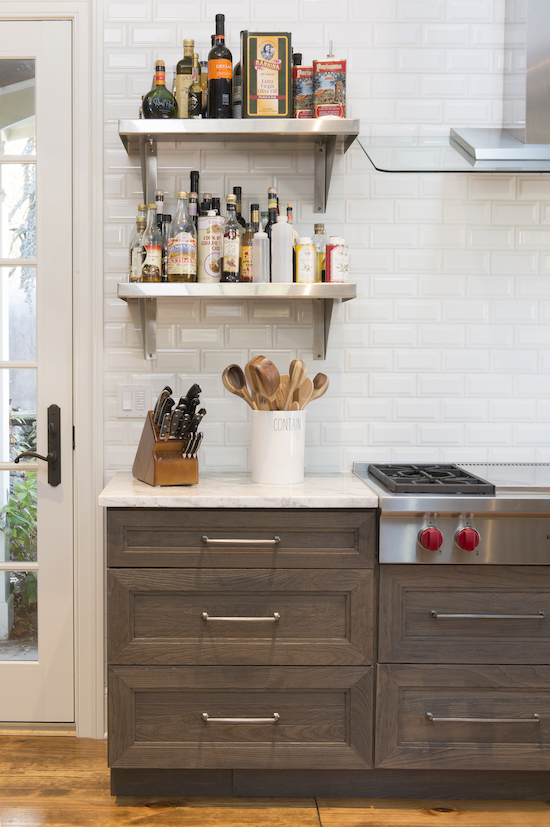 The scope of the affectionately named “dirty kitchen,” in the former garage space, seems to have captivated the designer because, as she explains, “it’s designed for a massive cook with dark cabinets, stainless steel [open shelving] and commercial style appliances. It’s his workhorse kitchen.” Here, DuraSupreme’s Dalton cherry Weathered B cabinets are matched to Princess white quartz counters. White subway tile is used in both kitchens but here beveled subways run floor to ceiling which adds texture to the walls. 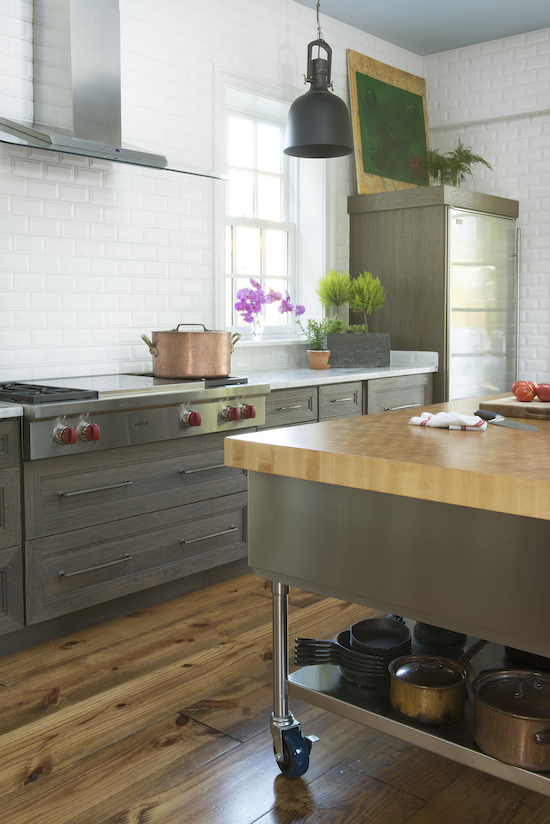 Accessibility in the “dirty” kitchen is emphasized, especially with the custom island on casters that Rausch had fabricated for this space. Some 8-1/2 feet long and 42-inches wide, the island has stainless storage drawers on each side, ample space to stow utensils. A full stainless bottom pot shelf houses larger casseroles that see simmer time on the 48-inch Wolf range top. I asked Jenny whether the owners entertain a lot and, as expected, they do. “He has a garden with vegetables and makes everything from scratch,” she says. “Originally, he wanted a walk-in refrigerator..and commercial dishwashers. Those require power and clearance, plus they give off a lot of steam and don’t look built in.” Instead, an existing 36-inch SubZero (far right) plus refrigerator and freezer drawers (on the sink wall, out of view) were the compromise for the avid foodie who, for a Christmas party, brought chefs into both kitchens to assist guests in decorating holiday cookies and donuts. 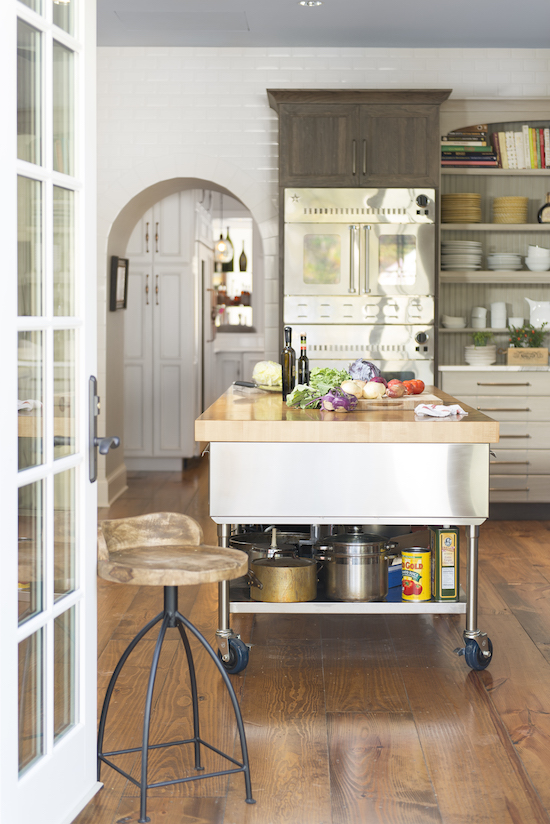 French doors replaced the old garage door in the “dirty” kitchen. This view through the archway to the “pretty” kitchen beyond shows how an unusual idea can be added elegantly to a house. Finished just before Thanksgiving, “we made the right choices,” Jenny Rausch says. “He’s extremely happy with the space.” Who wouldn’t be?