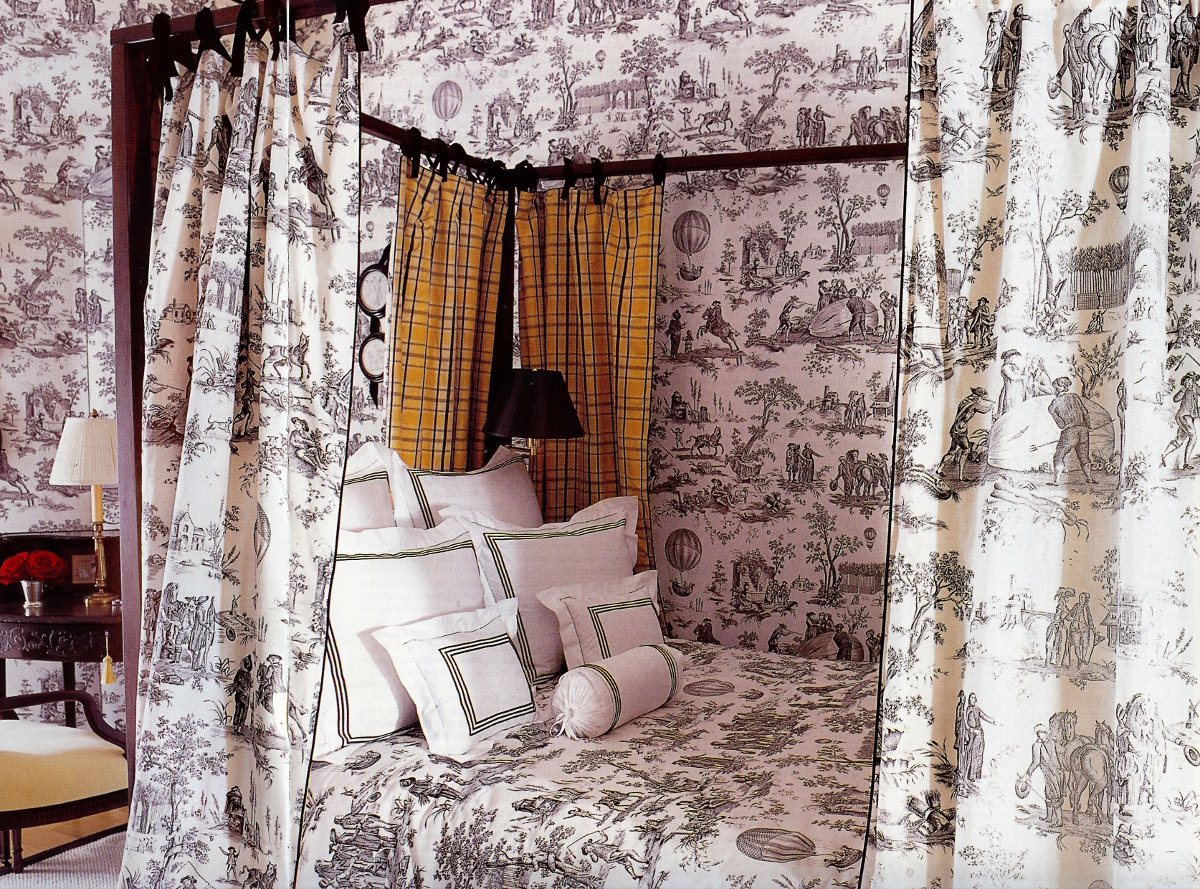 The strengths of toile are its color, the charm of the scenes, and the intensity of the repeated motifs to create a mood in a bedroom. Yet the strengths are also its weakness. Toile isn’t an easy mix for modern interiors. The designs are so muscular they tend to work best when toile dominates. Often, though, toile is mixed with accent fabrics — checks like Scalamandre’s Decatur plaid for the bed curtain lining in a design by Alessandra Branca [top]. Yet, inevitably toile is the star.

For this black and white bedroom with yellow accents, Branca chose Quadrille’s Ballon de Gonesse as the all-over pattern for walls, draperies and the bedcover. While country scenes with French peasants and hot air balloons may not appeal to modernists, this particular fabric pattern happens to have a fascinating back story which I stumbled upon. According to documentation by  the Cooper Hewitt museum, which owns an original 18th century textile of this design, here’s how to read this toile:

On August 27, 1783, the skies above the French commune of Gonesse were briefly darkened by a floating figure. The peasants, filled with fear by the unusual sight, shot down the hovering object and attacked it with pitchforks because they believed it was a monster. The “monster” was actually a hot air balloon. This scene of armed farmers surrounding a deflated balloon is one of the vignettes depicted on Le Ballon de Gonesse, a commemorative textile that captures the popularity of balloons in late eighteenth-century France.

The experimentation with and successful flights of hot air balloons in France from 1783 to 1787 resulted in “Balloon Mania.” During this period balloons became favored motifs in the visual and decorative arts…Textile producers realized that depicting contemporary events on fabrics would result in greater sales because the fabrics would appeal to a wider audience and, in addition, serve a patriotic purpose by celebrating French achievements. Le Ballon de Gonesse, produced by the Oberkampf factory in Jouy, depicts three balloon scenes from events that took place in 1783. These events were popular in the press and were a source of national pride, perfect subjects for a printed textile.  The first scene shows the August 27th flight of an unmanned balloon that was launched by Jacques A. C. Charles and Nicolas-Louis Robert and unexpectedly and dramatically ended by the people of Gonesse.” 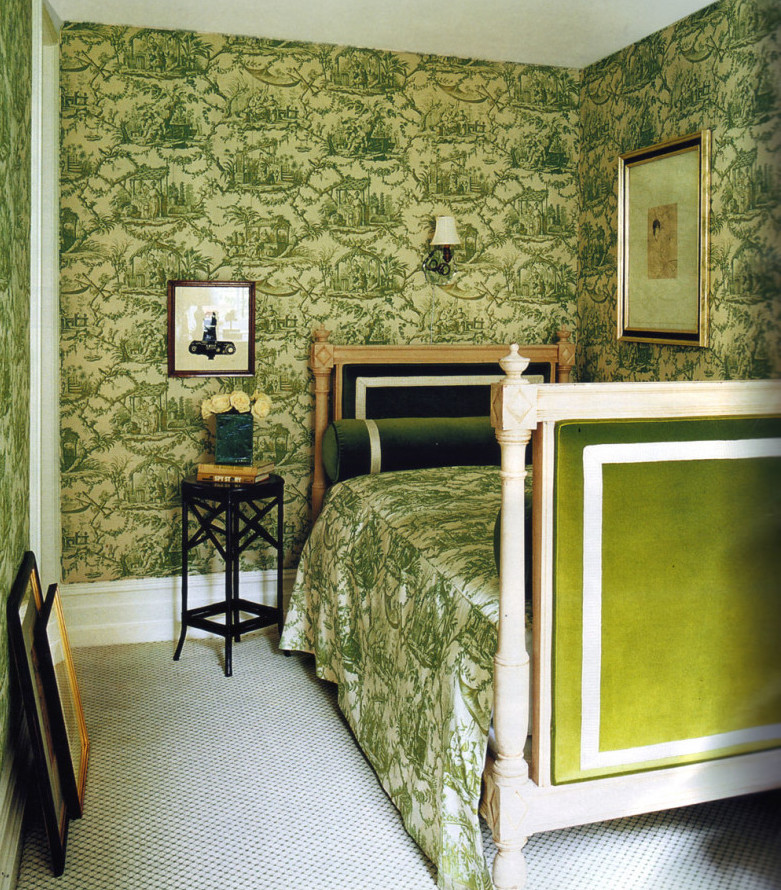 In the New York apartment of women’s wear designer Kate Spade, a small guest bedroom was decorated with a vivid green toile wallpaper and matching fabric — Osborne & Little’s Rococo pattern depicting vignettes of Chinese pagodas and ladies in a landscape linked by dense garlands. The quieter French daybed is upholstered with dark green velvet trimmed with white rather than a competing pattern. 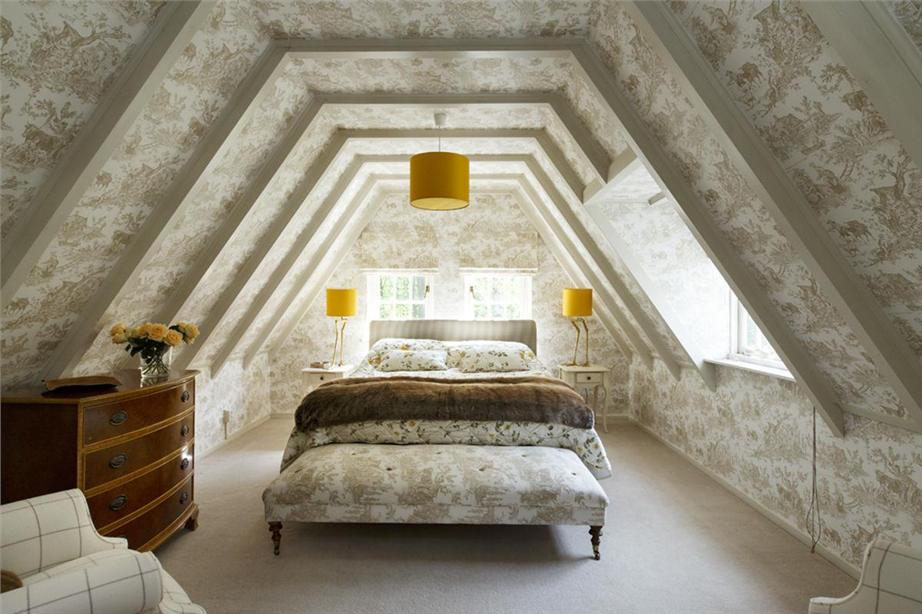 A taupe-on-white Thibaut toile cranks down the intensity in a Dutch attic master bedroom. Tamed also by the architecture, and paired with a different print fabric on the bed, the tone-on-tone toile it almost looks transitional although it is used in the traditional way on walls, ceiling and for the ottoman. I love the subtlety. 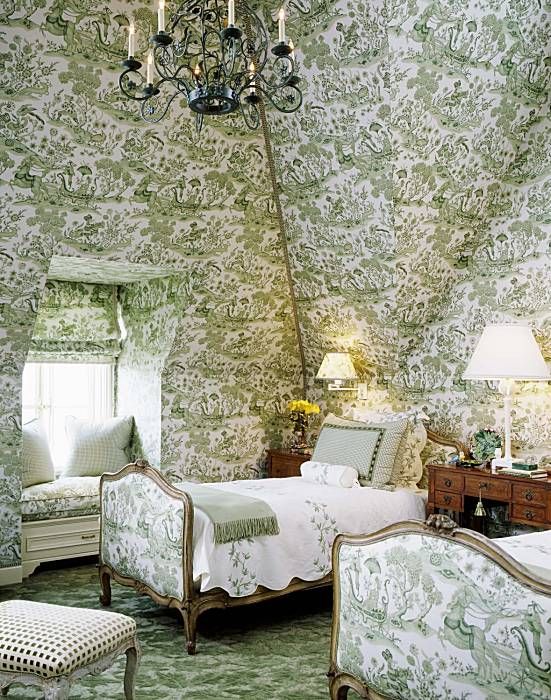 A dense and exotic Grey Watkins green toile, called Enchanted Forest, was used to the nth degree by Tucker & Marks, San Francisco designers who specialize in traditional interiors.  No matching wallpaper in this top-floor bedroom of a Beaux Arts townhouse — walls are fabric-upholstered with gimp covering the seams. And here, everything matches including the Roman window shade, window seat cushion, and the upholstered French provincial beds. Exquisite bed quilts with coordinating motifs and equally beautiful pillows help complete the full-on 18th century look. 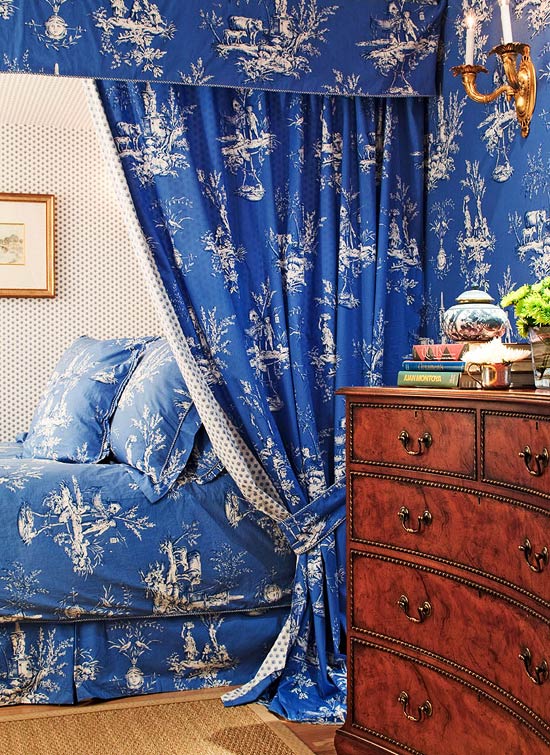 Most boisterous of all is the unconventional French blue Duralee toile, with white reverse pattern. In a Washington D.C. row house filled with vibrant blues and greens, designer Mary Douglas Drysdale used the toile for the bed skirt, cover, pillows, walls plus the swagged drapery on the bed niche. A small scale blue print on white background lightens up the look of the wall behind the bed without any loss of impact.