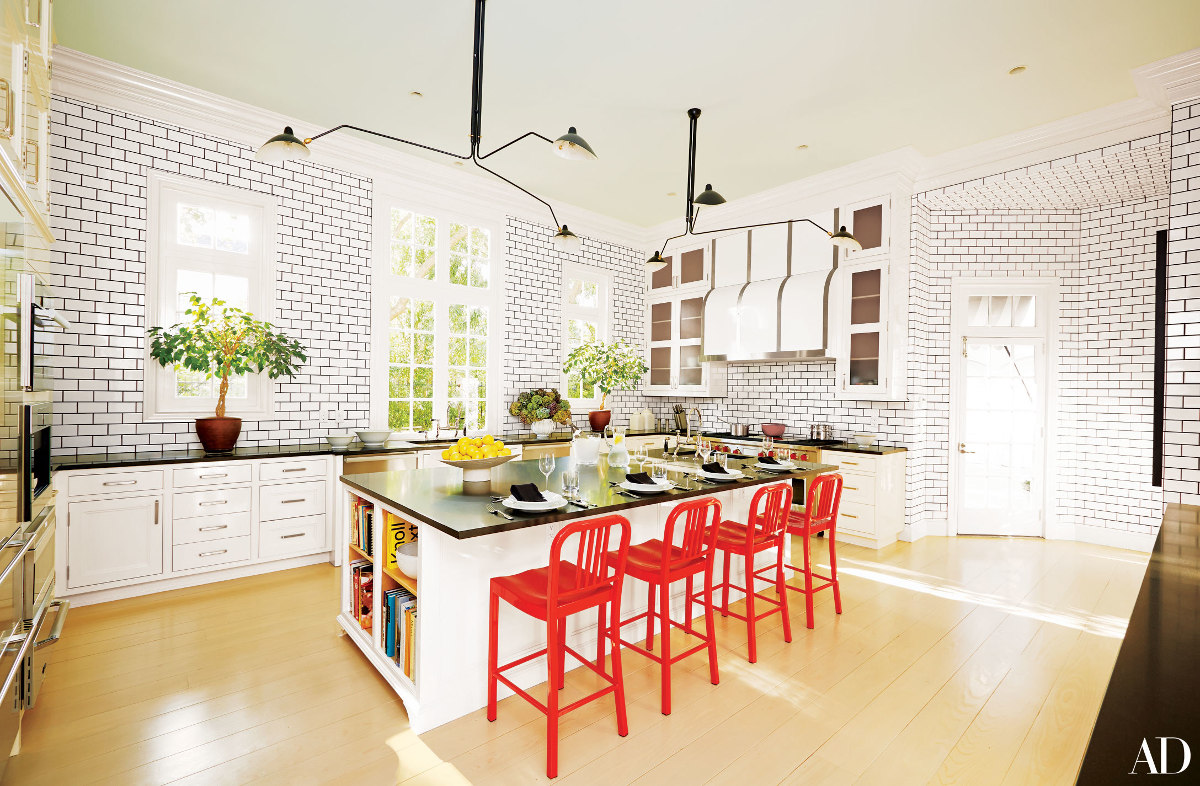 Did I miss something all the gurus know? Will my house feel outdated? No worries! This year’s effort by Architectural Digest promised to explain what’s coming for 2016. Instead it delivered ongoing themes and gentle swipes at the continued popularity of what Elissa Cullman called “relentlessly midcentury spaces.”  To be fair, it’s easy to say what we already see. Speculating on what’s coming feels like trade show gossip.

The closest we get to tech is the barest glimpse of an appliance wall in a spectacular black and white Houston mansion kitchen by Miles Redd [top].  Check out the far left side of the photo. I see a speed oven, built in espresso machine and a warming drawer next to a built in refrigerator. For me, those new appliances are key because what the high end of the market does is copied by everyone else. Apart from appliances this kitchen embodies the “second decade” look for the ever popular black and white kitchen. That aesthetic was established by the iconic 2004 Something’s Gotta Give kitchen which grabbed us by the eyeballs and didn’t change much for nearly a decade. The Wolf range and custom Modern Aire hood remain standard elements. But this kitchen moves the dial by exploding the white subway backsplash and maxing it out on the walls in a style similar to the gray Subway Tile Eurosplash Kitchen I wrote about last year. It replaces pendants with sculptural minimalistic light fixtures and updates with color on the stools. Going light on the floor adds a greater feeling of space as well. No upper cabinets on the huge window wall lets all darkly grouted tile dominate and emphasizes surfaces. Simplification creates the newness here.

The idea of moving forward brings me to half a dozen ongoing trends mentioned by top designers. None of these break new ground. And at the risk of trying to embroider on a difficult fabric I do feel they merit a little embellishment.

Trend #1 Minimalism with a Twist

Miles Redd talked about the called “a shift toward a kind of minimalism.” While the Houston kitchen is minimalistic for him, the idea of architectural minimalism — flat planes and no curves — has been slowly moving to the center. 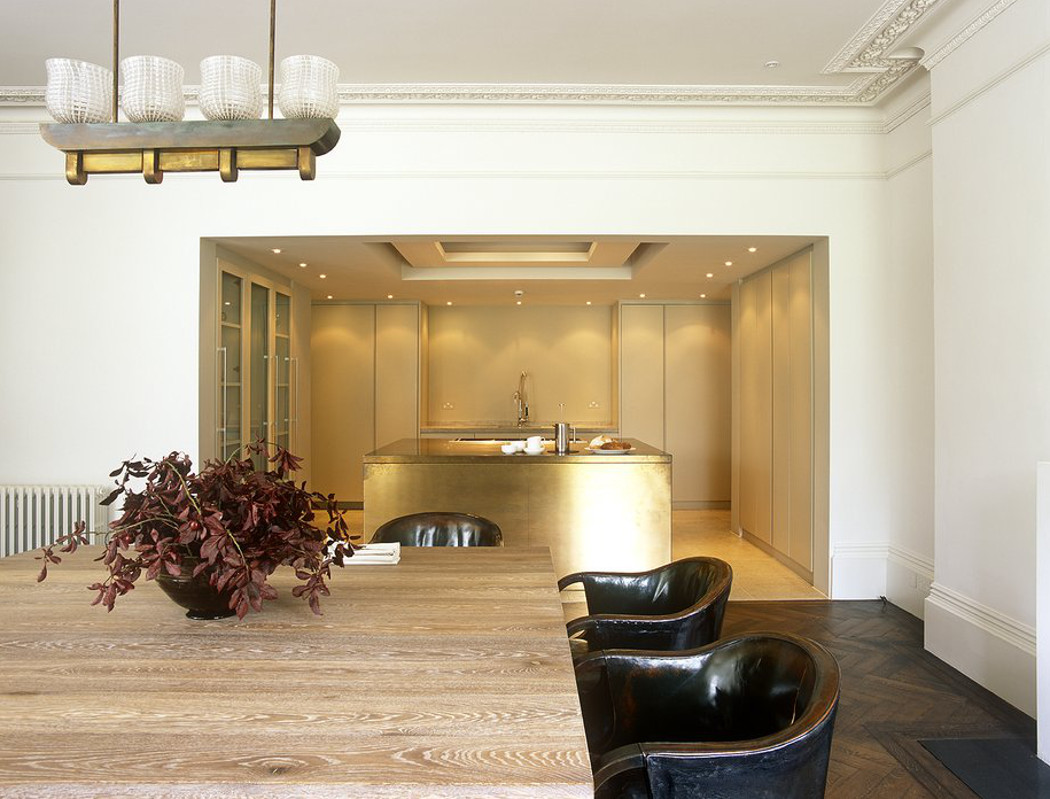 John Minshaw’s Gilded Island kitchen, which I wrote about in 2013, fits that definition. 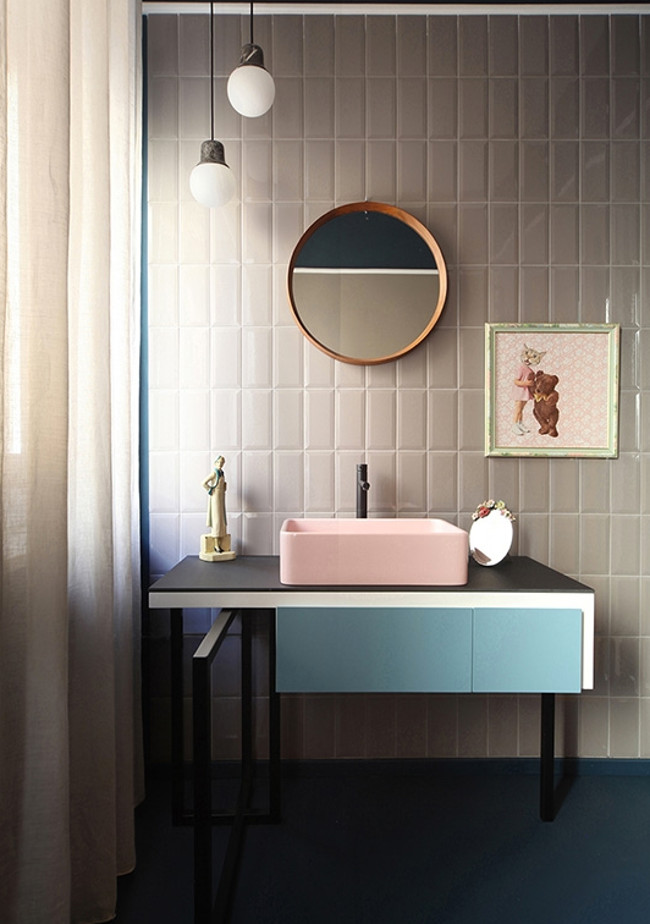 And the work of the Italian architects Andrea Marcante and Adelaide Testa, of UdA Architetti in Turin, is minimalistic but also injects color in an aesthetic where neutrals tend to reign.  This little girl’s bath, in a renovated apartment in Turin dating originally from 1935-37, manages to presage Pantone’s 2016 Easter egg colors of the year — Rose Quartz and Serenity.  The sink by Simas and Flaminia Ceramica is pure 1950s pink paired with a Bellosta tap. The vanity design references Memphis, and there’s a twist with a dark blue Rezina resin floor. Let me go on record as stating that Rose Quartz and Serenity make me gag. The “twist” makes them work here. 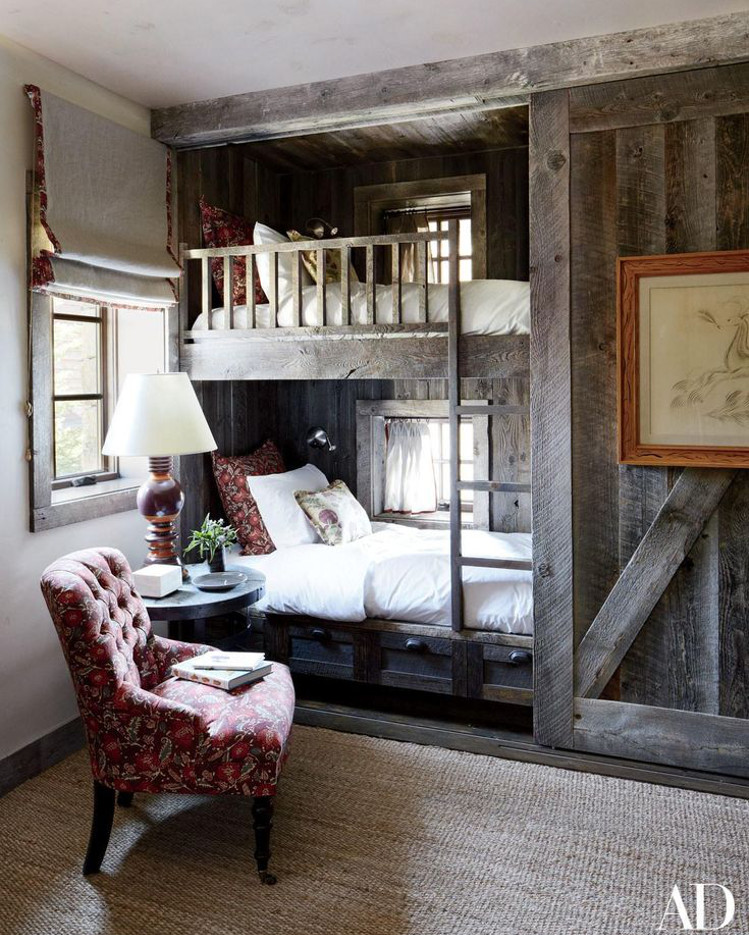 It’s safe to admit that Atticmag is a bit obsessed with repurposing. Allison and I have both written numerous posts on this subject dating back to 2010, including  the post on my Cinderella Fireplace that detailed my hunt for a salvage mantel that would transform my fireplace. Reusing barn wood in various parts of the house is part of the repurposing trend cited by New York designer Markham Roberts who said he hopes “people will think more carefully how to reduce waste and creatively repurpose existing things.” The barn wood in this bedroom of his design is a great example and there are more in our Barn Wood Kitchens post. 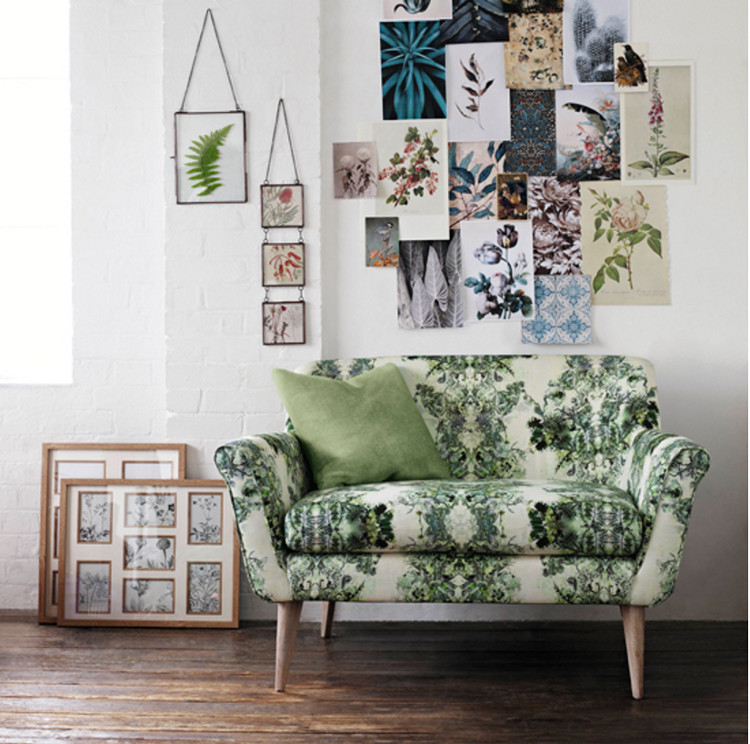 I was a bit surprised by the great Madeline Stuart’s remark that “ We’ve been on a solid diet of solids for far too long.” While that may be true at the high end, I have seen wonderful modern prints used on upholstered furniture for years. The British love of botanical chintz shows up in this two-tone print Marks and Spencer Harper Love seat in Aristo that House to Home featured for Spring of last year. Note the splayed legs, a detail from mid-century modern. I think the 20th century is the new 18th century for home décor. 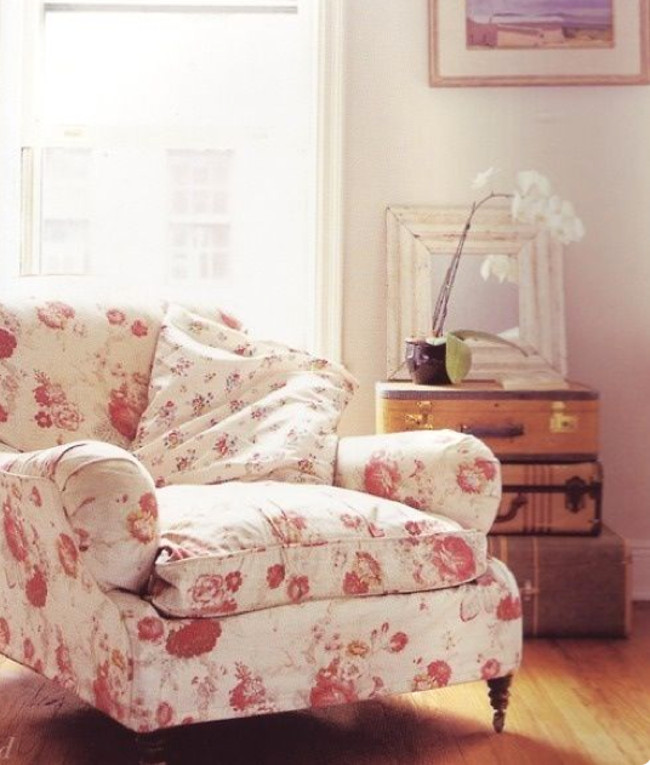 Rose chintz seems to be the new kid on the block right now, emerging from the cottage and boho looks. This super sweet chair is covered with Waverly’s 54” wide Norfolk Rose fabric, which runs $13.95 a yard from the OnlineFabricStore. 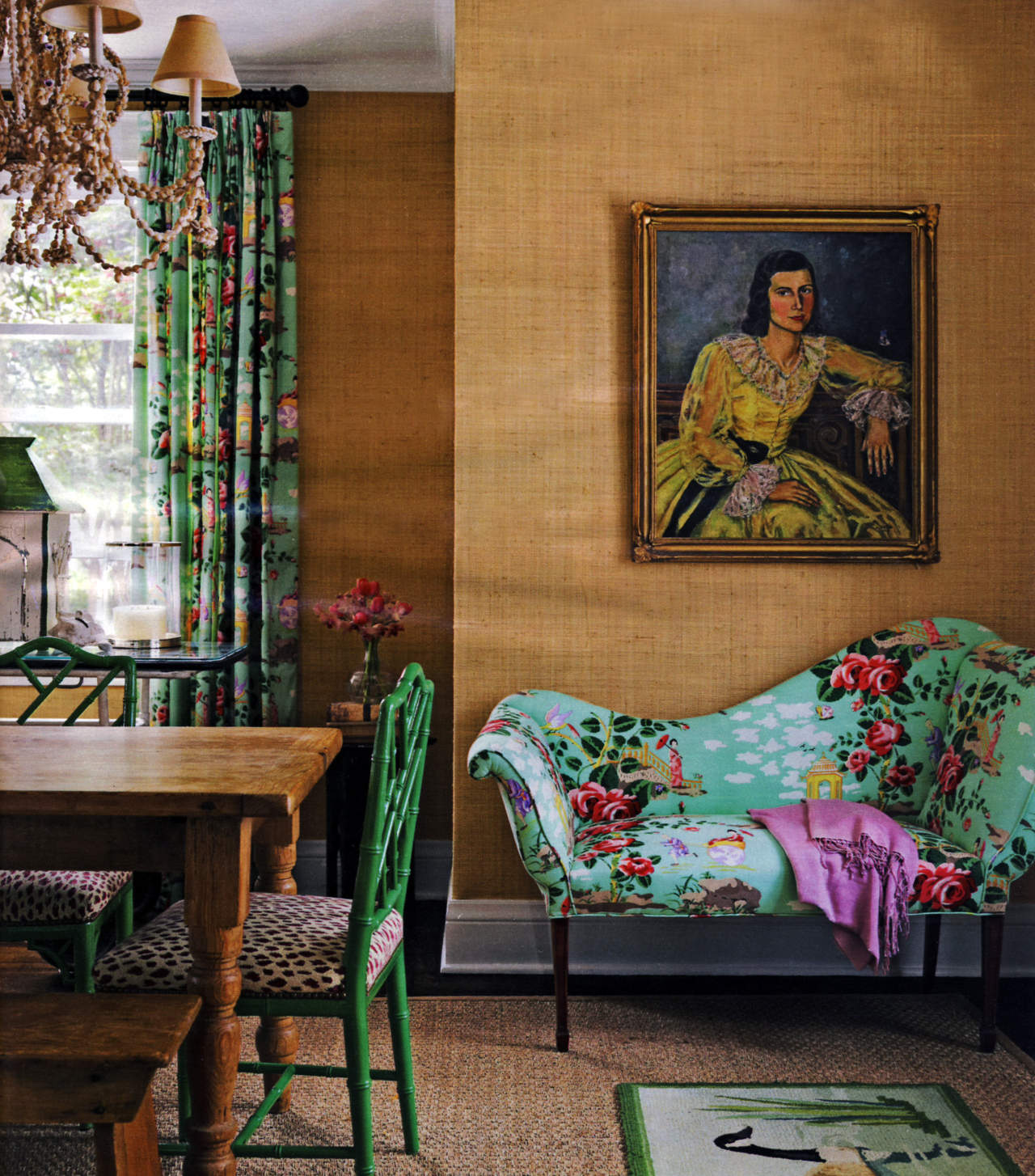 Anthropologie has been pushing lively print sofas for a very long time and while my first Boho Sofas piece dates back to 2011, prints were emerging back in 2009 when this room from a Long Island New York home showed up in Country Living. 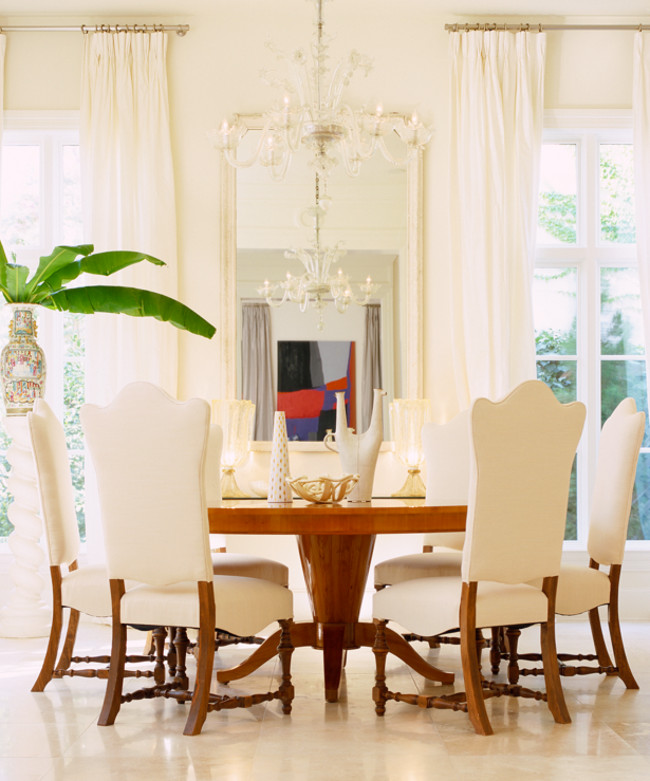 Texas designer Jan Showers stated it well: “I adore wonderful colors, but I feel a change in the air. It seems that our clients are loving ivory, alabaster, eggshell, bone, and creamy neutrals in their rooms, with comfortable seating.” Showers certainly understands that ‘what’s old is new again’ just may be the golden rule of home décor. 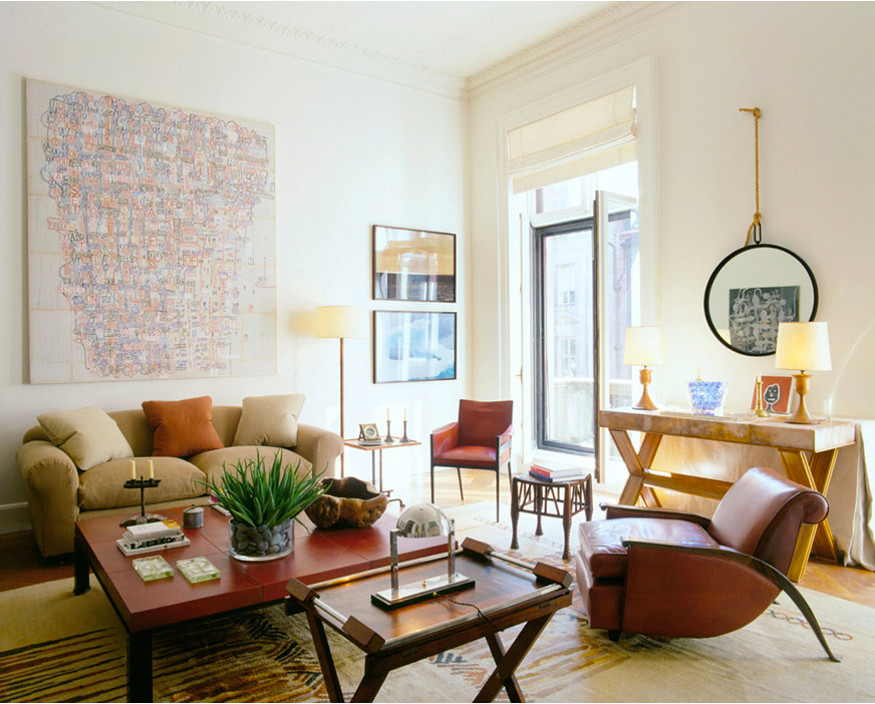 “I think people are yearning for individuality,” said Alexa Hampton whose father was the famed designer Mark Hampton. If that’s true, a designer like Robert Stilin deliver just that with interiors like this New York apartment where pedigreed furniture is both comfortable and unstudied. 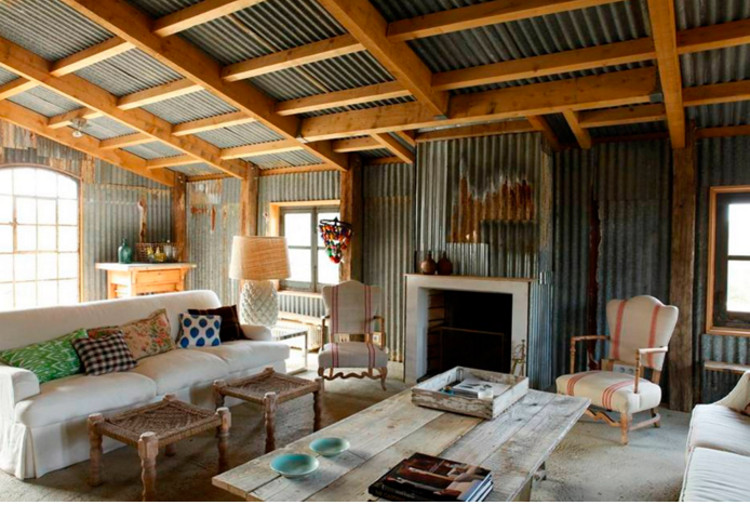 Isabel López-Quesada always manages to push individuality and originality and has been doing just that for a very long time. No better example exists than this López-Quesada room with corrugated steel walls in Biarritz. 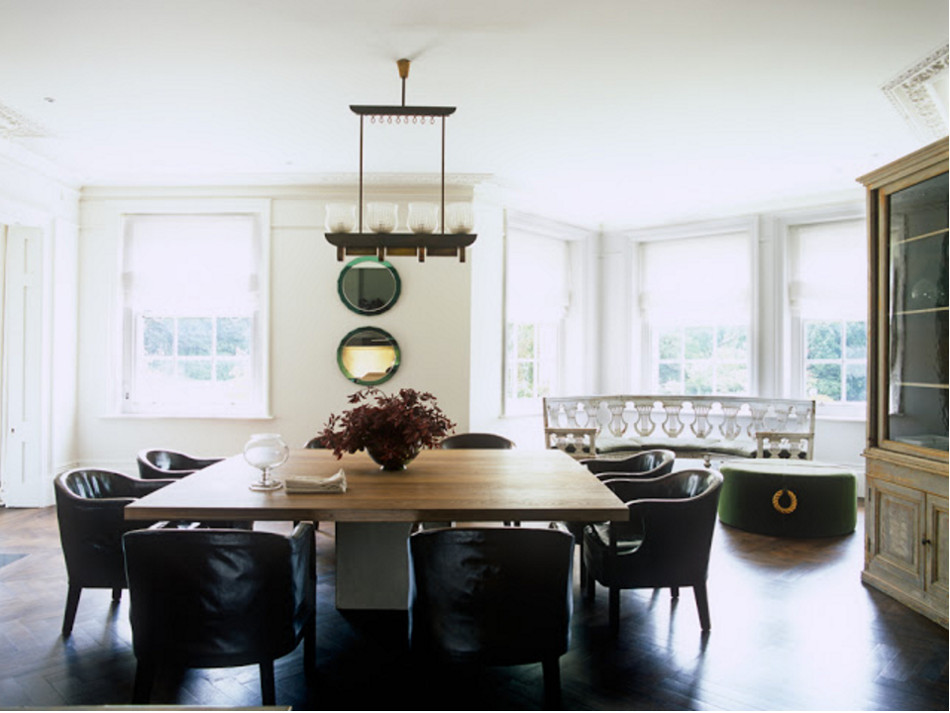 My reaction to this being a new idea is pretty sarcastic. In a word: duh. Sure, some people crave historical interiors be they Single Pattern Rooms in the 18th century style or Danish modern bedrooms. But mixing old and new is a long established idea. For my money, the master of the mix is John Minshaw. The leather armchairs with a contemporary table, chandelier and mirrors works amazingly well with a Swedish lyre back bench and weathered breakfront in this dining area that’s adjacent to the Minshaw kitchen (above).

With all respect to the designers who were asked to forecast home décor trends, I believe trends move so slowly it’s difficult to quantify what’s new vs. what’s old, or what’s in vs. what’s out in any given year. I think the glacial pace has two roots. First, it takes a good deal of repetition over time (or a hit movie to go to video) for any look to take hold. Second, personal taste and the way we live develops slowly — even though we can buy some things quickly. So changing anything significant in the house, any physical restructuring also produces an emotional upheaval. It’s one thing to embrace new ideas and another to be obliged to live with them. We second guess. We worry about cost and comfort. We wonder how something (be it a look or an object) will wear over time — not just this year.