You are here: Home / Cooking / Two Soups in One Bowl
Jump to recipe 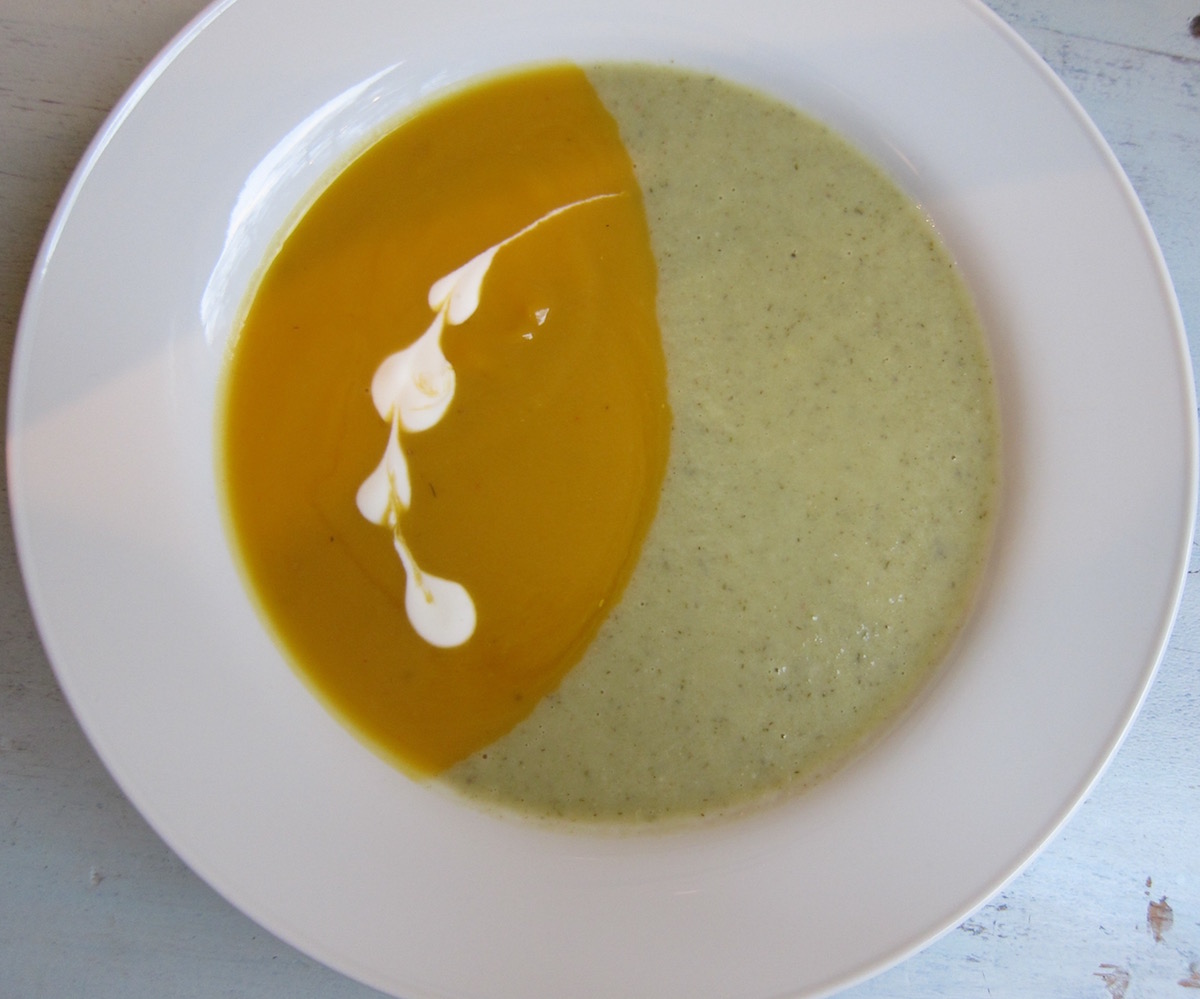 Two soups in one bowl makes a most festive first course for a holiday or special occasion meal.

I’ve served this pureed vegetable soup duo on many occasions and these two soups in one bowl always elicits surprise both for color and the combination of flavors. Both soups are straightforward vegetable purees, brightened with acid and extended and lightened in color with a small amount of half&half.  The pale green and orange colors also a natural couple that fall opposite each other on the color wheel. Fennel isn’t the best known vegetable. It’s appears on many Mediterranean tables, most notably Italian, where it is served in many ways from raw and shaved to braised. With a flavor like mild licorice-celery, it pairs nicely with the sweetness of the butternut squash. 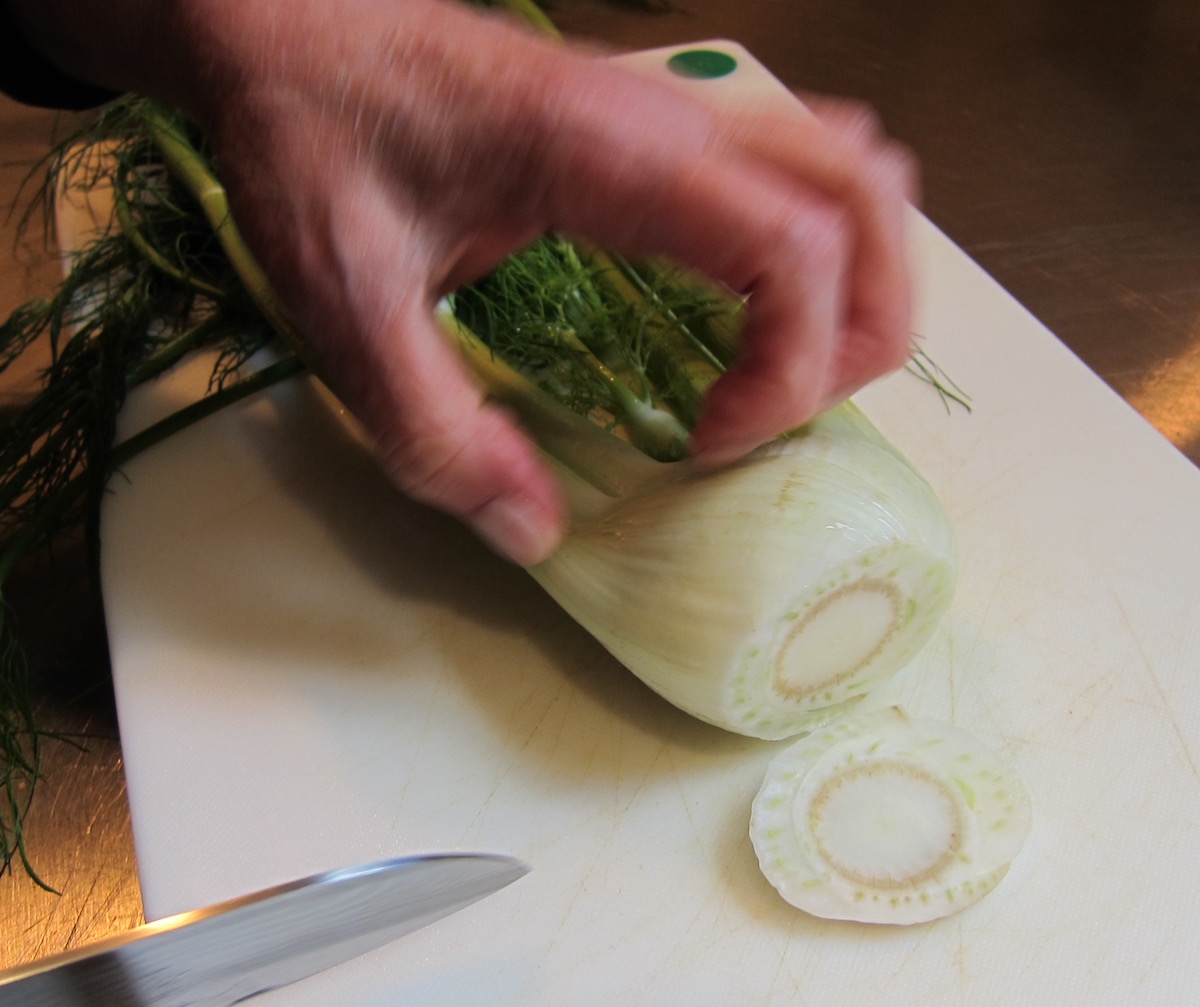 Preparing fennel is easy. First, cut the bottom off the bulb and trim back the stems. 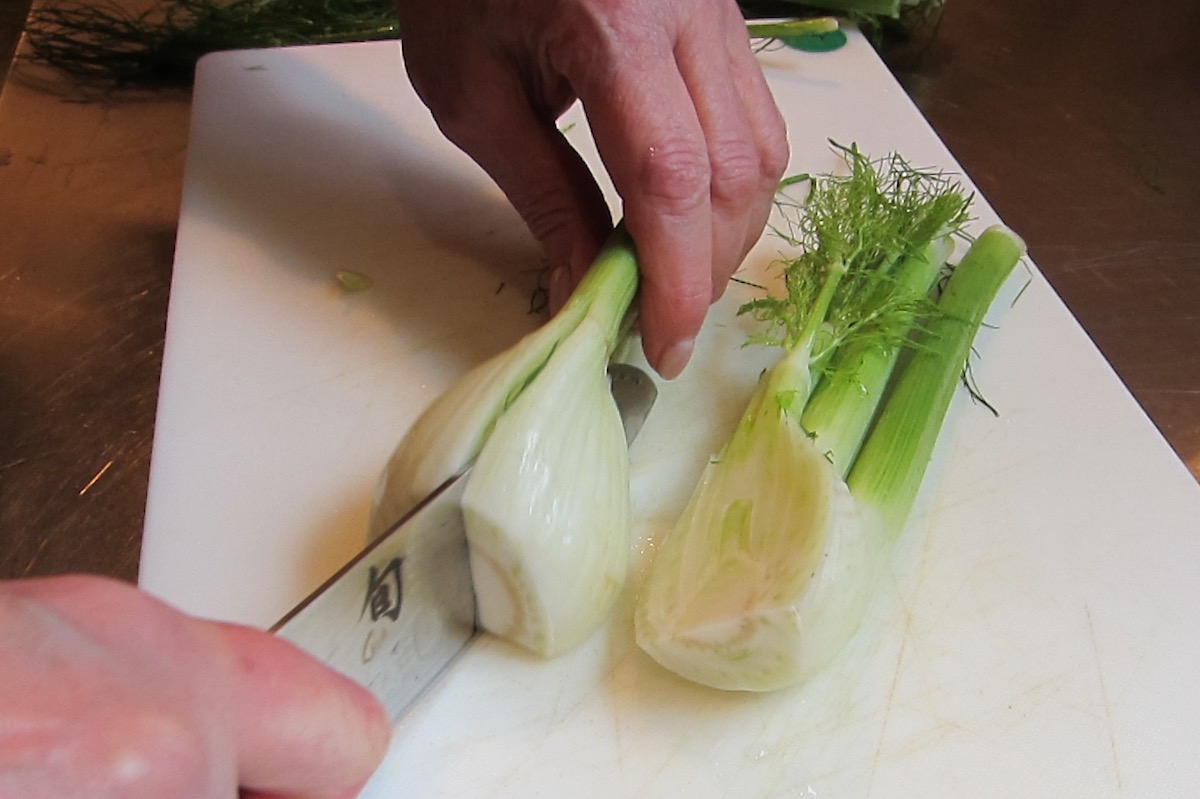 Quarter the bulb lengthwise. Then cut everything crosswise into slices, including all the flavorful green fronds. They are a cousin of dill. 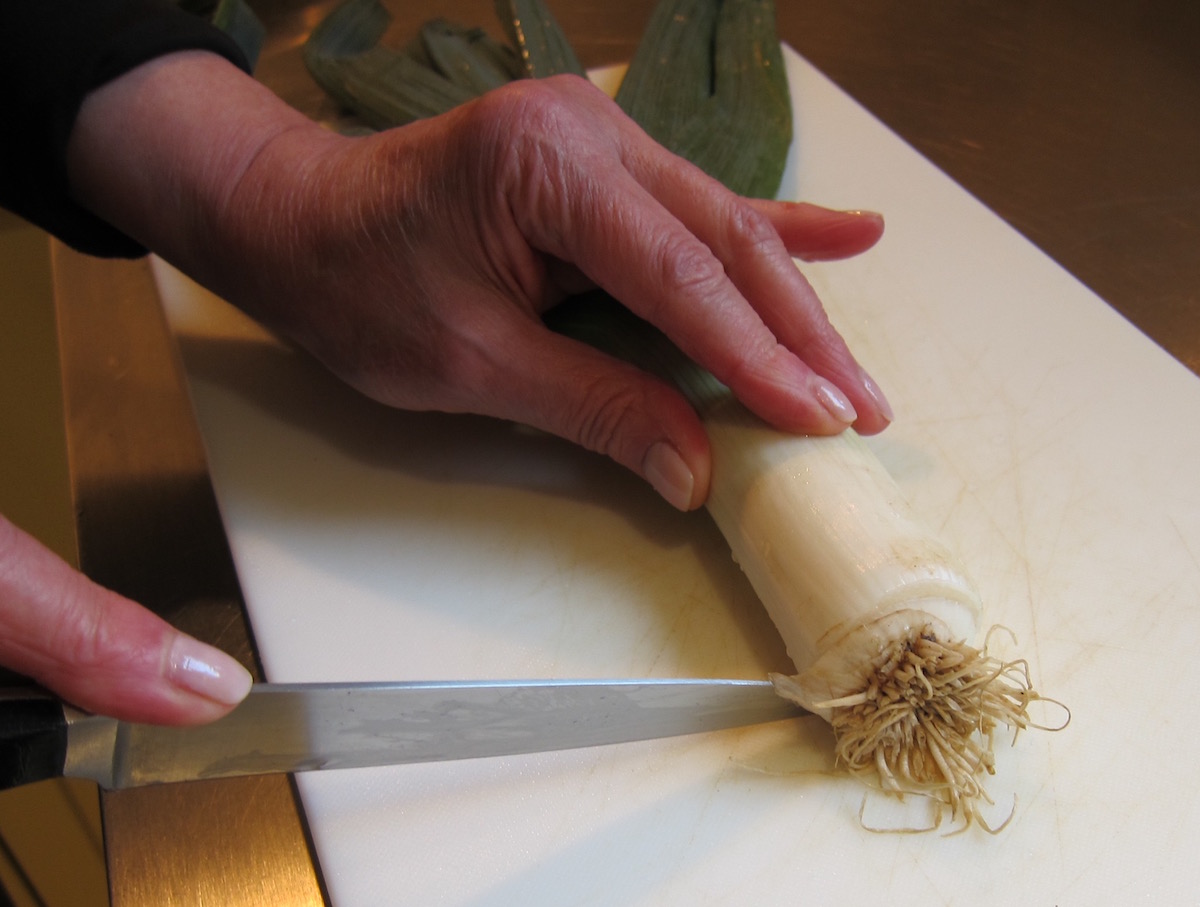 Prepping a leeks begins the same way. Cut off the tip with the roots. 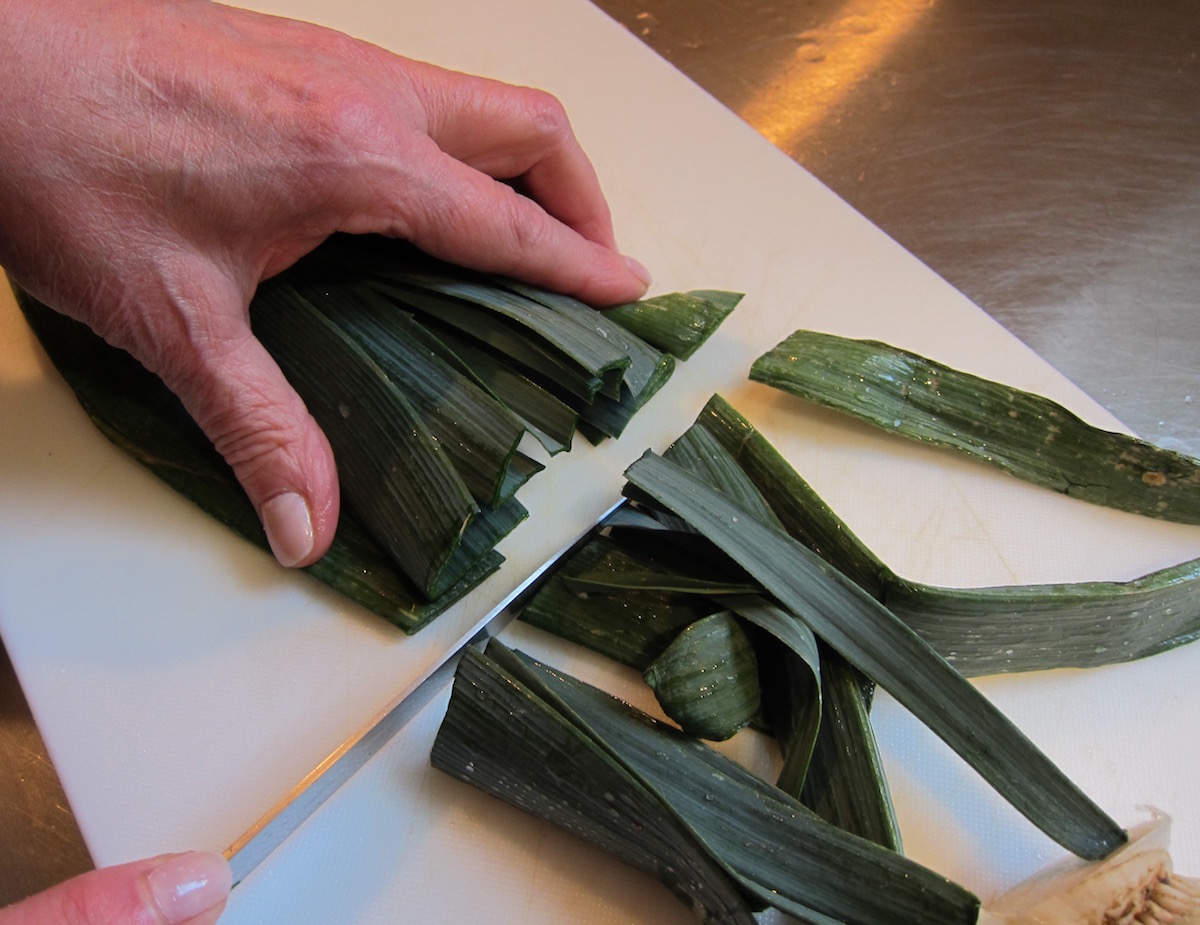 Cut off the dry ends of the dark green top and reserve for use in another soup or for broth. 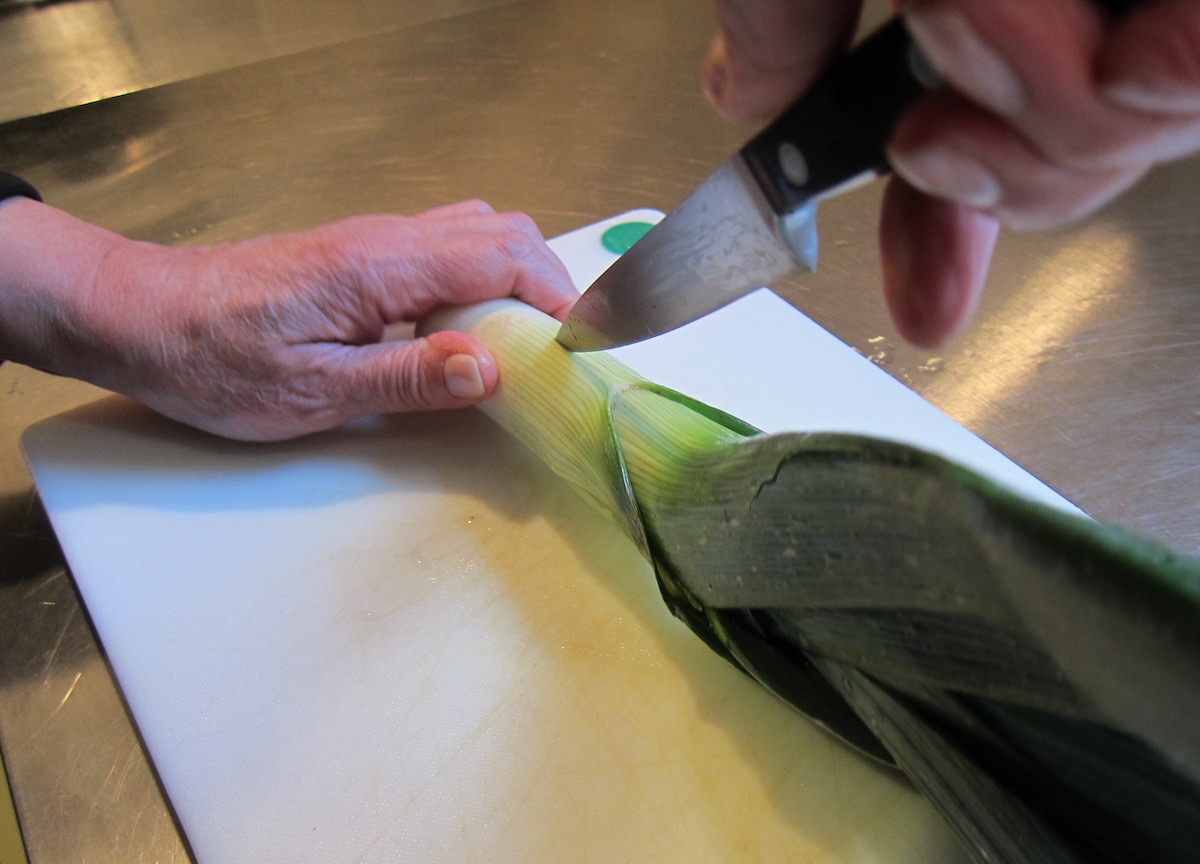 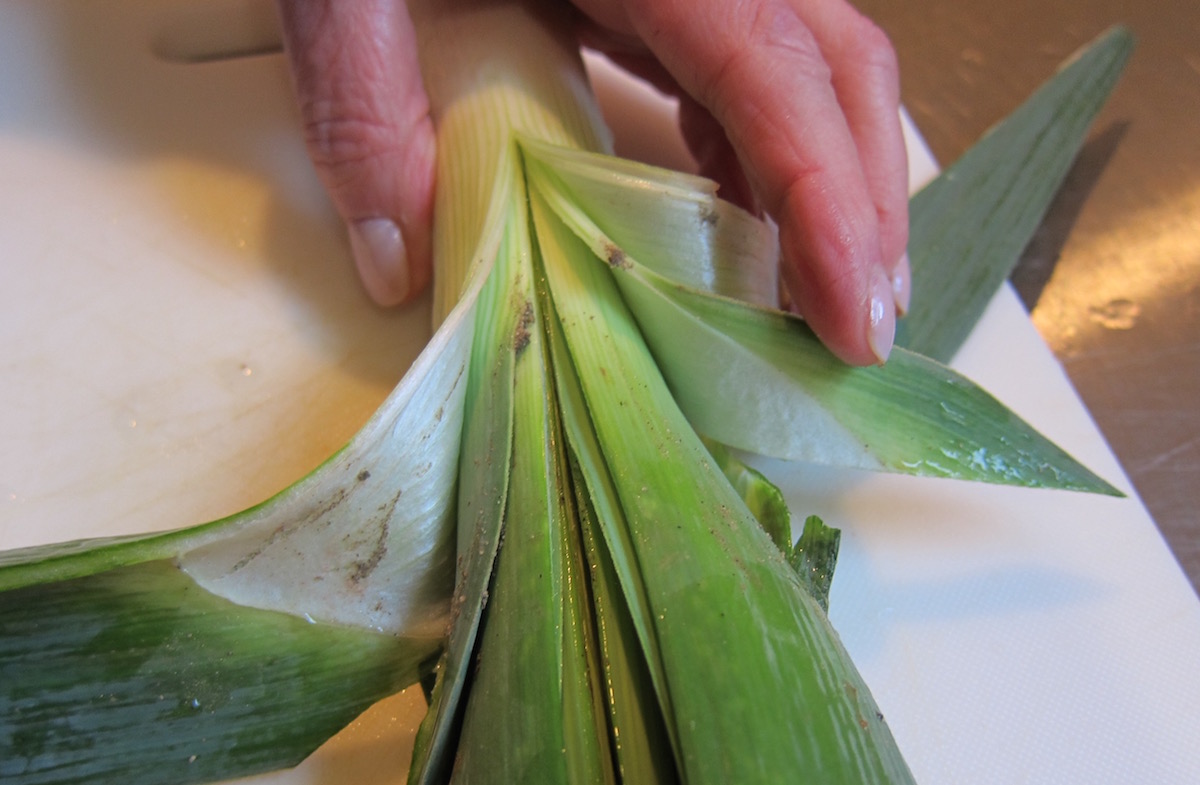 Then give it a quarter turn and split it lengthwise again to open it up. There usually is a good deal of sand between the leaves. 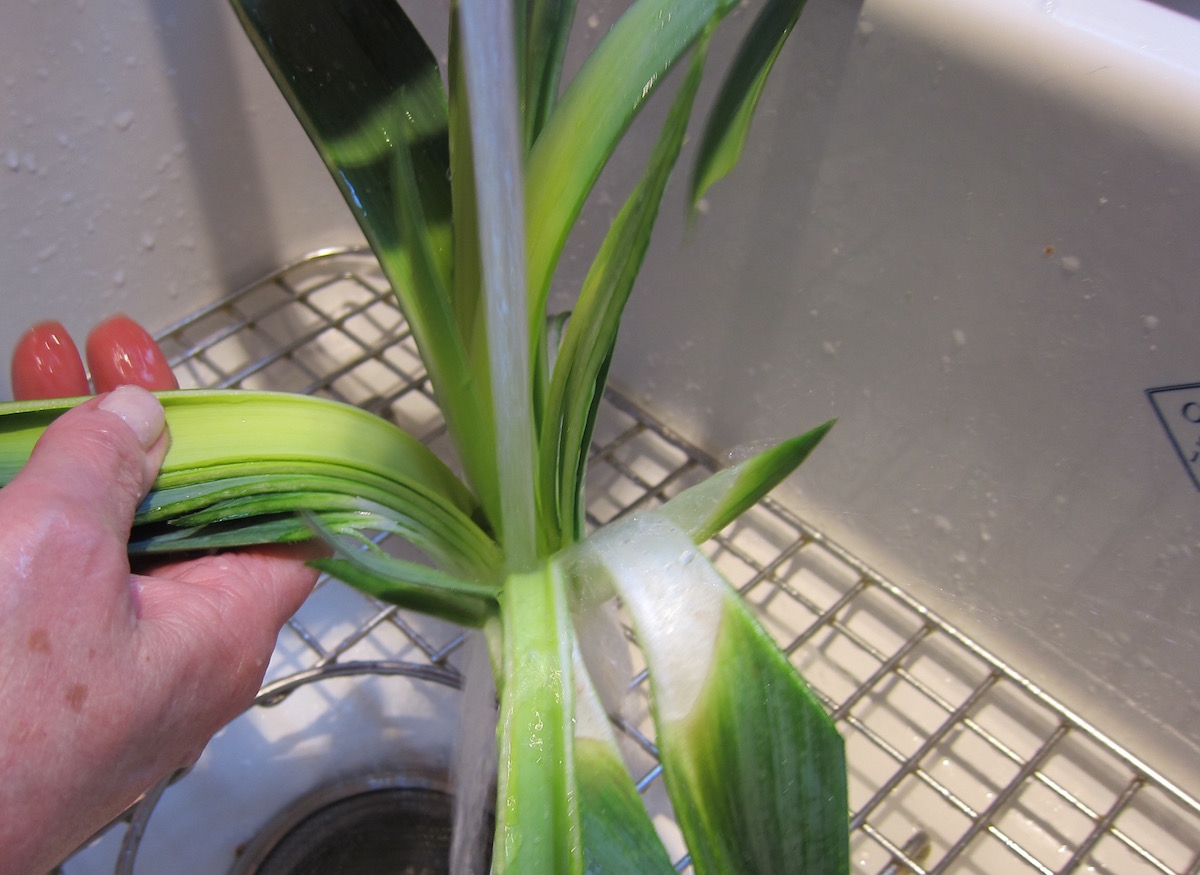 Rinse the leaves under running water to remove all the sand. Cutting it lengthwise allows the fibrous leaves to open like a flower. 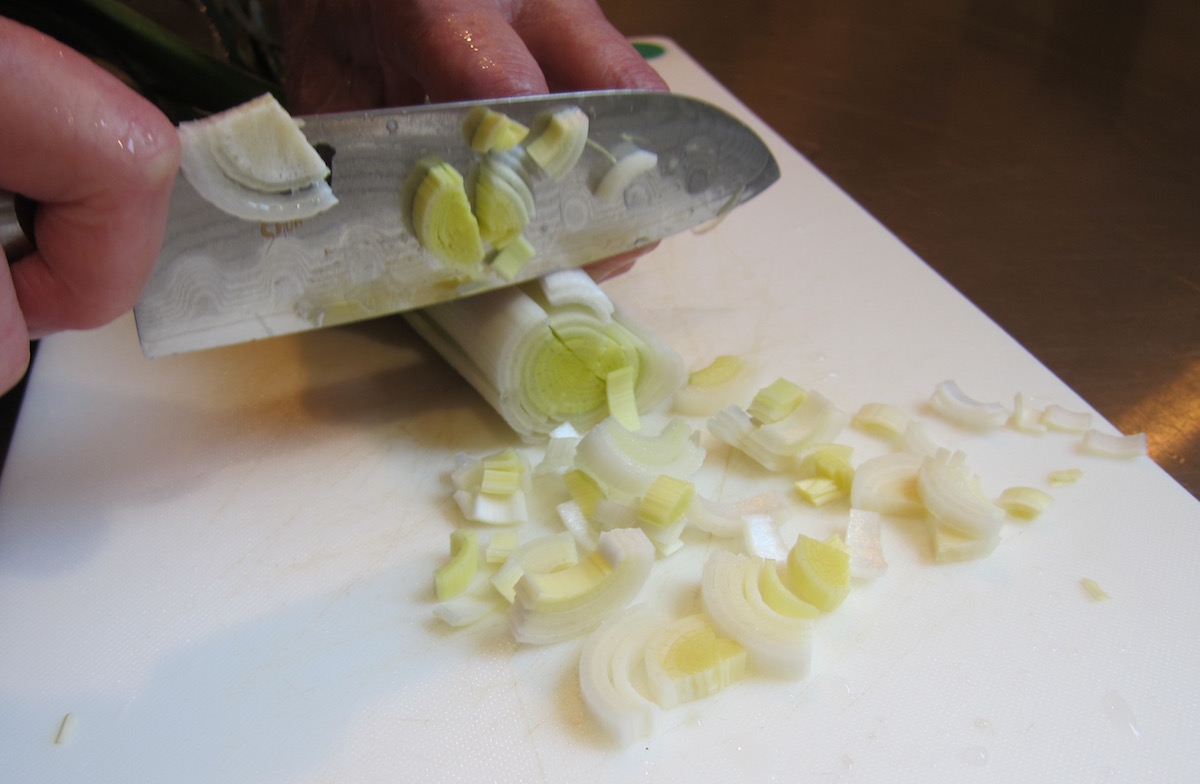 Then cut the white part crosswise for use in these soups or any other recipe.

The backbone of the soups, however, is my enriched chicken broth — ebroth for short — which I make by simmering the carcass of any cooked chicken, half an onion, a few celery leaves and some dried thyme with commercial chicken broth, covered, for about 45 minutes.

It’s important not to let the broth simmer too quickly — this video shows a good rate for that. The most intense broth results from cooking any chicken frame (all the bones stripped of meat and skin) with 1 quart of boxed broth but that can be stretched to 2 quarts. 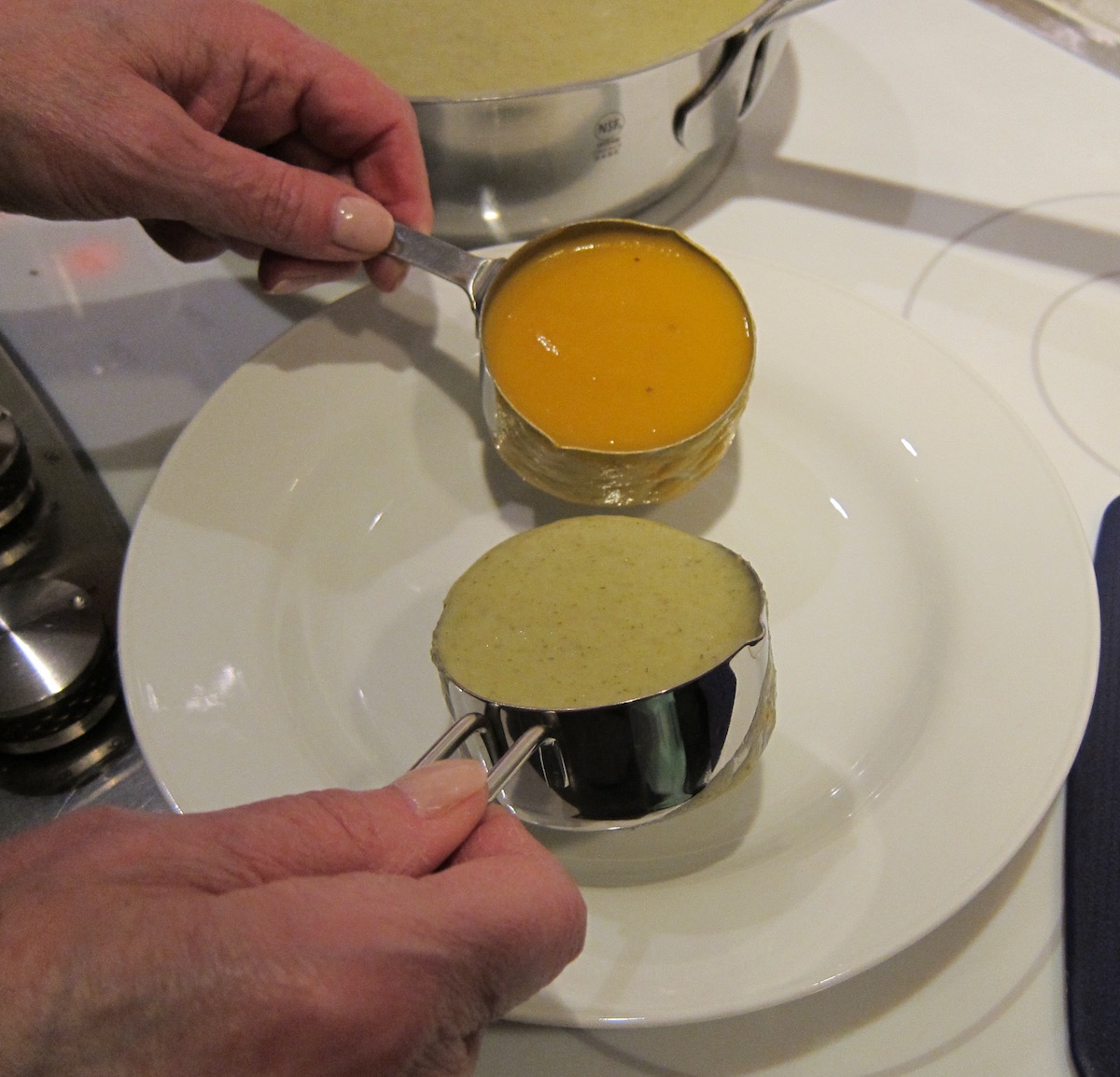 The only tricky business is setting up the assembly line of warm bowls for the two soups — with the garnishes at the ready — and then ladling the simmering soup into each one. Serve immediately! With family and guests on hand at the holidays there should be no short supply of willing helpers to ferry the bowls to the table.

Two Soups in One Bowl 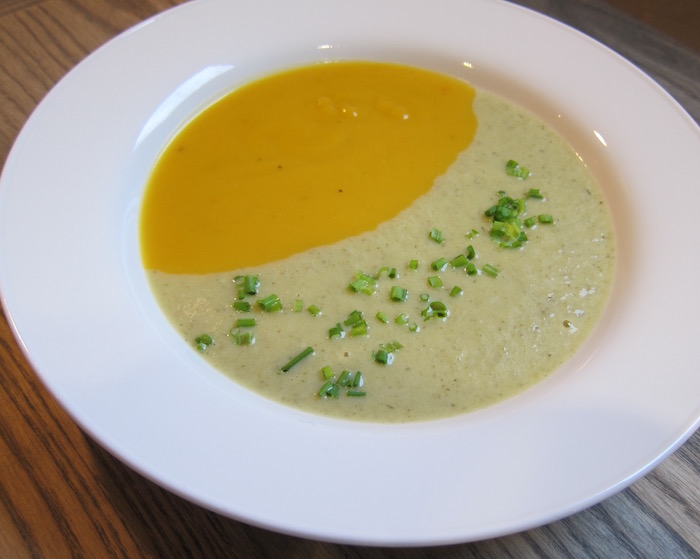 JaneSense
I am very fond of pureed vegetable soups. I always blame Vichyssoise which I ate as a child. For me they are comforting and delicious as well as healthy.

Cutting through a butternut squash takes a good deal of hand strength. I usually do that with a cleaver if I’m using whole squash. Then the thick skin needs to be peeled, seeds scooped out and the yellow flesh cut into chunks. While that yields the best flavor, it is easier to deal with pre-peeled chunks of butternut squash sold in packages. What’s not clear is how long it’s been in the package. But that’s the trade off for making things go more quickly.

Why the white part of leeks only? - The white part of the leeks have a fabulous flavor but won’t change the soup color. And while the white bottom portion of the leek is fibrous, it’s not as tough as the upper green leaves which don’t puree as well. Save the greens and slice them up for use in chunky soups where the make pretty slivers.

Do take the time to enrich the chicken broth. I cook it up every time we finish a chicken and then put it in the freezer until I need it. It offers a huge boost of flavor and once you become accustomed to that extra intensity, you’ll start using it in other recipes — betcha!

Both soups can be made 2 to 3 days in advance. You can likely push that by another day by cutting up the vegetables, bagging them and holding them overnight.

Chives can be minced several hours in advance. I usually keep them in very small 2 oz plastic containers.

Hot pepper sauce - If you’re tempted to reach for the sriracha, think twice. The pureed red chiles is more likely to give the soup a murky color — especially the fennel — than Tabasco sauce, which is what I use.

Leeks - Occasionally I cannot find leeks. Regular white onions can be substituted although the flavor may not be as subtle.

Fennel haters - Other green vegetable soups that could be substituted as a good match for the sweetness of butternut squash would be zucchini with curry.