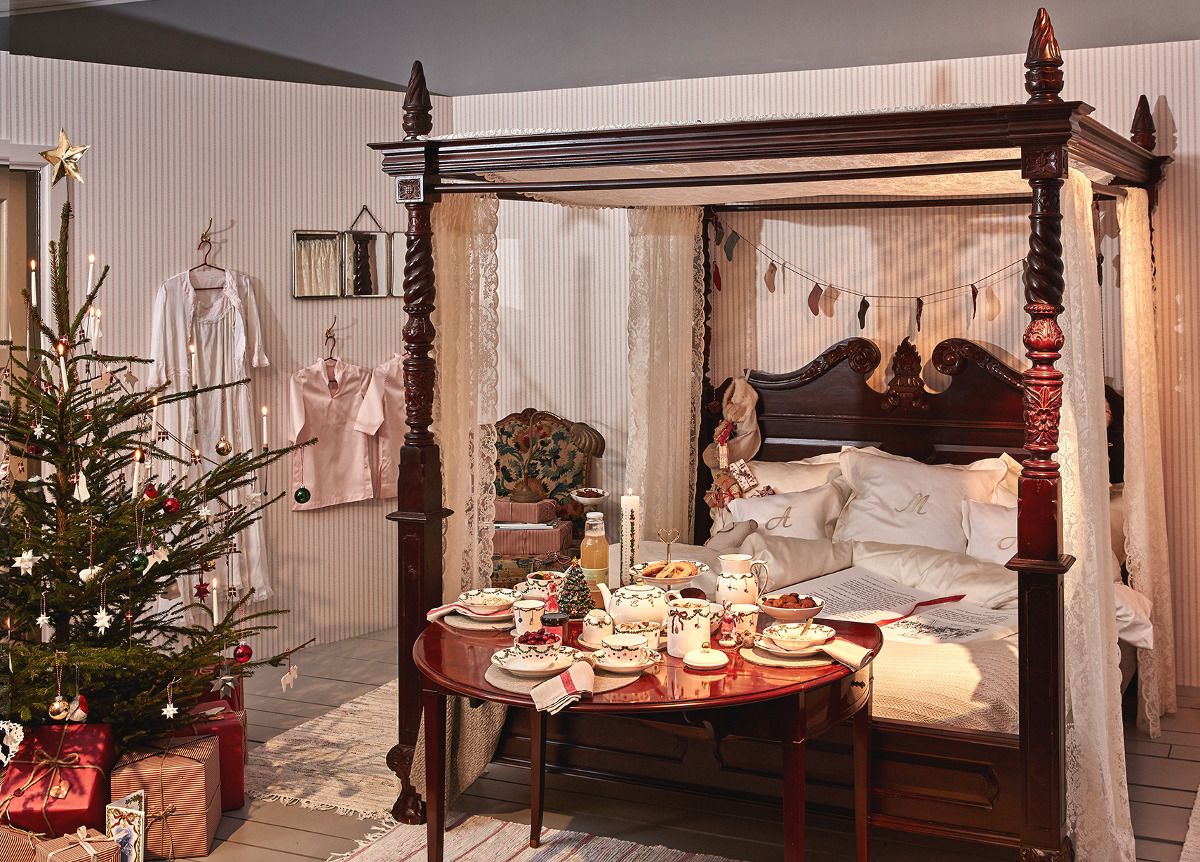 The Royal Copenhagen 2015 Christmas tables debuted November 20th in the porcelain manufacturer’s Copenhagen store. This is the 52nd annual Christmas event which, thanks to the internet, can be seen by millions of tablescape fans around the globe. This year’s theme  “Happy Christmas — Lovely Christmas,” is based on tables created by six leading Danish comedians and entertainers, a group of celebs that may not be well known outside Scandinavia  It’s an eclectic group and I’m pleased to include these Royal Copenhagen 2015 Christmas tables for the seventh year here at Atticmag.

One of my favorites this year isn’t a dining room table — it’s a breakfast-in-the-bedroom set up. A girly, lace-draped four-poster bed is the landing spot on Christmas morning for a mom and two children. There, at the foot of the bed, they can enjoy breakfast on RC’s Star Fluted Christmas service — dishes with their spruce garlands, satin bows, hearts, drums and angels mixed into the swagged border design — while opening their gifts under the nearby tree. 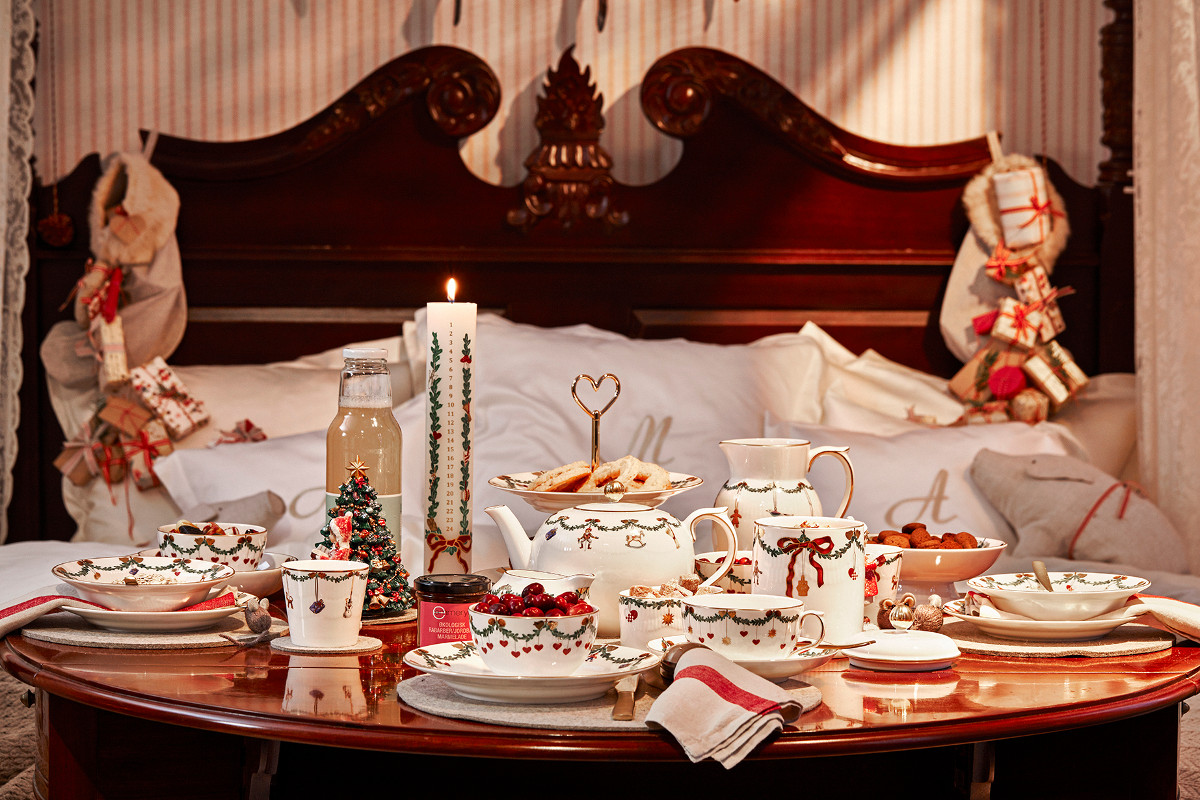 The setting is arranged on an antique gate leg table at the foot of the bed. The Star Fluted Christmas china shows details of the festive design. And Danish actress and comedienne Mia Lyhne as mom/creator, pouring tea. 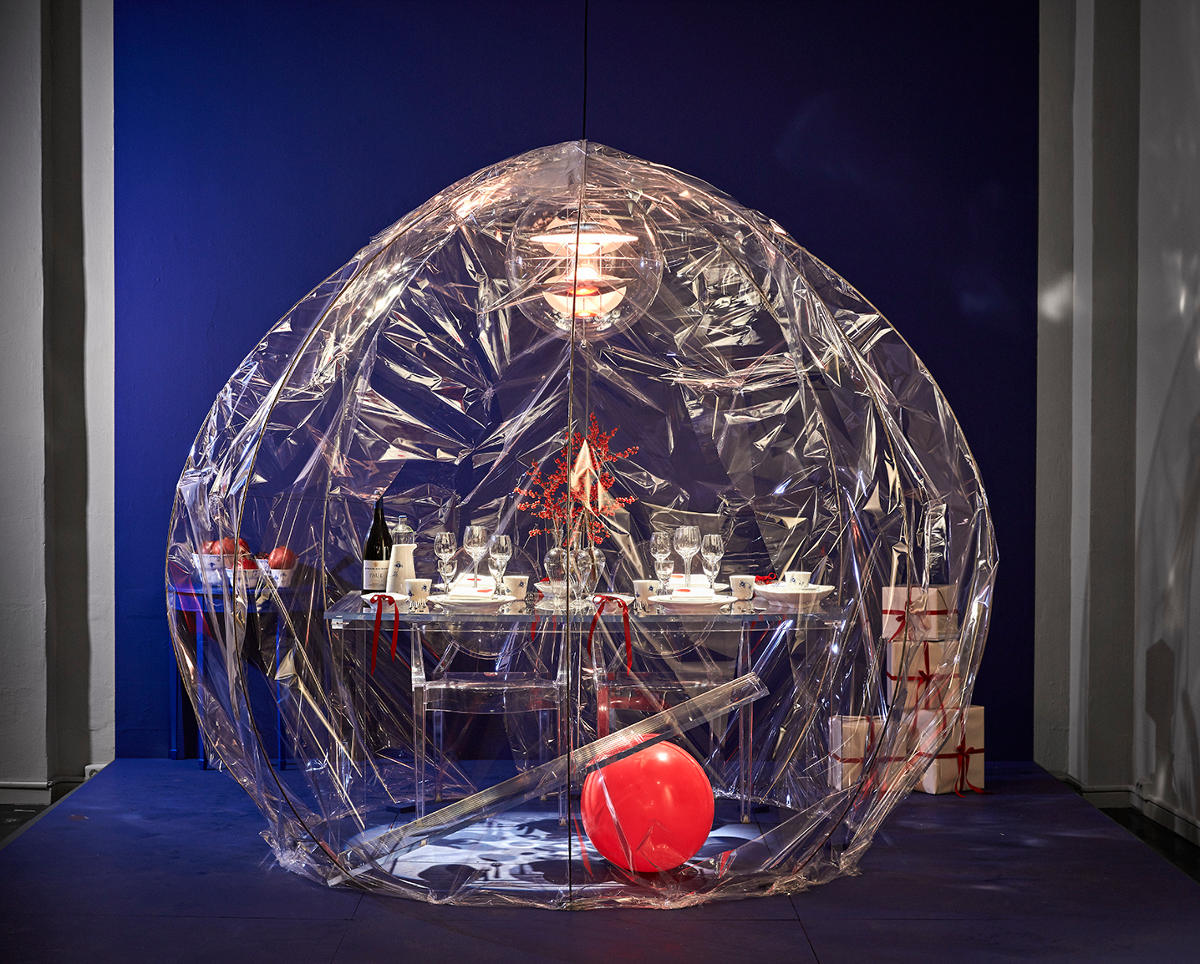 A transparent glass prism enclosing a table against an icy “l’heure bleu” background is the cerebral theme for a table setting by Jarl Friis-Mikkelsen, a TV host and humorist. Lovely, and vey adult, this table is like a visual poem to winter. It exudes iciness, no? 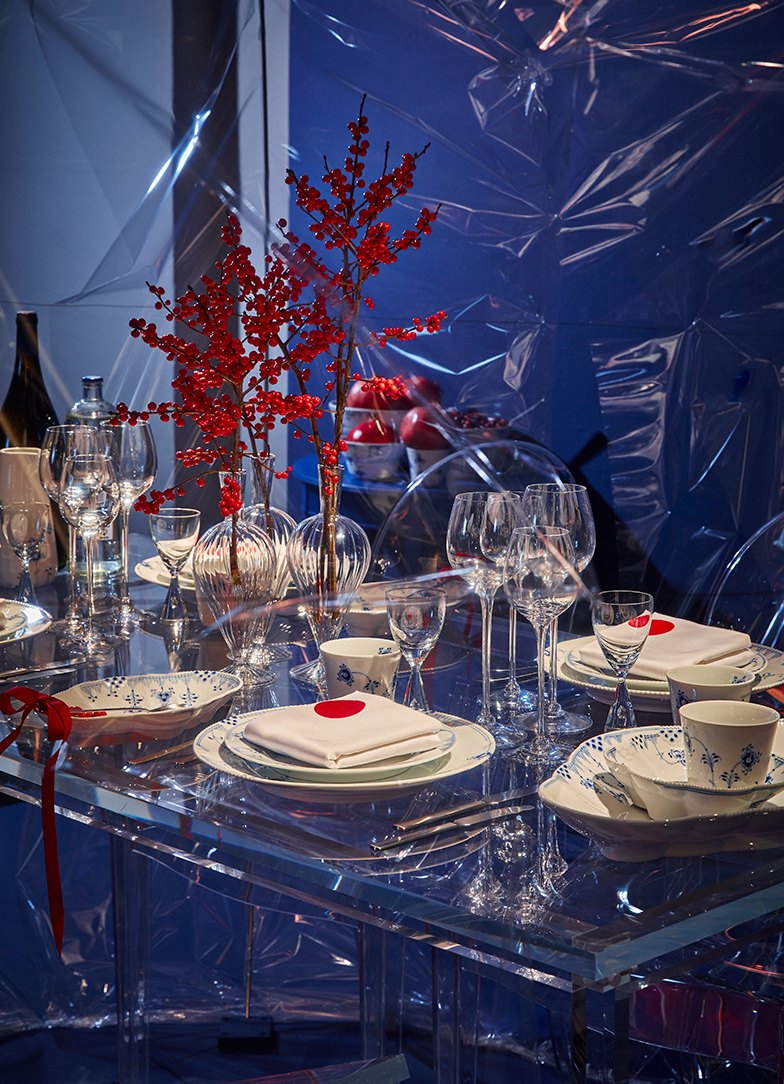 Modern floral Blue Elements place settings blend well with the theme, highlighted by tall crystal goblets and accented by red holly berries, red ribbons. Red dots on each napkin humorously mark the spot that says “you are here” — much like finding where your location on a shopping mall map at Christmas time. 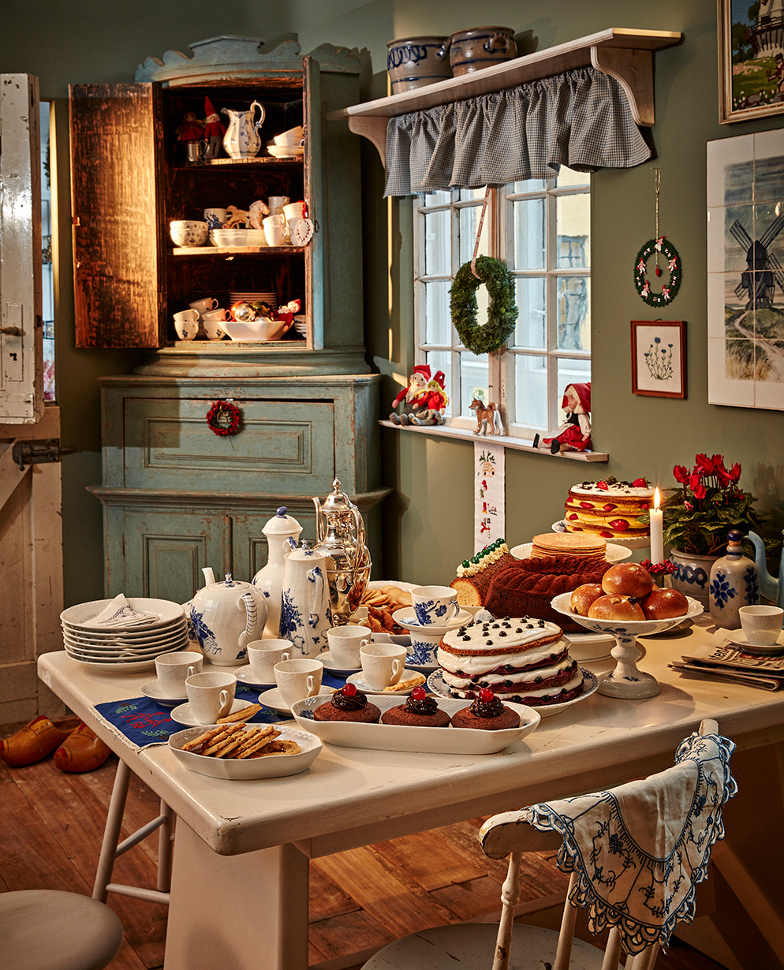 Doesn’t everyone love an old-fashioned Scandinavian farm cottage kitchen with an antique painted corner cabinet and Dutch door? Then there’s the table laden with baked goodies liked cream cakes and the Danish version of kugelhopf. 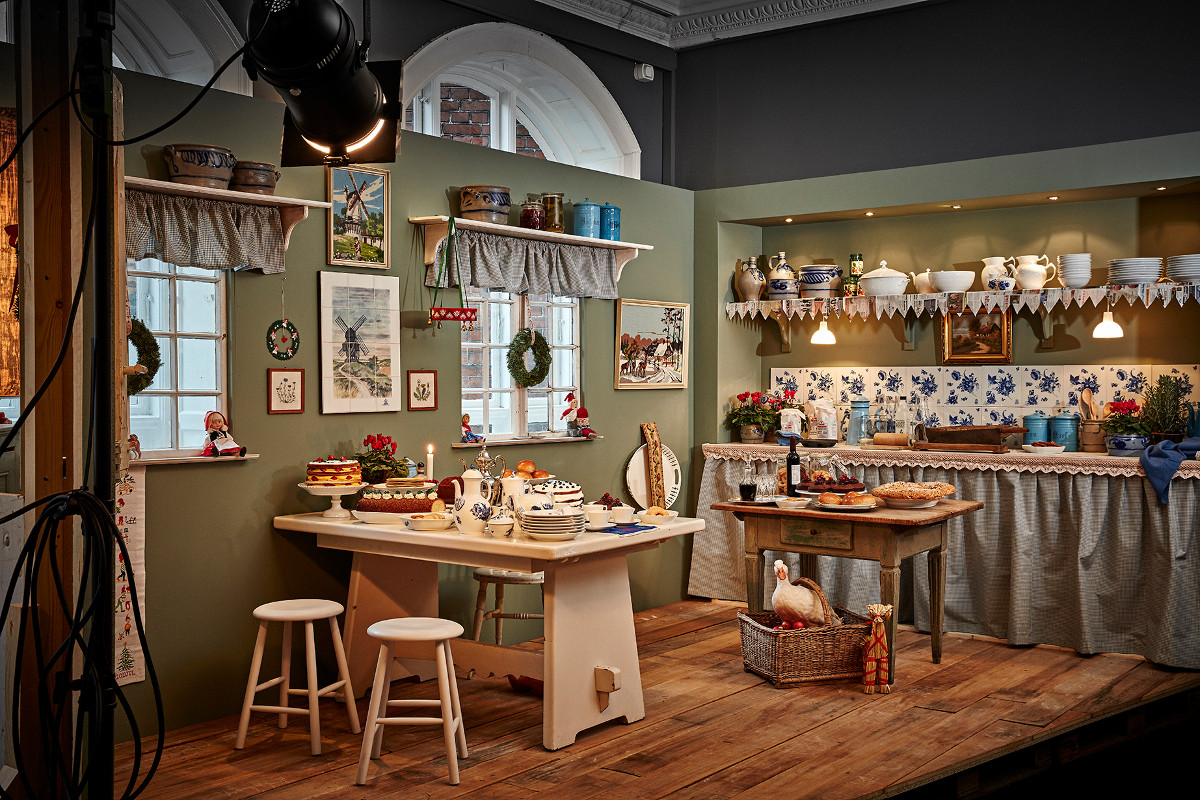 This vignette has a come-on-in-and-sit-right-down warmth embodied by actress Bodil Jørgensen’s South Jutlandic farmer’s wife character in a popular TV series. (South Jutland is the area of the Danish peninsula that borders Germany). The set up is a bit of a fantasy with the farm table and stools, homespun gathered skirted sideboard and display shelves over the window plus a country style Blue Flower tile backsplash (which matches the china). 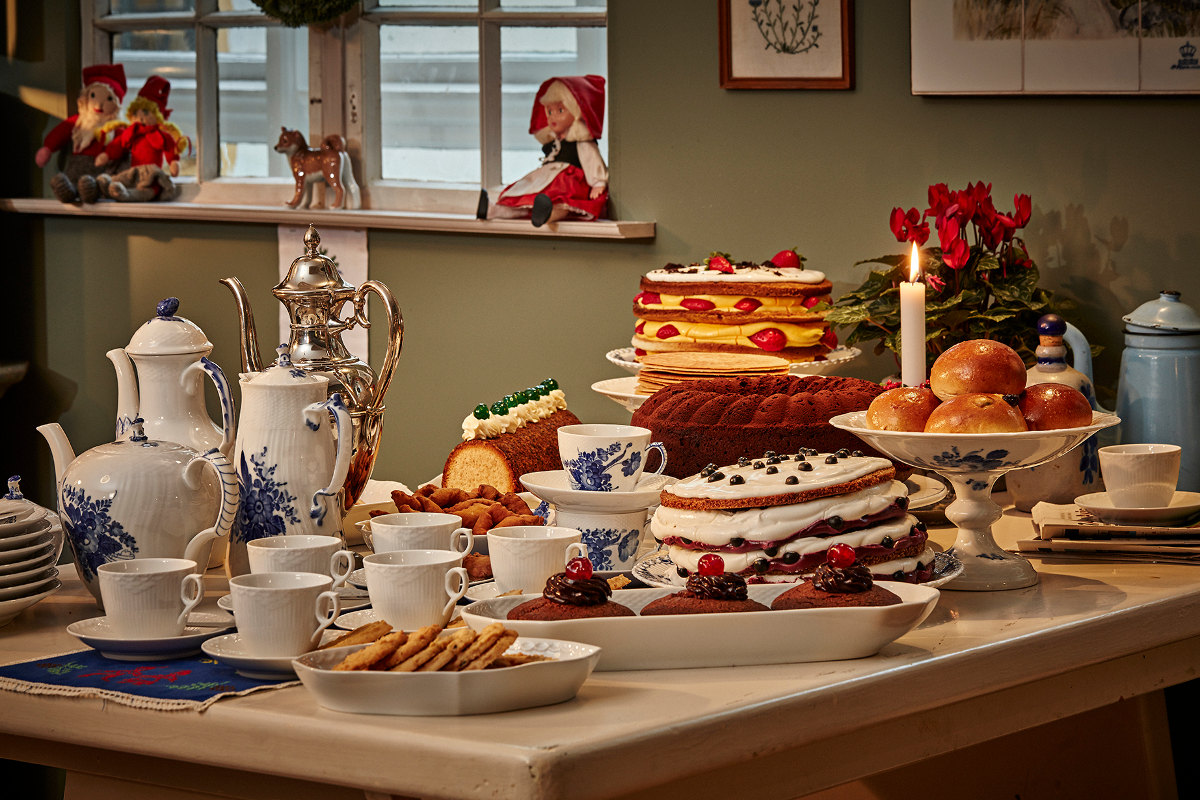 The table, set with RC White Fluted Half Lace and Blue Flower dishes, could not be more warm and traditional. If only there were recipes available for all these sweet goodies! 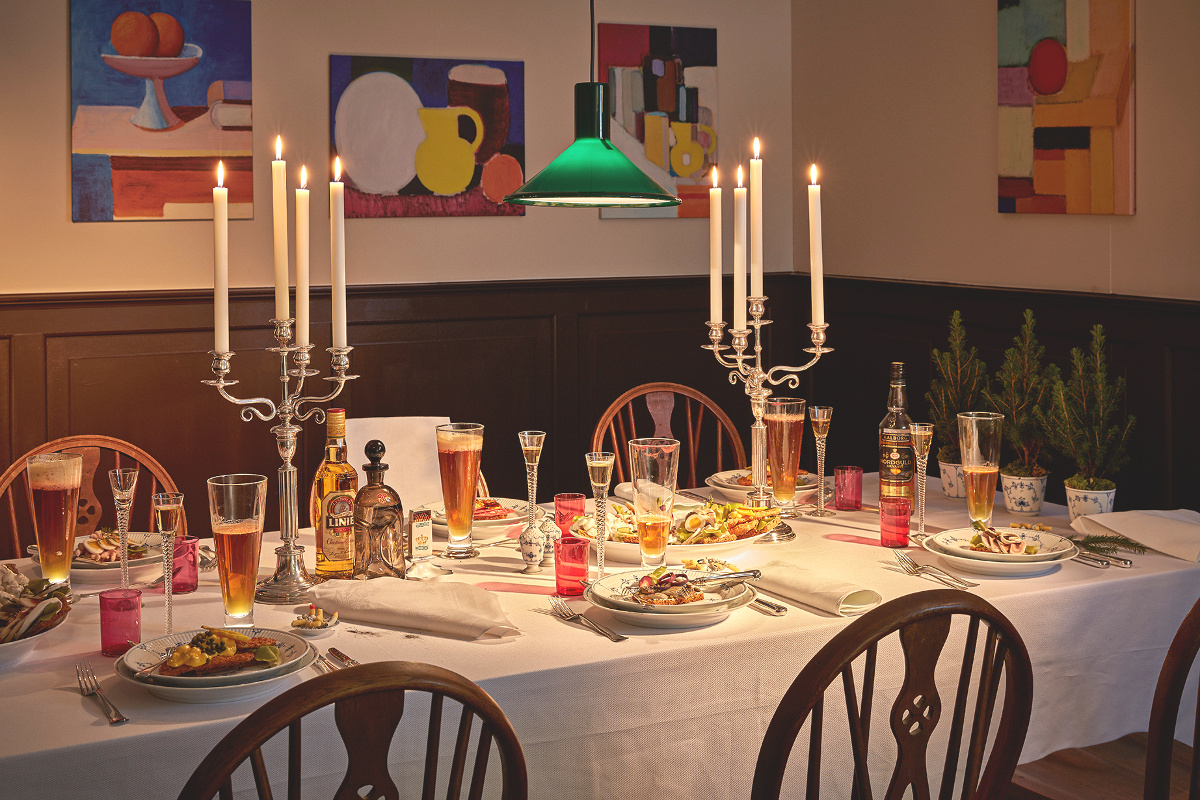 Danes love their beer and tall glasses filled with schnaps along with traditional open-face sandwiches. A Christmas table in a modern tavern, by Danish actor and singer Peter Frödin, pays hommage to that aesthetic with sandwich replicas rendered in marzipan. I also adore the very tall silver candelabra on this table as the candlelight adds a special conviviality. 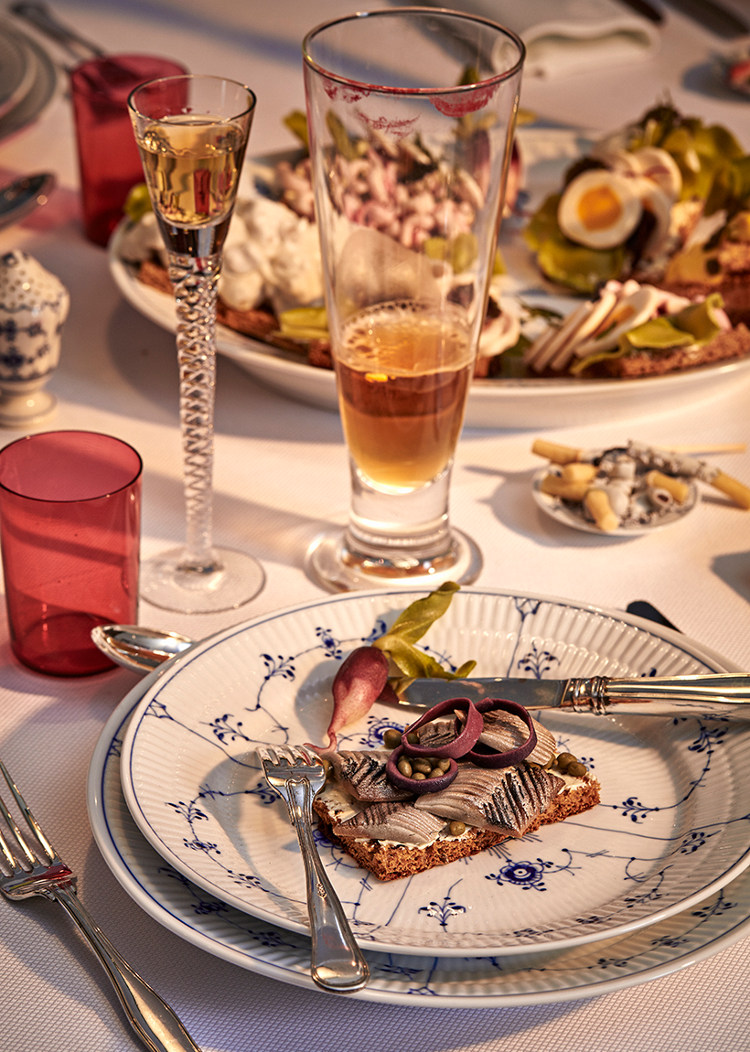 Along with classic white table cloths are the legacy Blue Fluted dinnerware settings — simple, elemental and thoroughly Danish. Back in the 1960s, when the Danish modern style was the height of chic, Blue Fluted was a top china pattern for brides. There’s a lady eating at this place setting — can you spot the telltale sign? 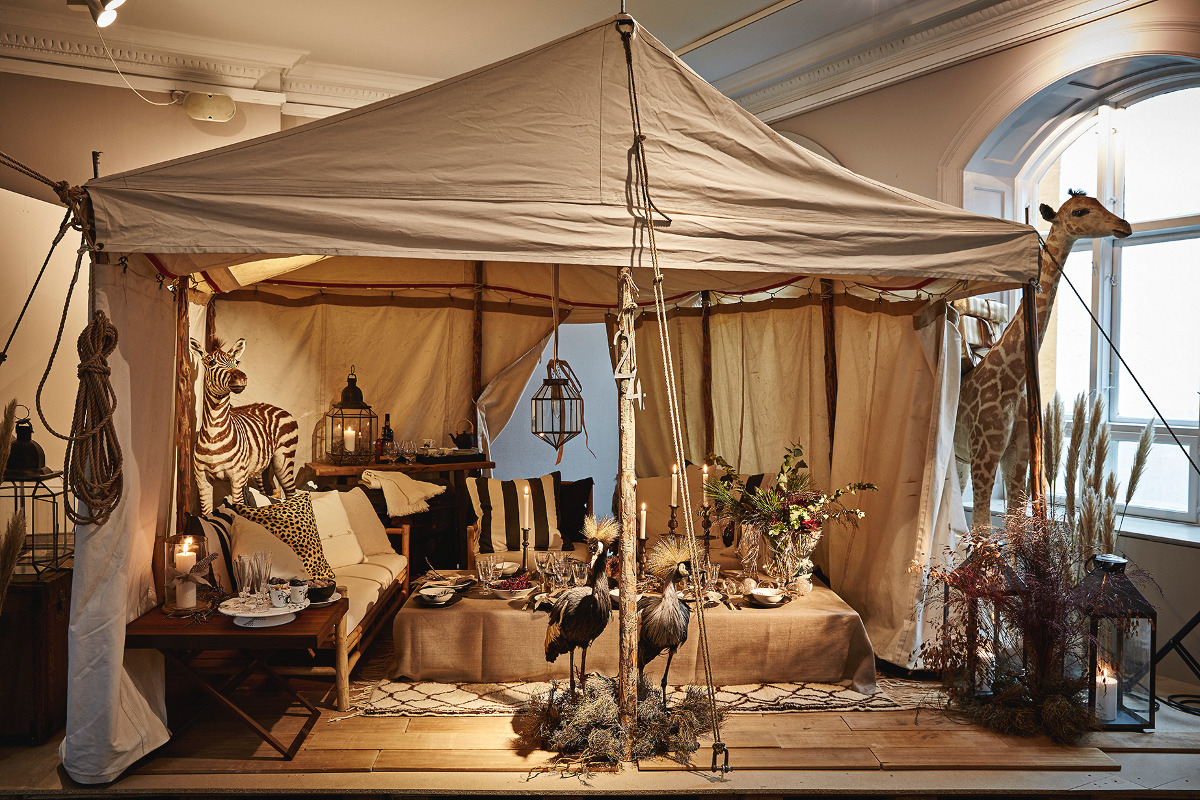 Danish comedian Kirsten Lehfeldt ’s quirky African safari Christmas table immediately brings to mind the famed Danish author Isak Dinesen (a.k.a. Baroness Karen von Blixen-Finecke) whose story of like in Kenya was dramatized by Meryl Steep in the 1985 film Out of Africa. So here we have a giraffe standing guard outside the tent. 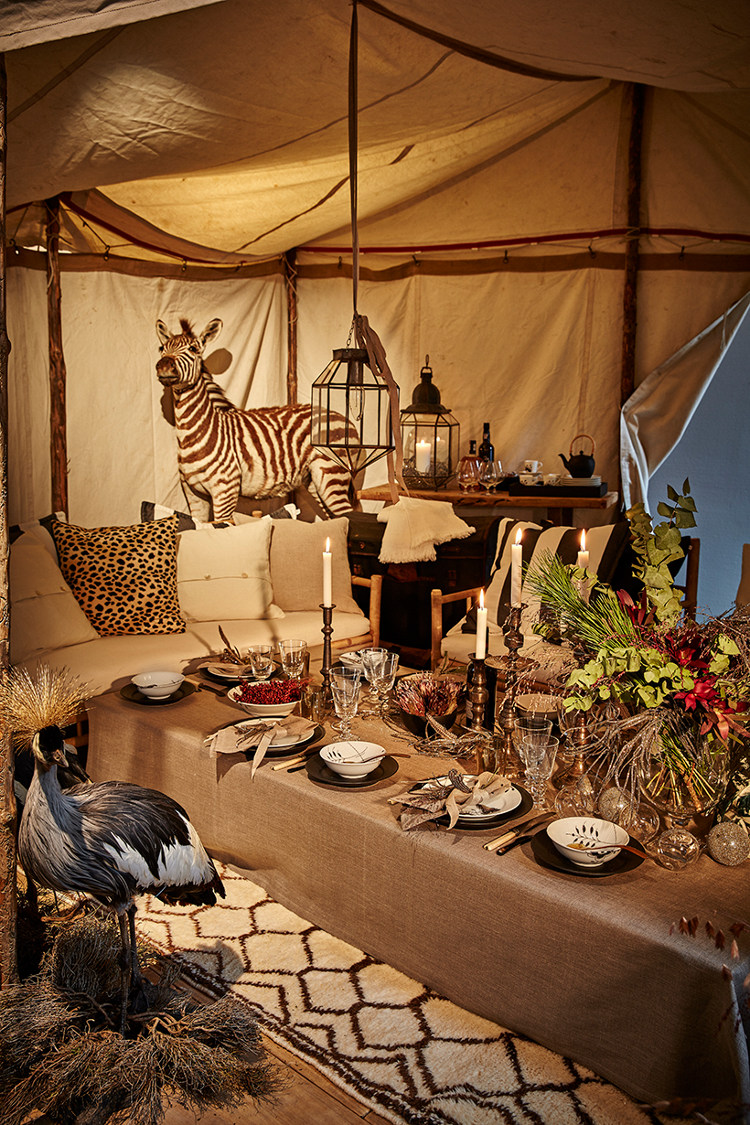 Inside, there’s a low table on a Berber rug set for a leisurely Christmas meal out in the wild. The animals have joined in. And this low table is so elaborate there’s a great deal of equipment to pack for safari! 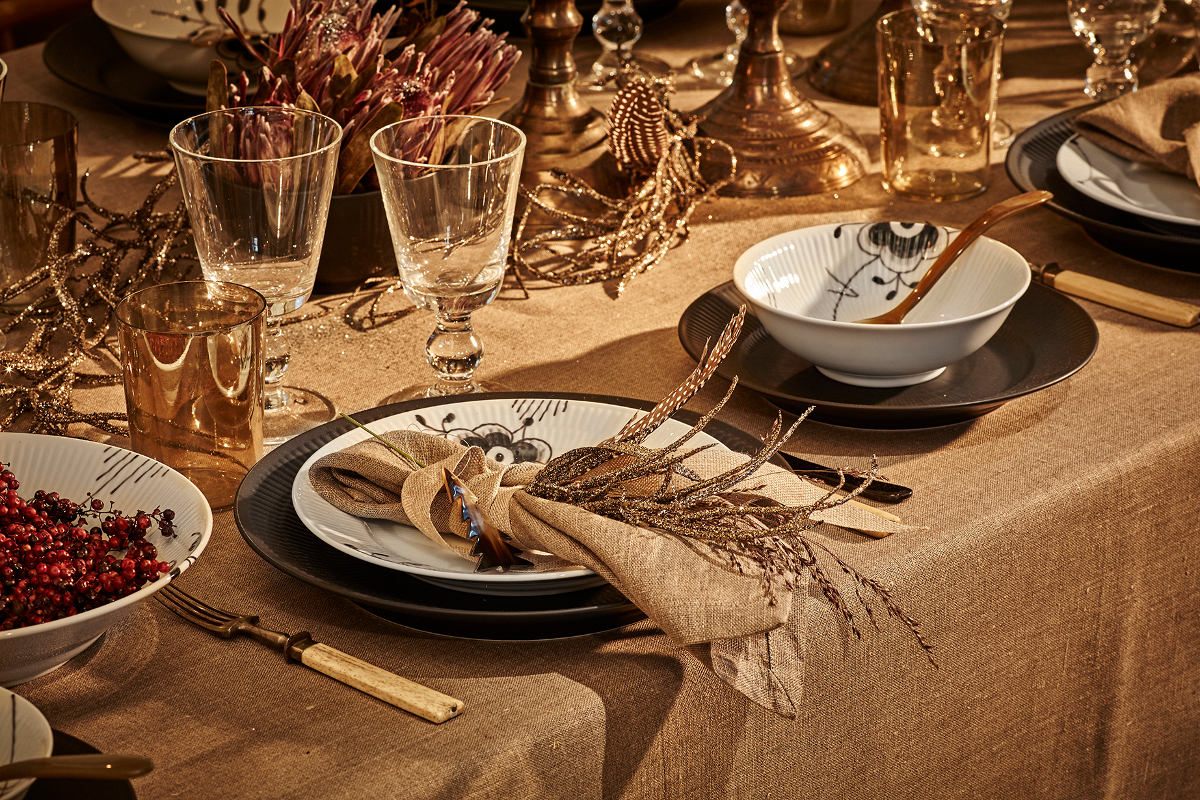 Black Fluted Mega and Black Fluted dishes pick up the high contrast theme dotted with animal prints and stripes. A rough linen tablecloth and napkins work well with the wilderness theme. While Christmas in Kenya is a long detour from Copenhagen, Ms. Lehfeldt’s table adds an exotic non-European touch along with a helping of romance, adventure and detailed decoration. 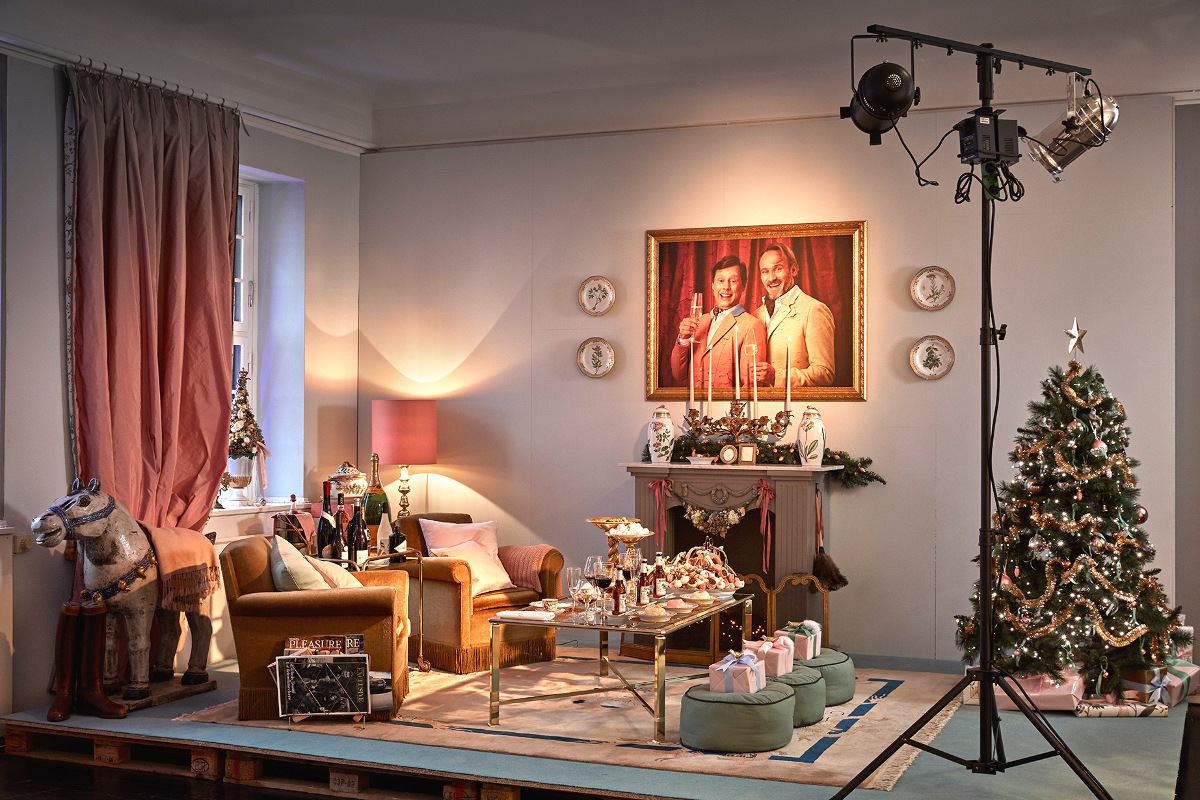 The snobs — Fritz and Poul — are fictional characters from The Cavalry, a Danish satirical series. Played by Martin Buch and Rasmus Botoft, the pretentious pair have done up their  staid living room for Christmas — complete with their portraits over the mantel. 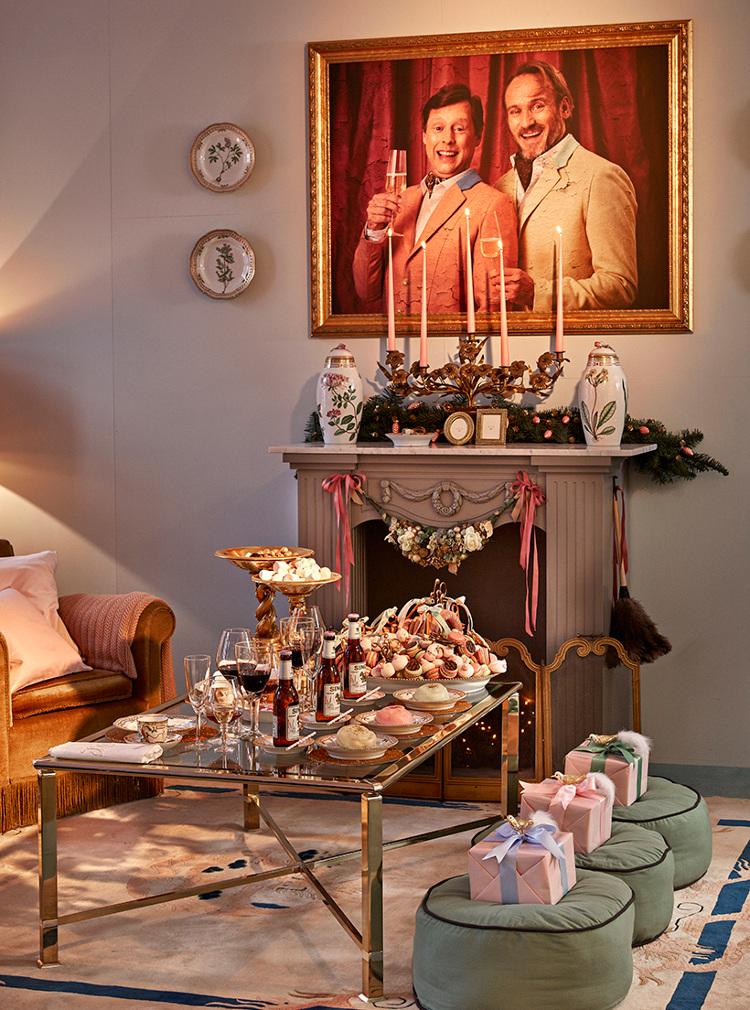 Given the nature of their characters it’s not hard to imagine why historic gilt-edged Flora Danica (now by special order) would be the choice of china here.They’ve loaded up the coffee table with the Flora Danica even adding a pair of vases to the mantel and plates on the wall. (You may recall that King FrederickV of Denmark commissioned the Flora Danica encyclopedia of botanical illustrations in 1761. By 1790, Flora Danica was the theme for a banquet service — the first production of this historic gilded dish ware.) 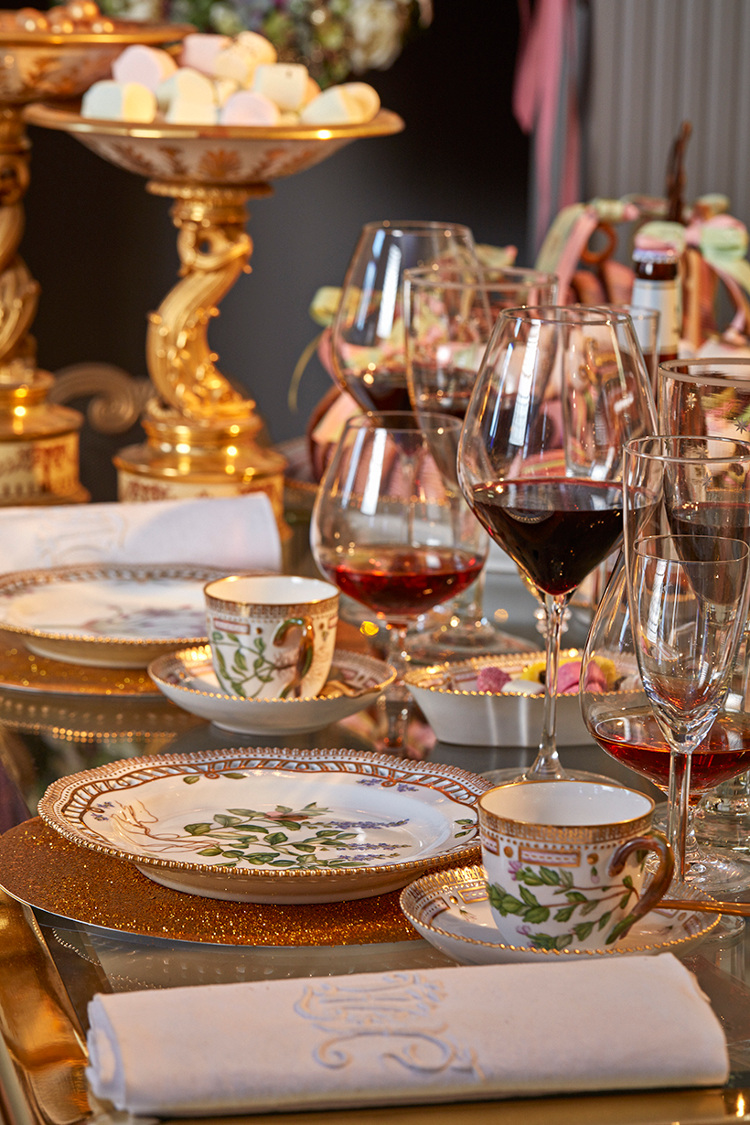 Meanwhile, the high living snobs have stocked the table with wine and liqueurs to go along with beer, pastry and gifts for a trio of expected guests. Note the monogrammed cloth napkins — another special touch.