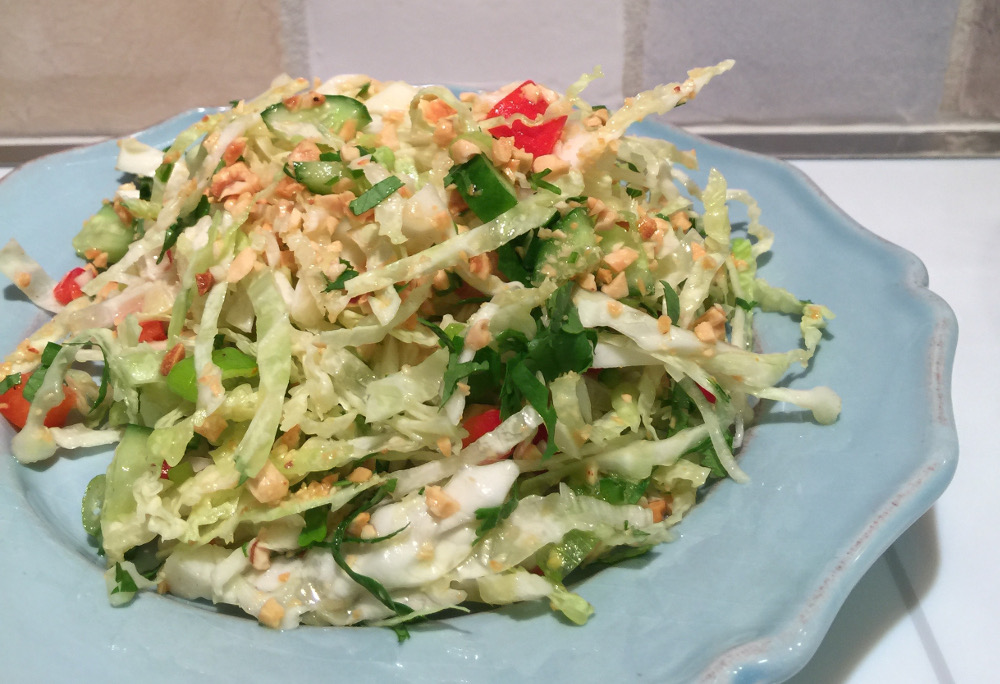 My favorite cole slaw is a glamorizer for cabbage plus a mix of spicy Thai flavors.

Inspired by picked vegetables garnishes served in Thai restaurants, it has hot green chile, chopped peanuts, and a curry-spiked rice-vinegar dressing. As a side dish it’s vegan but the slaw could also easily support cooked shrimp, or chicken — diced or shredded — you’ll see what I mean. After assembling the slaw, It needs a few hours for the flavors to blend and the cabbage to soften slightly. So it’s a natural to make ahead though I like to add the chopped peanuts at the last minute (don’t forget them). It’s a good keeper, too.

I chose Savory cabbage for this slaw because the crinkly leaves have great crunch. The dark outer Savoy leaves can be peeled back and used for stir-fries but I like the way it adds more color variation to the salad. Here’s how I handle it. 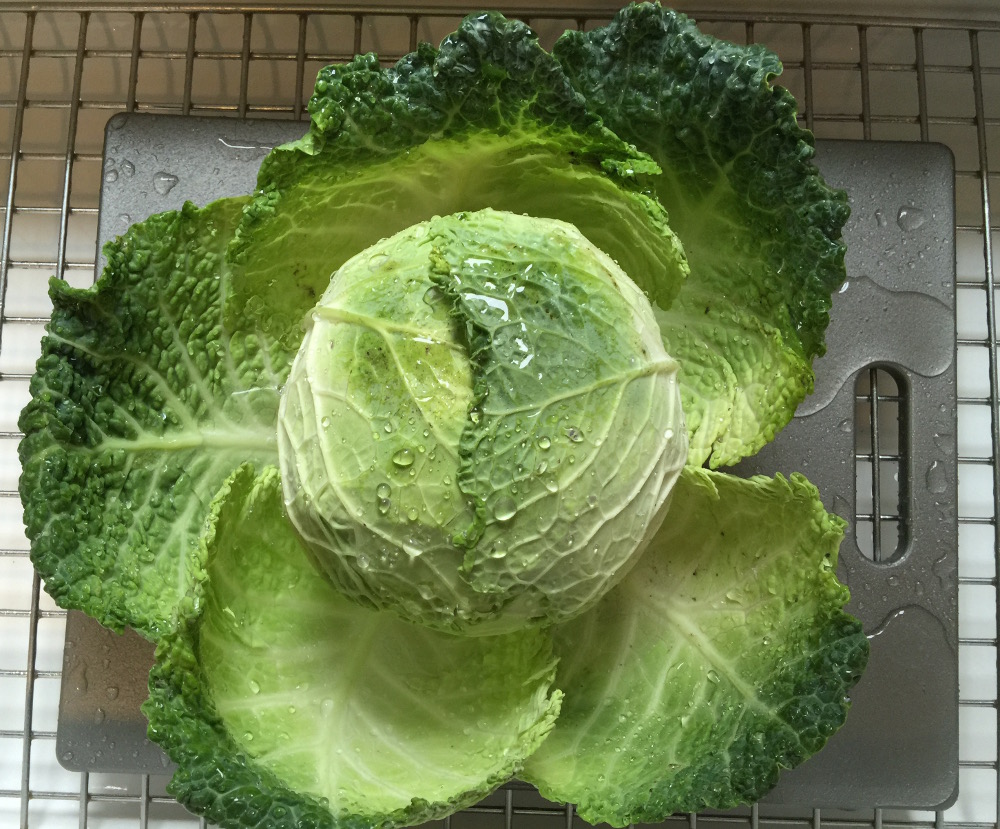 Peel back the tough outer leaves. 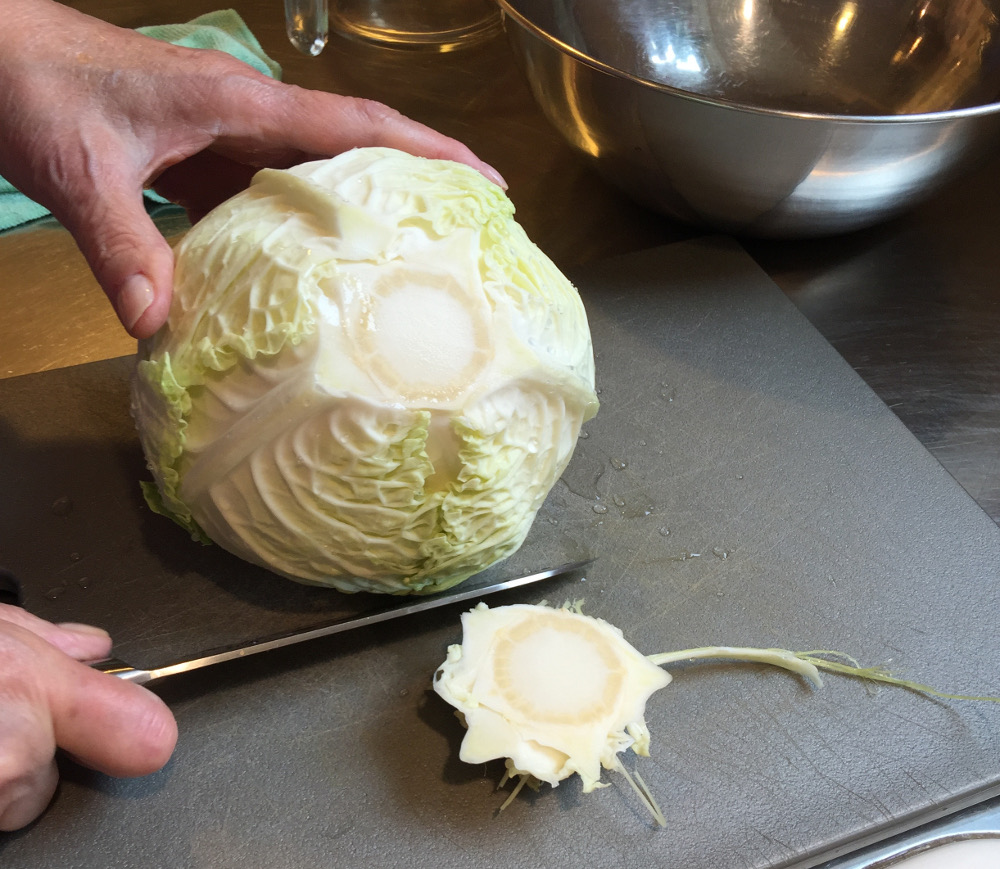 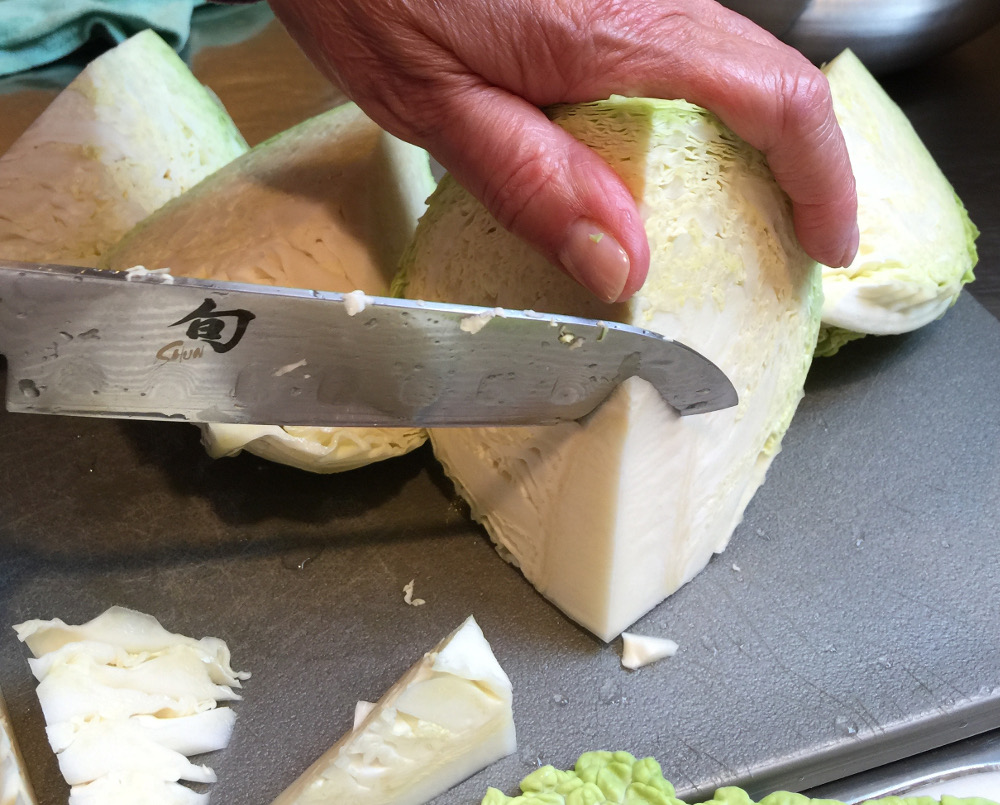 Quarter the cabbage, then remove the thick stem by cutting on a diagonal. 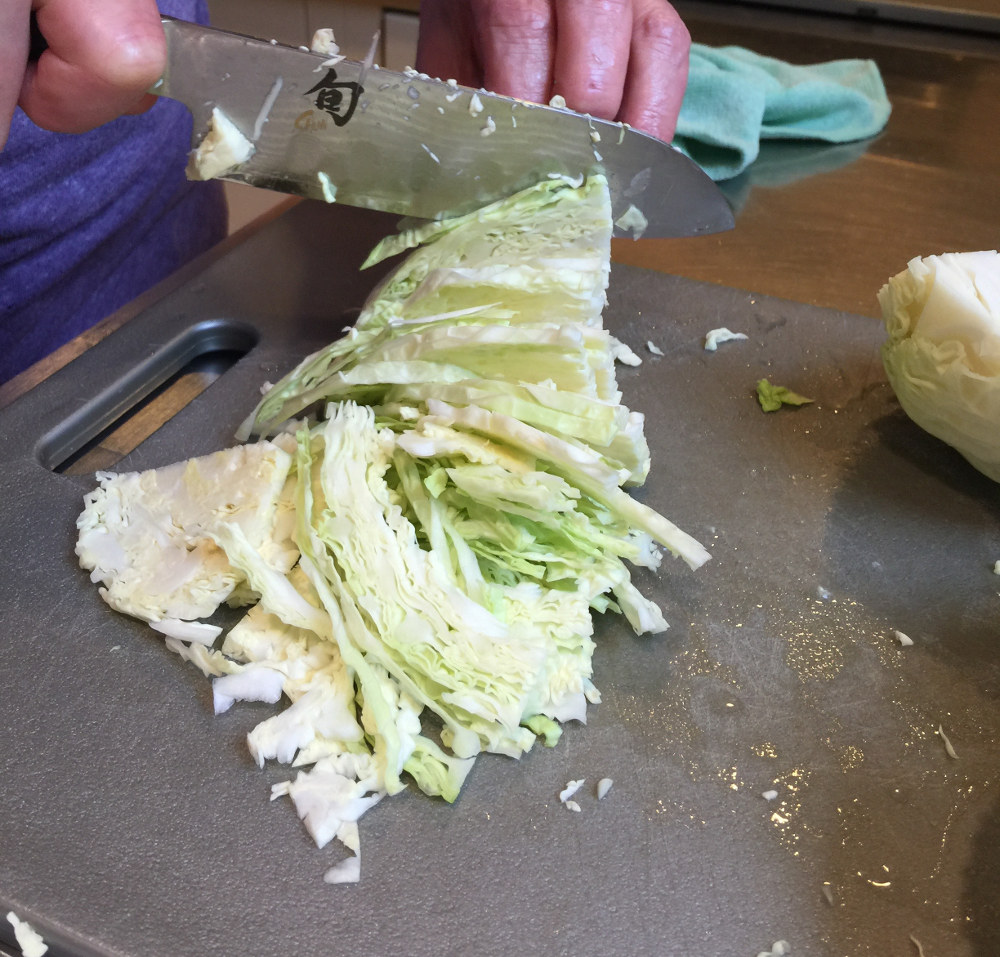 Shred the cabbage by slicing across the grain (the wedges also can be loaded into a food processor fitted with the slicing disk.

Unlike mayo-based slaws, this one is light and zippy and can be even zipper if you use serrano peppers rather than jalapenos, but either work well. I keep non-latex gloves in the kitchen for a variety of tasks, dealing with chiles included. 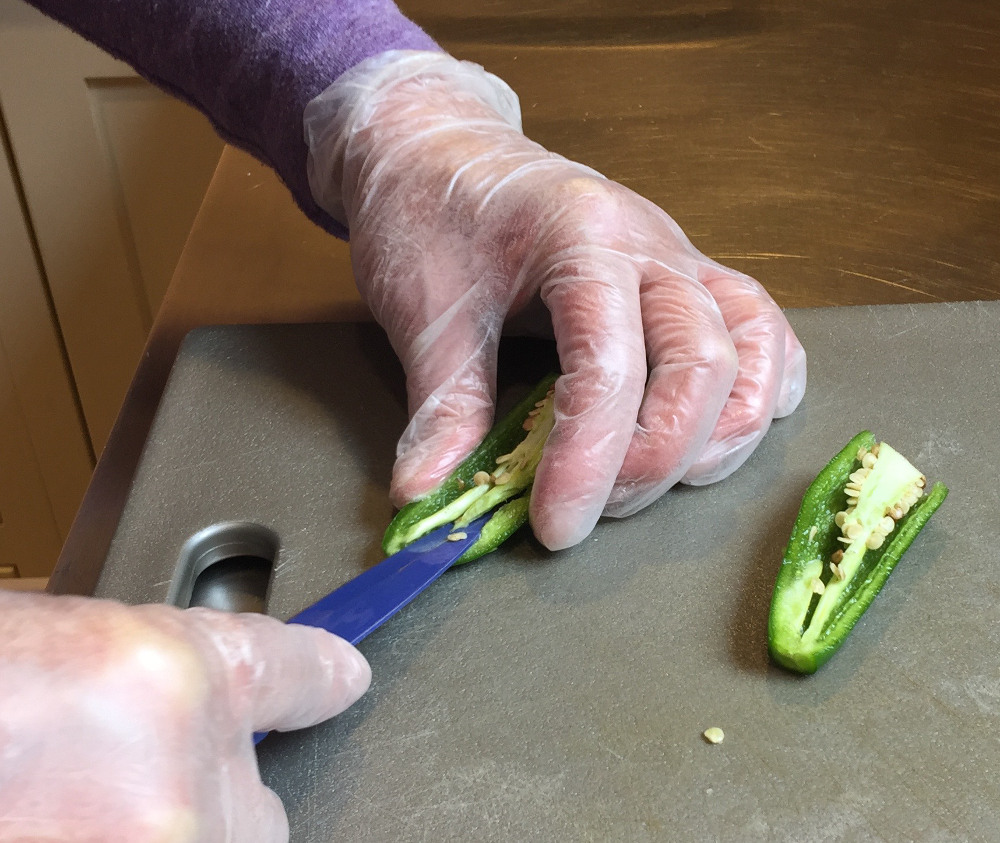 After I split them down the middle, I just cut the veins away quickly with the tip of a knife and then tap out the seeds. (Photos: Lisa Deyo) 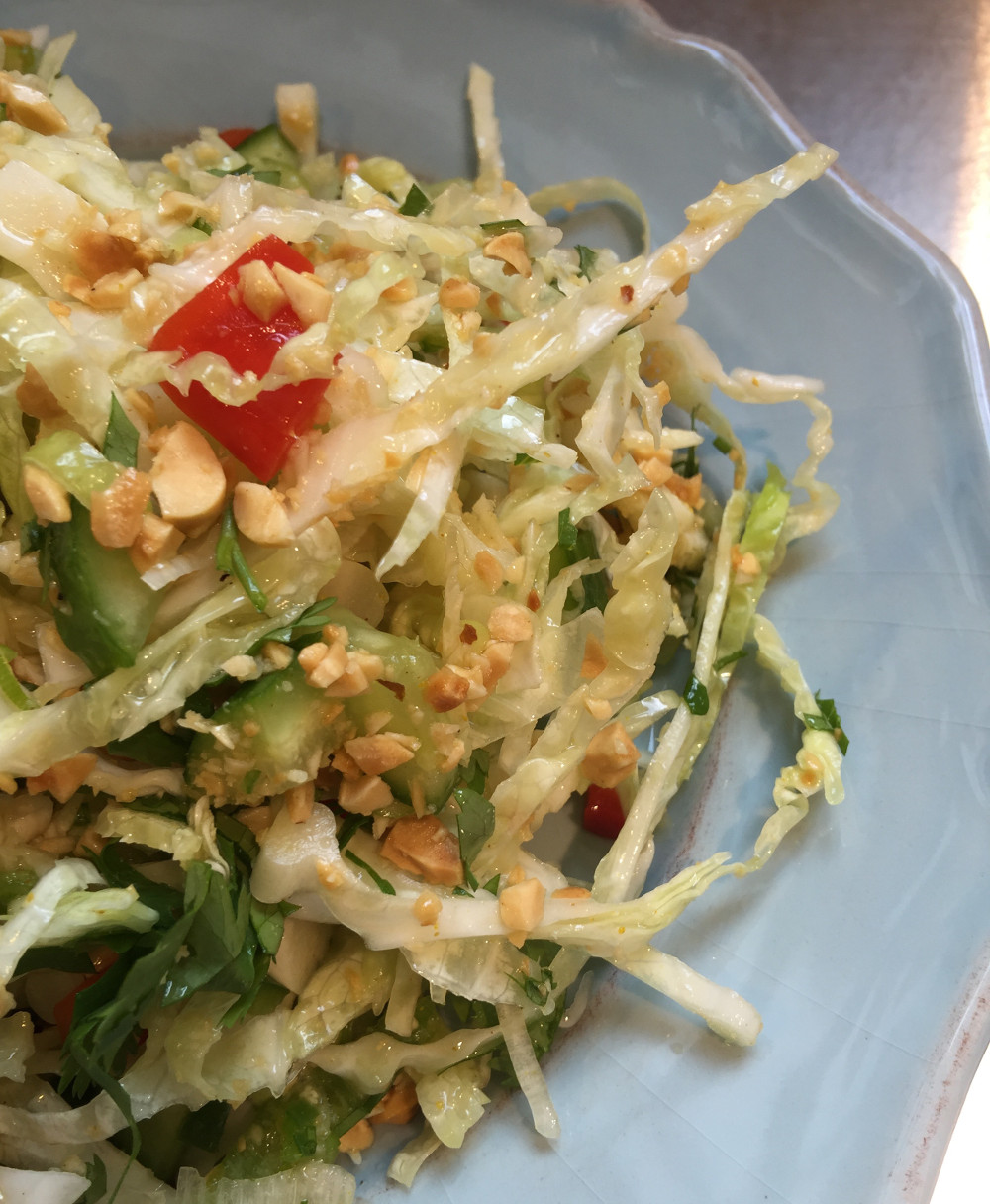 Savoy Cabbage - When I have the food processor out for the cabbage, I often run the cucumber and scallions through there as well.

Curry powder - My all purpose go-to curry powder is Madras brand, which has a good deal of salt. Not all curry powder blends have salt so more seasoning may be needed.

Chiles - If jalapeños or serrano peppers are large, use half.
Pre-Prep
Components can be cut ahead and bagged separately. I give the cabbage its own bag. I wrap the other ingredients separately but store them in the same bag so I don’t forget anything. The dressing gets its own jar and can be made several days ahead.
Switch Ups
Savoy cabbage - Garden variety green cabbage. Pre-shredded, bagged cabbage is convenient but I find it has less flavor than fresh cut Savoy.

Vegetable oil - Canola oil. This is the rare recipe where I would not use olive oil.