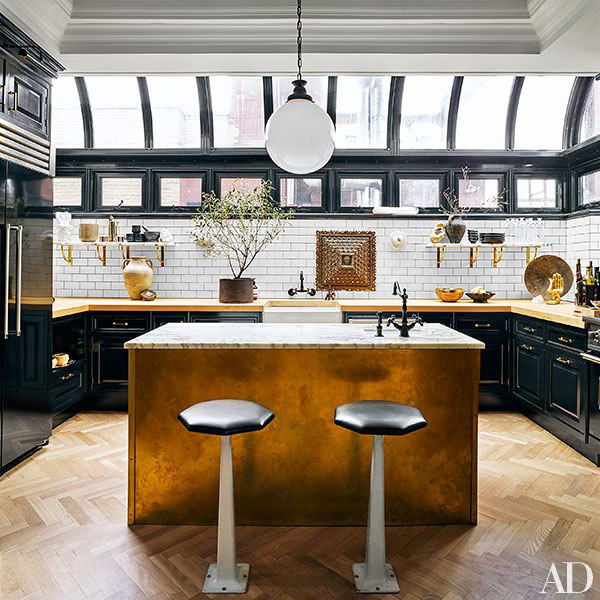 Celebrity designer Nate Berkus and his husband designer Jeremiah Brent have a stunning black and white greenhouse kitchen [top] in their newly renovated penthouse on Fifth Avenue, in Manhattan’s Greenwich Village. The showstopper feature is the 17-foot long curved glass greenhouse style roof that floods the kitchen with light and views in three directions.  Black lacquer cabinets are right on trend, as are the prominent brass accents on the island and on the sink wall. I’m focusing on the kitchen here but the entire 3-bedroom duplex is featured on the next cover of Architectural Digest.

Meanwhile, I discovered a little secret about this kitchen: The renovation was mostly cosmetic. Both Berkus and Brent are designers and very savvy. (You may remember the talented Jeremiah from the Rachel Zoe series — he’ scheduled to host Home Made Simple on the OWN network in November). Working with self-proclaimed “contractor to the [design] stars” Steven Fanuka, they transformed a tired looking kitchen, with dowdy brown cabinets and dark dated granite, into a glamorous up-to-date beauty.  So here’s what you won’t see in AD: “before” photos of the kitchen from the real estate listing. The couple purchased the penthouse in 2013. 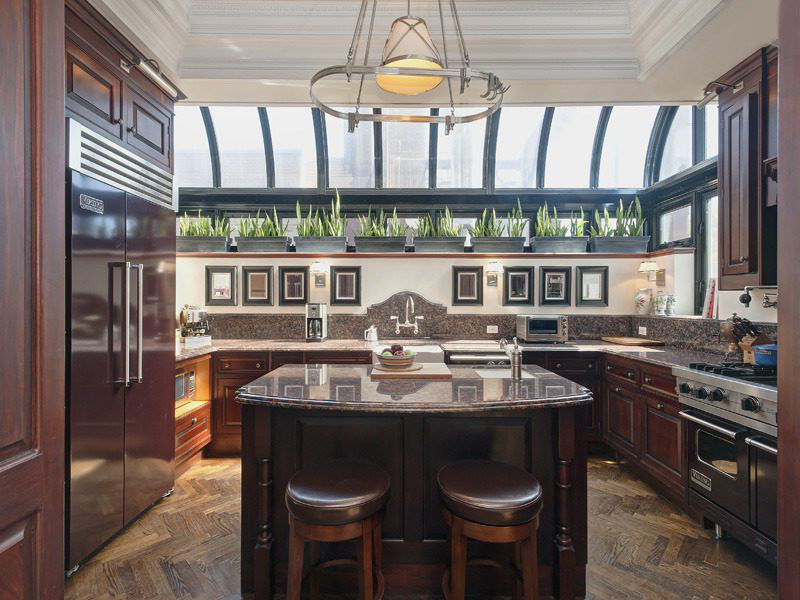 Here’s how the kitchen looked before Berkus & Brent went to work.

The stunning greenhouse roof was existing. But it was dragged down by the nondescript, dark chestnut brown cabinets. Equally dark brown-and-black granite was used on the counters and for a backsplash that looked like a refugee from an Italian villa.  A black SubZero and a black Viking range were existing in the kitchen. The designers wisely kept the white farm sink and a small prep sink in the island. Pilasters on the island (clearer on a photo below) faced into the dining room — an ugly furniture look topped by an equally unappealing curved counter. Above the island, the previous owner installed a combination pot rack and pendant light that was too high, too small and too lightweight.

By far the most noticeable change made by Berkus & Brent is the white subway tile backsplash, with gray grout. Subways replaced all the dark stone and created a cool, calm, brightness in the kitchen. The new backsplash also helped showcase the greenhouse roof. A white marble shelf on each side of the main sink rests on antique decorative brass brackets. All the kitchen faucets were changed from chrome to what looks like Kohler’s black finish.

The second big change was repainting all the cabinets a high gloss black to blend with the appliances rather than trying to use them for an accent. 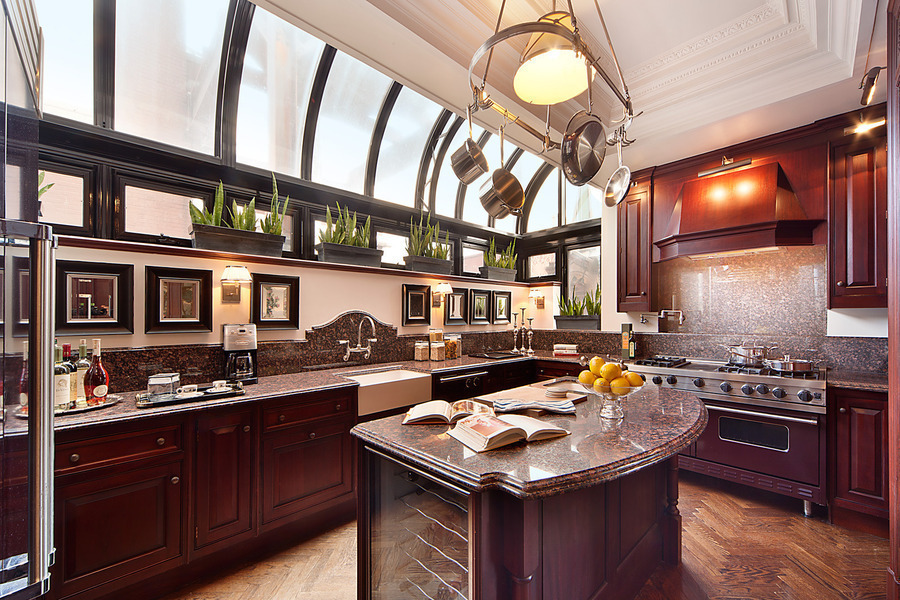 The third major change was slicing the frumpy pilasters and panel off  the island and refinishing the side that faces the dining room with a sheet of unlacquered brass. Cabinets on the island were replaced or painted white. A bright slab of Breccia Imperiale from Artistic Tile replaced the homely curved granite counter. The white marble reflects light into the center of the 11-1/2 foot wide kitchen rather than absorbing it and suits the tile. A pair of slim industrial stools, bolted to the floor, add seating. 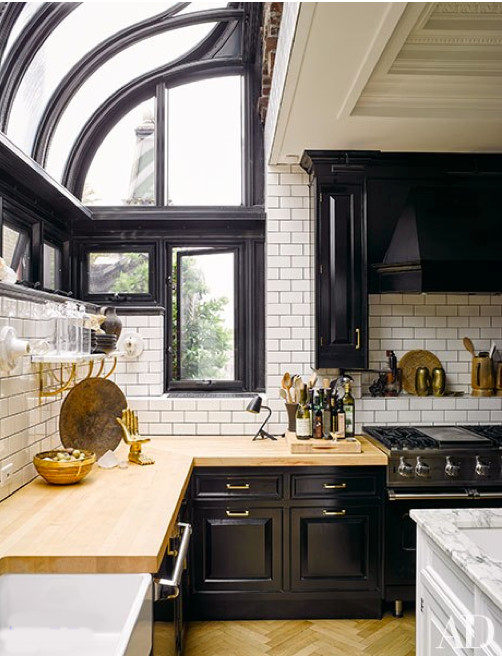 Additionally, granite counters on the perimeter of the kitchen were changed to butcher block. That adds a wood element to coordinate with the existing herringbone oak parquet floor.

When I first saw the kitchen I assumed that greenhouse roof was new. But that, too, was existing as the “before” photos showed. The greenhouse had been created by enclosing one section of a terrace that wraps around the entire 15th floor apartment. A glimpse of the exterior brick can be seen in a side view of the new kitchen. And don’t overlook the gorgeous pre-WWII tray ceiling with elegant plaster moldings. That is now pointed up by a black and white globe pendant that matches the kitchen’s new classic style.

What’s also very cool is that the kitchen has it’s own private section of terrace accessed from a door near to the refrigerator. With views in two directions it must be an outstanding space. 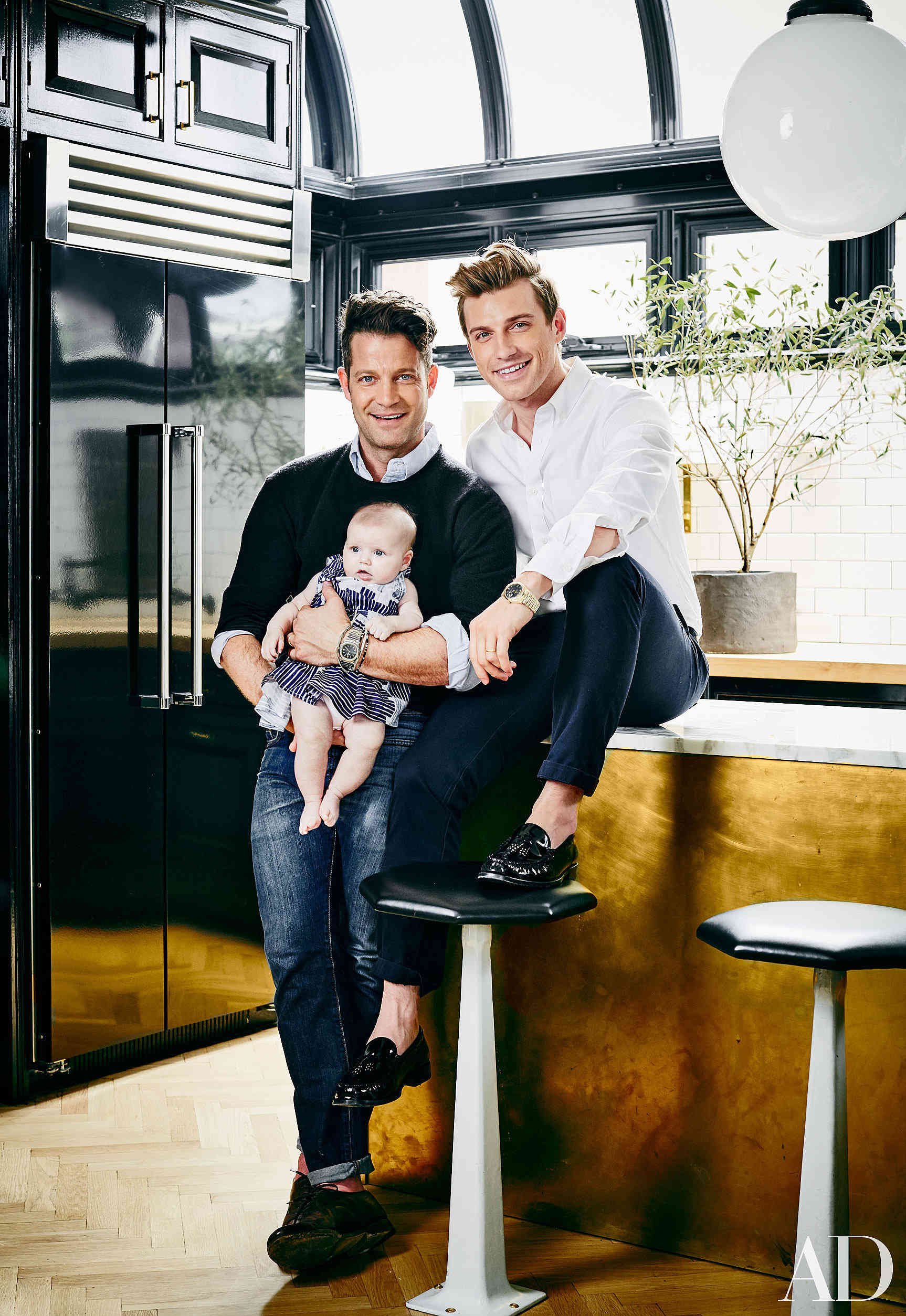 Details aside, this spacious kitchen needs to function for a young family now that there’s a new addition — 6-month old baby Poppy, who arrived in March. Poppy is also making her debut in the kitchen which is as handsome as she is adorable.

Other kitchens with greenhouse features are included in Conservatory Kitchens, in the Curved Oak Kitchen, and the Gothic Revival Kitchen.