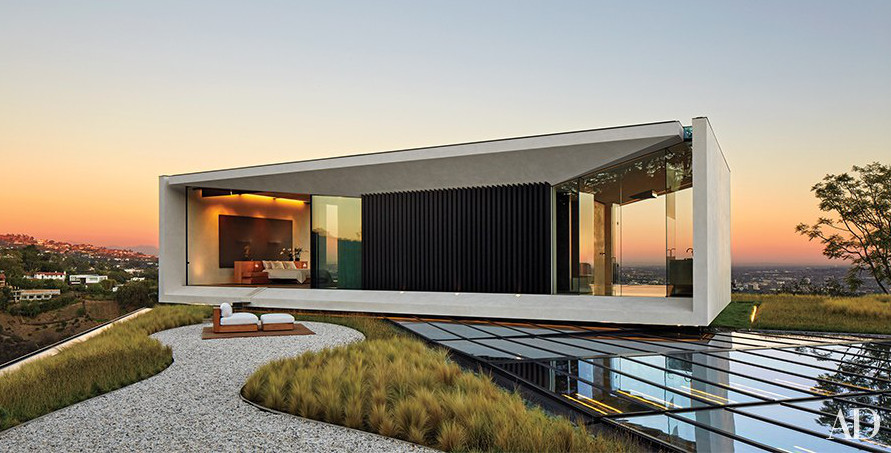 When someone builds a three-story, 30,000 square foot house (yes, 30K) on an eight acre lot overlooking Los Angeles, the result is designed for maximum effect. That’s the kind of space usually found in castles and châteaux though the exclusive Bel Air neighborhood is famed for its expansive private estates. The owner of the house, film director Michael Bay, is a hit movie maker whose credits include Armageddon and the Transformers. So it’s not unreasonable to expect a big budget house with a unique design, panoramic views, and 100% Hollywood features like a screening room and luxury prop museum/garage.

L.A. always had its mansions — some famous; some infamous. Bay’s minimalist mansion has surely been added to that list. Yet it’s the minimalism that gives this house special character, and what draws me to this house again and again. I’ve looked it it online and in magazines and I find myself liking the extreme simplicity more each time.  The rooms are huge yet there isn’t a lot of stuff. Some of the furniture is top-quality vintage mixed with new pieces but it’s all low and clean. Walls are open to the outdoors in a way possible only in a climate like that of Southern California. What I like most, though, is the transparency of Philip Johnson’s Glass House but on a far grander scale.

The master bedroom [top & below] occupies the upper level, giving it unobstructed views and exclusive access to outdoor space that includes a manicured green roof deck adjacent to the skylight over the home’s entry below. It’s a see-through bedroom suite with a different city view on each side of the bed. 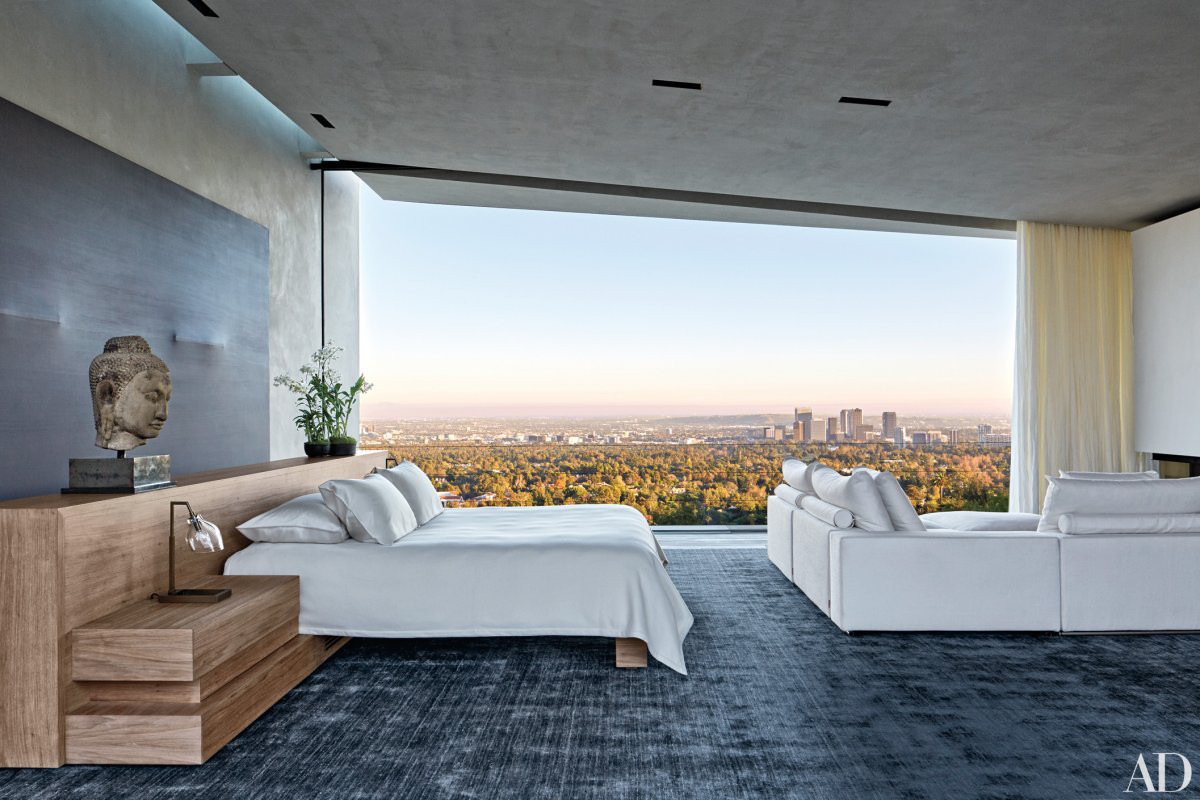 Motorized curtains, installed in a ceiling track, provide light control for the bedroom’s massive glass walls. The custom custom platform bed backs up against an interior concrete surface that’s repeated by the ceiling. The only other furniture is the white sectional Flexform sofa. Apart from a Thai Buddha head and a pair of Alison Berger bedside lamps, the room is accessory and clutter free. 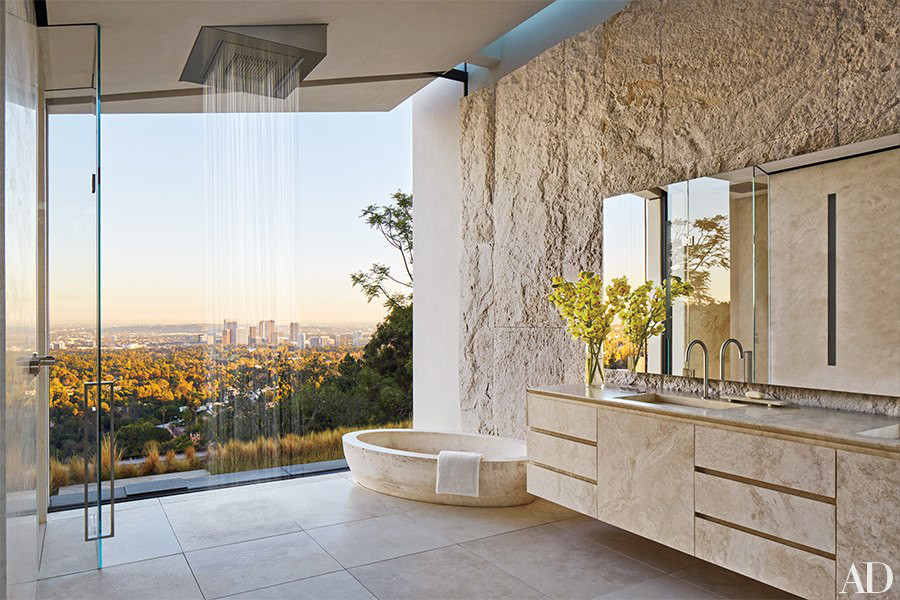 That’s creamy Italian travertine in the master bath — rough-hewn on the walls to play up the natural texture and honed on the floor tile and vanity. A low oval travertine tub looks like a wading pool in a bath of this scale but it’s just steps away from the overhead Dornbracht rain shower. Mirrors above the vanity reflect both the walls and the east-facing view of Beverly Hills. 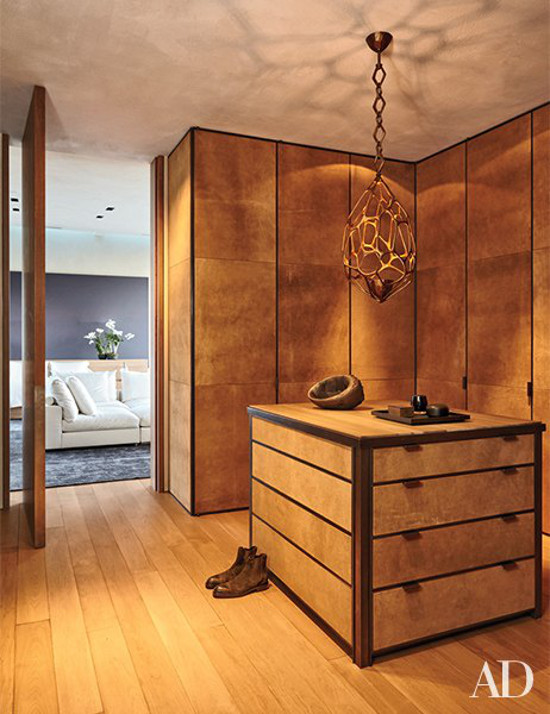 You can catch a glimpse of the bedroom sofa from Bay’s wood-paneled dressing room. Closet doors are done in matching wood veneer with discreet black outlines. In this view, from inside, the door is open. When the dressing room is closed off the floor-to-ceiling door swivels into place so it looks like part of the paneling. In minimalist houses, everything is tucked away behind closed doors. In that way, this dressing room is so restrained the ’70s style Herve Van der Straeten limited edition pendant light looks a little gaudy though it has a kind of masculine, beefy quality. The dressing room eliminates the need for anything but beside storage in the bedroom. 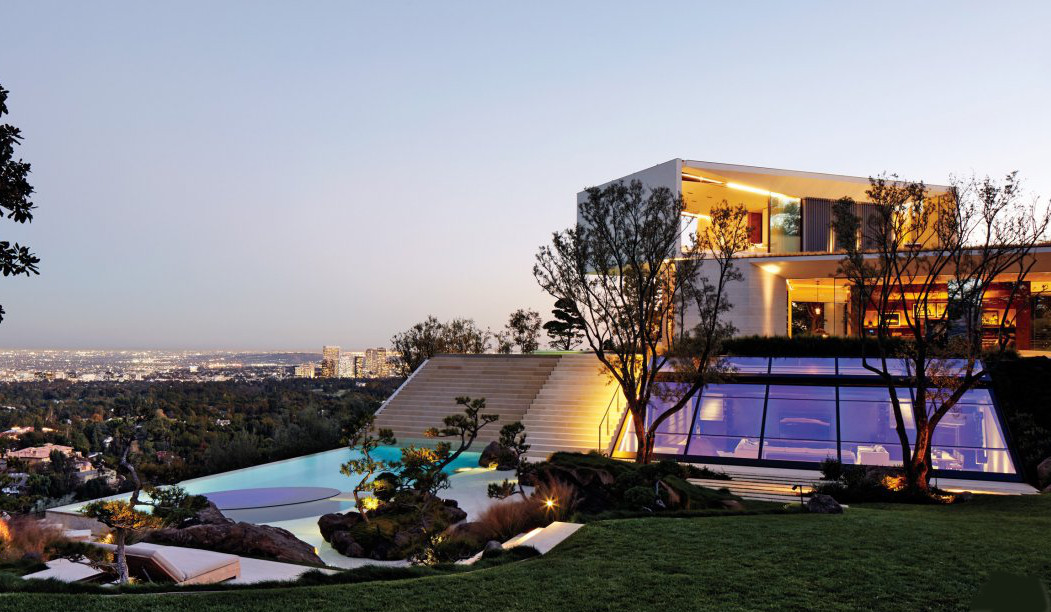 An exterior view of the house, overlooking the pool, shows how each of the three levels relate. The original design by Miami architect Chad Oppenheim was executed by Rios Clementi Hale Studios in L.A. Previously, the property belonged to steel distribution magnate Earle Jorgenson, a member of President Reagan’s kitchen cabinet and close personal friend. Mr. Jorgenson died in 1999 and his 1951 mid-century modern house, puchased by Mr. Bay in 2009 for $10.9 million, was torn down to make way for the new structure. Bay has been quoted as saying he wanted the house to have the “feel of a resort.” 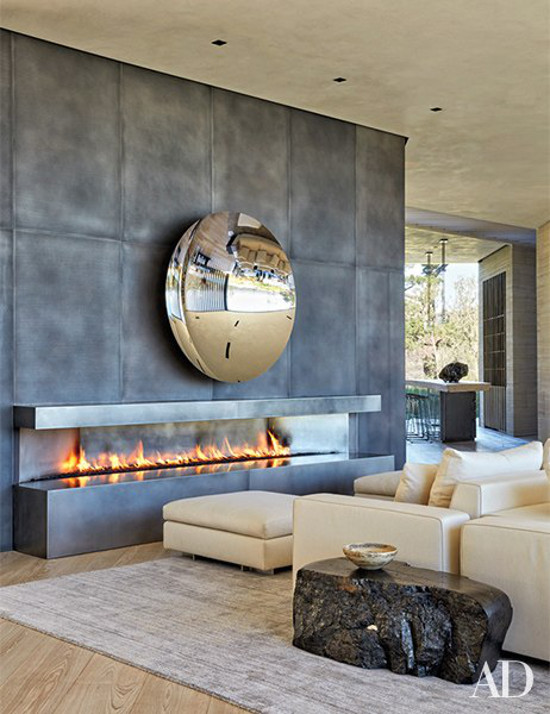 In that sense, Bau has succeeded. The living room has the scale of a hotel lobby with a pair of Molteni & C sofas back to back. One faces the long gas fireplace inset in a steel-paneled wall. What appears to be a large circular mirror over the fireplace actually is a mirrored Anish Kapoor sculpture — a slightly ironic two-in one choice.

The hard surfaces and neutral colors are offset by accessories like natural wood tables and monochrome area rugs. This one, and others throughout the house are from Mansour Modern, a high end L.A. dealer. This and others appear to be from Mansour’s Sand collection — my guess based on a quick look. 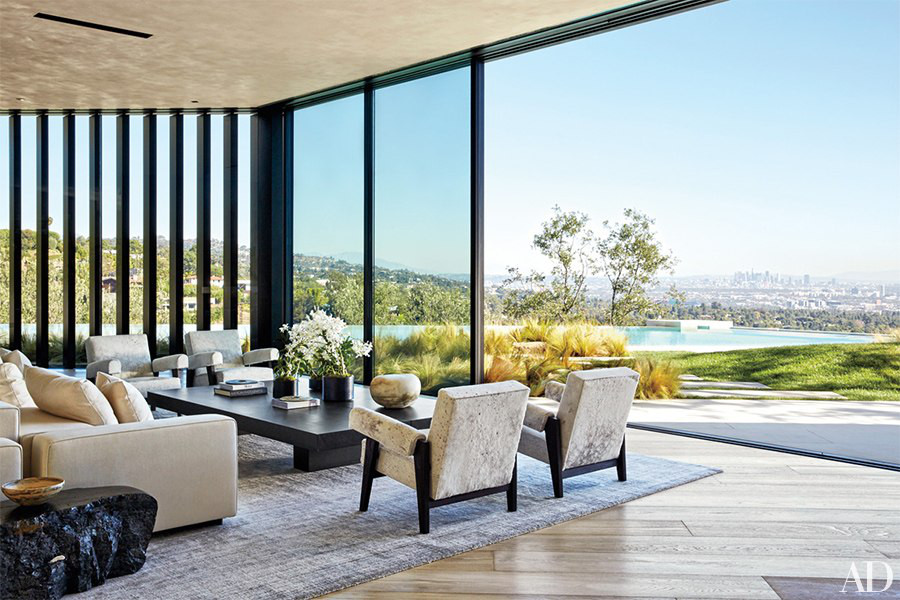 The companion sofa faces the deck leading out to the pool. A pair of vintage Le Corbusier and Pierre Jenneret armchairs float on each end of the coffee table. 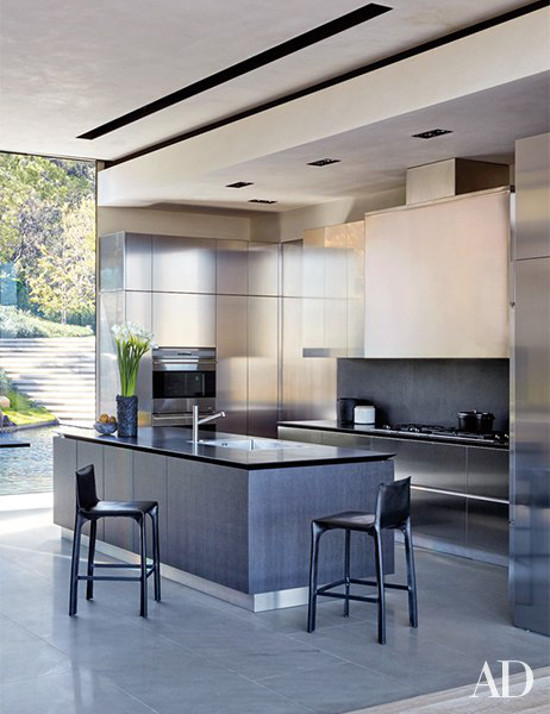 This is not Bay’s primary residence. It’s a second home designed for short stays and business entertaining. With those givens, the Boffi kitchen seems almost compact though it’s difficult to see whether there is a service kitchen geared to caterers behind the section that’s open to the living space.

The double oven and cooktop are wolf and stools flanking the island come from Matteograssi.

It would make sense in a house of this size, to have additional service or summer kitchens on other levels, particular on the lower lever where access from the guest room or home theater might be needed. 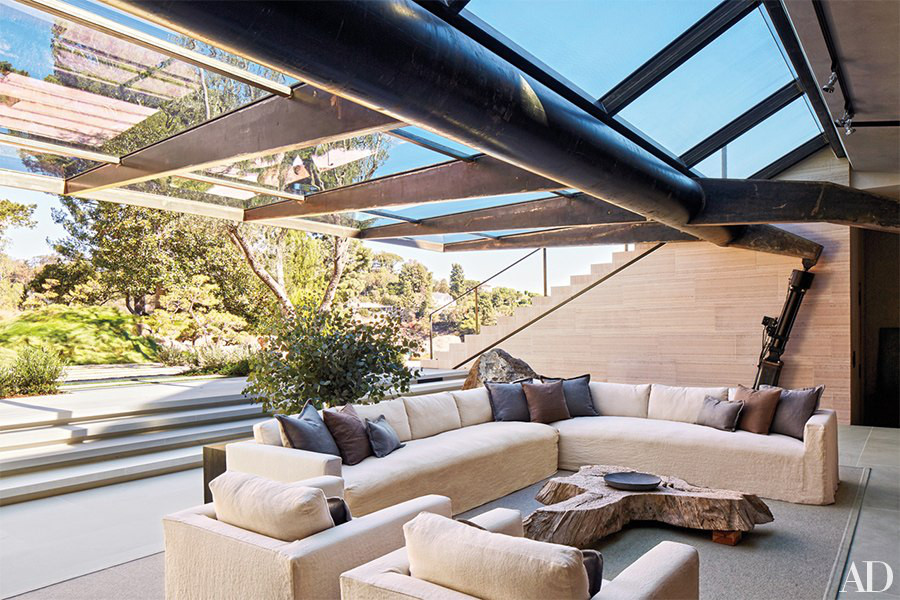 In good weather, a hydraulic glass wall can be raised to transform the lower-level lounge into an indoor-outdoor room. Slip-covered sectionals  by James Perse, and the organic wood table from Axel Vervoordt, keep things very casual here. 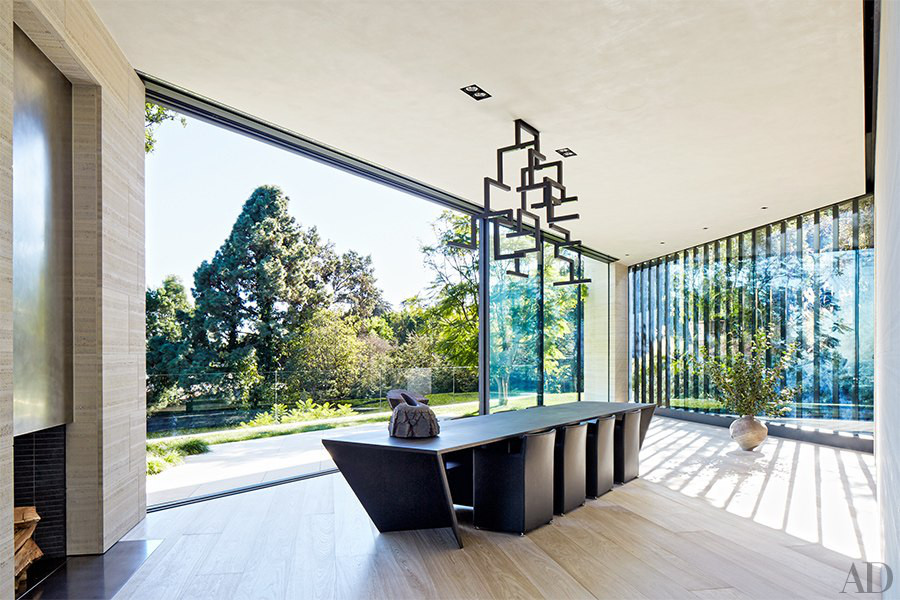 This dining room and a library, also on the main level, are similarly furnished big rooms with a large table and chairs floating in the center. Both are tastefully done by interior designer Lorraine Letendre but, for me, look a bit impersonal. On the other hand, the city lights must be astonishingly beautiful at night. The dining room also boasts a fireplace and, it’s interesting to note, the wide-plank flooring is run on the diagonal which leads the eye naturally to the windows. 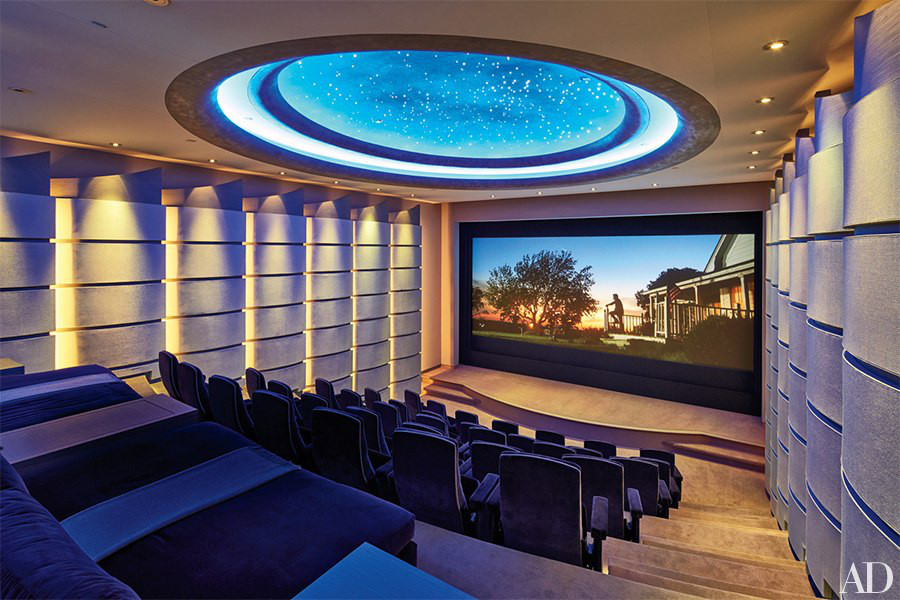 In Hollywood homes it’s not unusual to have a screening room. Bay’s is on the lower level and it’s large, with more than 35 seats. Decorator Lynda Murray gave it the plush treatment with midnight blue upholstery and a special sound system — Bay’s films are known for special effects and spectacle. I think this “home” theater is a bit of a hoot with its little stage.  And the stars always come out at night here, at least in the ceiling dome filled with LED lights. And the Oscar goes to…the house!

See even more of this house.