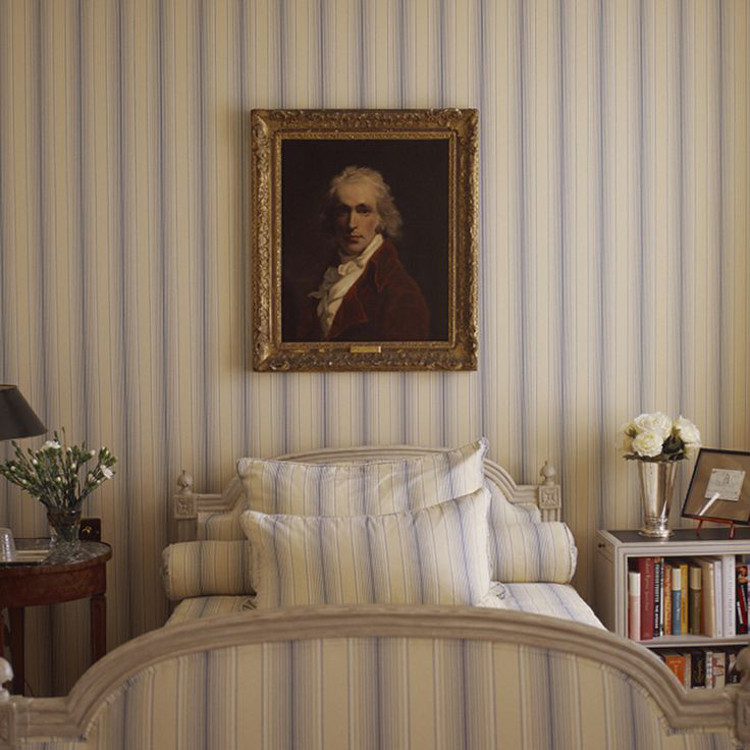 French-style single pattern rooms use one fabric to cover the walls, furniture and draperies.

Back in the early days of domestic interior design the fashion was for everything to match.  Single pattern rooms had a very intense look. Today, rooms decorated in this style are viewed as hyper traditional — even archival. Fabric-covered walls can be wildly expensive when the required yardage is added up and the look isn’t a DIY favorite. That’s no surprise since upholstering walls perfectly — so the pattern isn’t thrown off — takes special skills.

The iconic fabrics for this single pattern rooms are mattress ticking stripes and checks. And designers with the capability of Mlinaric, Henry and Zervudachi can do them to perfection. In the bedroom of a  London house, a conservative blue-gray and cream stripe is exquisitely tailored to a Louis framed bed. Note how perfectly the stripes line up from the walls through to the spread, the French roll, pillow shams and down to the footboard — with an ancestor portrait looks down on the ensemble approvingly. 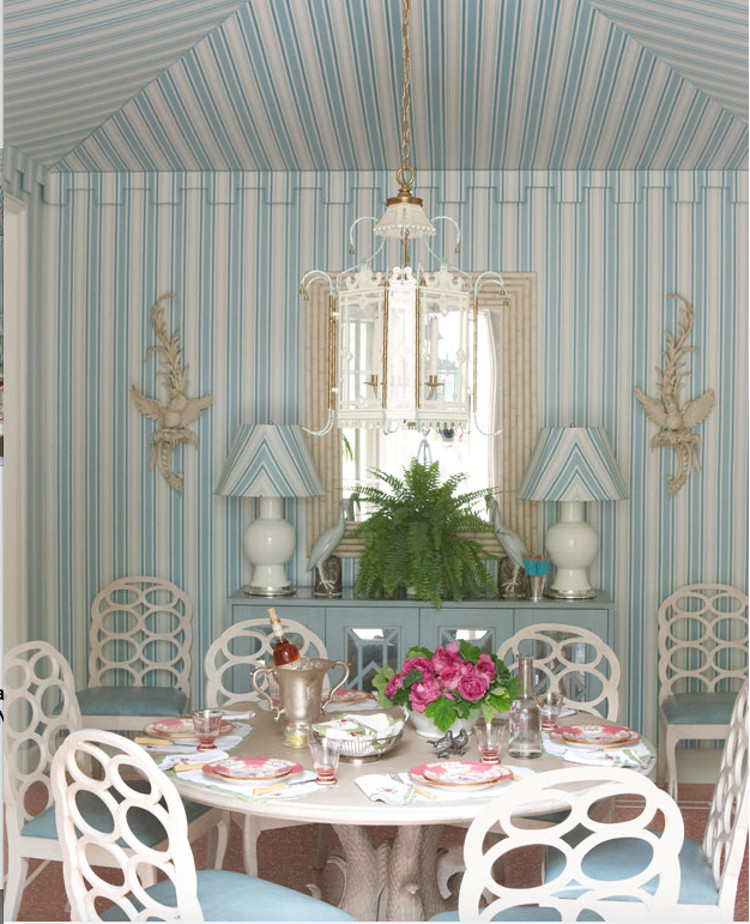 The Napoleonic wars brought tent rooms into fashion. And how typical for the ingenious New York designer Miles Redd to pull the campaign look into the 20th century by using iconic Dorothy Draper chairs around the dining table table. A lantern chandelier and sideboard set with fabric-matched table lamps ramp up the campaign look and make it fun. What a perfect room for a summer brunch or lunch. 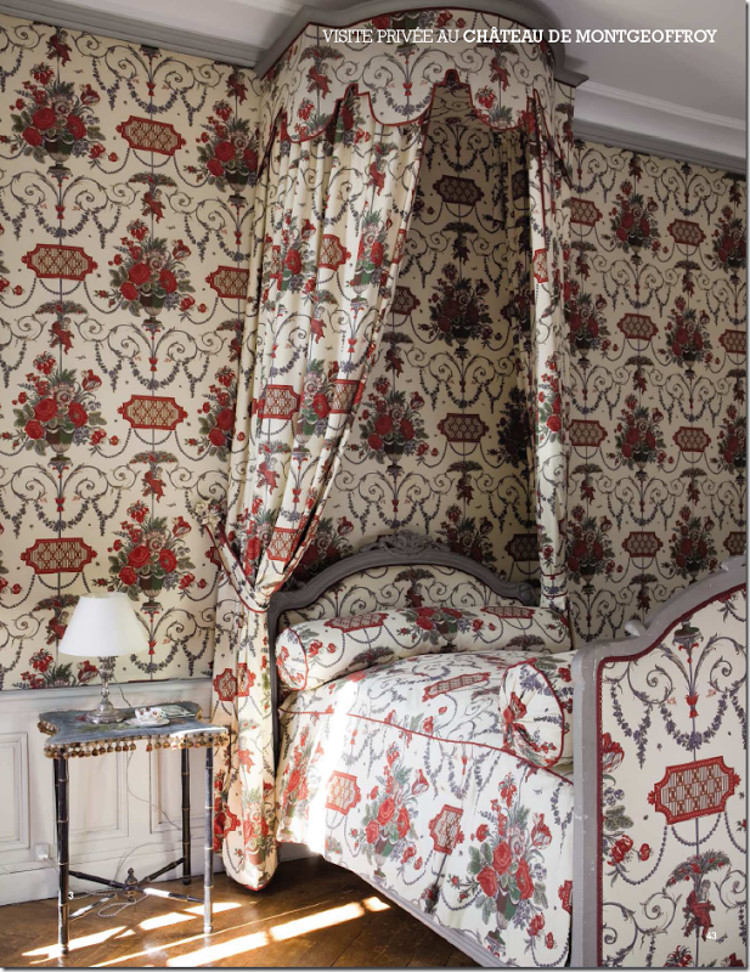 Two bedrooms in the historic French Chateau de Montgeoffroy were redone in the 18th century style using modern fabrics by Braquenié. The more vivid of the two is done  with a cotton print called Aix en Provence. The fabric features bouquets of red roses and other flowers mixed with geometric motifs, garlands and swags. Contrast piping on the bed, cover, pillows and tented canopy picks up the deep red. It’s interesting to note that molding in the room is also matched to the gray-painted Louis XV bed frame. 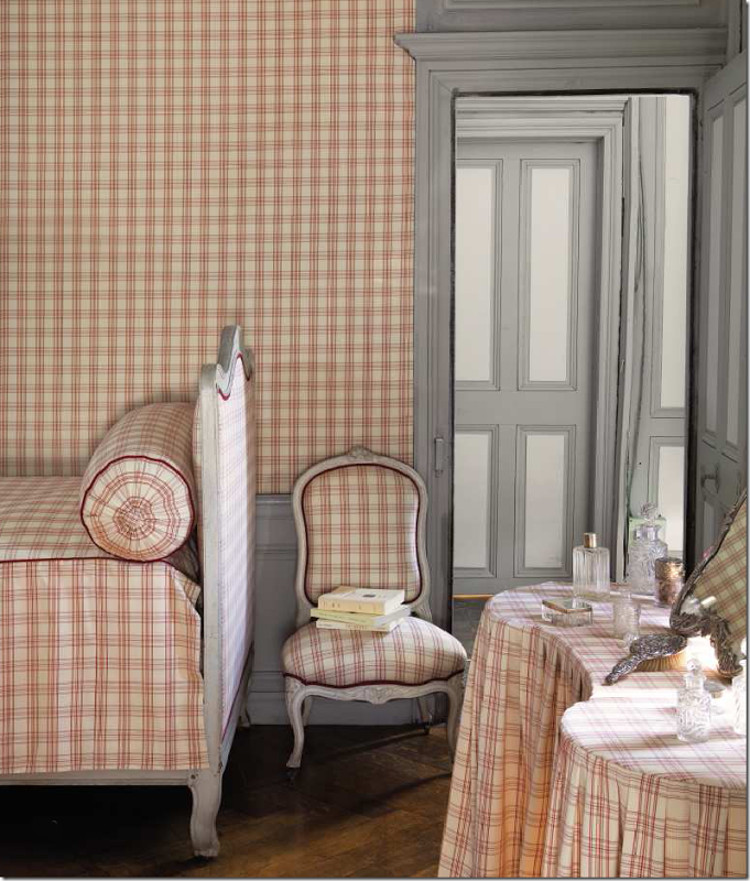 The pretty Beauvoir plaid gives another bedroom an almost girlish look. The fabric itself was inspired by a children’s quilt. Walls, bed covers, upholstery for the rococo slipper chair and even the dressing table are bathed in red checks on a cream background. But a single pattern used throughout a room can be soothing — as this one is.

The the Marquis and Marquise de Conades have opened the Chateau de Montgeoffroy for public tours by appointment. It would be a thrill to see these two rooms in person.