You are here: Home / Houses / Outside / One Stunning Garden Bench 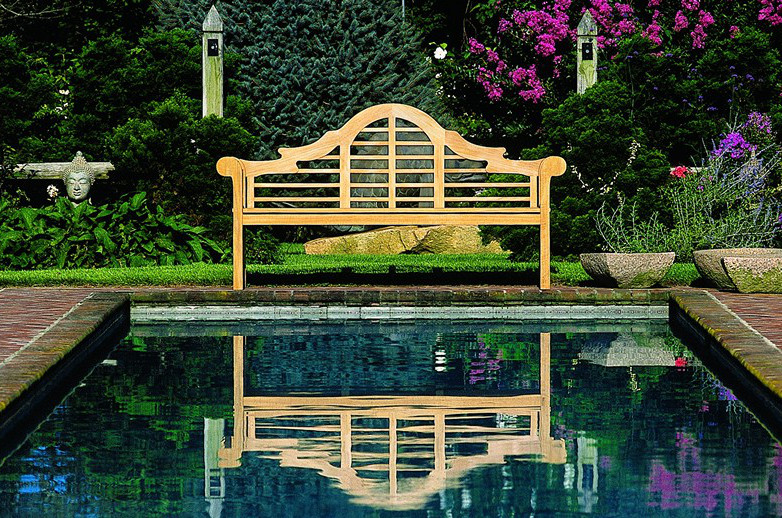 Large or small, modern or antique, a garden bench enhances even the most beautiful outdoor space.

How wonderful it is to sit on a garden bench and enjoy being surrounded by the natural vegetation and blooms. Even the fabulous Scampston Hall Walled Garden in northern England was designed with special garden seating. A landscape architect knows which furniture is needed for a garden but, for the rest of us,  finding the right garden bench is akin to shopping for a living room sofa. Size, color, style and the overall look of a bench needs to align with the garden’s mood.

Perhaps the most iconic of all garden benches is the one designed by Sir Edwin Lutyens (1869-1944) [top]. Now known as a Lutyens bench, it was first made for the garden at Thakeham, in West Sussex. Lutyens was  an English architect who practiced during the first half of the 20th century and his bench was inspired by Arts & Crafts furniture. This style bench is marketed widely by everyone from Sam’s Club to Restoration Hardware but it’s instantly recognizable by the scrolling arched back, horizontal slats, and high scrolled arms. We’ve all seen it on the cover of catalogues. A particularly elegant 6-foot long teak version is made by Kingsley-Bate, (about $1300) a high end garden furniture specialist. Lutyens Furniture & Lighting, a website maintained by the architect’s family, offers additional information and reading pleasure about Lutyens and his work. 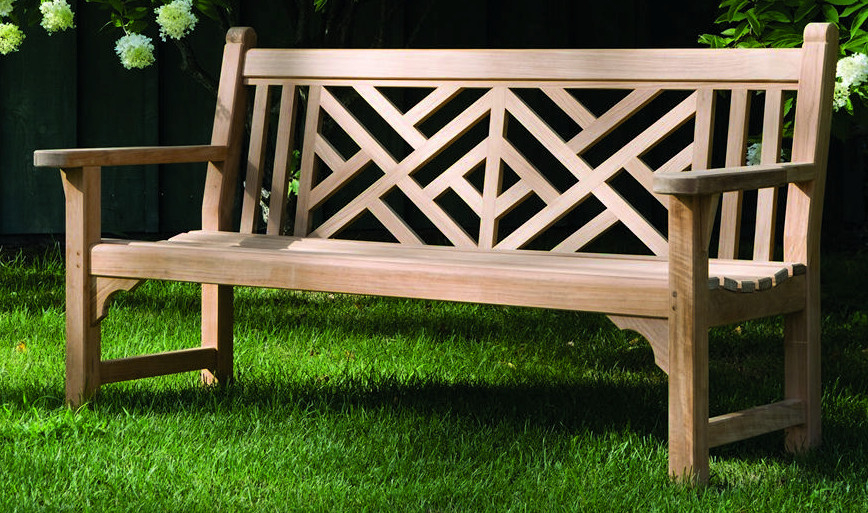 I’m partial to Chinese Chippendale motifs for home décor. So I could not fail to include Kinglsey-Bate’s 5-foot Chippendale, in teak. It’s a kindred spirit to the Lutyens’ bench though the geometric intersecting diamonds give it a slightly less romantic aura. 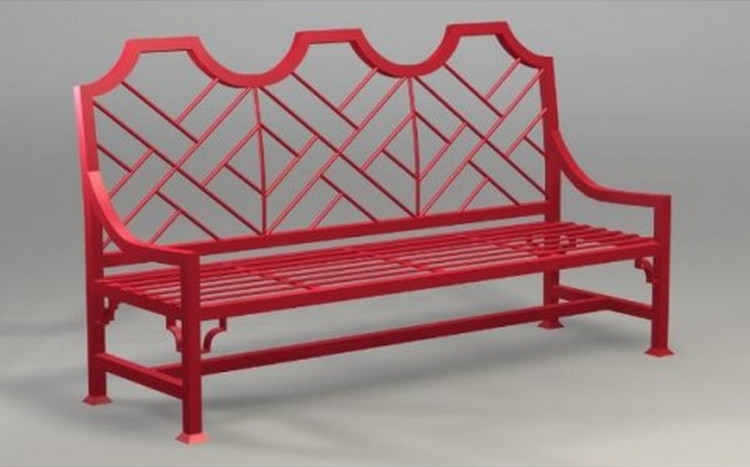 Versions of Chippendale benches abound in materials from faux-wood, to powder-coated cast iron and even aluminum. One of the most vivacious is the Manchester Chippendale Three Seater Bench, in Chinese red. The scalloped top defines each seat visually — as if two armchairs and a side chair had been fused into a 6-foot long sofa. Fine garden seating is expensive which this bench proves. ($4000 by special order from the Well Appointed House, in 15 different colors.) 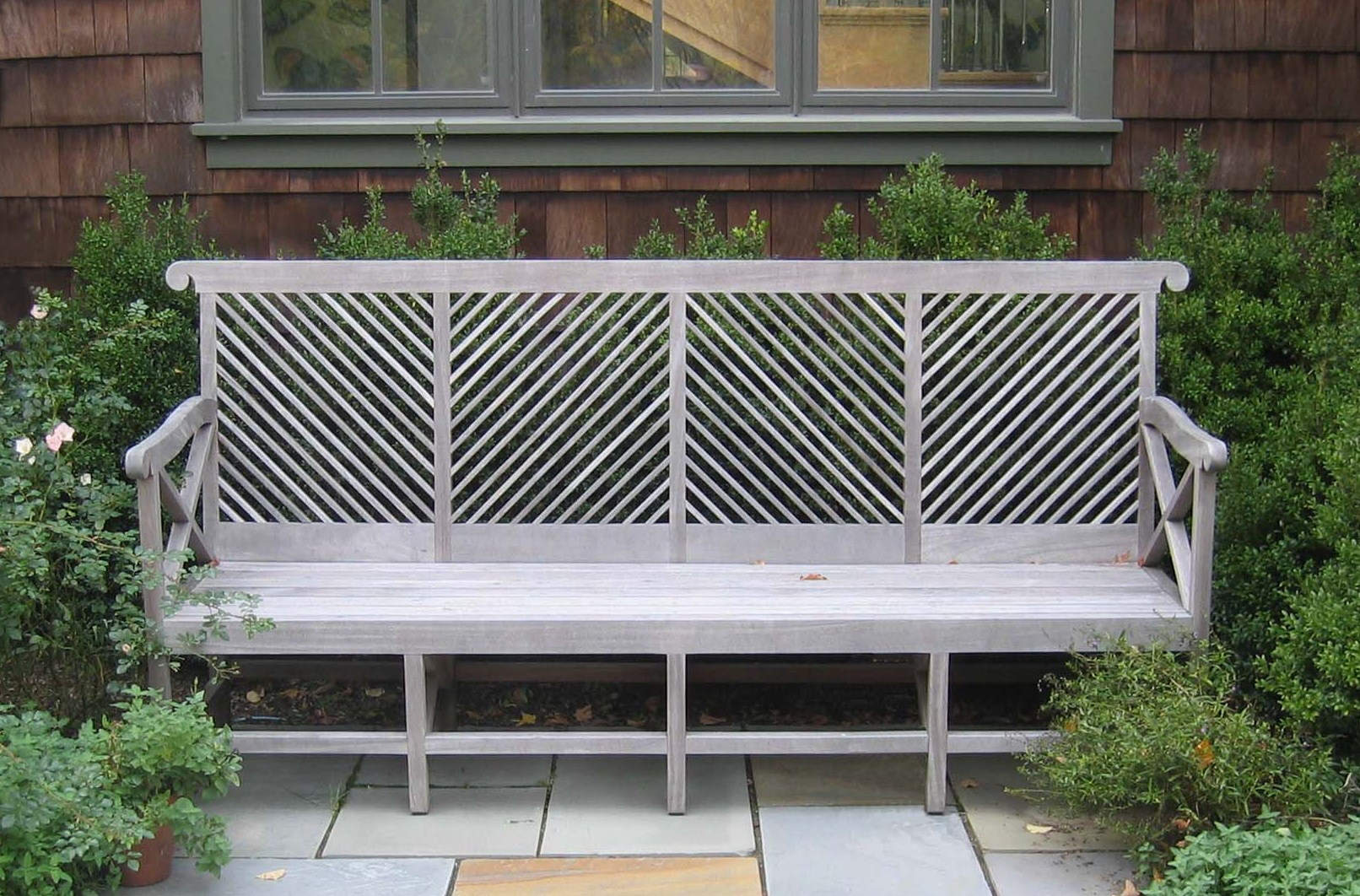 The New York based wholesaler Munder Skiles dials back the Chippendale to diagonal slats, adds a crossbuck on the ends, and produces a bench that looks quite modern. Their Almodington  (about $5300), is a bit of style chameleon, too. It works well in a trad garden setting but would also look equally great in a Southwestern desert  or on the grounds of a very modern home. 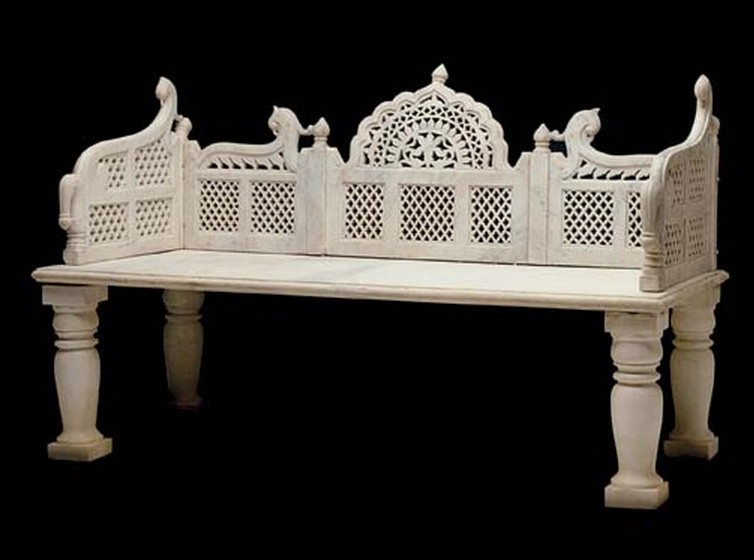 Majestic, intricate and decidedly quirky, a 19th century Indian Mughal marble garden bench fetched $22,500 at a Christie’s auction in 2007. Let me repeat: marble. About 5-1/2 feet long and nearly four feet high, it stands on six legs in the shape of classical turned columns with square bases. Intricately carved with inset lattice panels and a scalloped fan on the back, it dates to the time of the English Raj and expresses the spirit of two cultures. Sold from the collection of Robert H. Ellsworth, a leading New York dealer in Asian art, it would be a knockout in the most minimalistic garden as the form is so elaborate and romantic — Victorian really. 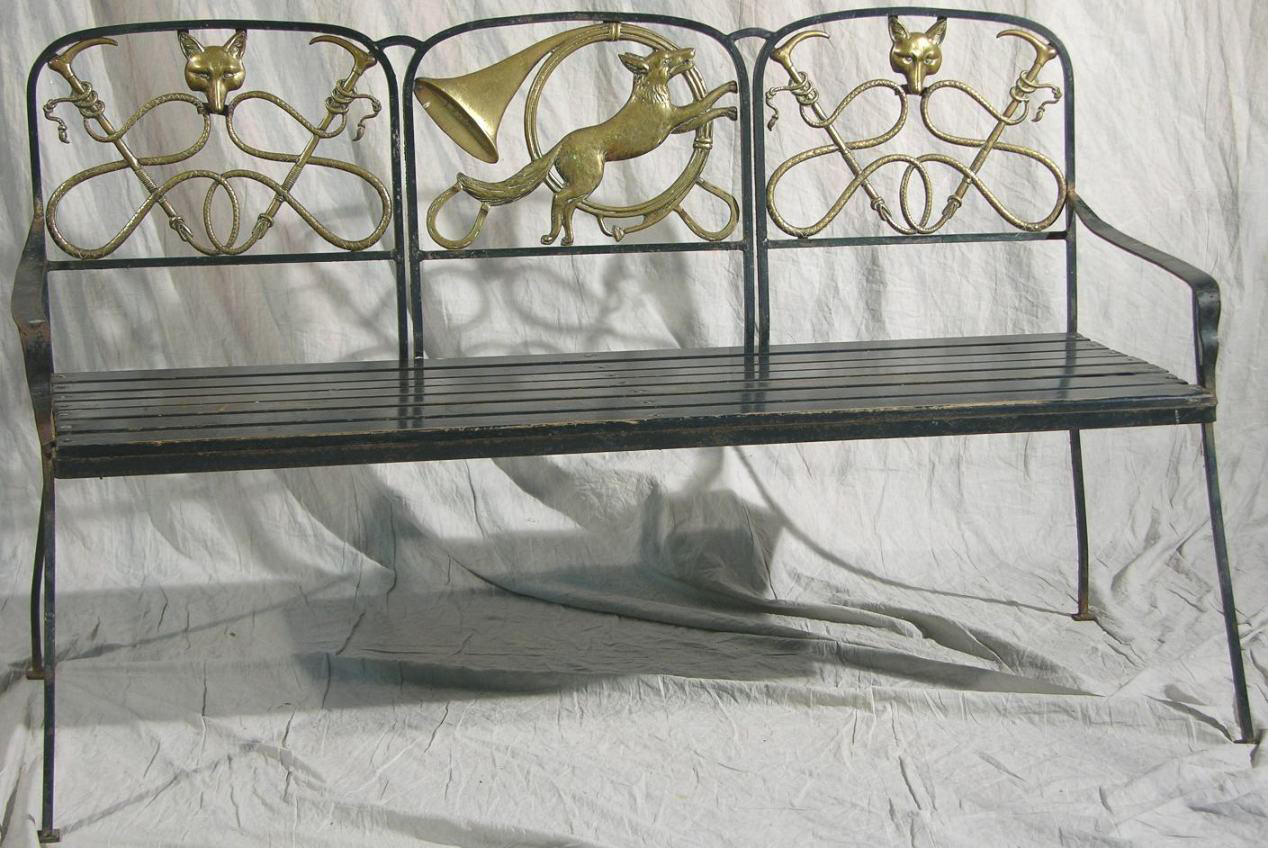 A fanciful and uniquely vintage black metal bench — with fox hunting motifs rendered on the back in brass — was put up for auction with the modest estimate of $400-600. I would have grabbed it at that price! While it might not have universal appeal, it’s an example of how the special interest of a home owner can be expressed beyond the choice of flowers for garden borders. 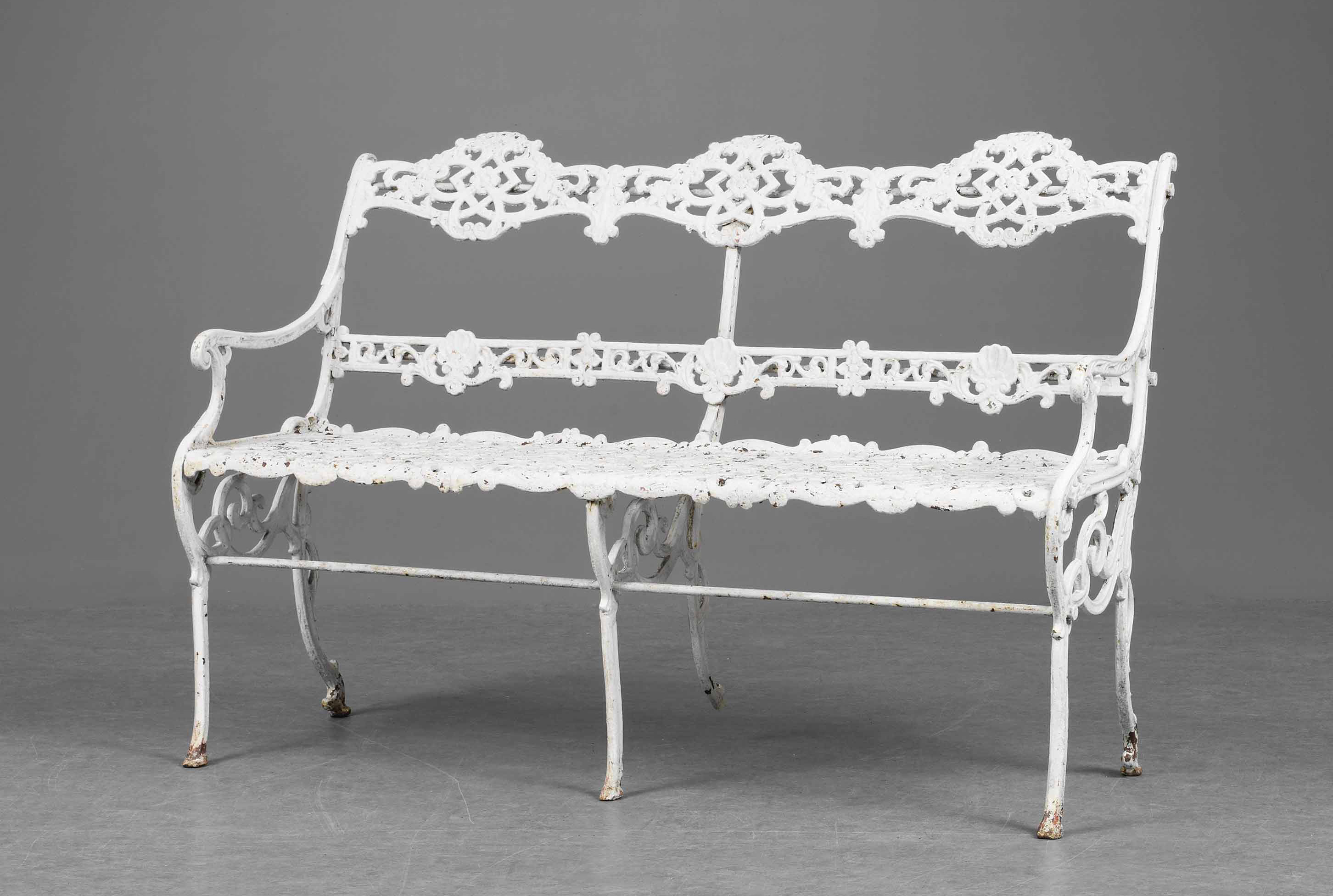 While Swedish furniture had been wildly popular over the last decade, antique Swedish garden furniture is lesser known. This early 20th century white-painted, cast iron bench has looping openwork with classical and natural forms. Offered was at auction in Stockholm, a bench of this type has a rare feminine quality that would be at home in a cottage garden. 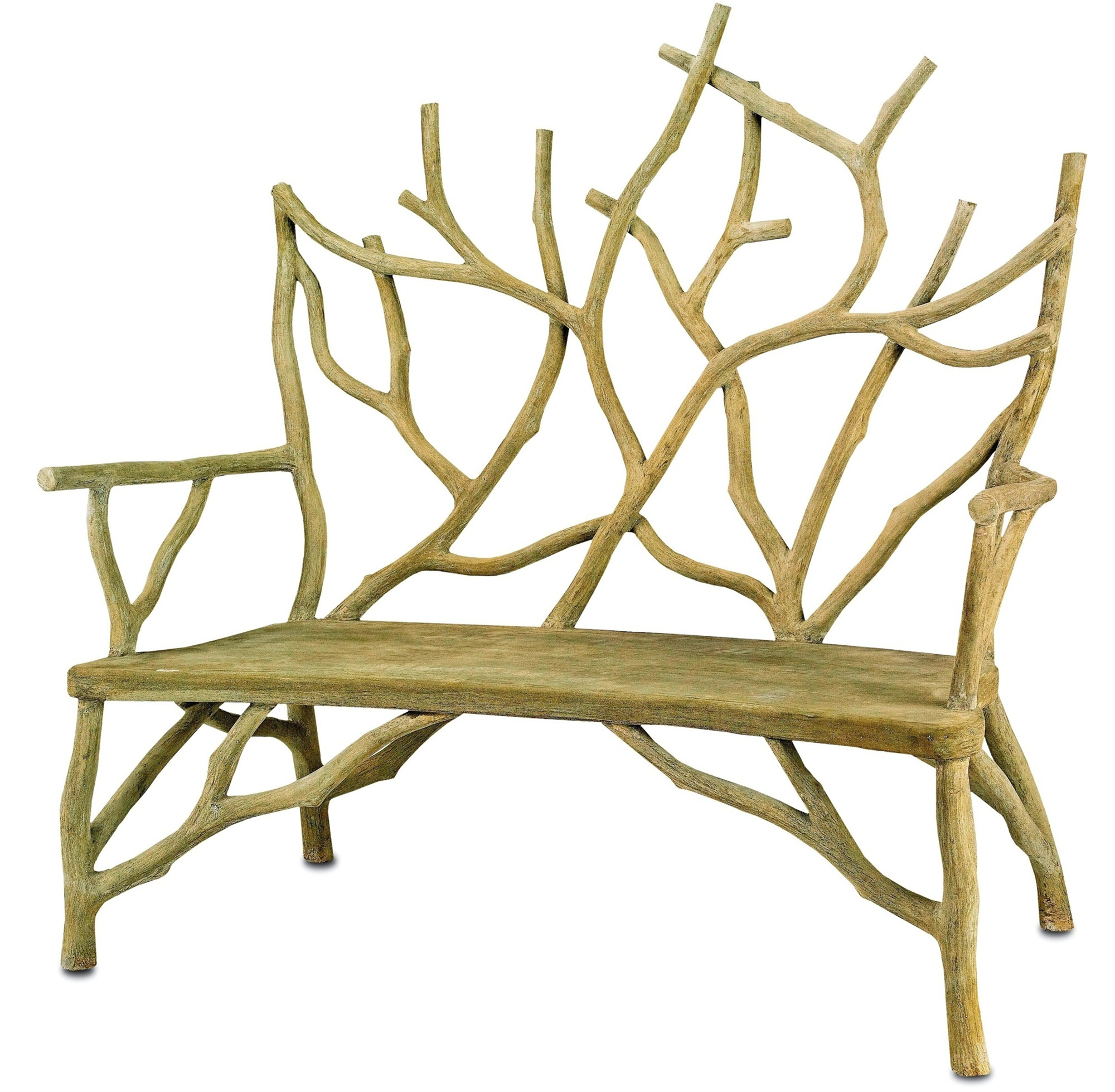 Faux-bois benches are made of concrete or composition. This one reminds me of the antique Victorian twig bench at Olana, the historic home of American painter Frederic Edwin Church near Rhinebeck, NY. This faux-bois is the Elwynn bench, from Currey & Company (about $3800), just oven five feet long, and almost as high. The back “branches” have the same lacy quality as a wintertime tree without leaves — affording a view of the grass, greenery and the landscape beyond.

Copy and Paste the Link to Quick-Share this Post: http://bit.ly/1RWS0If