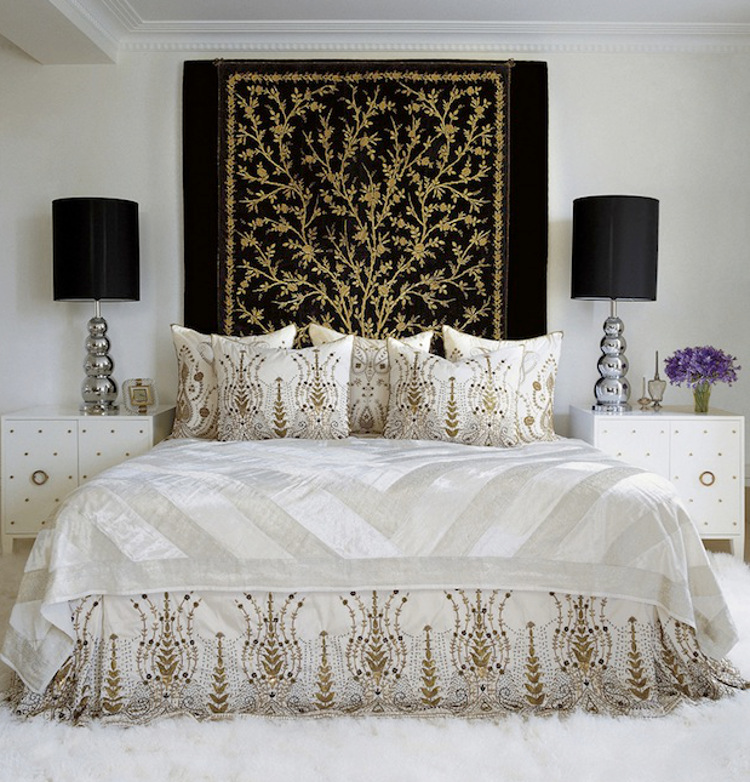 Bedrooms by Martin Lawrence Bullard are tailored to each client — at least on the surface.

That’s certainly true of four bedrooms by Million Dollar Decorator star Martin Lawrence Bullard whose work I first saw on the Bravo TV show. The series I caught showed Mr. Bullard decorating the New York home of Jimmy Choo shoe queen Tamara Mellon. One highlight was the episode where a massive piece of stone for the top of the dining room table was hoisted into her townhouse by a crane set up in the street. Last year, Ms. Mellon filed a lawsuit against the decorator, as reported by TMZ. One claim was that the stone had been mis-measured.  Meanwhile, the exquisite white bedroom [top] — which Bullard designed for his client during the happier days of their relationship has appeared in several magazines.

I don’t often get as enthusiastic about a bedroom as I am about this one. A primary appeal to me is the way Bullard uses unusual textiles and their patterns. I like the style and the mix. The leitmotif is an enormous 18th-century Ottoman tapestry with flowering branches. The dark textile covers the wall behind the bed with the effect of creating a mammoth headboard. A flowing bedskirt and covered pillows in white custom silk have a gold-embroidered vine pattern that blends wonderfully with the tapestry. The fabric’s source is L.A.’s Silk Trading Company. A tone-on-tone coverlet lets the repeated vine motifs dominate. The furniture plan includes a pair of cabinets flanking the beds and a pair of lamps. Here, the cabinets are white lacquered French antiques from the 1940s. Bullard favors bulbous mid-century lamps — these are 1960s mercury glass, an interesting counterpoint to the brass cabinet detailing and gold embroidery. 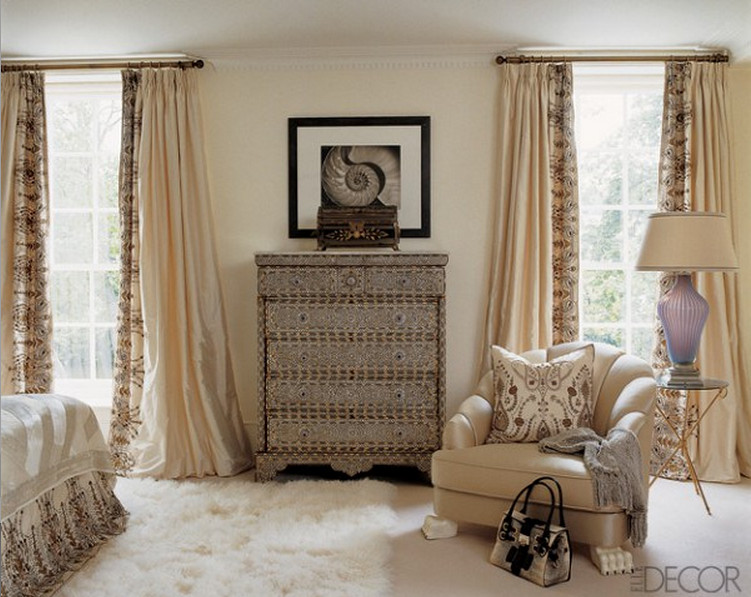 Another view of the bedroom shows how the same embroidered vines work richly on the edges of the curtains. The genius of the pattern is that it can reads equally well horizontally or vertically. An elaborate chest of drawers is typical Syrian inlay, another antique. Syrian furniture is a special taste not well known in the west.  Given conditions in the Middle East, it has become even more precious. Another mid-century glass lamp — this one lavender — serves a corner of the bedroom. Bullard’s brashness is tamped down in this bedroom for the most part, emerging only in the crazy lion-paw feet beneath the upholstered chair. 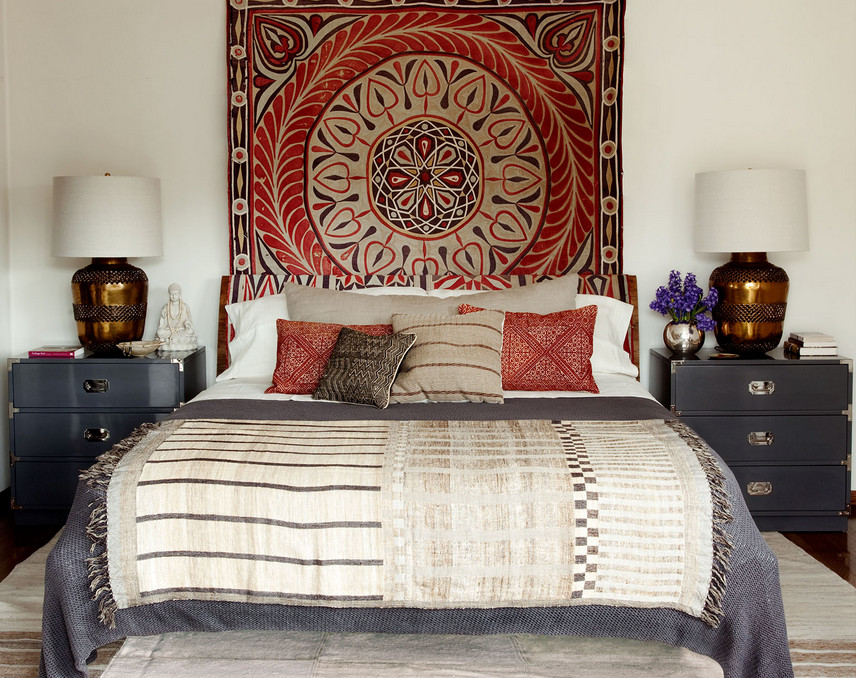 An Asian-inspired bedroom has a different look but the composition of the bed area is similar to Mellon’s. Again, there is a monumental textile plus a headboard upholstered in coordinating fabric. The principal bed covering is topped by a lovely fringed throw that adds a layer of pattern and coordinates with pillows. Flanking the bed are a pair of Asian style dark lacquered 3-drawer chests topped by  pair of lamps with a bronze-finish lamps. 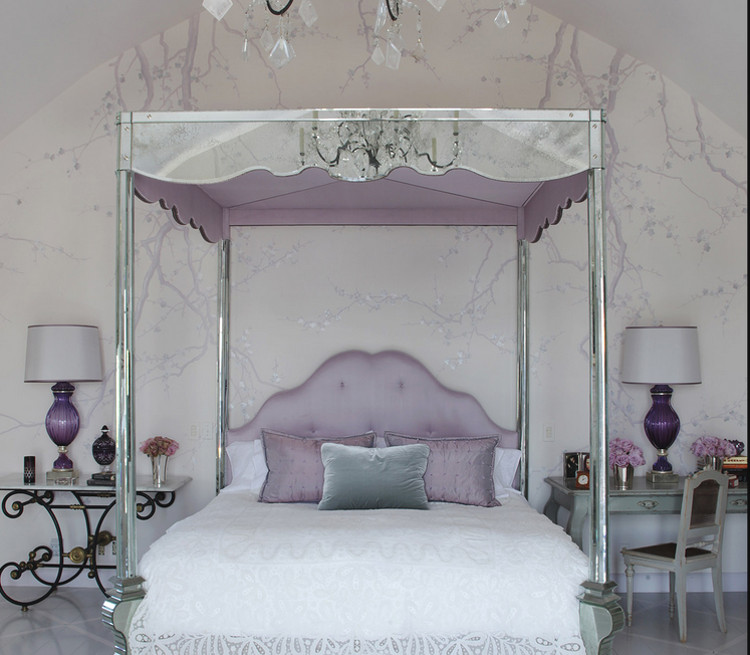 or the home of TV personality Sharon Osbourne, Bullard created a tour de force mirrored canopy bed. Lavender fabric used on the pholstered shaped headboard is repeated inside the canopy. The delicate lacy bed covering has a bow motif. Bedside lamps are lavender mid-century glass. Non-matching tables replace chests in this bedroom  — one a French marble topped pastry table with a scrolling iron base. The table to the right of the bed is painted in the Swedish style. 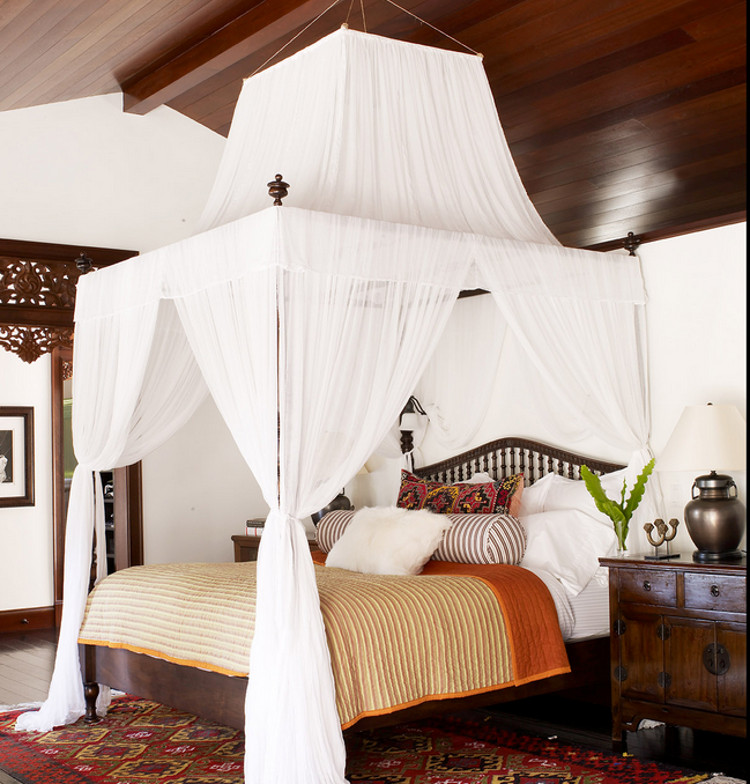 In tropical climates canopy beds are sometimes draped with mosquito netting. Bullard blends form and function since the fabric pulled back against the bed posts can be unfastened to enclose the bed if necessary. A striped quilt has a plain reverse side in a vivid red-orange to coordinate with the oriental rugs and rug-covered pillow behind the bed roll. Here, too is a pair of Asian chests neatly matches the dark teak hue of the ceiling and pierced wood fretwork in the doorway. This South Seas inspired bedroom by a top decorator also has a footprint that works with many styles.

Copy and Paste the Link to Quick-Share this Post: http://bit.ly/1eAyW6y