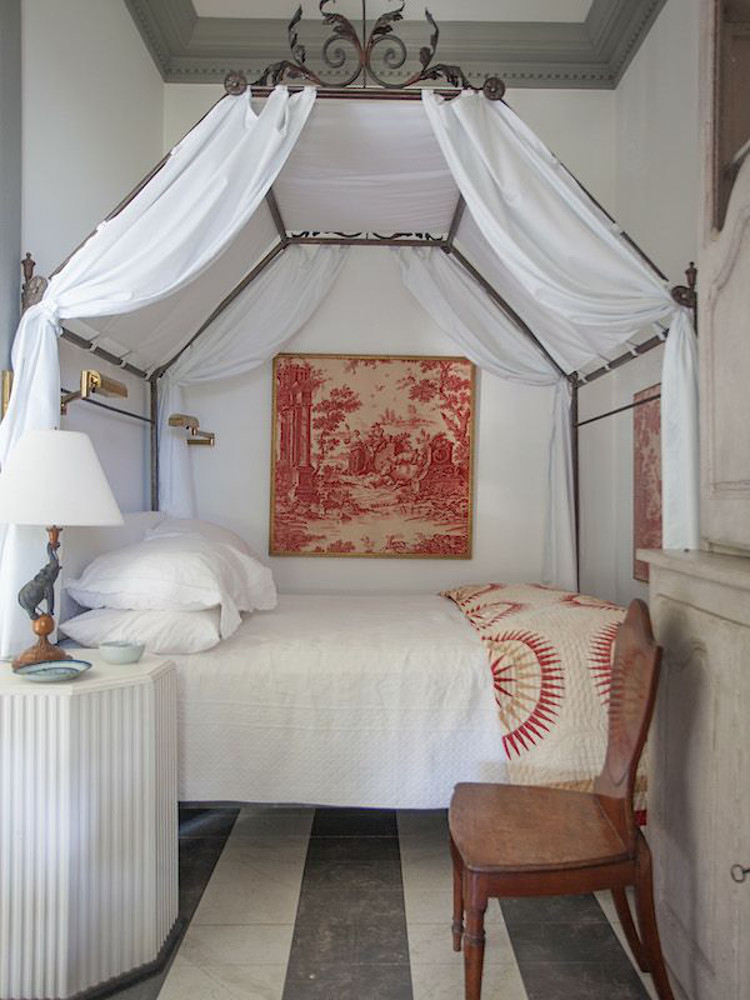 Before homes had central heating, draped canopy beds kept out the cold and provided privacy.

Modern draped canopy beds rarely have a specific function. Their primary purpose is to use textiles on a bed that sets the style for a room. Purely decorative,  canopy beds can create specific a mood — after all, it’s like having a tent pitched in the bedroom.

I tend to favor iron-frame canopy beds — the subject of a past post — which are left undraped to showcase their architectural qualities. The iron-frame bed [top] in a Georgia cottage owned by cult nonagenarian designer and author Furlow Gatewood, is used cleverly to make a very narrow room appear wider. The bed is set crosswise into the end of the room, much like a daybed. Notice that it pretty much butts up against each wall. A “window” is cleverly cut into the main wall with a framed fragment of old red toile while another piece of toile repeats the “window” in the wall at the foot of the bed (right). While the dark bed frame is clearly visible — pushing the walls out visually — white fabric, with convenient tie-ons, blends in. Draping fabric over the top and sides of the top of the frame creates a second ceiling — deftly muting the room’s “railroad car” proportions. Even the scroll and leaf crown ornament on top of the frame is welded the side of the frame instead of the heat or foot. That also helps reorient the bed in a very subtle way.  A close look at the way this bed is used in the room shows why Furlow Gatewood is so respected for his design savvy. 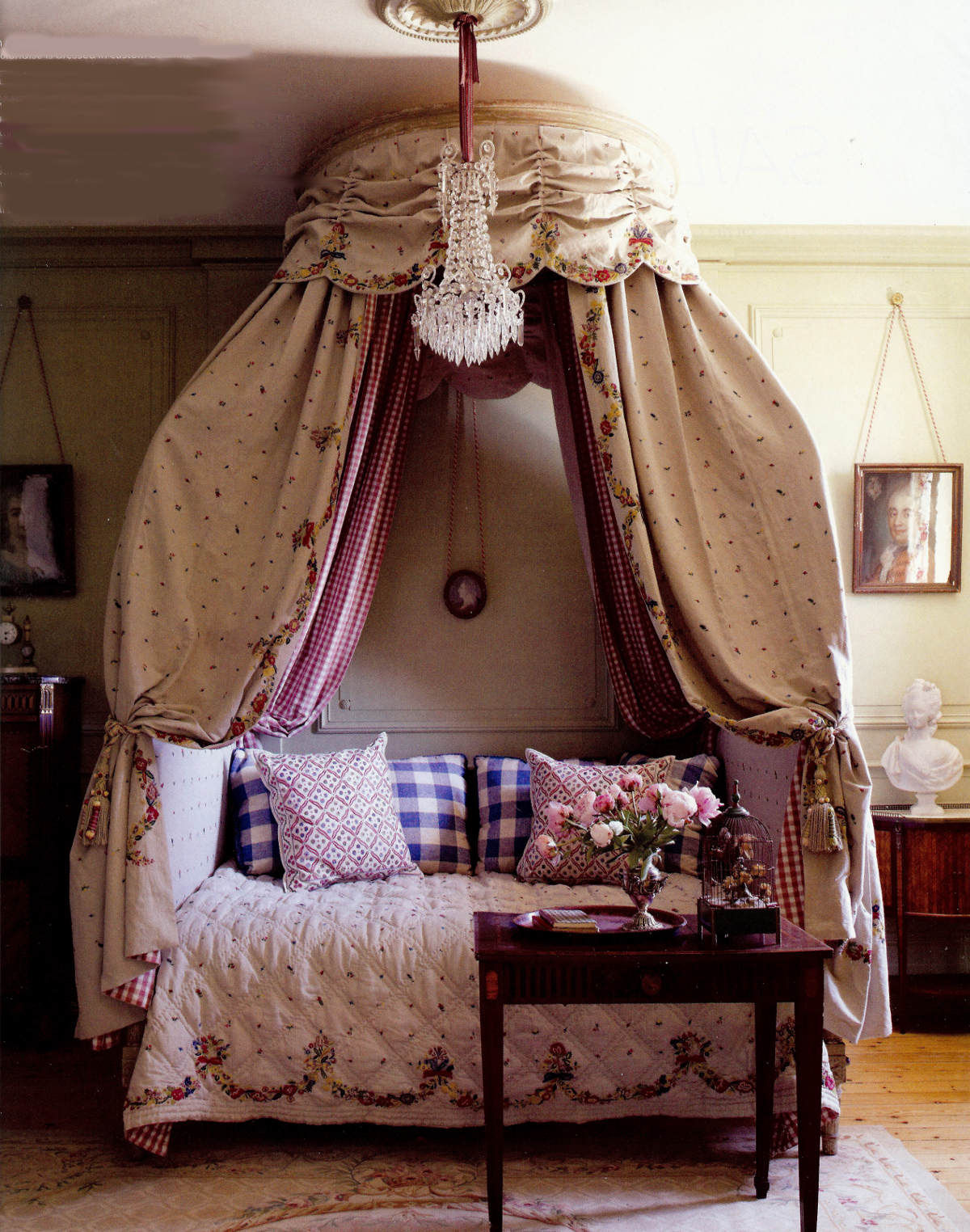 The idea of a lit à la polonaise, or Polish bed, is an 18th-century notion that will never die. This is another “sideways” bed — basically a daybed. The head and foot boards are of equal height and a round canopy creates a symbolic crown while supporting the draped fabric. This style can be especially exuberant and has been the inspiration for the little girls’ “princess” bed, with good reason. In this Gustavian-inspired guest room it’s girly but too posh to be childish. Custom hand-embroided Chelsea Textiles linen is used on the ruched canopy and the drapery. A quilt was created with the same swagged garlands and flower motif. Red and white checked lining and contrasting blue-and-white windowpane-check pillows are nods to the popular Gustavian Swedish look. True, it’s a classic but along with the Aubusson rug and bust of Marie Antoinette, it’s also a bit earnest — a guest room for show but not necessarily for comfort. 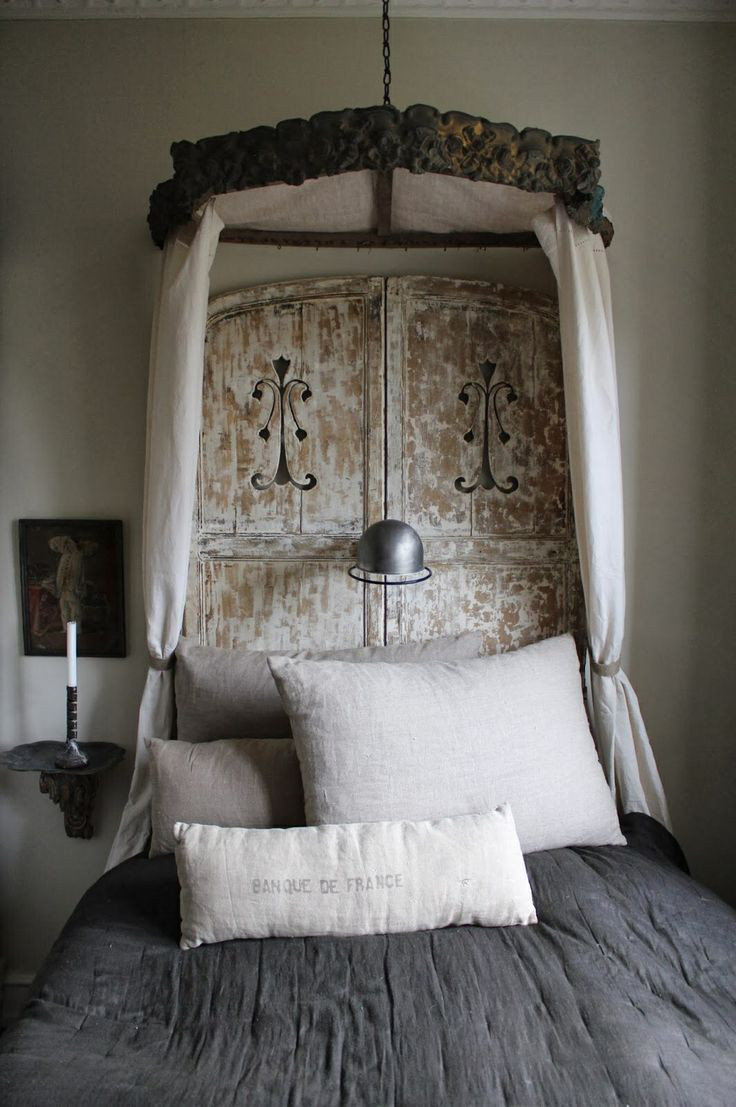 A modern Danish take on a draped canopy bed mixes a number of trends. While it’s not necessarily a professional look it’s a fun way to combine vintage pieces collected by a furniture dealer in Copenhagen. This canopy is fashioned from a carved frame (which looks Balinese) suspected from the ceiling by a chain. With linen covering the top and cascading from the inside, it is used to frame a pair of Art Nouveau style shutters with a stylized pierced tulip design. A modern reading light is fixed to the shutters and once-trendy flour sack pillows are used on the bed. It’s a twin though, so it’s spare. But the point is made in an easy way. 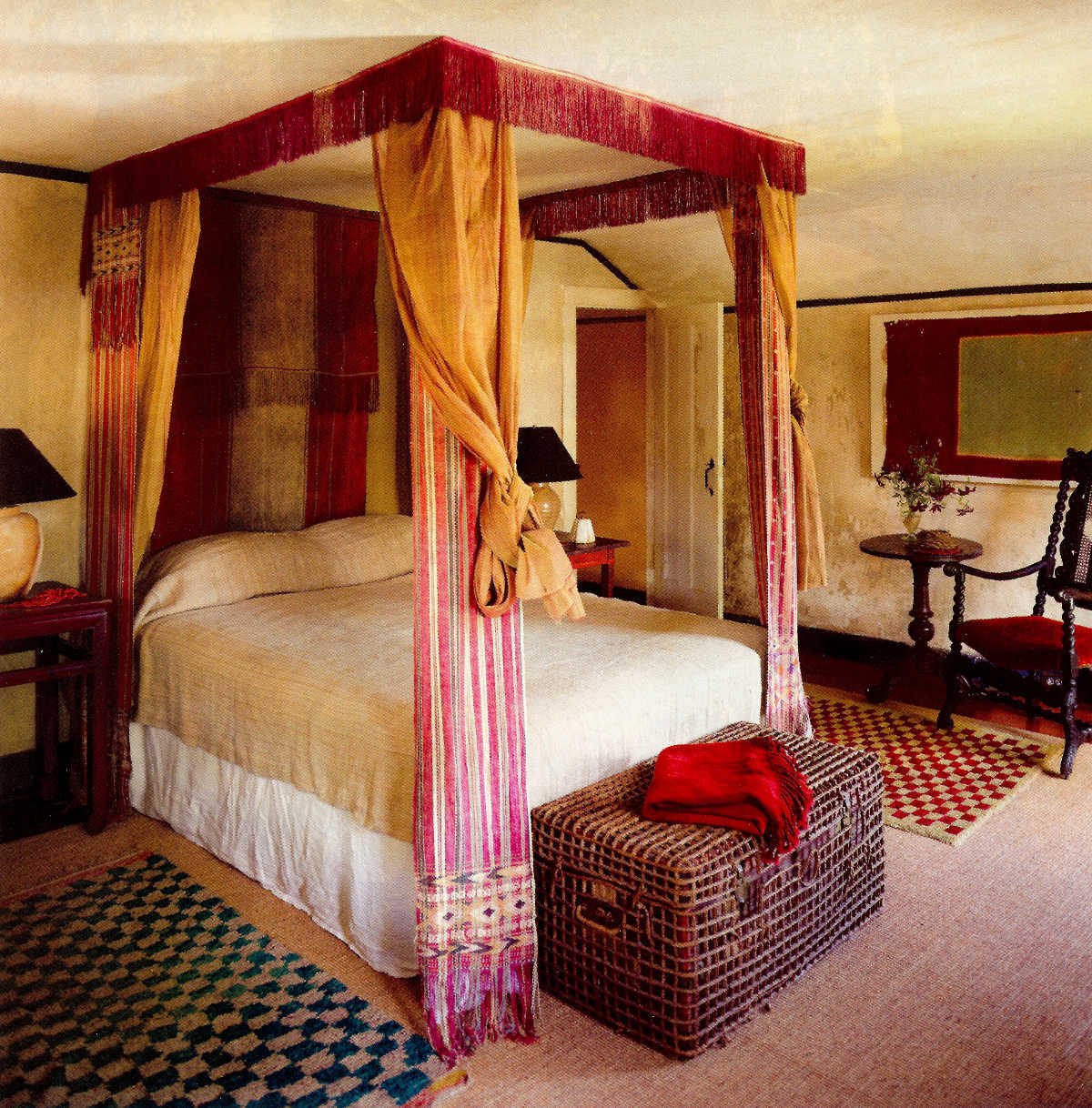 In the guest room of an English house, Asian textiles — from 19th century Bhutanese monk’s robes and sashes – hang above and at the corners of this canopy bed, giving it a unique look. A second textile as added and knotted back in the manner of mosquito netting. Plain linen sheeting in white and natural flax colors dresses the bed simply but in harmony with the overall straw and crimson color scheme of the room. 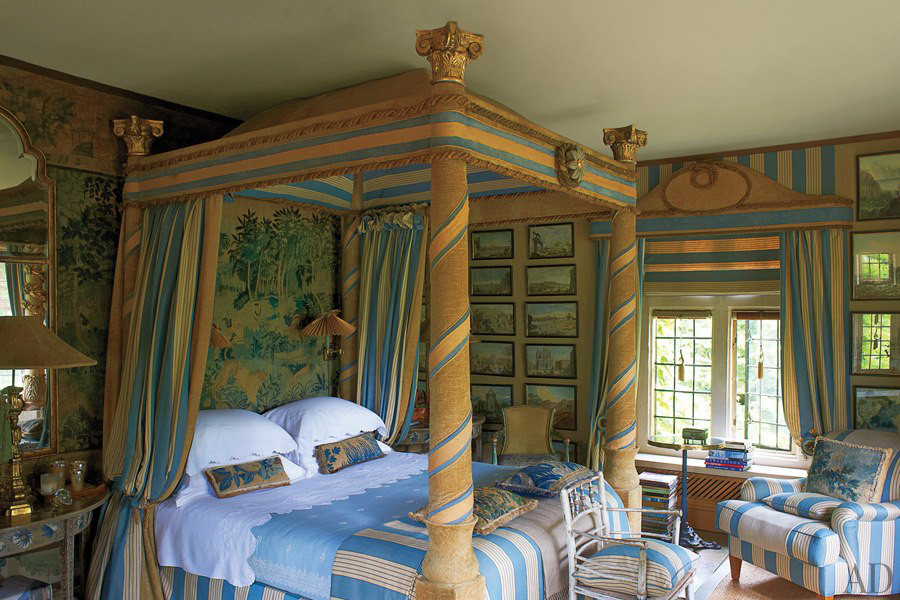 The great English designer Anouska Hempel created an tent-stripe fantasy bed from burlap, velvet and cording for the Oriel Room, a guest bedroom of her country mansion in Wiltshire, England. With gilded Corinthian columns protruding through the top of the canopy along with tent-stripe walls. and curtains, the Napoleonic look might not be for everyone. That could also be said of other parts of the house which include an elaborate antique Delft tile Crazy ‘Bout the Blues bathroom and a formal garden dining room created from monumental hedges that serve as outdoor Living Walls. 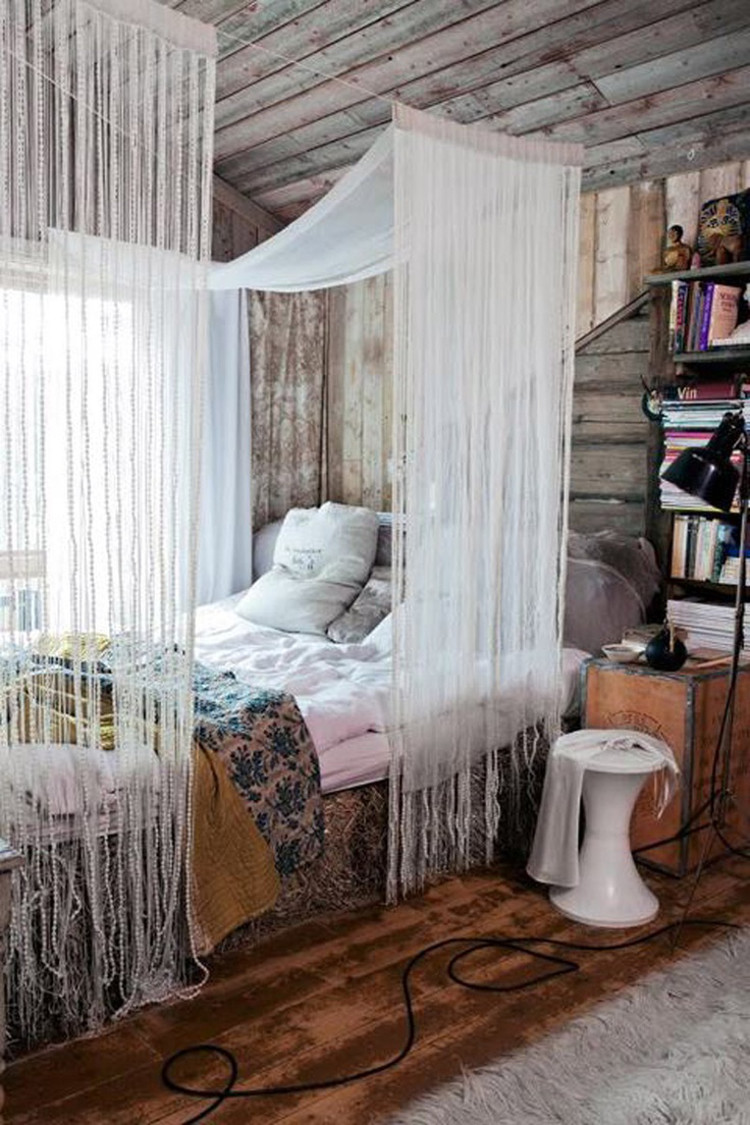 A Scandinavia boho bed is simple and ever so cool. Stout cord creates the framework and the canopy runs sideways so that one end of the drape also serves as a sheer curtain. This cabin-in-the-woods look is loads of fun, easy to recreate and has the same authenticity as any elaborate designer production.

Copy and Paste the Link to Quick-Share this Post: http://bit.ly/1cUoLYH