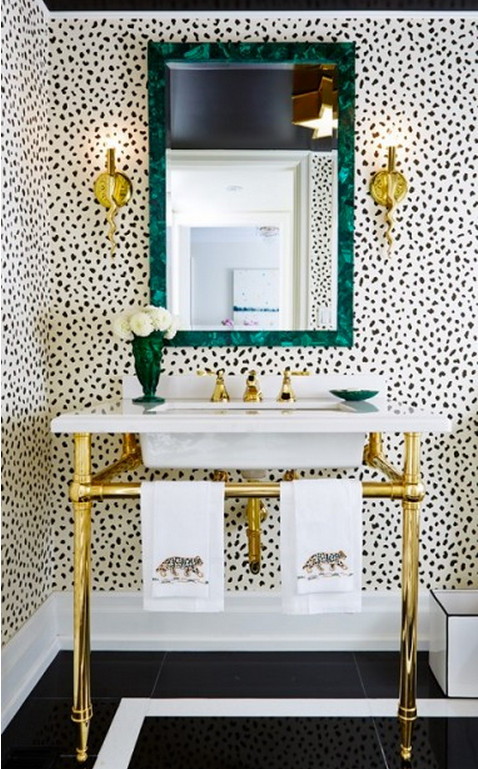 Some designers favor bathroom wallpaper for its power to add color, pattern and a specific style to a bath.

Bathrooms are often difficult to decorate because, on average, they tend to be smaller than other rooms and their functional elements often chop things up. But an overall wallpaper pattern can be a unifying feature in a bath, in addition to adding visual interest.

I’m often surprised — though I shouldn’t be — at the sheer numbers of wallpapers on the market.When I see one I particularly like it’s often impossible to locate the source, at least online. And wallpaper is an area where young designers are weighing in with new patterns — most recently I received images of 3D wallpapers generated by a design group in New York. Wallpapers like those are quirky while others are classic — designs that continue to sell, are easily to identify, and often used by designers. That, for me, is what makes them classics.

Thibaut Tanzania.  [top] Animal prints are forever and this one creates a stunning transitional bathroom. Credited to Toronto designer Jessica Claire, the bath has a black ceiling and white trim ecohoed by a black floor with white border. Tanzania — black on cream —blends surprisingly well and the spots are not blinkingly dense.The addition of a bright green accent to the black and white scheme is via the Made Goods Vivian malachite mirror which feels 1950s but without looking retro. At the same time, the mirror is quite glam. Brass legs on the marble-topped console sink, a brass faucet and coordinating sconces might be the design statement in a bathroom with less personality. Not here. Prowling leopards on the fingertip towels are just too much fun. 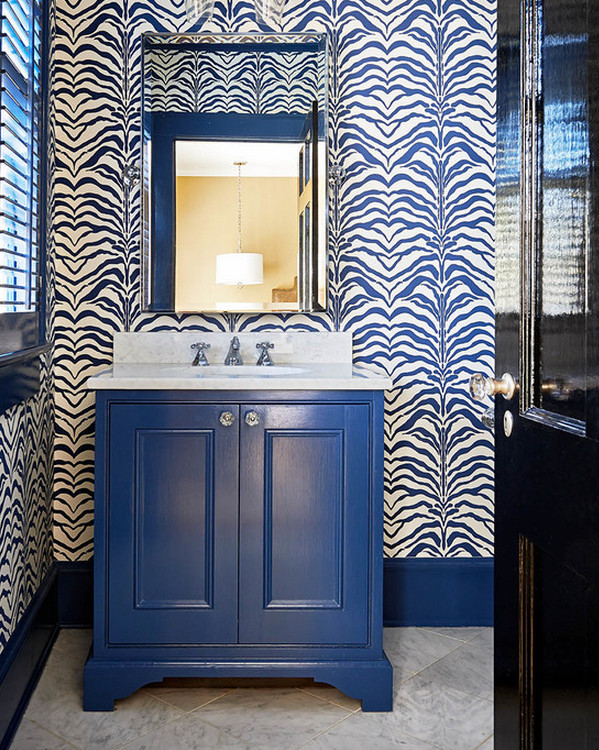 China Seas Bali II. Asian textiles have a distinctive method for creating geometric and semi abstract patterns with special charms. The best known are ikat and batik which the China Seas collection introduced to the U.S. market during the late 1960s. The colorful patterns have become decorating staples. One look at the elegant brown colorway of the Bali II pattern in a bath by Connecticut designer Julie Nightingale shows how well the stylized birds and abstract shapes of Asian imagery blend with modern mirrors and sconces. 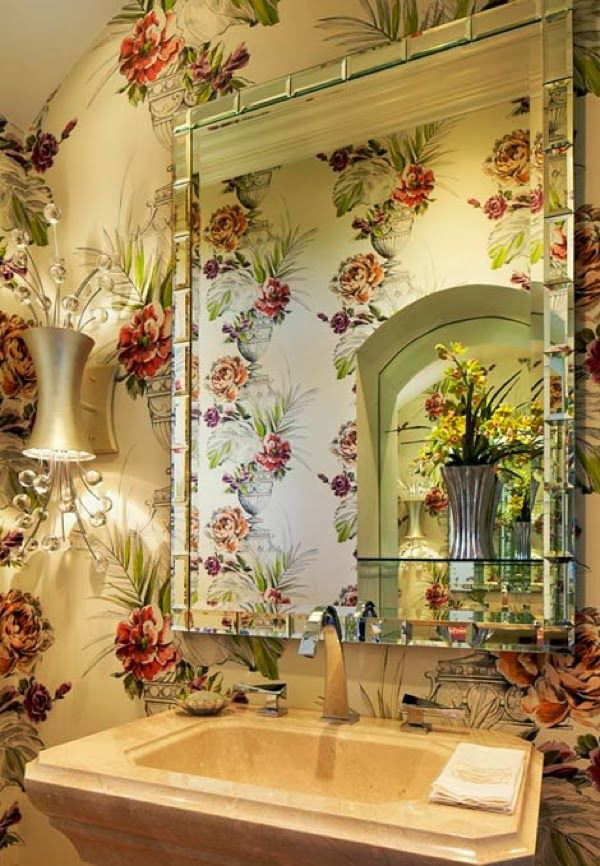 Designer’s Guild Zephirine. Either you’re a chintz person on not. I am but not always. I do love modern chintz, especially the sometimes whimsical reinterpretations of blooms in urns like the Designer’s Guild Zephirine (Topaz) used for a powder room by designer Judy Howard in a West Palm Beach showcase. “Powder rooms should be alive with color and sass to make up for their tiny dimensions,” Ms. Howard told an interviewer. I agree. And the mix of this pattern (which actually is a silk fabric though Zephirine wallpapers are available in other colorways) with its 1960s colors, a Sherle Wagner pedestal sink and a Century Furniture mirror feels just right. Adding a crazy pair of Kentfield Collection sconces hows how granny flowers can — and should — be reinvented.

De Gournay English Landscape. De Gournay’s wallpapers are so De Gournay it’s easy to spot them. They have an antique look and super traditional themes, often bucolic landscapes or scenes based on nature or animals. The designs are historical, extremely traditional and the papers are definitely investment grade. I’ve written about DeGournay’s classic fish wallpaper in my Powder Rooms Papered post and the same paper, used for a kitchen wall, appears in Oak Gets a Modern Makeover.

This grisaille English Landscape pattern, in the Eau Forte colorway was chosen for a powder room by Frank Ponterio for the Ritz-Carlton Design Showcase in Chicago. The appearance of a De Gournay paper is always a signal that there’s some serious decorating going on. 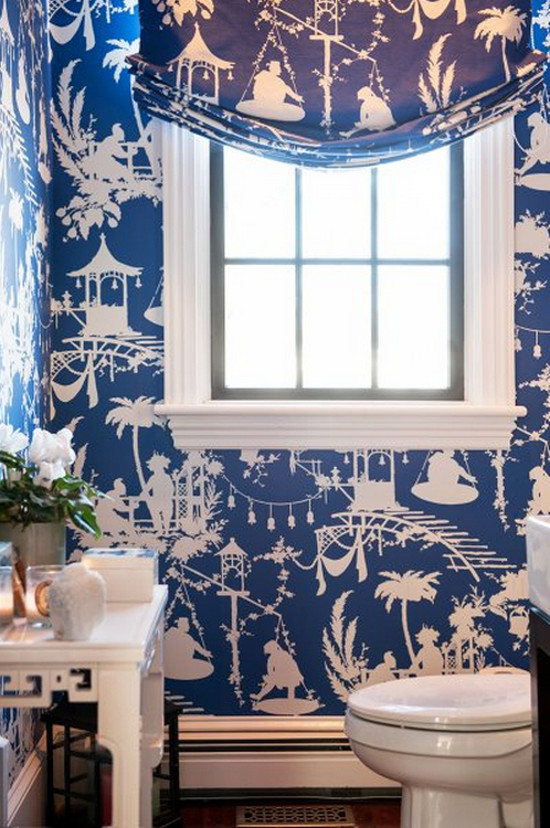 Thibaut’s South Sea. The exuberance of Thibaut’s South Sea navy wallpaper, from their Resort collection, shows how a theme paper makes a bathroom unique. All you notice here is the Chinoiserie motif which designer Robin Pelissier backed up with an Asian style console table. A window in the center of a powder room wall is tamed by a roman shade made of matching fabric — it’s handy when a wallpaper house offers matching fabrics. Bold and amusing this wallpaper is an exceptional choice for a lover of color and pattern in a house that doesn’t take itself too seriously.

The paper comes in a total of seven colorways including a shrimpy pink, lime green, classic orange, turquoise and a gray which has a ghostly and almost antique look that creates quite a different and less colorful mood. Fascinating.

Copy and Paste the Link to Quick-Share this Post: http://bit.ly/1JAnsuV