You are here: Home / Houses / Outside / Scampston Hall Walled Garden 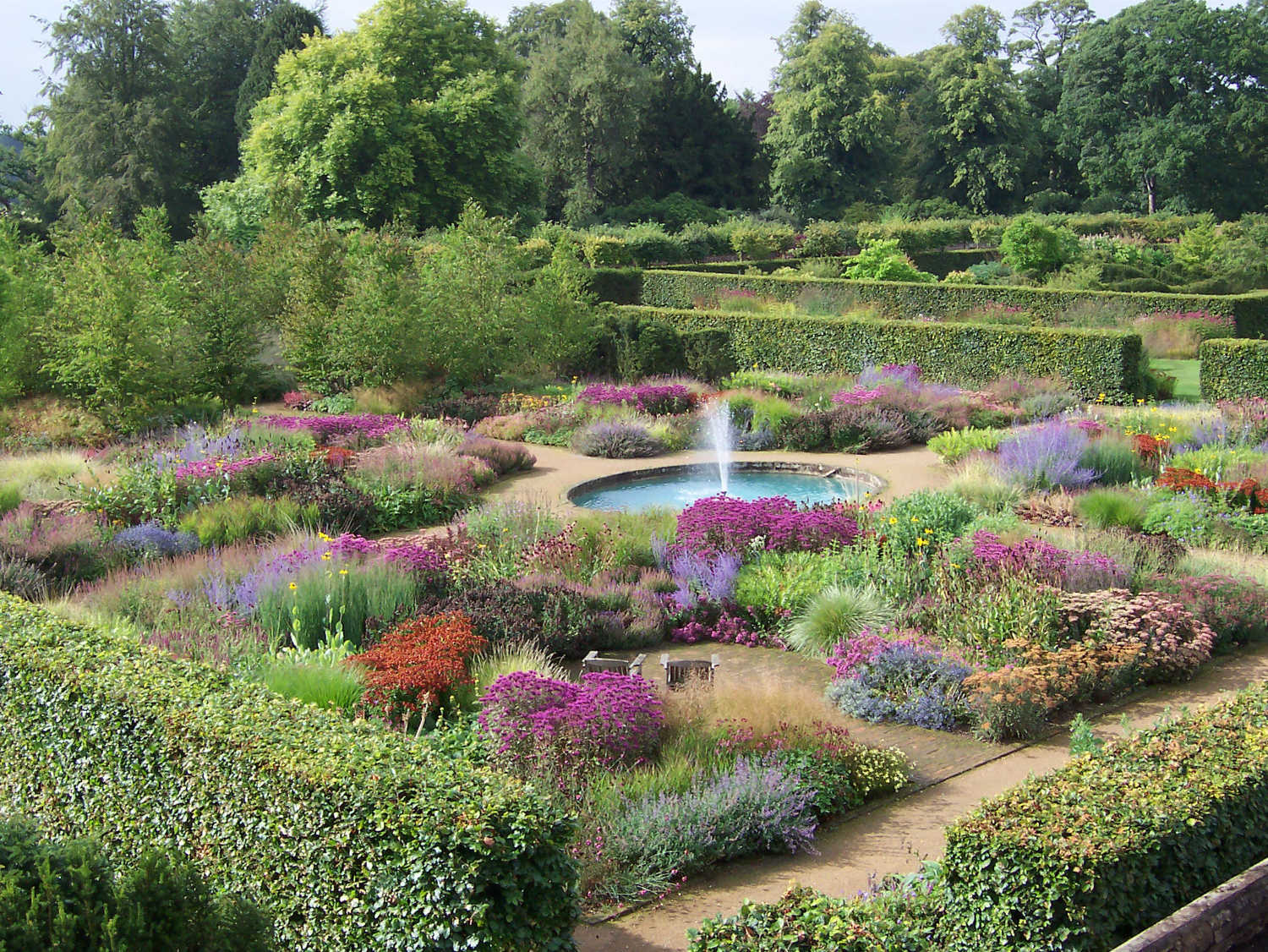 The Scampston Estate Walled Garden has a modern style with woodland plants and ornamental grasses.

The walled garden at Scampston Hall is one of two must-see gardens in northern England. On the grounds of a Regency country house in Yorkshire, the house and garden has been in the hands of the same family for more than 300 years. Like many stately British homes, public tours of Scampston’s walled garden, as well as the house with its own formal gardens, are available to anyone planning summer travel in England. The house and gardens are open to the public from April to November (Tuesday through Sunday). 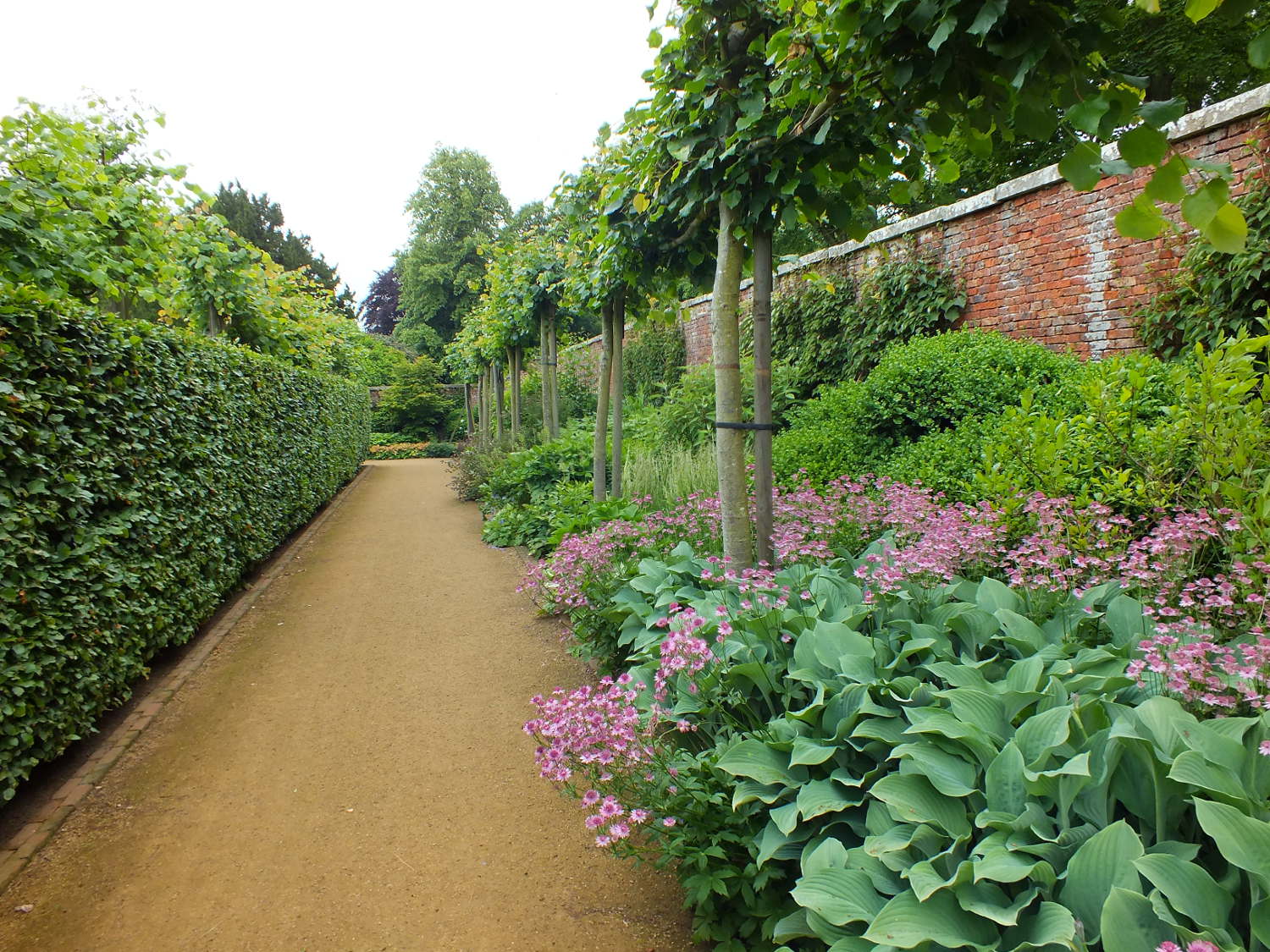 My interest in Scampston was sparked by some of these photos, which appeared in British House & Garden. I was immediately taken by the way informal “meadow planting” and hedge walls were combined. While I am not a gardener I have a special interest in walled gardens composed of living rooms defined by hedges which I’ve detailed in past posts on Gardens Most Amazing and the Architectural Museum Garden at the DIA Beacon museum. Scampston also boasts pleached lime trees which are trained so the tops weave together to become a single horizontal mass.

The Scampston Walled Garden is a behemoth — 4-1/2 acres. Designed by the great Dutch landscape architect Piet Oudolf (left), it is work of art which was created in collaboration with Sir Charles and Lady Caroline Legard, owners of Scampston. It opened in 2004 but as gardens take many years to develop it may be approaching its prime. Closer to home here in the U.S., Piet Oudolf’s work may be known to visitors of New York City’s High Line — the former railroad bridge converted to a pedestrian walkway on Manhattan’s west side — as well as Battery Park. Known for favoring certain plantings, and using them frequently, this garden at Scampston Hall can yield a list of of highly rated and professionally tested choices for anchoring a DIY garden. 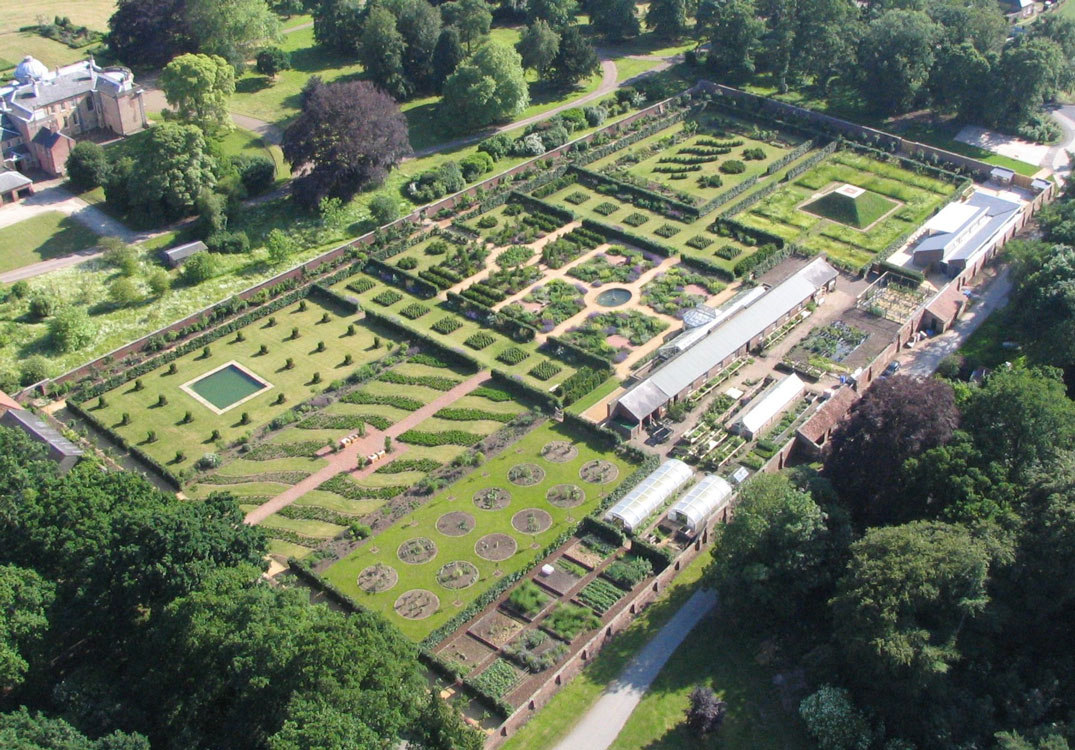 Scampston’s garden is divided into 8 compartments or sections and bordered by brick walls and high hedges. A birdseye view of the garden’s structure almost looks like a rendering more than a photograph. But I do find it easy to recognize each garden section by the shapes of the planted elements. Here is a link to the Scampston website which has a panorama photo of the plan. 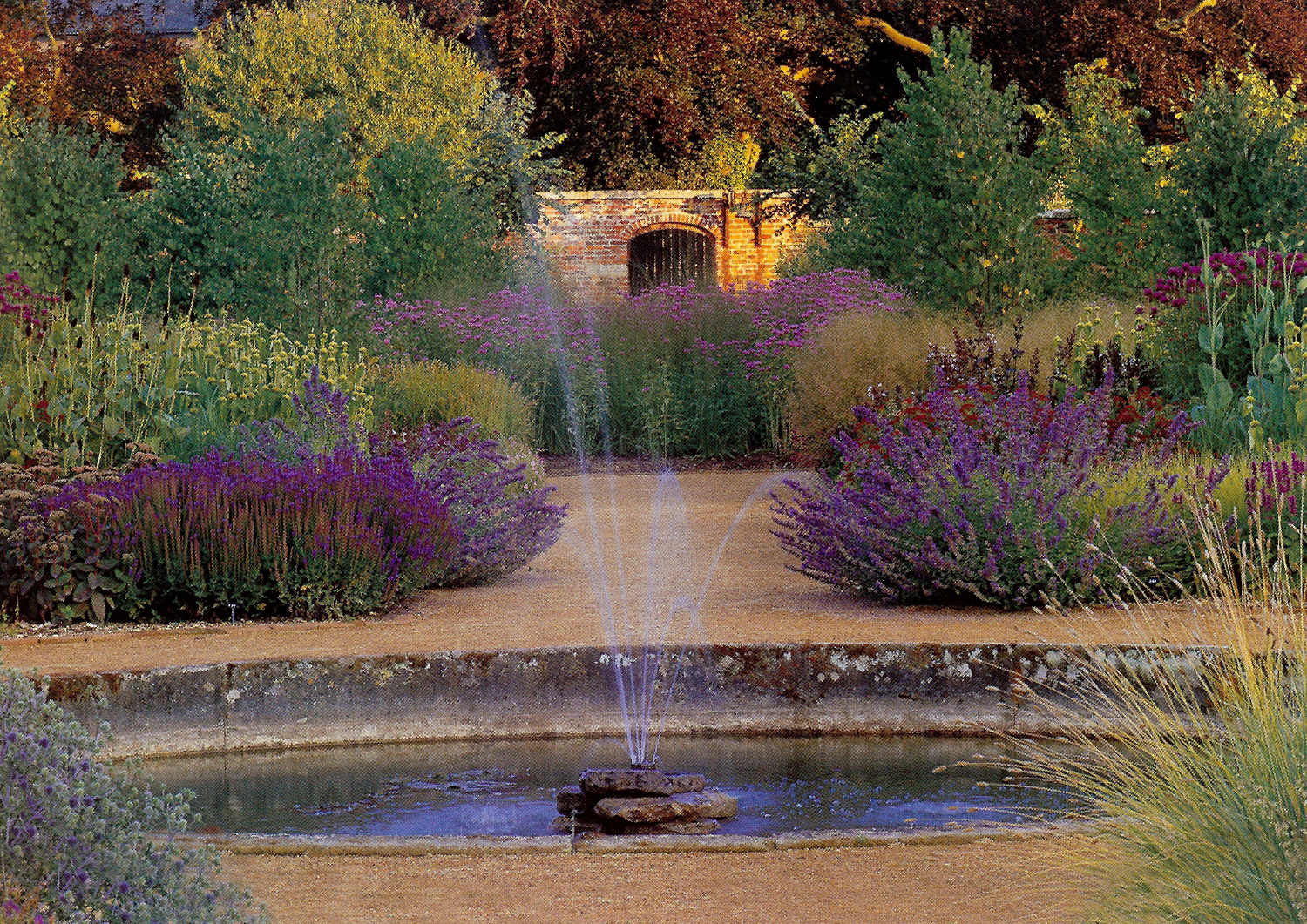 The Perennial Meadow (also top photo) sits at the heart of the garden. There, an oval fountain pool is placed opposite an historically important 1894 glass conservatory which is undergoing renovation. Beyond the lavender flowers are Monarda ‘Pawnee” or bergamot (also called beebalm) with spidery pale lavender flowers. 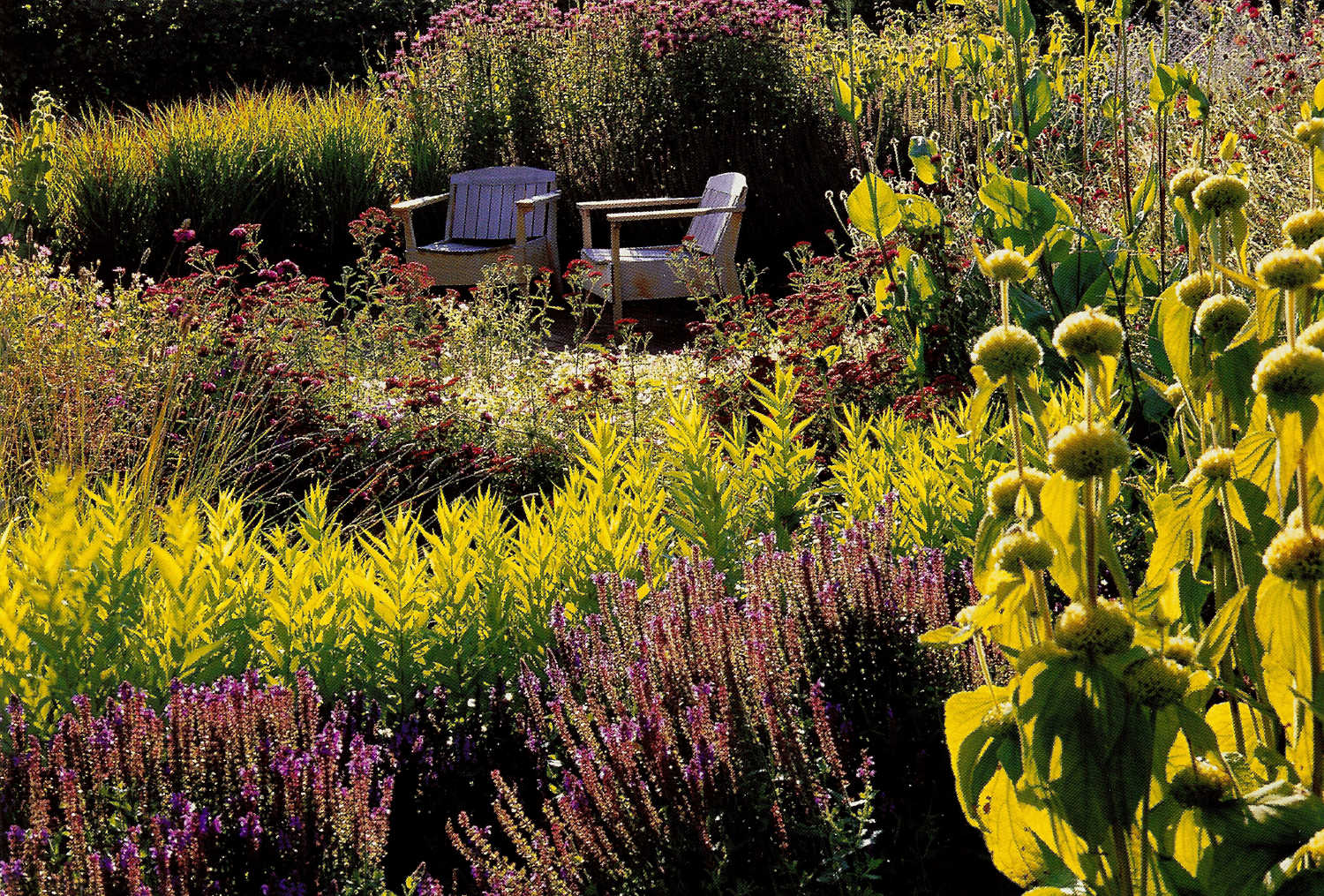 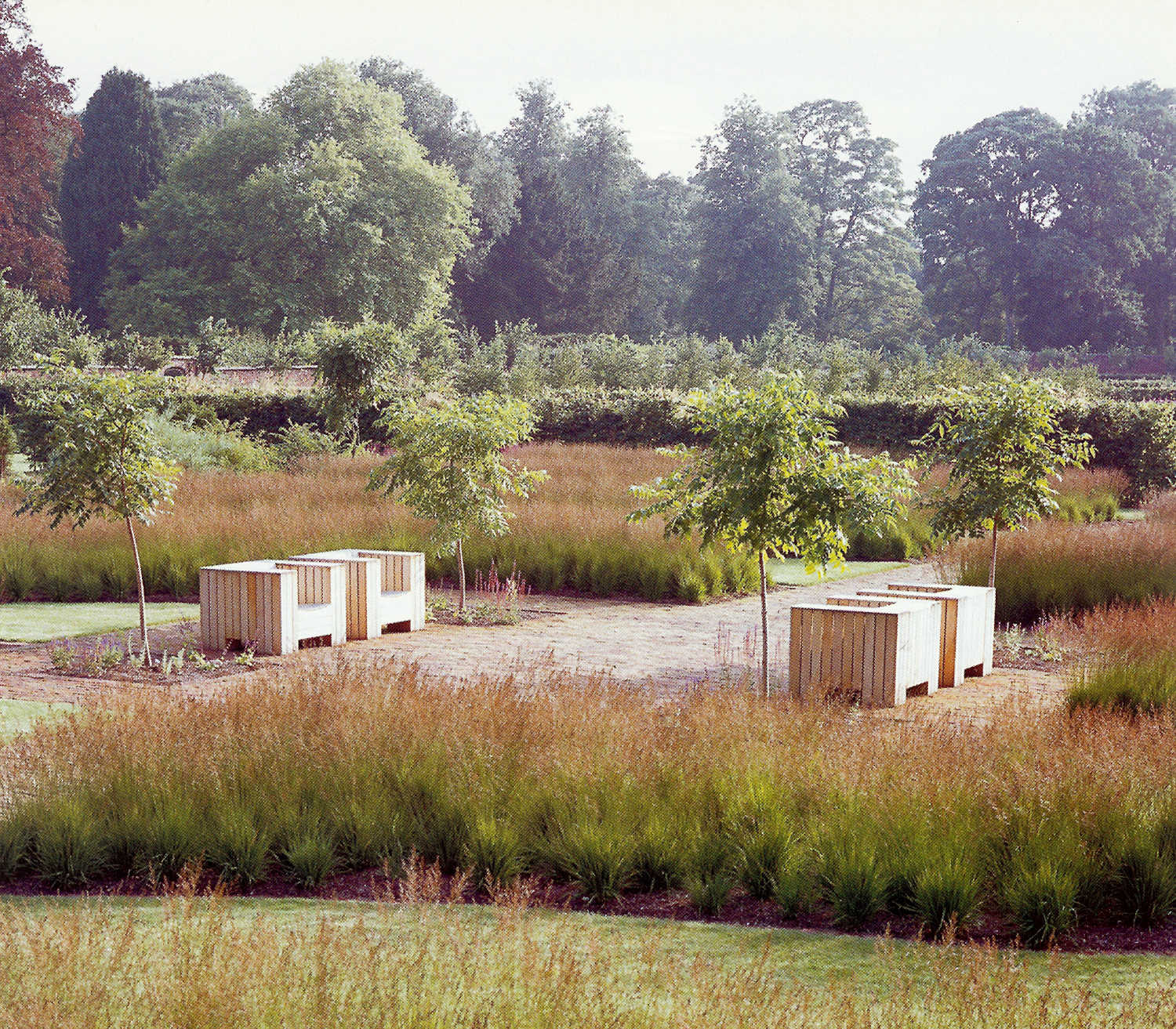 Perhaps the most photographed area of the garden are the undulating beds edged in brick and planted with Molinia caerulea (purple moor grass) which flowers from July to September. Those are arranged  diagonally — like tiger stripes– between strips of lawn. 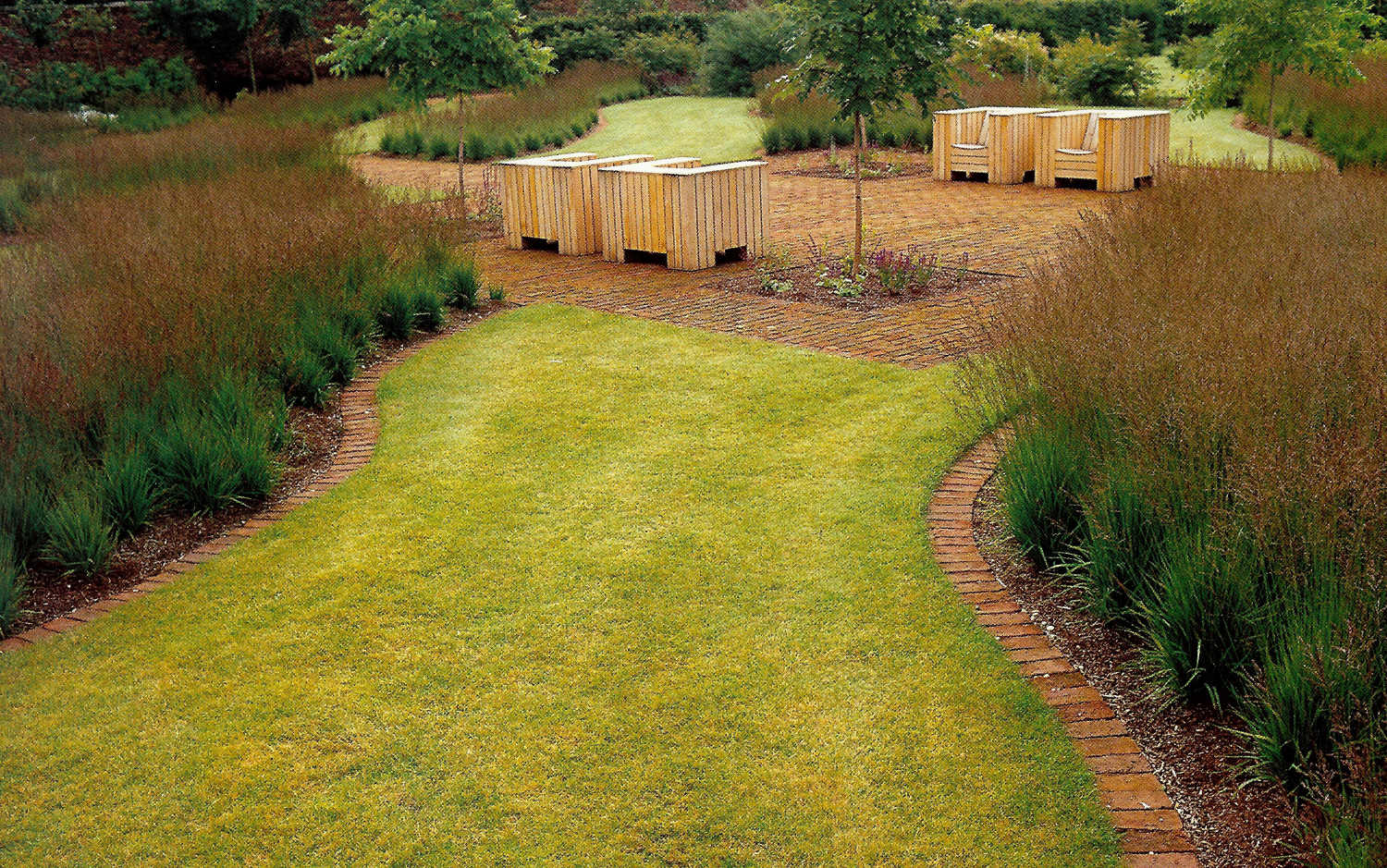 A swatch of lawn approaching a brick-paved seating area shows how native and modern the beds of moor grass look. The seating areas are comprised of facing pairs of wooden plank chairs designed by Piet Hein Eck. Four Phellodendron chinense (Chinese cork trees) punctuate the pavers. As the young ornamental cork trees mature they will provide shade for the chairs. The trees have textured bark for winter interest, yellow flowers in the spring and bright yellow leaves in the fall. 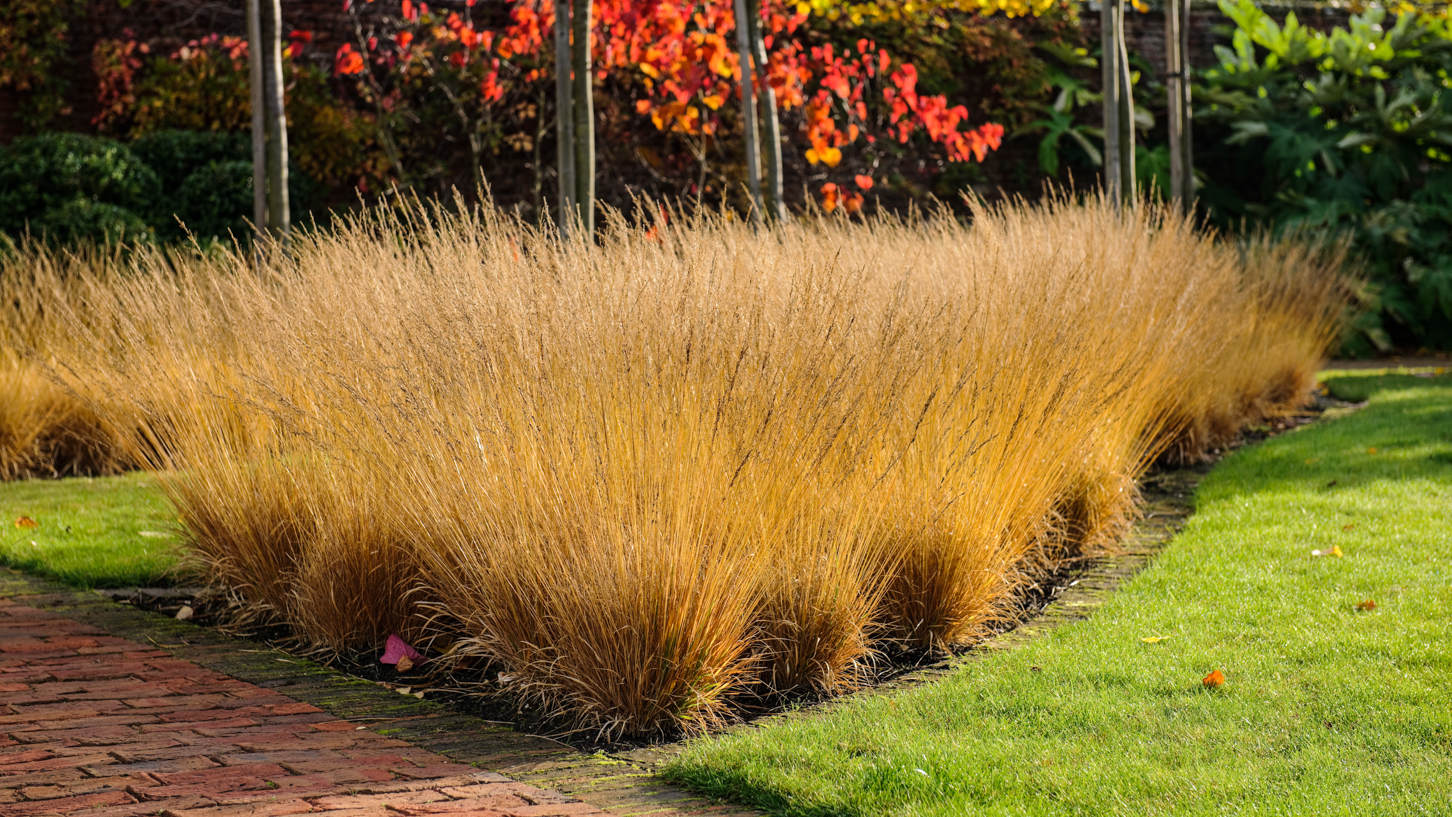 The moor purple grass takes on an amazing yellow hue when summer ends. 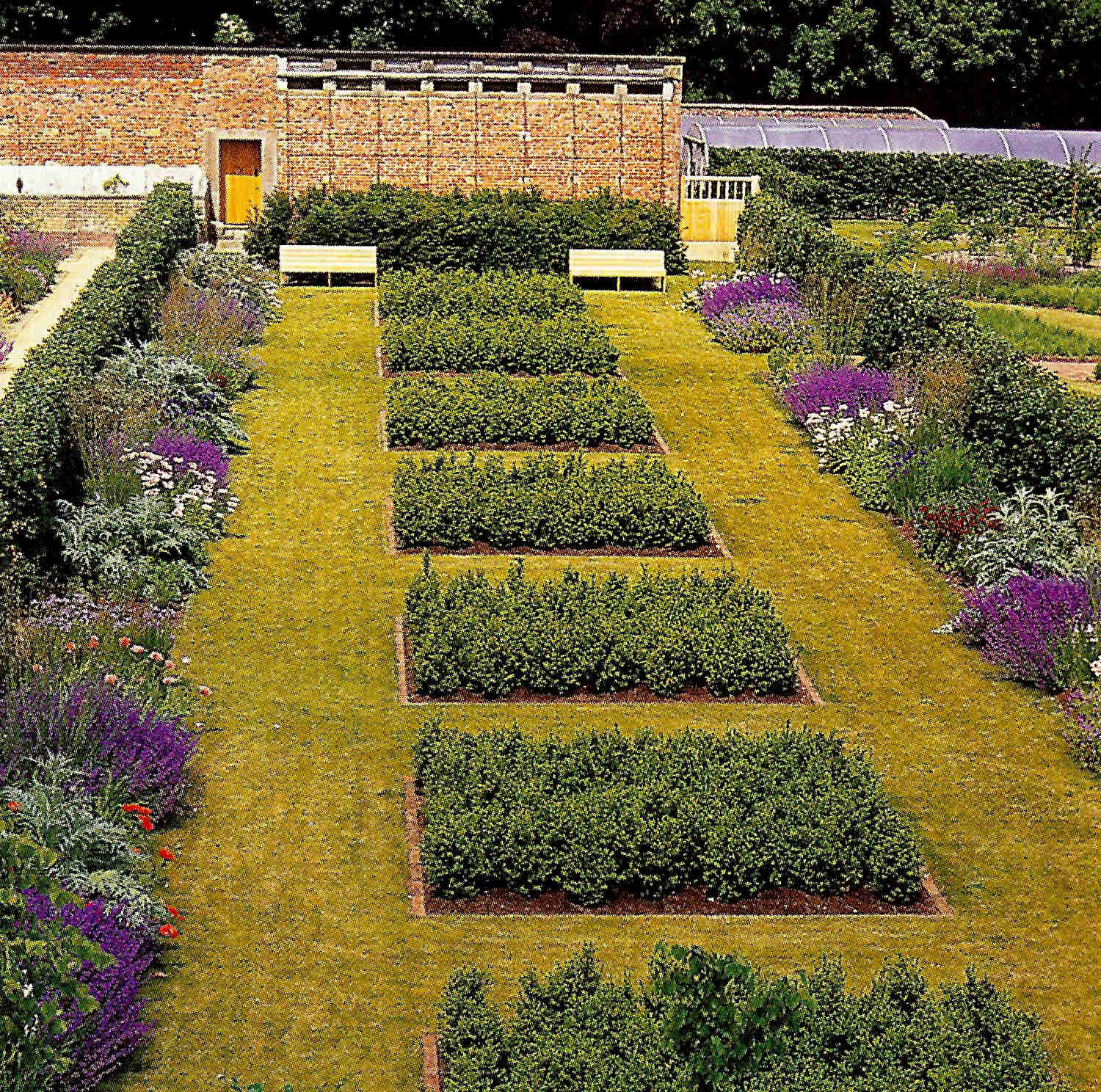 The Spring Box Garden also has a pair of benches placed at the ends so that the entire length and width of the compartment can be seen.  Boxwood squares, surrounded by grass, occupy the center while borders are planted against the defining hedges. 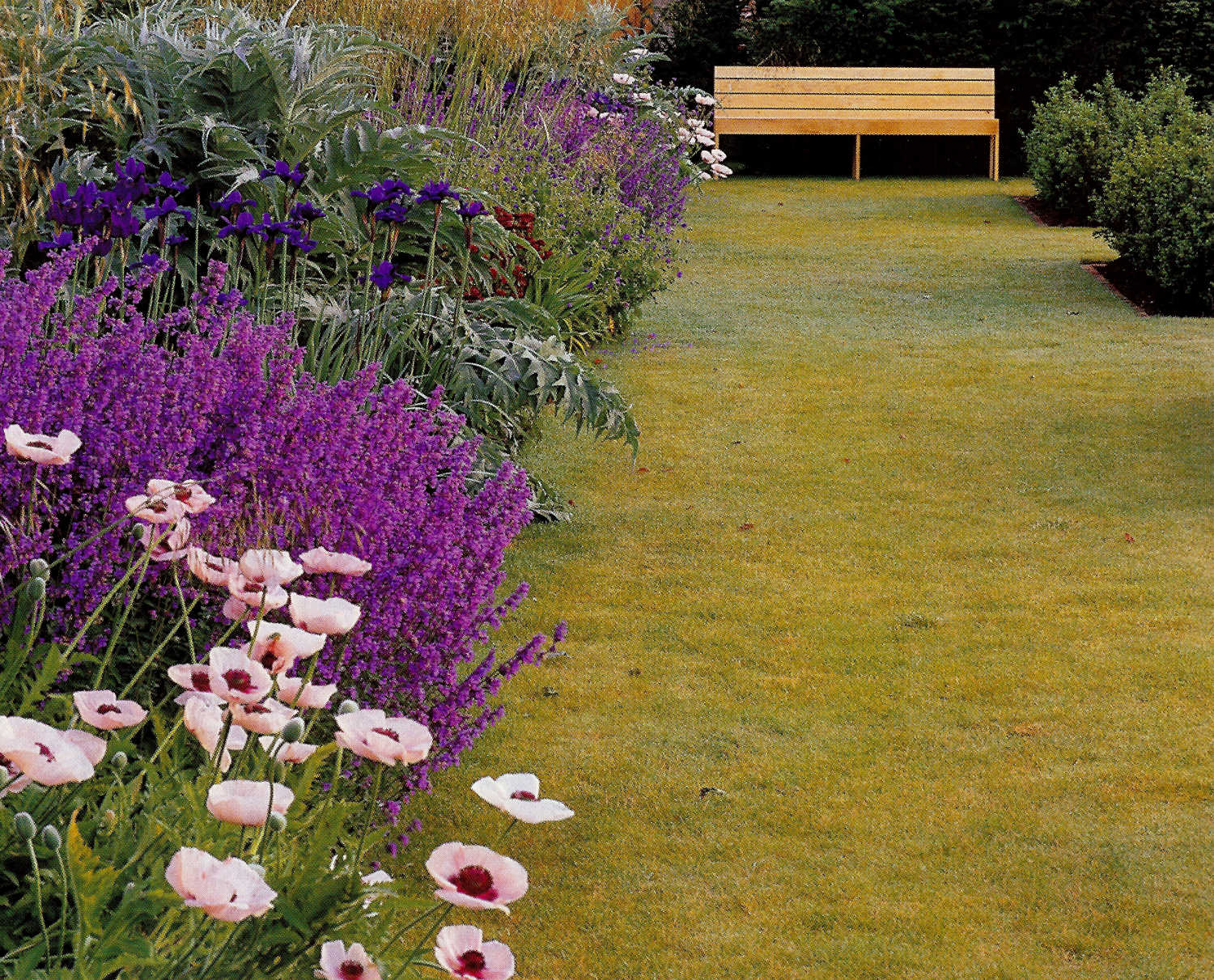 A close up of the Spring box garden borders reveal a riot of salmon-colored oriental poppies, catmint, artichoke thistles and massed Siberian Iris ‘Savoir Faire,’ which can be recognized by their purple blooms.

The richness and vitality of Scampston’s walled garden is merely an appetizer here. Along with a few other walled gardens — and of course a visit to architect Piet Oudolf’s personal garden in Holland —  it ranks high on my bucket list of outdoor adventures.

Copy and Paste the Link to Quick-Share this Post: http://bit.ly/1JgSaJi