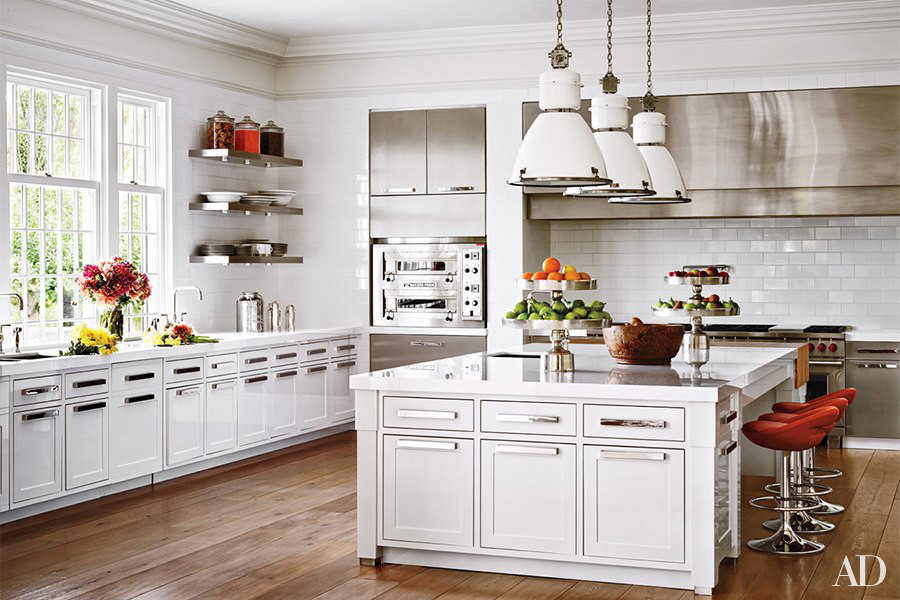 Are celebrity kitchens just like ours? The answer is yes, and why is something of a surprise.

When I saw these four celebrity kitchens in Architectural Digest I thought to myself: they re not especially formal, they have a variety of styles, and they were created according to the needs and wishes of the owners. That’s what makes them just like ours.

Take the all-white kitchen, with stainless steel accents, [top] in the Greenwich, Connecticut home of Mexican pop star Thalia and her Casablanca Records exec husband Tommy Mottola (Mariah Carey’s ex). With two small children and a love of entertaining, the expansive kitchen fits Thalia’s definition of informal luxury — “we cook, we eat, we have music,” the singer said. Mottola has built or redone more than a dozen homes and with the help of Katch I.D. a Brooklyn, NY design studio, he kept things gleamingly neutral. White cabinets by Lifetime Design have a glossy finish. In addition to a big Wolf range set in a long niche are two Baker’s Pride commercial ovens and a pair of sinks fitted with Michel S. Smith faucets from Kallista. Seating at the island adds a pop of red to the room. And the trio of 1930s industrial pendant lights make a stunning centerpiece. 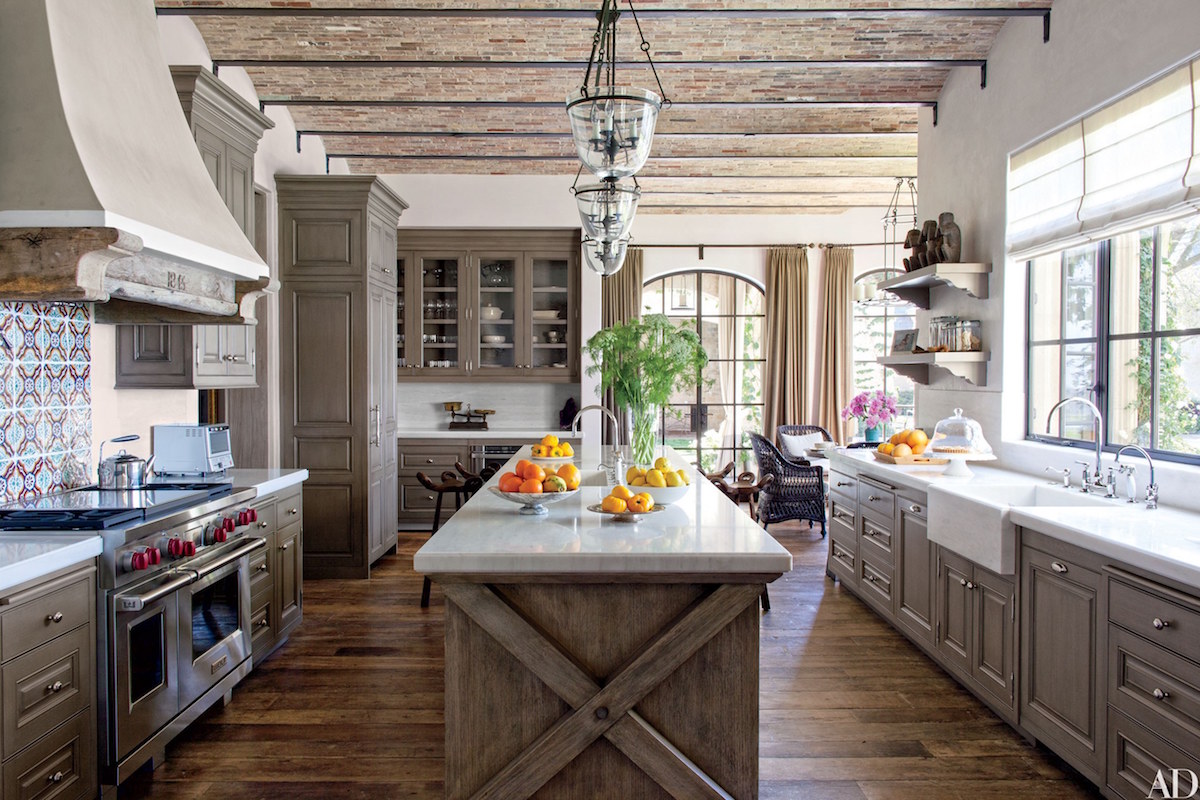 The former Brentwood, California home of New England Patriots Quarterback Tom Brady and his supermodel wife Gisele Bundchen is both eco-friendly and suitable for a family with small children. Even though the house is enormous, has a moat and a micro-farm, the kitchen looks surprisingly normal. Yes, it’s large. But custom alder cabinets have a homey taupe-gray finish that blends well with the overall old-World look which includes a vaulted brick ceiling supported by iron rods. Antique Tunisian tile from Exquisite Surfaces adds color behind the big Wolf range and both counters and the farm sink are marble. “We wanted a comfortable house, not a style statement,” Gisele said. 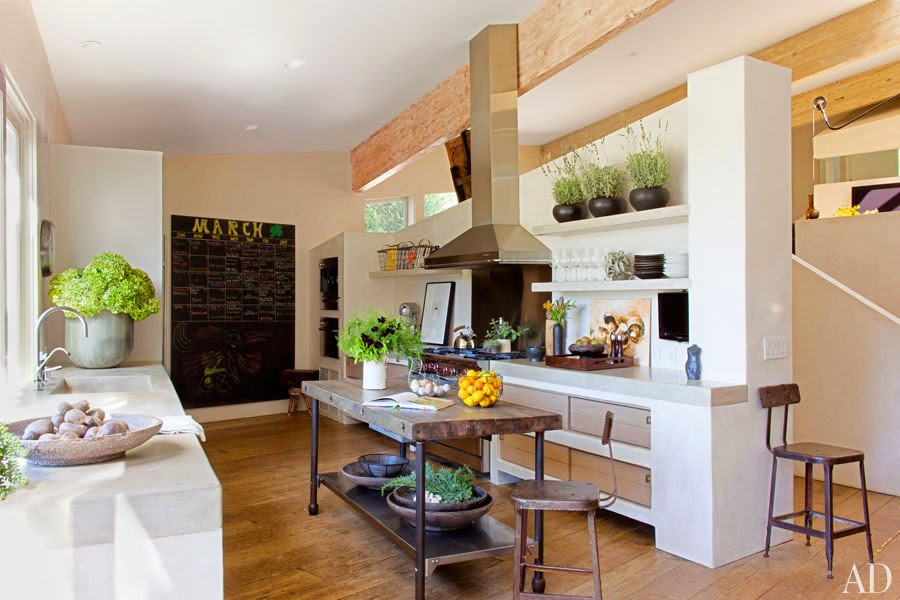 Former Gray’s Anatomy star Patrick Dempsey bought an architecturally serious 1968 Frank Gehry house on 5 acres in Malibu and made it work for his family of five. The galley kitchen has a Wolf range, plus a concrete sink and counters. The freestanding worktable adds a chic industrial edge to the space and a large blackboard on the far wall functions as the family organizer. Floors are made of repurposed scaffolding boards. But in a 5000-square foot house “the kitchen’s pretty small,” Dempsey’s (now estranged) wife Jillian admits. 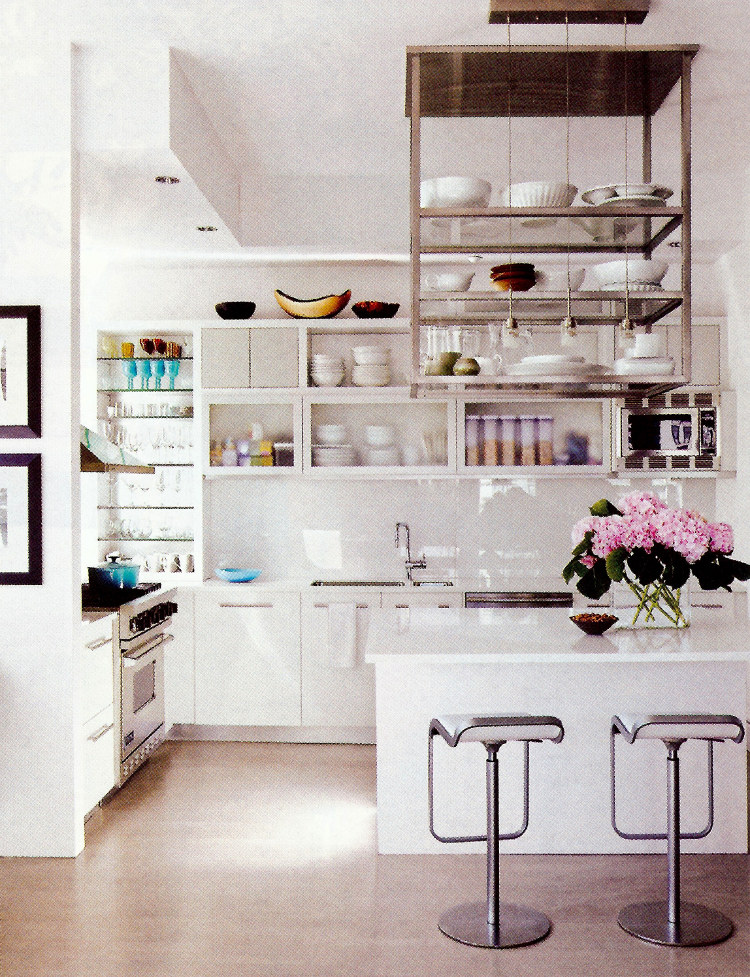 A New York loft, by top designer Vicente Wolf, offers Emmy winner Julianna Margulies and her family a modern, tranquil home base. This sleek kitchen has an island with sculptural steel shelving suspended from the 10-foot high ceiling. White and minimalistic, there are gray maple floors, a Viking range, Blanco sink and modest Grohe faucet. The glass backsplash is reverse-painted white to keep all the surfaces smooth. LEM Piston bar stools, from DWR, fit right into “The Good Wife” star’s definition of “homey, modern and useful,” for the type of space she loves.