You are here: Home / Decor / Switching Up Black and White Stripes 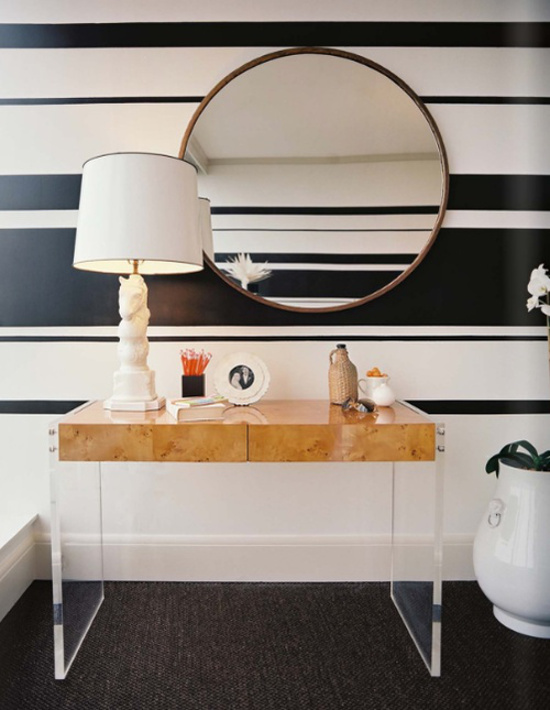 Black and white stripes have myriad variations in home décor and can be used throughout the house.

In my next living space, wherever that may be, I’m going back to modern. But I plan to switch it up with black and white stripes. I don’t have exact plans for using them since that would depend on the rooms and the light. And I don’t know whether I’ll ultimately have the will to go bold or work with one of the many variations.

Most paint brand sites have DIY videos which include ways to paint striped walls. A wall with horizontal stripes of varying widths [top] would no doubt be more complex to produce than alternating stripes of the same width. But it creates a less static look. Plus, horizontal stripes are very effective for making a narrow space appear wider. Here, a round mirror hangs in the center of the busiest section of the striped bands for an eye-level zone that acts like a frame for anything on the wall. The lowest black stripe, at the same height as the lucite and wood-grain console table, acts like a wainscot. It’s complex to reproduce but very clever from a decorating perspective, I think.

A three-tone gray scale composed of medium stripes is worked both vertically and horizontally in this vignette. With such high baseboard molding the “wainscot” or chair rail is raised on the wall. That makes the black-painted chest of drawers look lower than it might actually be and the wall look taller since the vertical stripes start at a rather high point. Stopping the horizontal band of wallpaper with a white stripe creates the illusion of 3-dimensional molding. Similar wallpaper can be sourced from wallpaperdirect.co.uk. Or, a determined DIY person could reproduce this accent wall with paint. It would be time well spent. 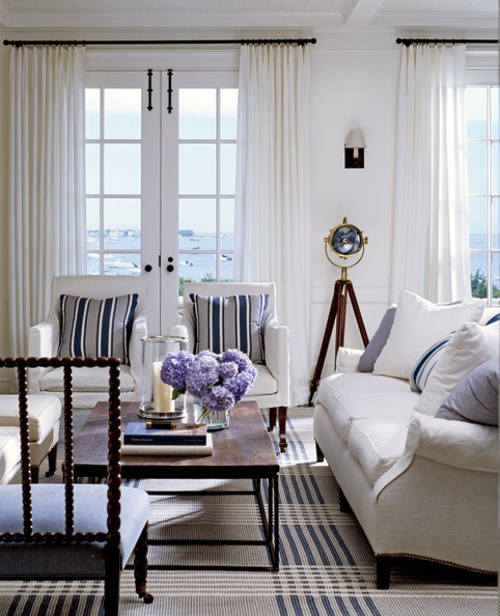 Top New York designer Victoria Hagen used a dark and light striped rug with a gridlike design to create a lively pattern on the floor of a beach house sitting room. Black, white and gray striped pillows pick up the motif. Hagan favors all white rooms and, with the water views in this house, that makes sense. But the interesting carpet keeps the room casual and lifts it out of all the whitewashing we see so often. 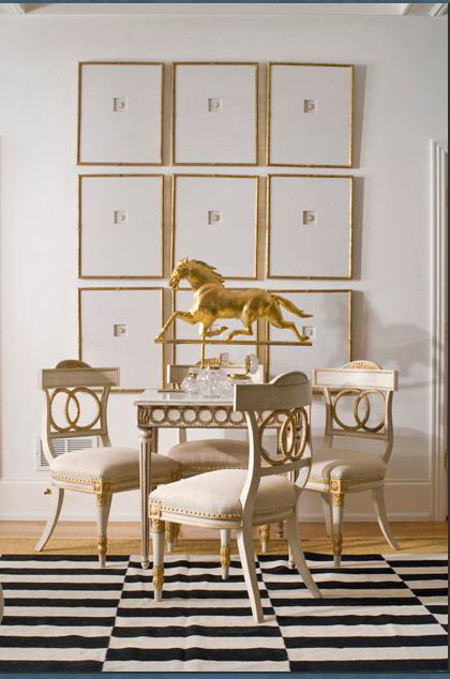 The Madeline Weinrib Atelier Black and White Buche Rug is one of those dhurries that looks pieced. The intense, contemporary pattern adds a modern edge to the gold and white theme of the table, chairs, picture wall and accessories. Vintage or antique white-painted Klismos chairs have elegant parcel gilt decoration, as does the table. The running horse weathervane, mounted as a sculpture, also appears to have been gilded. Picture frames complete the look which, for me, is a welcome blend of two décor worlds. 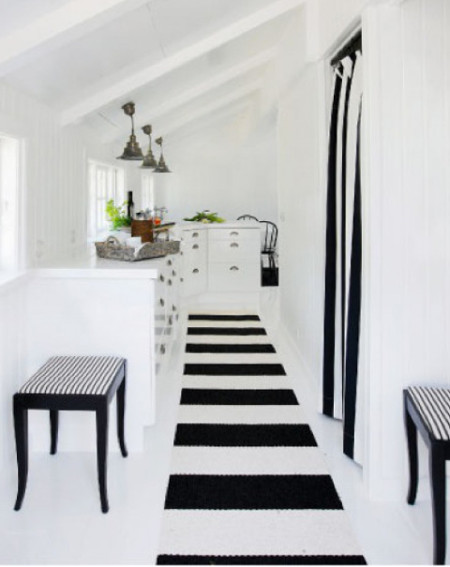 We can thank Scandinavia for all-white décor so often mixed with stripes. Here, the small kitchen of a high-contrast Danish beach house is enlivened by a calculated mix of narrow to wide stripes on the runner, curtain and upholstered benches. Simple, economical and highly effective this use of black and white stripes shows a full understanding of the power and potential of this motif in home décor.