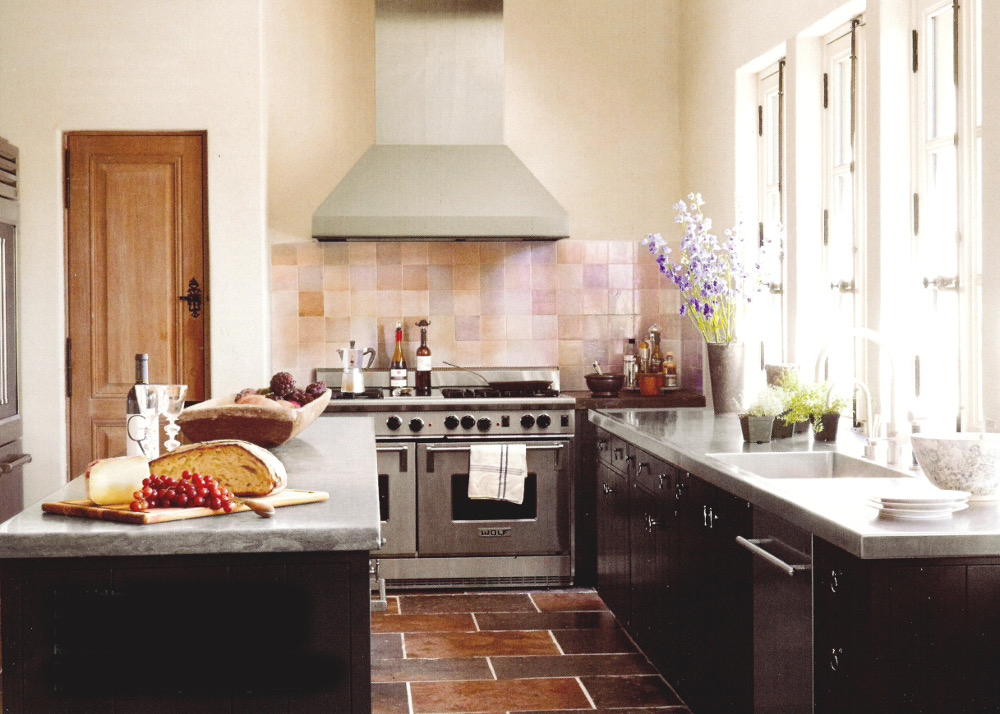 Kitchens are blending into the house more often,  which is why no upper cabinet kitchens feel right.

Leaf through any current home décor magazine and you’re bound to see no upper cabinet kitchens that look very open. That’s because spaces usually occupied shallow upper cabinets have given way to windows, walls with surface treatments such as tile or wood paneling, or walls with open shelving. It’s not often the most notable, or noticed, feature and it’s not restricted to a particular style. These four kitchens, which range from traditional to minimalistic, are very different. Their one common denominator is the absence of upper cabinets.

A suburban New York kitchen [top] illustrates the point very well. Chock full of serious appliances including a double oven Wolf range and pro style Sub Zero, the kitchen has a wall of windows on the sink side, a Moroccan tile backsplash, and stone tile flooring. Black base cabinets more or less disappear. An island offers ample storage and a narrow European-style wood door to the left of the range no doubt leads to a pantry.

When I redid my kitchen ten years ago I chose to have no uppers. Because we lived in the house for nearly a year before construction began, I was able to use the existing kitchen for a time. It had uppers on both sides of the sink and I didn’t like the shallow storage. I didn’t like the window being closed in on each side and we planned to enlarge it. Nor did I like reaching up with heavy stack of plates, and I particularly disliked cabinet doors swinging out towards me at eye level. It was a most unusual choice a decade ago but one I’ve never regretted and always championed. It’s a design bias I live with and embrace wholeheartedly. 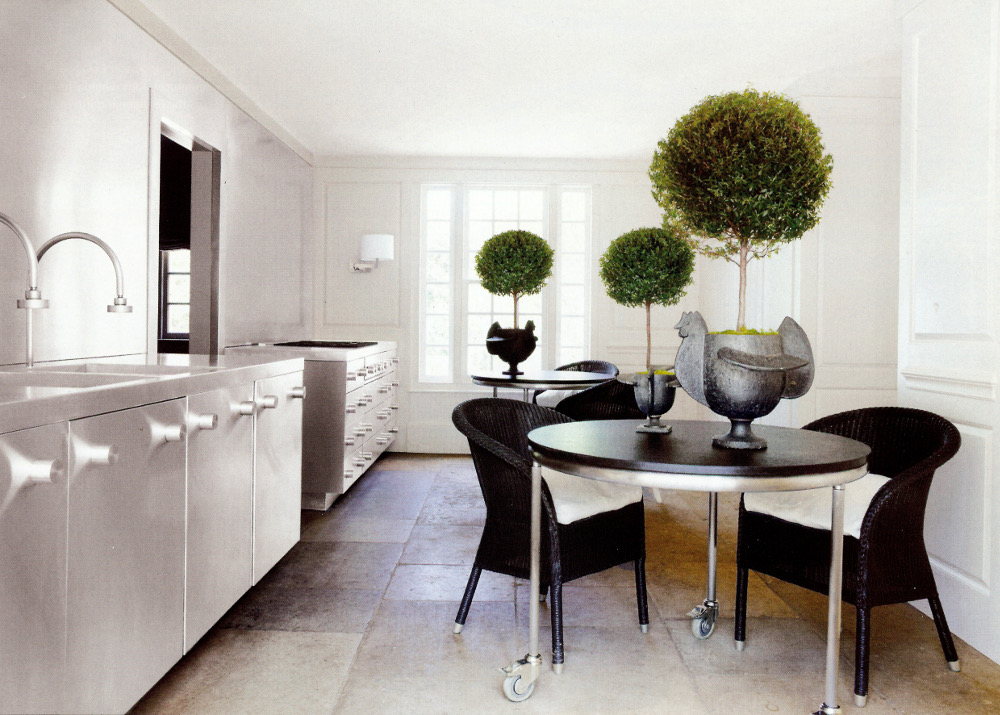 Atlanta interior designer Nancy Braithwaite took the concept several steps further in her home. “I’m not really nuts about kitchens, she stated in an interview with Veranda. What a surprise. In addition to no upper cabinets, the custom cabinets are made to resemble furniture with faucets. The refrigerator and range are hidden behind doors. This is clearly a solution for someone who doesn’t cook and cares more about looks than function. John Minshaw’s Gilded Island kitchen is similar though the purpose of that room was more clearly communicated than Braithwaite’s, which looks a little hotelish (which some might consider a good thing).

In the past, when I’ve participated in no upper cabinet kitchens discussions, the same four questions seem to arise:

1. Where do you store dishes and glassware — traditional u.c. stuff.

2. Isn’t it inconvenient not to have a cabinet above the dishwasher?

3. Won’t everything get very dusty?

4. How can I do this in an earthquake zone where open shelving isn’t a good option?

Here are my replies:

1. I store glassware in pull out pantry shelves and my every day dishes in plate racks which are decorative and functional.

2. I have never understood why it’s convenient to have to step back to open a dishwasher door, then step back again to open a cabinet, then stretch to adjust things in the back of shallow shelves.

3. Nothing gets dusty in my house because it’s used and washed often. I vacuum the plate rack occasionally.

4. In earthquake zones, storage pantries, with larger, heavier doors are a better option than upper cabinets in my opinion. 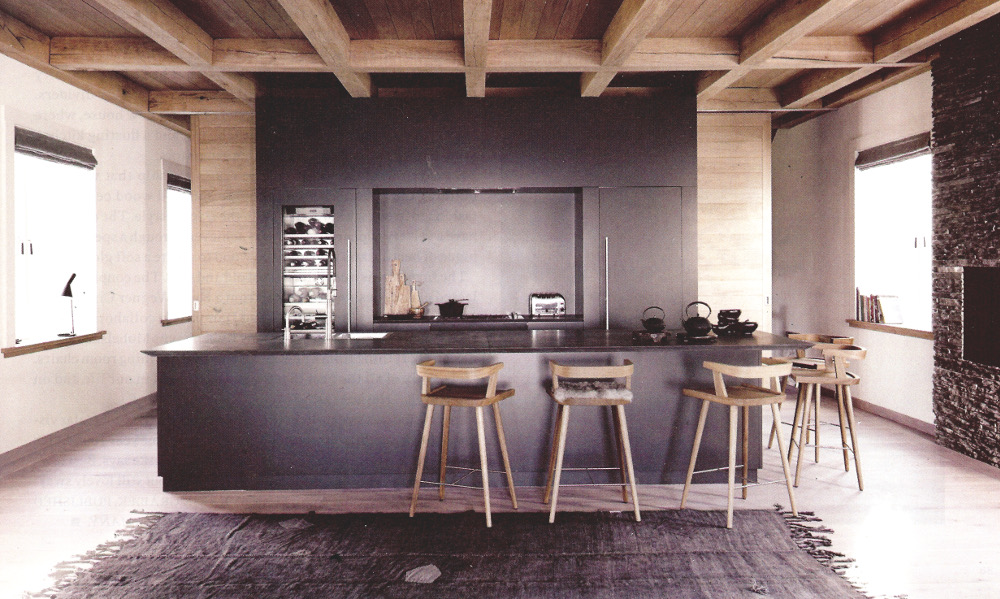 An 8,600 square foot home in Denmark should have massive kitchen storage and perhaps it does. But the owners wanted the openness and stripped down feel of a New York loft. So the kitchen floats on an interior wall with windows on each side as well as a fireplace (right). Food preparation is centralized in a cooking niche flanked by refrigeration on each side. The Dualit toaster, tucked in near the stove, betrays this as a truly functional kitchen despite the sleek lines and dark aura of the Københavns Møbelsnedkeri cabinets. It tells us that the owners eat breakfast at home

1. I have too much stuff to store.

3. My kitchen is too small. I won’t have enough storage space.

At the risk of sounding like “mean gym teacher” here, the answer to the first two is to do some judicious editing, donating, gifting or trashing. The most luxurious kitchens are those with room for everything. This is especially important for small kitchens, with limited storage. Anyone who has too much stuff for a kitchen of any size would be well advised to get rid of what is not often used or what fits easily. Neuroses aside, it’s surprising how good that can feel. 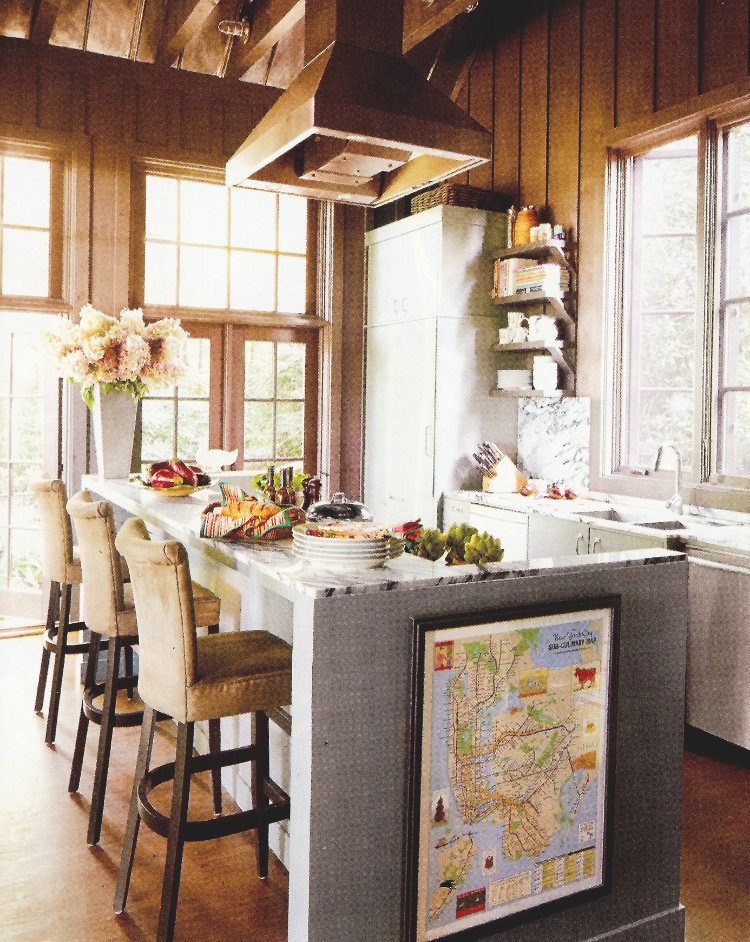 A happy medium between having stuff and keeping things simple is struck nicely in a North Carolina country hideaway kitchen belonging to Atlanta designer John Oetgen.  Here, upper cabinets give way to window walls and French doors and to French oak paneling.  Narrow open shelves hold necessities. And even the paneled integrated Sub Zero in the corner functions like an armoire — with a basket on top. A framed NY subway map is artwork affixed to the unused side of the kitchen island, Mr. Oetgen clearly loves his stuff and isn’t adverse to layering. But there’s an individuality at work in this kitchen, which has a distinct personality and an open character that doesn’t imply any sacrifice because it isn’t a cabinet love fest.

Copy and paste link to quick-share this post: http://bit.ly/1ynVqPz