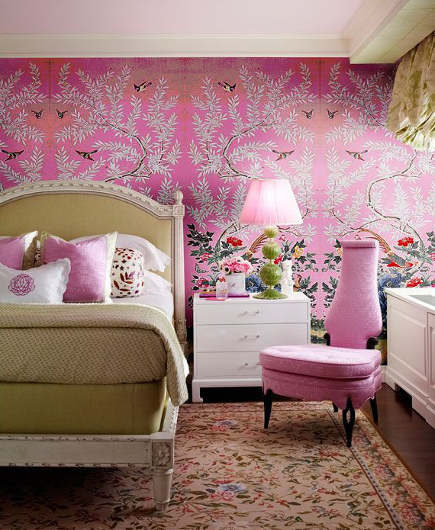 Hot or shocking pink is a color more associated with fashion than home decor.

A high voltage, sometimes neon hue in the blue-red family, hot pink became shocking after fashion designer Elsa Schiaparelli called her signature perfume “Shocking” in 1936 and marketed it as a signature color.

Of course, hot pink has been in the Indian palette for eons and it appears on building exteriors there, as well as other tropical countries. Shocking pink rooms are a different matter. Even for pink lovers it isn’t an especially easy wall color. Children love it so there’s an inclination to promote pink rooms for young girls or reserve it for a “mom cave.” Yet the stunning shocking pink walls in a New York bedroom [above] date back to the early 19th century when China’s Canton school produced hand painted wallpapers. These vibrant museum quality panels were collected by antique wallpaper dealer Carolle Thibaut-Pomerantz. They look surprisingly modern and “they bring originality and great elegance to a room,” Thibaut-Pomerantz said in Veranda. On an accent wall and with a white ceiling, the color doesn’t seem overwhelming — even though it’s reinforced by the upholstery on the Syrie Maugham chair and throw pillows on the bed. I was surprised to see the celery-color bed and shade and the muddy looking rug in the room but they do calm things down since the paper also contains strong blues and greens. 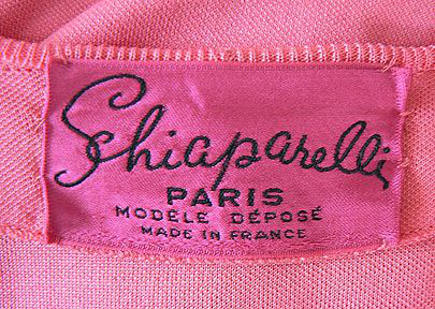 I was amused to find an original Schiaparelli label. And while that dates from before World War II, shocking pink didn’t make it into the Crayola box until 1972 — just a year before Schiaparelli’s death. 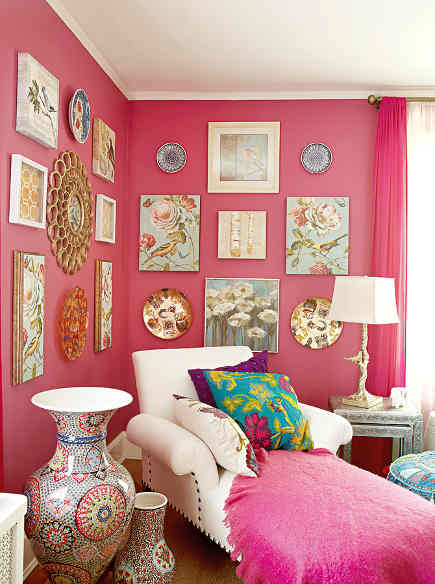 Even when shocking pink is interrupted by light colored art and objects, it retains its elemental power. This sitting area, staged by Elain Griffin for a Homegoods “mom cave” event in 2010, pushes it to the power of three — walls, curtains and throw. 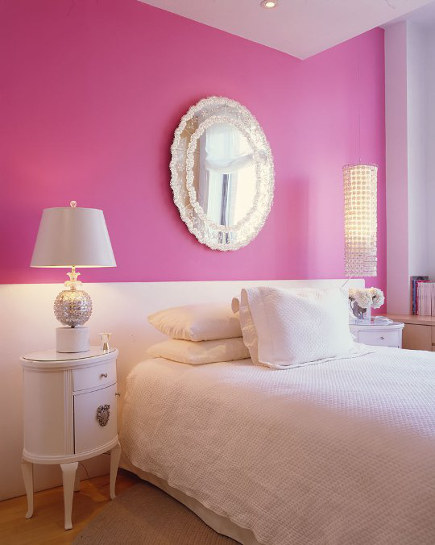 In a New York pied à terre, designer Benjamin Noriega-Ortiz created a girls’ room in a very clever way and with surprisingly little furniture. There isn’t even a headboard. Instead, Noriega-Ortiz used a white-painted wainscot-style panel to create a bright white band across the bottom of the wall. That functions like a low headboard. The ceiling is a blush white, as if the walls were reflected there. High voltage as well as glossy, the wall color sets off the white smartly. And when time comes to paint over the pink, the mood in the room will change dramatically in less than an hour, even if the Venetian mirror and mid-Century pendant and table lamp remain. 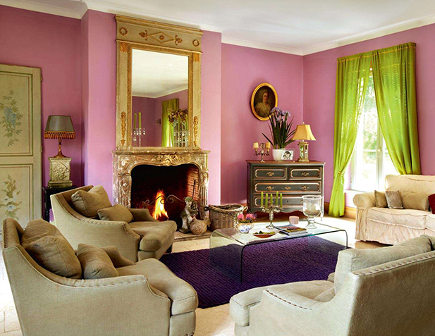 A renovated house in Brittany has a shocking pink living room that,  at 750 square feet, is exceptionally large. With the high windows, it feels less girly than dramatic. Creams and golds of the overmantel and the painted screen don’t compete with the pink and upholstered furniture is equally neutral. The big surprise, for me, is the acid green curtains  — the same green used in an adjacent room. That green almost upstages the pink. “Depth of tone adds strength and personality to a room,’ says the owner and designer Heather Depuis. No doubt Schiaparelli would agree.

Copy and paste link to quick-share this post:  http://bit.ly/1rCUxwr