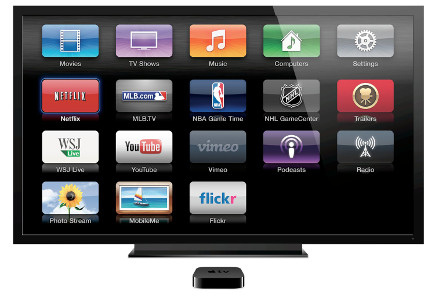 People may already know about Apple TV but I didn’t.

For a long time, I really didn’t understand what an alternate system like Apple TV or Roku does, or why it might be worth the investment. The only “streaming” I knew about centered on my kitchen sink faucet. But two of my friends know everything. One is my pal Tracy, who told me about her Apple TV and urged me to get one. Tracy is super smart and always right. I took her suggestion and now I want to pass along my experience here because, after six months, we cannot imagine life without our Apple TV. 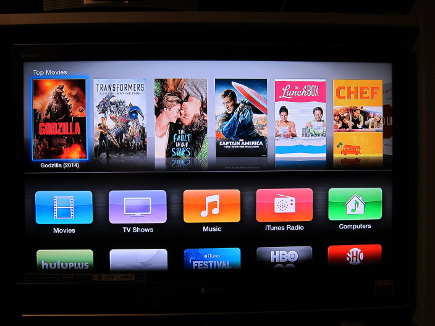 Mr. AM and I are avid TV consumers but over time we became bored with reruns and haven’t been happy with the “on demand” movie selection our cable company provides. Instead, we watch something on the Apple almost every night. We always went to the movies when we lived in the city but here in the country that’s not as convenient, especially especially during winter months. I love that we can rent good hit movies from iTunes and even run movie nights when the family visits without shlepping out to rent or return anything from Redbox.

Best of all, Mr. AM gets his beloved Red Sox games live on the Apple since one of their networks is Major League Baseball (mlb.com). In the past, his subscription only allowed him to watch the games on his computer. But sitting at his desk is nowhere near as comfortable as the couch! 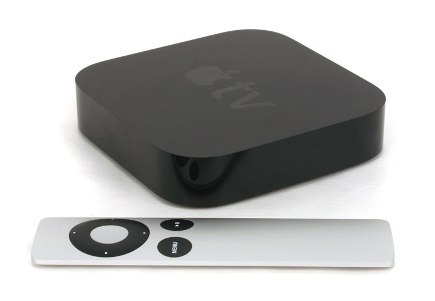 Apple TV works off WiFi. Like many people these days, we already pay for cable TV which comes bundled with extra high-speed internet (we both work on computers at home), our modem and WiFi router. We already had the basics in place. The device is  about the size of a Kraft’s singles cheese package and was a bit of an investment at $99. It connects to our flat screen with an HDMI cable. I found two of those in a bag in the basement where we store extra computer accessories. They must have come with the TVs. Who knew? Otherwise, that’s about $15. Once the cable is installed and the box plugged in, set up is relatively easy. Especially if someone who has one helps you out.

Tracy had volunteered her sweet fiancé, Brent, to set up our Apple when they visited in May. But when our daughter Rebecca brought one of her little ones to see us, it took her about 15 minutes to get it up and running.

In addition to WiFi there are only four other things needed to get started.

#1 If you don’t already have an iTunes account for your phone, computer or tablet, set one up. Then have that username and password accessible.

#2 Create a different user name and password for Apple TV specifically, and have that accessible. (I wrote them both down in my password book so I don’t forget or mix them up).

#3 Find the original remote control that came with the TV.

#4 Check out the little AppleTV remote that comes with the box [above]. There are only three buttons and once you learn what each one does, it’s very easy to use. (“Menu” button turns it on. The large button has an outer ring used for navigation right, left, up and down. That’s needed to spell out the username and password. Push the center of that large button to “select.” The small button to the right of the Menu button is used to stop or backtrack.) 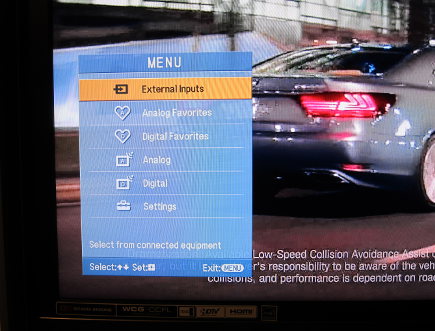 The trickiest thing to understand is the role of the original remote control for the TV. That’s needed to install the Apple and to switch back and forth between the cable system and the Apple system. That original TV remote has a Menu button which brings up the “External Inputs” option. 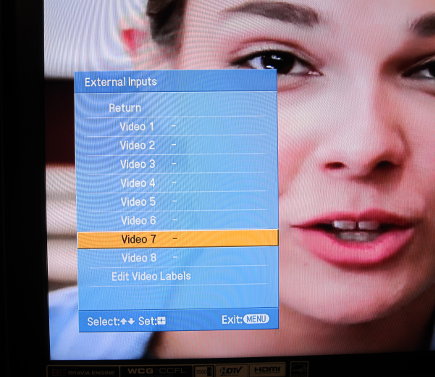 Selecting External Inputs brings up a numbered list. Our cable operates on Video 4. The Apple TV installed itself on Video 7. When I want to change from regular cable to Apple, I use the original remote to go from Video 4 to Video 7 — and the reverse. 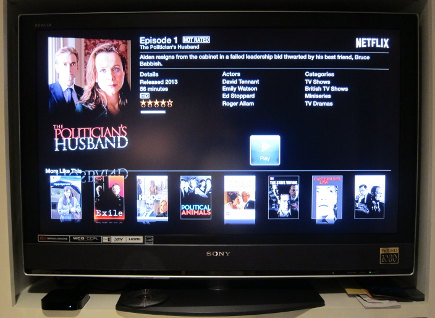 So what do I like and recommend? Netflix tops my list. For $7 a month, is one of the best buys around. First we watched “House of Cards” (both seasons) — another Tracy tout. We pretty much binge-watched the first two seasons of “Longmire” (my sister’s suggestion) — a well-written modern day western sheriff drama. We really enjoyed a corny Scottish series called “Monarch of the Glen,” and assorted British mysteries, dramas and weepies. Have you seen “The Politicians Husband,” with Emily Watson and David Tennant? It’s a three-part political thriller and another of my favorites so far. We also were able to pick up the Agatha Christie “Poirot” and “Miss Marple” episodes we hadn’t seen on PBS. And we’ve hardly made a dent in the library. One night I watched Sky News live from England — I always enjoy another perspective. There’s a good deal more to explore as time goes on, including Hulu and PBS.com. This little slice of Apple tastes better every day.

Copy and paste link to quick-share this post: http://bit.ly/ZuS261