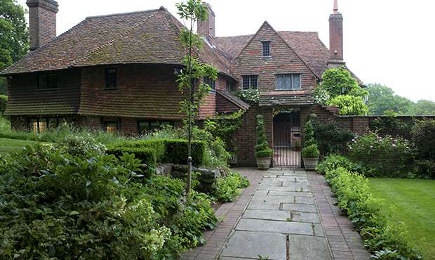 An historic British home, Long Barn Gardens, has been taken on by a new generation.

From 1915 to 1930, British diplomat Harold Nicolson and his wife, the poet and writer Vita Sackville-West, lived on an eight acre property in Sevenoaks Weald, Kent, known as Long Barn. Sackville-West, who may be the most famous and revered gardener of the 20th century, also wrote an influential weekly gardening column for The Observer newspaper at the time.

But when it came to creating gardens, the couple worked as a team. And while they are best known for the monumental garden at Sissinghurst Castle, it was at Long Barn gardens where their distinctive style was developed. Nicolson’s contribution was architectural structure which included box-hedged rooms, yew columns, walled terraces and parterres. Sackville-West oversaw the artistic planting where colors flourished in profusion and roses gained special favor. The couple’s friend Sir Edwin Luytens, the great British architect, contributed what is called the Dutch garden and even today one of his iconic benches remains in sitù. Over the years, Long Barn was visited by celebrity friends including Douglas Fairbanks and Charlie Chaplin and the estate was rented to American aviator Charles Lindbergh and his novelist wife Anne Morrow Lindbergh at some point after kidnapping and murder of their infant son in New Jersey. It is a historic, and storied, place.

In 2007, Long Barn was purchased by a young couple, Rebecca and Lars Lemonius, who had been eyeing the property as neighbors. Fast forward seven years.  ‘It is an evolving garden, even after all this time. There is no attempt to preserve the garden in aspic and plant only what would have been planted in the 1920s. That wouldn’t feel right,” Rebecca Lemonius explained to a writer from Period Living magazine, where it was first featured.

As I have often said, I am not a gardener. I know little of exterior planning or planting. However, I am always captivated by hedged rooms, which have become a particular passion.  And although I find parterres a bit static, I am fascinated by the idea that they are living architecture capable of growing and escaping their forms.

One section of the Long Barn house [top] dates back to the 14th century. As the story goes, the “barn” was added to the original structure sometime in the 19th, giving the property its name. Today, there is a blue-stone and brick walkway leading up to the house with abundant planting on each side. A pair of  corkscrew-shaped topiaries flank the iron gate. 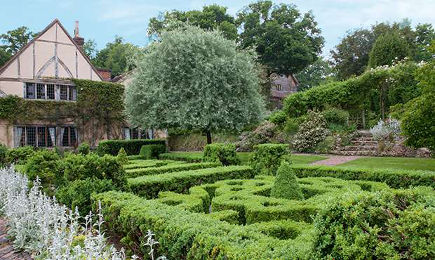 A parterre composed of an architectural maze sits directly behind the house. I would love to see a view of this from the second floor. (The garden can be toured by appointment.) 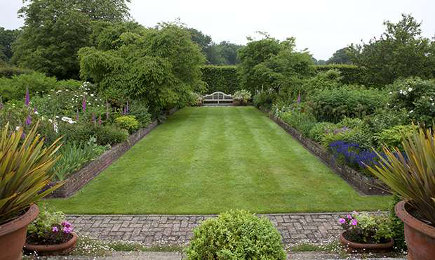 Bordered by intricately patterned brick walkways on two sides and abundantly planted beds contained by low brick walls, the manicured lawn creates an intimate arena. The teak Luytens bench — which may be the best known piece of garden furniture today — sits at one end of the long vista with a hedge wall behind it. 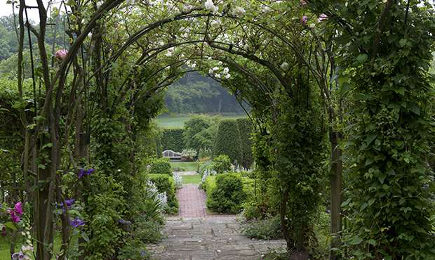 Climbing roses cover an archway over the stairs leading down to the Luytens bench. Peering through this living tunnel feels so dramatic, even in a photograph. 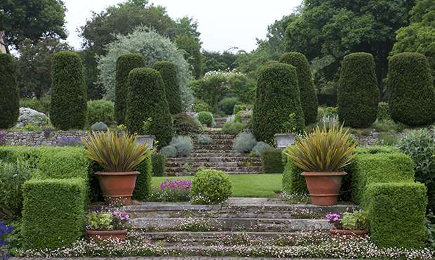 Stone steps and low walls create a succession of terraces which are bordered by sculpted hedges and ice-cream-bar shaped yews. I love the play of color between the deep green of the yews, the lighter green of the hedges, and the silvery-blue hue of globular plants on the stairs. 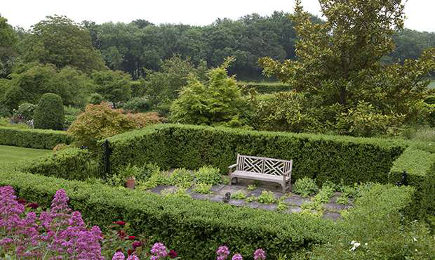 Hedges, planted in a rectangle, create an outdoor room with a paved patio and another iconic garden bench, this one in the Chippendale style. 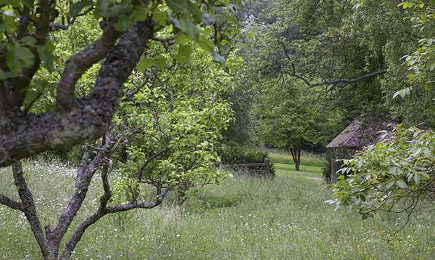 Four-acres of meadow at Long Barn gardens are meant to retain a wild, natural look. 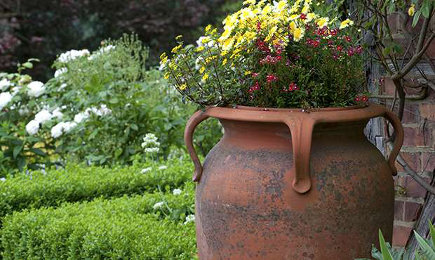 Chrysanthemums in a terracotta plater provide color. Beyond, there are white roses planted in hedged beds. Vita Sackville-West pioneered the idea of a garden with a color theme. White roses also create a “moonlight” garden which would mean that the square planted beds are visible at night — a kind of visual poetry.

Copy and paste link to quick-share this post:  http://bit.ly/1nnFJ0M