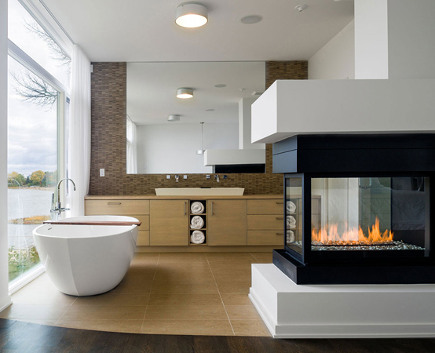 Technology is changing many things in our homes. That also extends to the fireplace.

Ours is an old-fashioned, hand-built wood burning hearth. But I’m fascinated by sleek, contemporary gas fireplaces I’ve seen on TV — notably on ABC’s Castle — and in magazines. These come in a variety of shapes and widths and can be placed in non-traditional spaces — like the center of a wall. Most impressive is a contemporary bathroom fireplace installed between the bedroom and bath, or in a wall over a bathtub. Because the bathroom remains such an unusual location, a fireplace will upstage even the most dramatic tub every time.

I’m in love with this three-sided fireplace [top] in a master bath with stupendous views of a river in Ottawa. With the bedroom and bath open to each other the fireplace serves both rooms. The glass enclosure would radiate a fair amount of heat, which is a bonus when the tub this set close to a wall of windows, especially in Canada. Imagine soaking in the tub with a steaming mug of tea on the tray, with a fire blazing and snow swirling outside.

Contemporary or minimalist fireplaces most often are glass boxes or open hearths. Generally, they are fueled by natural gas or propane and set into stone or tile since they give off a considerable amount of heat. Some require a chimney to vent, while the newer non-vented fireplaces do not. More versatile in terms of their placement, but more controversial, a fireplace that does not vent requires ample air flow to operate. Some builders won’t use them because things can get tricky when a house that has been insulated and air sealed. What’s undeniable is that modern fireplaces sold by specialty manufacturers like sparkfires are stunning. 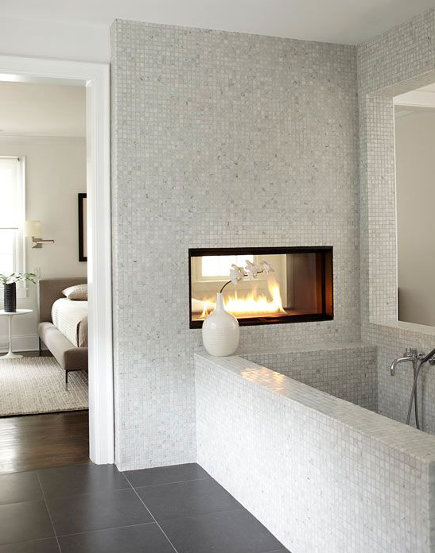 Set in a wall between the master bedroom and bath, this double-sided fireplace, has a modest scale. However, it’s large enough to add visual warmth to icy looking 1-inch mosaic dot tile that many architects favor. This appears to be a non-vented fireplace more or less at waist height in the wall. It’s a multi-tasker, too, since it will keep the bathtub area warm while also adding a little heat and a good deal of atmosphere in the bedroom. I’m not sure how comfortable it would be to climb in and out of this deep tub covered with scratchy tile, or whether water from the hand spray shower might fly through the opening behind the tub. Just saying. 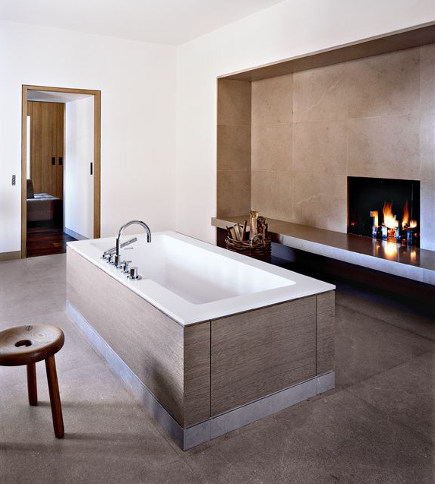 Consider how  unexpected this contemporary master bath would be in a 17th-century French château. But French interior designer Pierre Yovanovitch believes in renovation and went all out with a marble floor and Dornbracht fittings. The star of the room, though, is his wood-burning fireplace set into a marble panel. Wouldn’t you agree the fireplace wall upstages even the pedigreed, paneled Agape tub? While the wooden bath stool is 1953 Carl Malmsten piece, it seems a bit ascetic in such a hard-edged bath. A comfortable chair would be a wonderful place to relax in front of the fire. Old houses, which previously had no central heat, often have wood burning bathroom fireplaces. Those tend to have a very different look than his one. I’ve saved some examples for a future post. 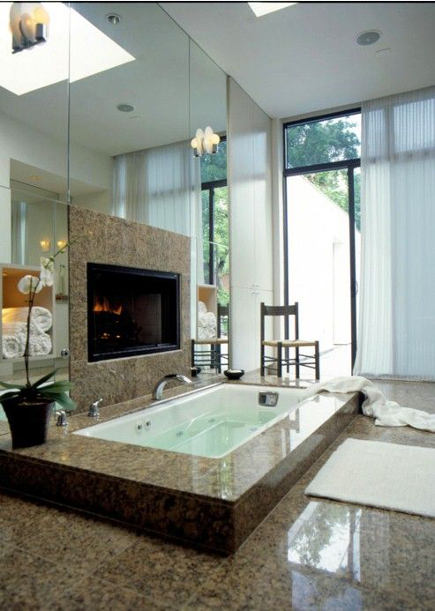 A mammoth modern fireplace is installed in a wall above an equally huge tub. Even with glass and mirrored walls, the fireplace is the focal point. For me, it’s installed a bit high, like an altar with the jetted tub centered below. I’m not loving all the polished brown granite which looks a bit kitchen-y. What’s more, polished stone is incredibly slippery — both on the very wide low tub deck and on the floor. Perhaps is why someone wisely thought to accessorize with bath sheets and an absorbent rug. 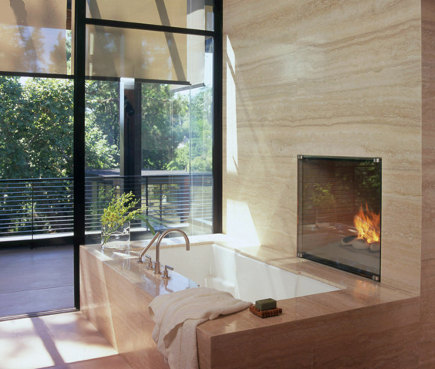 A latte-colored travertine bathroom by L.A. architect William Hefner also feature a gas fireplace set in the wall over the side of the tub. Clearly, that arrangement works. Set back enough to create warm for a bather or two, while still being out of the way, the glass screen echoes the windows and evokes the luxury of a professional spa.

If I were building or renovating, I would be sorely tempted to include a modern bathroom fireplace and I’d do the necessary research before buying. Pros, cons and cautions are best explained by reading installation and operating manuals since these are not without challenges, especially non vented styles. Making sure a fireplace will be 100 percent safe and compliant with local building codes is paramount. This would not be a DIY job for most people but the results can be fabulous.

Copy and paste link to quick-share this post:  http://bit.ly/1qo3RDS