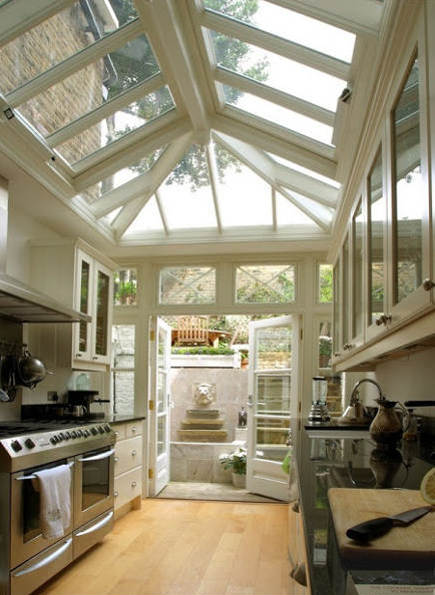 Conservatory kitchens can range from traditional to ultra modern — with or without glass roofs.

More popular in Europe than in the U.S., conservatories are glass walled and ceilinged structures added onto a house as a garden or sun room.  They are synonymous with greenhouse rooms or sun porches. These days, with formality on the way out, the concept of a conservatory is easily applied to the kitchen and with spectacular results. This kitchen style is a BOGO — designed like a greenhouse by the way the ceiling and windows are configured. One lovely example is the English-inspired Gothic Revival Kitchen which has a conservatory-dining space and kitchen in an open-plan room. Some have full on glass walls and roofs while others boast extensive window walls designed to bring in extraordinary natural light and outdoor views.

The conservatory kitchen [top] is added on to a town house. Essentially, this is a  glass-roof galley. The window wall with French doors leads out to a walled yard. But basically, this is a traditional black and white kitchen (white cabinets; black counters)  that, but for the ceiling would not be remarkable. And it might well be a dark place to cook. It’s interesting to note that the flooring is blond wood which will amber with exposure to sunlight but not fade.

Natural light is a desirable element in any house. But a room with a glass ceiling and walls might not be to everyone’s taste. We’ve seen too much Dark Kitchen Drama to think otherwise. As someone who craves light and views, a glass ceiling  seems heavenly to me, especially in the kitchen. Still, there are a special set of structural and functional considerations for any conservatory kitchen. Flooring, heating, light control, materials and maintenance all must be seriously planned with seasonal temperatures, climate and the room’s orientation in mind — particularly if the kitchen is south or west-facing. 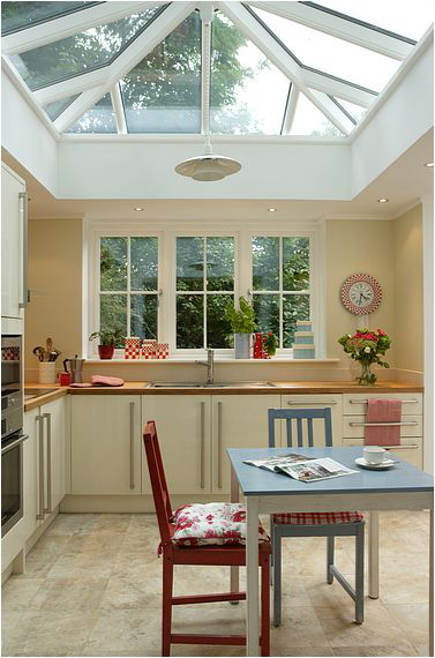 The modest proportions of a modern cottage kitchen don’t lessen the impact of the roof. So while a conservatory is essentially a 19th century notion, it marries well with a contemporary family kitchen. I adore this one with its vintage red and white checkerboard and light blue accents. 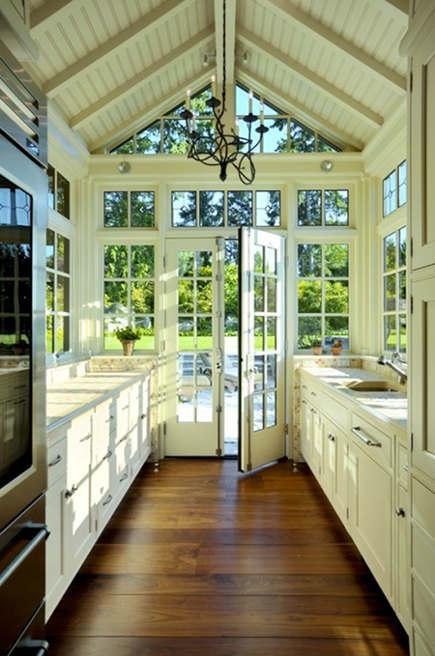 Windows on three sides give this galley kitchen the feel of a conservatory and open it up to outside views. Both the sink wall (right) and the work counter adjacent to the glass-front Sub Zero (left) have the benefit of counter to ceiling windows. The glass wall at the end — also with French doors leading to a patio — doesn’t close off an inch of natural light since there are even windows in the pediment between the support beam and the roof. The ceiling here presents the dividing line between an actual conservatory structure and an adaptation. However, the bead board-clad beamed ceiling retains a Victorian feeling and blends well with all the windows. It also serves as a background for the charming black wrought iron chandelier. 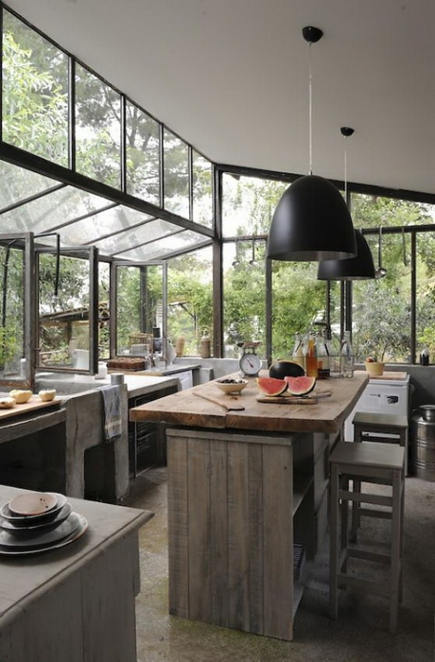 I’ve seen this kitchen described as industrial, which I feel is a misinterpretation. For me it’s wabi sabi and tropical-primitive. Let me state my case for that. First, the cabinets are thoroughly rustic. Some and appear somewhat primitively made from weathered woods. Others, on the sink wall, are different depths and appear to have concrete counters. The sink is concrete and, on close examination, the faucet is much like a shower head — mounted very high and through the window as if a pipe was simply routed through. There’s a tin storage can over in the right corner and ladles appear to be hanging on the far wall, which suggests a wok stove to me. Here, too, the ceiling is solid and finished and its upward slope sets up the greenhouse windows and bump out. While a hybrid conservatory kitchen it feels   authentic in its place (which I’m guessing is south Asia). 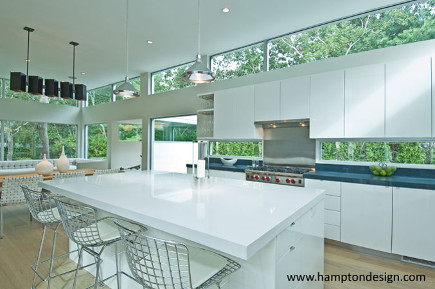 The Hamptons, at the tip of New York’s storied Long Island, are known for grand houses at the beach. This huge minimalist kitchen makes the most of the woodsy landscape with its all-around clerestory (ceiling level) windows and window backsplash. There are also picture windows in the sitting area beyond the dining table. This is a thoroughly modern, multi-purpose room –let’s call it a modernist conservatory kitchen. To achieve the look, however, cabinets are so radically neutralized in favor of the views the Wolf range almost looks out of place. And while it must be a joy to perch on one of the Bertoia stools and drink a latte at the counter on a summer morning  — or sip Chardonnay at sunset when the light begins to change — it must be even more dramatic when the windows all go black at night. 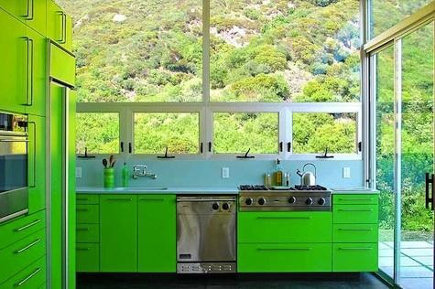 A house situated in Malibu’s Las Flores Canyon inspired architect Bruce Bolander to go a little psychedelic with mid-century style fluorescent green cabinets and sky blue Corian counters.  “The color was influenced by the color of the new growth on the chaparral that surrounds the house,” he architect told a magazine. As la di dah as this may sound, the combination of jaw-dropping color and transparent walls are unforgettable. For anyone wishing to know about more mundane aspects of the fixtures, the paneled refrigerator (left) is by GE Monogram, the range top and dishwasher are Viking, and Chicago Faucets is the source for the wall-mounted vintage mixer that looks exactly like my Grandma Rose’s faucet in the 1960s.

Copy and paste link to quick-share this post:  http://bit.ly/1q2vRww