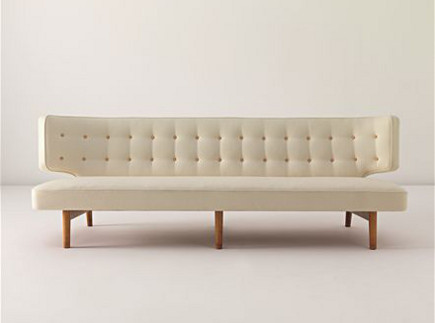 Tufting has been used on modern furniture since the early 20th century.

When it comes to sofas, most anything goes with tufting. While it’s usually somewhat flat – in keeping with a streamlined silhouette — many tufted modern sofas are heavily padded and deeply buttoned. Early on, mid-century modern furniture showed restraint when it came to buttons and folds. One of the most elegant examples of this style I’ve found is the white beauty [top] designed in 1942 by Danish architect Vilhelm Lauritzen for the headquarters of the national Danish broadcasting company in Copenhagen (currently occupied by the Royal Danish Academy of Music). Based on the Greek klismos form with a gently curved and tufted back, it has a beech frame, wool upholstery and leather-covered buttons. Something of a masterpiece, it sold at a Phillips Gallery Important Nordic Design auction in London, 2011 for about $120,000. 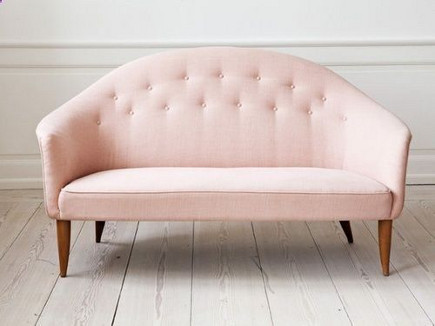 A sweet, pink Swedish sofa from the 1960s looks as fresh today as it must have back during the Mad Men era. Another vintage gem, this “Lilla Paradiset” settee has been reupholstered but the teak legs and frame are original. A modern version is made by Gubi, in Denmark. 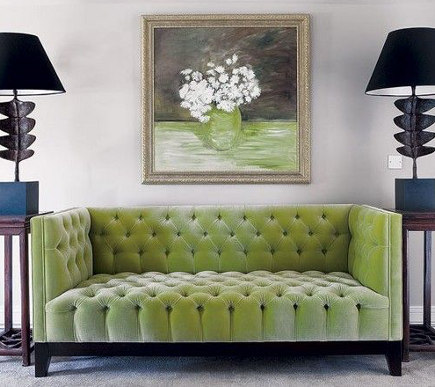 Squared off tufties work well in transitional interiors. Essentially a slimmed down, chiseled Chesterfield on an ebonized frame, this apple-green sofa clearly is no thoroughbred but still remains impressive and versatile. 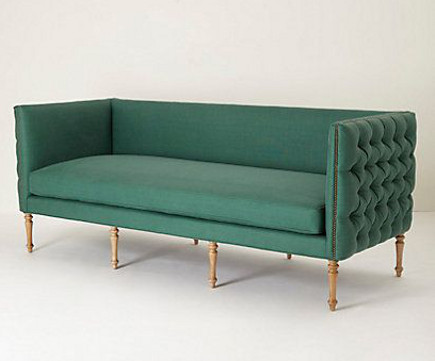 A similar geometric silhouette has inside-out tufting all around the back and sides. Clearly designed for floating furniture plans where the back is often seen first, nobody should put this baby in the corner. 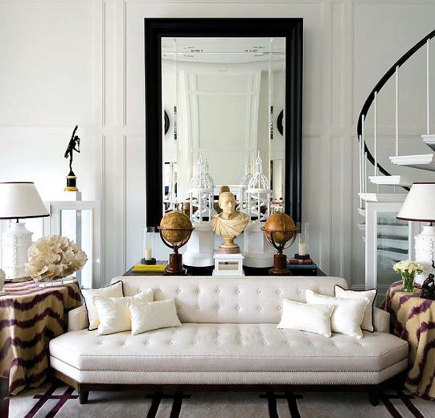 I think of this as a Hollywood Regency version of tufted modern sofas. Almost a banquette, the arms are short, the buttoned back is flat and low, and the extended seat has diagonal corners. Nailheads give the seat the illusion of having a cushion while the sides lend unusual angled elegance. All about shape, the buttons are merely embellishment. 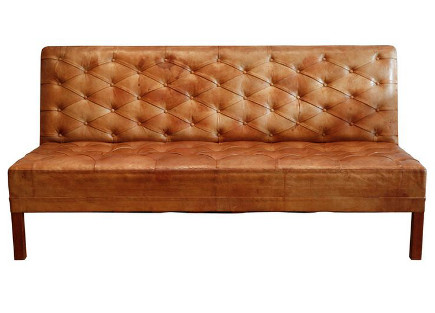 My affinity for Scandinavian furniture of every era is always with me though I’ve no idea why. Something about the aesthetic – from Gustavian to Danish modern seems to call to me. I pick it out every time, hence a 1930s Danish banquette with original leather horizontally tufted on the back and seat.  This sofa by Kaare Klint, the so-called father of Danish Modern furniture, also has a Cuban mahogany frame. 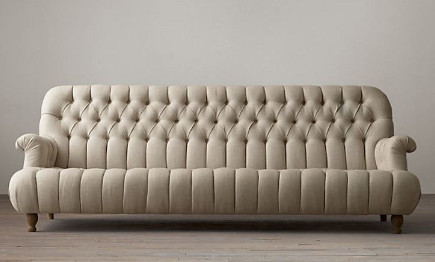 The folks at Restoration Hardware have created a dramatic large-scale tufted modern sofa with an imposingly buttoned back and a seat that reminds me somehow of horse carriage upholstery. For me, it’s instantly masculine. Imagine this in black leather and you’d immediately think “steam punk” which goes to show how designers can get away with almost anything cloaked in natural linen. 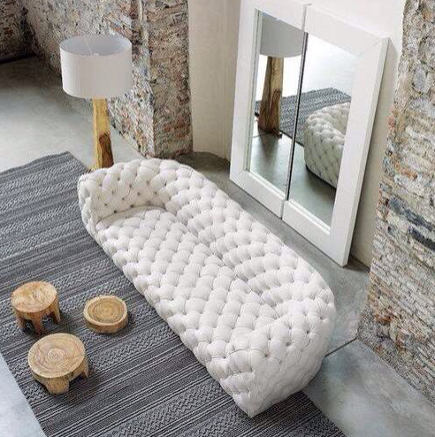 If a Chesterfield were reduced it to it’s most modern extreme it would no doubt look like this Italian Chester Moon sofa by Baxter. No child could resist bouncing on this and no doubt it would stand up well since the arms are way thicker than the walls of my house. I must admit in a slate-colored modernist apartment this cushy confection would be a smash. 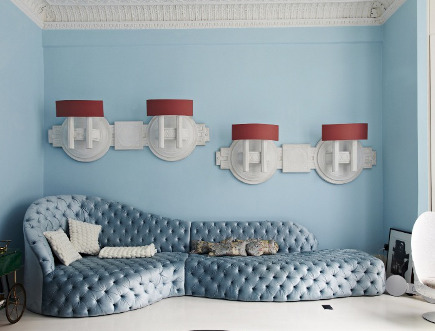 Fanciful and slightly outrageous, the undulating powder-blue sectional in Danielle Moudaber’s London living room are her own design upholstered in aqua velvet from Wemyss’ Kentia Collection. All-over tufting gives the piece an exotic feminine aspect – not unlike harem pants. 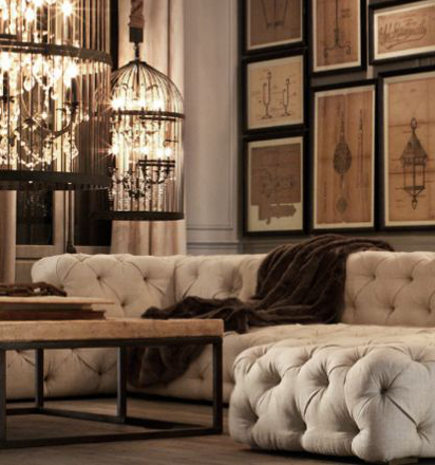 Large scale, squared off, and tailored for a loft, Restoration Hardware’s Soho button-tufted sectional is low, plushly padded and deep enough to double as a guest bed. Furniture that multi-tasks so easily definitely feels modern.

Copy and paste link to quick-share this post: http://bit.ly/1kJja4x