You are here: Home / Decor / Rooms / Daughter of All Plateracks 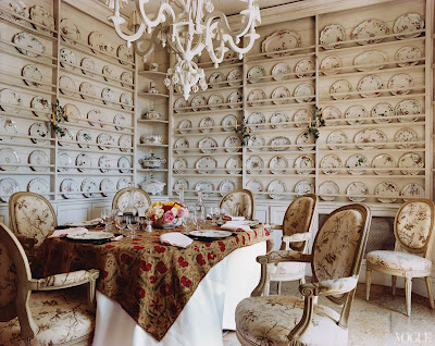 Doubling up on a plate rack wall filled with china makes an impressive display, even when it’s all white.

Last year, during our kitchen week, I posted a photo of a kitchen that was one of the inspirations for my own. I had stumbled across the Porcelain Kitchen at Thureholm Castle in Trosa, Sweden (1747) in a book called “Country Houses of Sweden,” by Barbara and Rene Stoeltie (Taschen), which includes images of rooms from many of Sweden’s most famous 18th and 19th century manor houses.  Once glimpse of the amazing gigantic plate racks and I knew I wanted a Swedish hutch with a plate rack on top in my own kitchen. The Thurholm kitchen is pictured in my Mother of All Plateracks post. Given it’s age, it may be just that and one day to see it in person, not just virtually.

Meanwhile, another colossal plate rack is worth a mention, due to both its size and the stunning effect it has given the breakfast room in a French country farmhouse. Even bigger than it’s Swedish cousin, this is plate rack wall — two in fact — in a Provence farm house  belonging to arts collector and bridge expert Janet de Botton. Photos of the house appeared in Vogue some years ago, included the plate rack which covers two walls and includes a corner niche for the display of tureens and covered dishes. It’s a fabulous feature when you have an extensive collection of 18th century Marseilles faïence pottery to display, even when it’s all white on white. Given the scale I see no reason not to consider the French idea of a plate rack wall as the Daughter of all Plate racks. The younger daughter.

Copy and paste link to quick-share this post: http://bit.ly/1fCTOsG