An exhibition at the Salone del Mobile in Milan visits famous architects in their homes. Part I.

It’s not often world famous architects give us a glimpse into their own houses. But at the April 2014 Salone del Mobile, in Milan, Italy, eight acclaimed architects share images of their personal spaces in a special exhibition simply called Where Architects Live. The annual international home furnishings and fixtures show is a beacon for the design world. In a separate pavilion, photographs celebrating the homes of well known architects was a highlight of the show.

Zaha Hadid.  Although she lives in London [top], Ms. Hadid often describes herself as a “gypsy.” The Iraqi-born architect travels widely, from Rabat to Tokyo to New Haven, Connecticut where she is a visiting professor of Architectural Design at Yale University.

Known for her futuristic designs, inspired by the early 20th century Russian Suprematist artist and architect El Lissitsky, it’s not surprising to see all white walls punctuated by bold primary colors in the artwork.

Large windows overlooking a private terrace allow light to come into the flat. 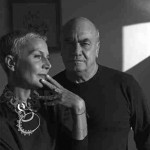 The prize-winning couple has done main projects in cities from Shenzhen, China to New York, where they designed the Armani Fifth Avenue in 2009. In their living room [above], an amazing antique ceiling and limestone fireplace stand in contrast to iconic modern furniture which is seems to be as much sculpture as it is seating.

The dining room has original Jean Prouvé furniture and we adore the grand dining room bookcase wall which allows the room to double as work space if required.

The couple’s simply, and sparely, furnished bedroom allows the elaborate ceilings throughout the house to provide much of the decoration.

Daniel Libeskind.If this name sounds familiar to many Americans it’s because the Polish-born architect was selected as the master planner for the World Trade Center redevelopment in lower Manhattan, at Ground Zero. He lives in a loft [above] furnished with black LC3 Grand Modele armchairs, in Lower Manhattan’s Tribeca neighborhood. 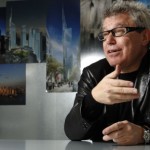 Now an American citizen, Libeskind is often recognized by his trademark black-rimmed glasses and the leather jackets he favors. Originally establishing his practice in Berlin in 1989, where he built the Jewish Museum, he moved to New York in 2003. He also has designed Europe’s largest retail and health center in Bern, Switzerland as well as MGM Mirage’s retail development on the Las Vegas strip.

At home, the energy of life in downtown New York City is just outside his window. But Libeskind travels constantly as his work on residential buildings has taken him everywhere from São Paulo, Brazil to Covington, Kentucky.

A trained musician as well as an artist, Libeskind is an avid reader and collects wonderful objects like these whimsical carvings of animals in 60s-era Mao suits.

David Chipperfield. Appointed Commander of the Order of the Brtitish Empire for services to architecture in 2004, Sir David also became Royal Designer for Industry in 2006. 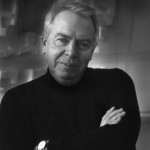 In 2010, he was knighted for his services to architecture in the UK and Germany.

Headquartered in fashionable Berlin, he works and lives in a building on the Joachimstrasse [above] in the Mitte neighborhood. The house is built of concrete and has two wings which face both the street and a paved courtyard with outdoor seating and parking space for bicycles.

On the building’s first floor, there is a café, a handy urban amenity for a busy professional and a stunning modern space in its own right.

With huge windows, Chipperfield’s personal space is in sympathy with the prevailing German taste for minimalist architecture and raw concrete.  The green velvet sofas provide a subtle bit of color.

Continue the tour of the exhibition with Where Architects Live II

Copy and paste link to quick-share this post:  http://bit.ly/1o0u3ki