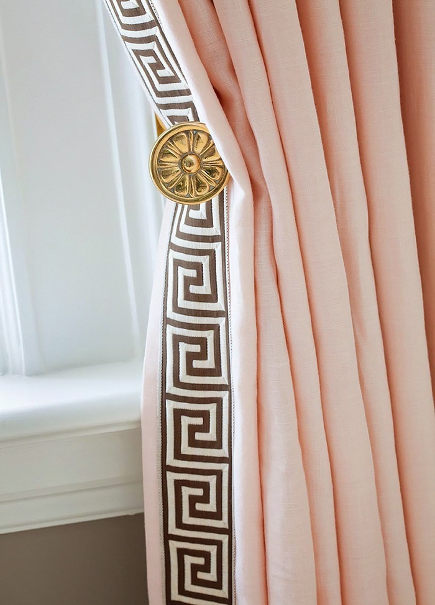 Cording, tassels, fringe, braid, borders, gimp and trims used on window treatments are 18th-century French notions born at the time when interior decoration first became a trade. The umbrella term is passementerie, from the French passement, or ornamental braid.

My first encounter with trim took place in Paris when I worked for a summer as assistant to a French art dealer. That year my job was answering the phone and helping to set up a new office he had procured in a musty old Left Bank building just off the Boulevard St. Germain. When I arrived there was a creaky staircase, sketchy electricity and drawers full of ribbons, tassels, and braid which failed to interest me. At the time, I was only interested in modern furnishings. But I spent my  time clearing out all the trim wound around long wooden bobbins from dozens of small drawers, cubbyholes and dusty boxes. It seems the previous tenant had just left his stock in place when he vacated. Or, perhaps he had died. I never got an explanation.

So passementerie and I go way back. However, I never thought much about these decorative drapery details or the world of trim (and it is a world!) until I took a Window Treatments class as a requirement for my design certificate at Parsons. There, I learned that names for various pieces in a collection, that the best trims are  made of silk (sometimes in France but more often in Asia), and why custom draperies can be so costly. Good trim is crazy expensive.

I still adore simple modern draperies. But on traditional curtains the right trim can be as luxe as jewelry that set off a red carpet gown. Toronto’s Anne Hepfer dressed up pretty peony-colored draperies [top] with a classic brown and white Greek Key border tucked them behind a brass rosette hold back.  The Greek key’s bold meander motif is popular now because it is so commanding and draws the eye immediately to whatever it adorns. And the square edges make it look modern on the   leading edges of a pair of draperies — the edges facing into the window. 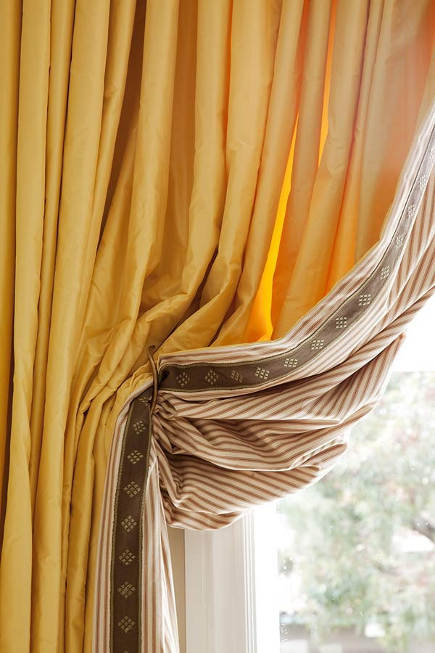 I have a special weakness for double-sided draperies because they feel so substantial and do away with the ugly lining. San Francisco decorator Palmer Weiss created these for a living room, backing sunflower silk with brown and white cotton mattress ticking. But it’s the woven brown tape border that creates a distinctive finishing embellishment when the curtains are tucked back. Also, the border is applied to the back side of the drapery panel so that folding it up and back makes it function like a leading edge detail. 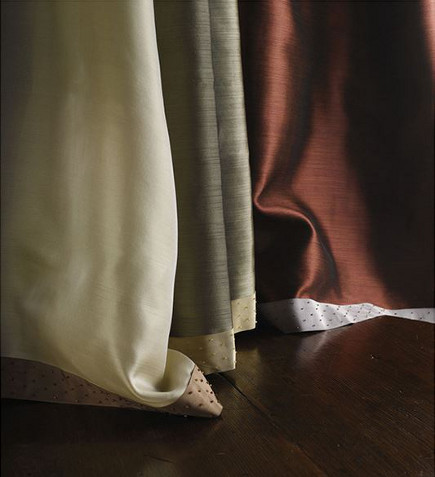 A major source in New York City, and one of my favorite designer haunts, is Samuel & Sons on Third Ave. next door to the D&D building. The Greek key tape was sourced form Samuel and their passementerie offerings are extensive. Designer Lori Weitzner’s Laurel beaded border — glass beads on silk banding – gives the bottom of these curtains an unusual dressmaker finish, essentially a sumptuous beaded hem. This treatment might not be suitable for every fabric but if draperies are meant to puddle, it adds  unusual glamor. 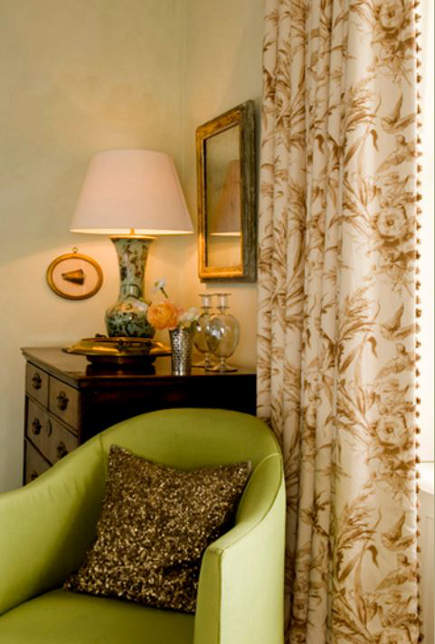 These chintz curtains, in an English beach house by Guy Goodfellow, have  a discreet trim that resembles rick rack on the leading edge. Understated, but quintessentially bespoke, this edge style has a serious air that is looks so traditionally English. 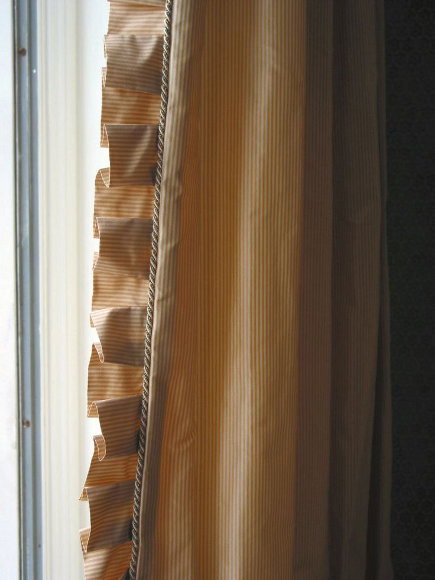 A box pleated silk ruffle, fashioned from the same fabric as the curtains, is finished by two-tone cording. Ruffles are always girly and call attention to the window in an exceptionally whimsical way. Cording is one of those drapery details that can be used in myriad ways which including finishing an edge or hiding a seam. 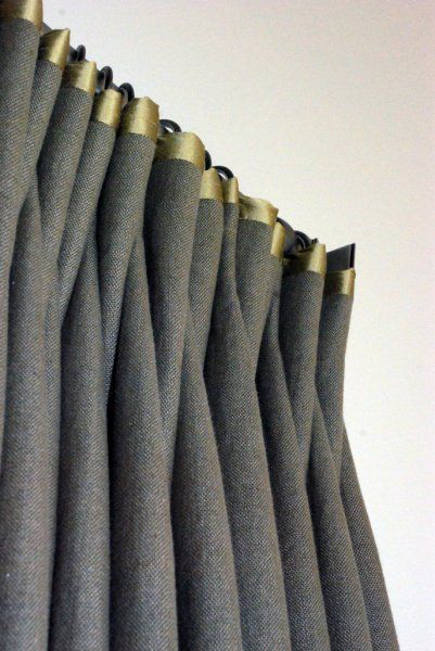 It’s rare to see embellishment along the very top of pleated curtains and it can be  tricky since the focus needs to be on the draperies, not the rods and rings. But these steel-gray linen draperies with a delicate green-gold satin band at the top are exceptionally handsome. Drapery Street, in Indianapolis, hung them so that the rod and rings barely show. I also love this informal style of pleating where the curtains stack back without looking very pinched or worked.

Copy and paste link to quick-share this post: http://bit.ly/1gnrwQs