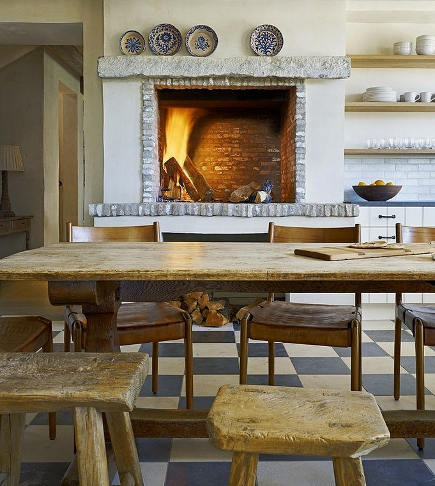 A wood burning kitchen fireplace can help create the aura of old construction in a new house.

The western United States has often led the way in creating homes which exude the informality of a European farmhouse or country house — without actually being a farmhouse or being located in the country.  Such an approach leans on stone walls, steel casement windows, and weathered wood beams of the type found in centuries old French or Italian dwellings built before the advent of drywall. A wood burning kitchen fireplace in a home by Arizona designer David Michael Miller offers a master class in interpreting this look with a restrained and exceptionally refined outcome.

Kitchens can be tricky propositions when “country” is intended because cabinets can so easily scream “suburban!” and functionality by the way of appliances often  intrudes. That’s especially true in kitchens with an open-hearth as the focal point [top]. As I noted in my post on the Five Greatest Kitchen Luxuries, a wood burning kitchen fireplace, which Italians call a camino, can be used for grilling or roasting depending on how grates and the fire are arranged. It is frequently built at counter height with a wood-storage box below. A dynamic and dominating feature in any kitchen, the impact seems magnified here in the U.S. where it is so uncommon.  Wisely, there is open shelving but no upper cabinets in the kitchen to compete. 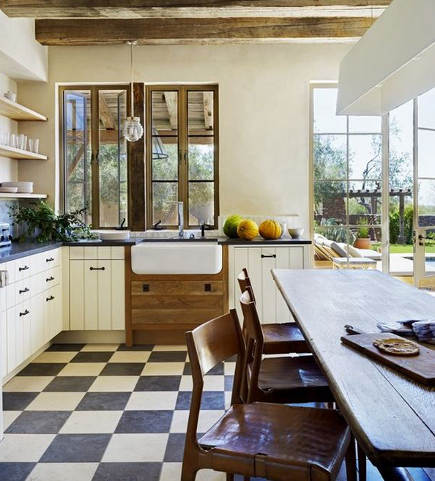 Fans of Downton Abbey may have noticed that food and service preparation takes place on a long table. That 19th century arrangement translates here to an elegant, distressed refectory table well illuminated by a trough-shaped modern pendant light fixture. The table occupies the center of the kitchen, in lieu of a fitted island, and does double duty: setting down space for the fireplace (requiring maximum light) and dining (for which dimmer light is needed).  Imagine dinner by firelight, too.

Checkerboard floors bespeak European interiors and this very traditional one also sets the charcoal and cream color scheme elaborated with painted plank cabinets and dark counter tops. But a secondary wood-tone theme is introduced by the natural wood base cabinet which cradles a white fireclay farm sink. Creating a special sink space helps point up the outdoor view and  tie it into wood used for ceiling beams, the window and table. 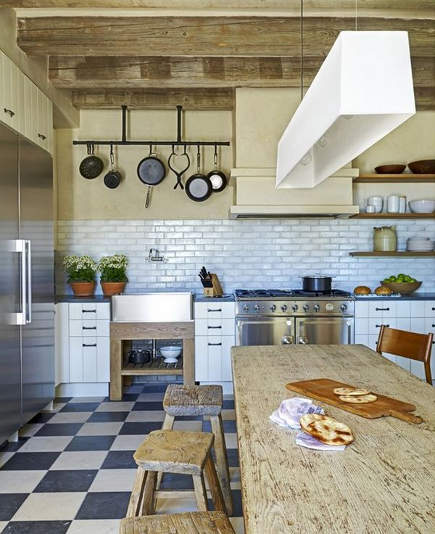 The current darling of European stove enthusiasts is the Cornue Fé range which has somewhat Deco styling. Made by Aga (which also owns the bespoke La Cornue brand) this range would dominate most kitchens. Here, it merely blends in. Even the hood is designed to meld into the upper wall. A simple tile backsplash is also intelligently thought through as a partial-wall affair where everything is not necessarily symmetrical. Perhaps the biggest surprise though, is the square basin prep sink installed like a bathroom vessel well above counter level. Sitting on an open wood frame, it has a practical slatted pot shelf below and a wall-mounted faucet above. Like other features in the kitchen, the approach is that of an old-world manor house but one blended seamlessly into the new world.

Copy and paste link to quick-share this post: http://bit.ly/Ku8DQf