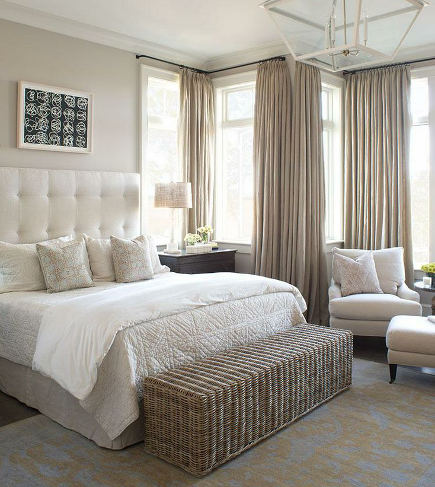 From light to dark, the question of neutral bedroom decor lies ultimately in the eye of the beholder.

Anyone can identify an interior as “neutral” but fine it down and things can get a little well, murky. Does neutral mean all white – the absence of color? Is it gray, beige, taupe with various mix-ins of white and cream? What about the validity of lavender, which was declared a neutral a few years ago.  And how dark can you go before moving out of neutral territory in a room? My thought is that most so-called neutral rooms are actually monochromatic since they have low contrast and similar color values. Some designers may not agree with that and the topic. It would make a lively topic for discussion. To illustrate my view, I’ve chosen 10 bedrooms I consider to be neutral or “restful” although they vary from white to gray, taupe, lavender and cocoa. There’s more variation on the neutral bedroom decor theme than one might think.

Off-white falls on the pale end of the theme in a bedroom by architect Wayne Windham [top]. Keeping the tufted headboard, bedding, walls and upholstered pieces nearly white allows the taupe curtains to frame the windows around an unusual square bay. A wicker bench at the foot of the bed picks up the curtain color and grounds it, along with the mottled beige and ice-blue rug. The few dark accents in the room – art over the bed, curtain rods, night stand and chair legs – are delicate enough to add interest without interference. 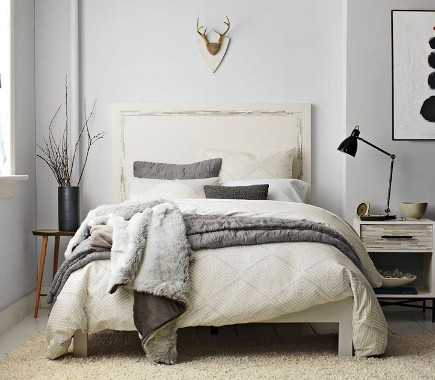 Styled to showcase the hand woven, wool shag Bello rug from West Elm-Australia, this bedroom has a youthful look and shape-shifter neutrality. Switch out the gray pillows and throws for, say, leaf green or orange and the mood would change dramatically. Question: is ivory the most neutral of all? 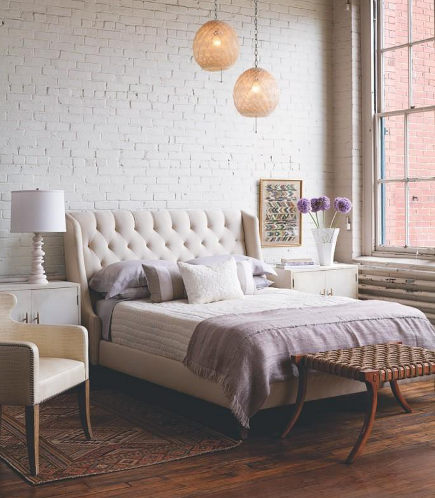 Lest there be any doubt about whether lavender can look neutral, this bedroom puts it to rest. A lavender throw across the foot of the bed, accented by a vase of allium, pull mutable gray bed linens across the violet divide. The effect is subtle and soft. 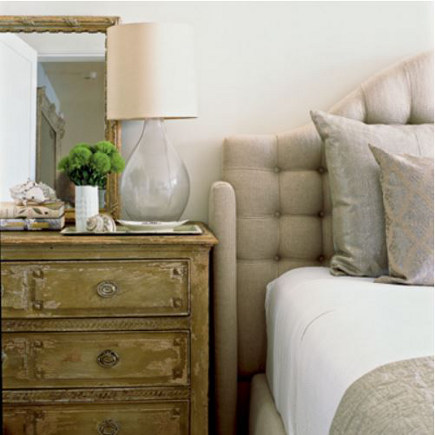 The most frequently seen neutral scheme turns on the combination of white and natural linen. Linen is, of course, actual greige goods since it is neither bleached nor dyed. And it’s so popular every catalog boasts a linen headboard. So while the fabric on this tufted beauty bespeaks popular style, California designer Tim Clark pulls some unusual gray-green into the mix through the use of a chippy paint-decorated chest topped by a vase of brighter flowers. 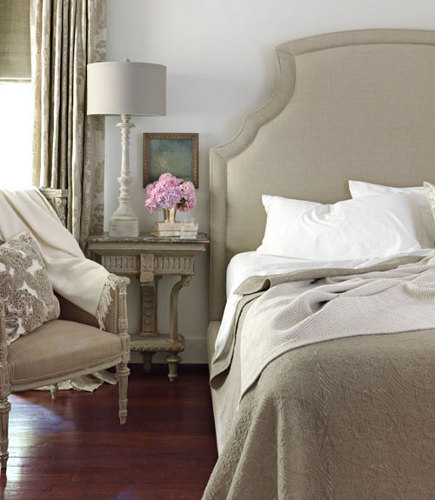 Tone-on-tone greige with an odd number (I count three) of patterns and textures creates an especially rich, traditional Alabama bedroom by Tracery Interiors. I adore the shaped Bernhard headboard which subtly echoes the base of the bedside table. The throw pillow is from Ankasa and Benjamin Moore’s Revere Pewter paint produced the ethereal gray-tinted wall. 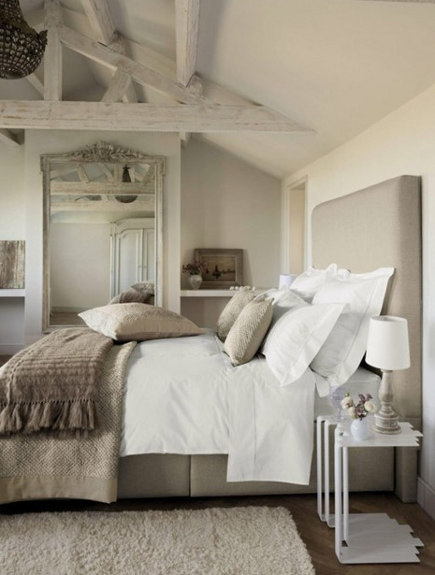 In this tone-on-tone bedroom, a toast-colored throw over the beige bed cover adds a layer of neutral interest. All the hues blend here — only the dark chandelier (top left) stands out. 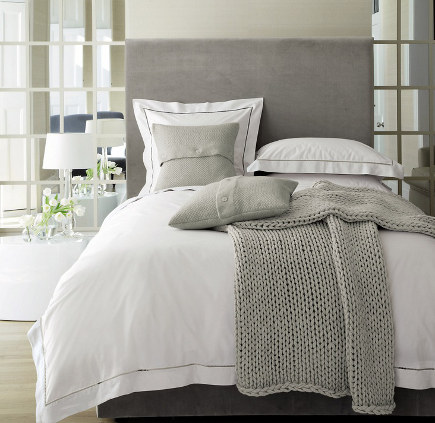 This bedroom outfitted by The White Company, out of London, features elegant hem-stitched sheets and some glitzy mirrored paneling that reads young, hip and urban. The plush gray platform bed and jumbo sweater throw make me want to curl up here. Yet there’s also a somewhat  commercial aura – like a girly hotel room at home. 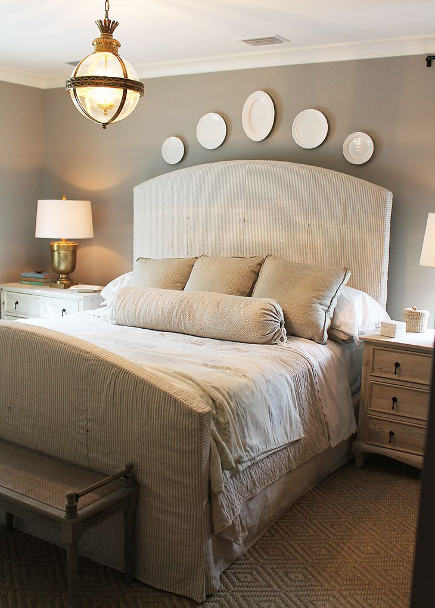 Taupe walls and a bed done up in beige mattress ticking give off a country vibe. But this bedroom, in Coastal Living’s 2012 Ultimate Beach house, is beautifully dressed up by Circa Lighting’s burnished brass urn lamps and banded globe pendant. Soothing is the operative adjective here thanks in large part of Pratt & Lambert’s Ever Classic 32-24 wall color. But I must ask: does anyone else get spooked by the idea of crockery hanging on the wall overhead while you sleep? 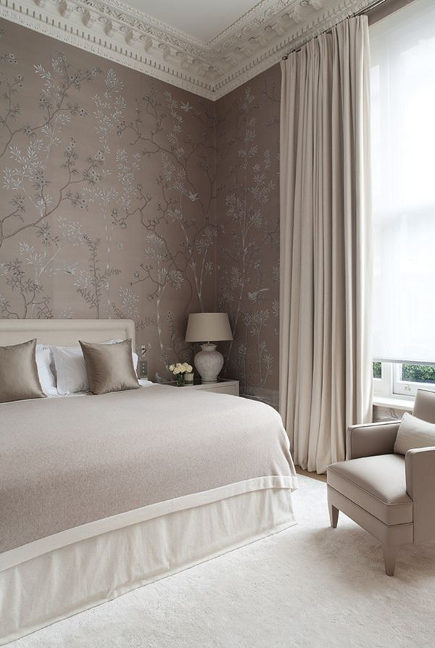 Elaborate crown molding always creates a certain formality and that effect is heightened by the sublime 18th-Century style wall covering. This English bedroom by the talented Todhunter Earle team is as soothing as a steaming cup of latte — from the impeccable draperies to the lush bed. And the stately quality pushes it into boudoir territory — can’t you just feel those silky sheets, and the soft white rug on your bare feet? 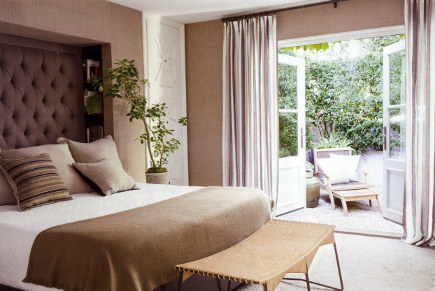 A custom upholstered cocoa-colored accent wall/headboard/niche takes neutral as dark as it can go in landscape designer Scott Shrader’s West Hollywood bedroom. With large French doors open onto a walled garden, the Kneedler Fauchère 133 silk on the walls has a chic Parisian feel. And, given the bright Southern California light, the toast-colored cover and accent pillows are bound to  look cool during the day and warm but inviting at night.

Copy and paste link to quick-share this post:  http://bit.ly/1fgpkd5