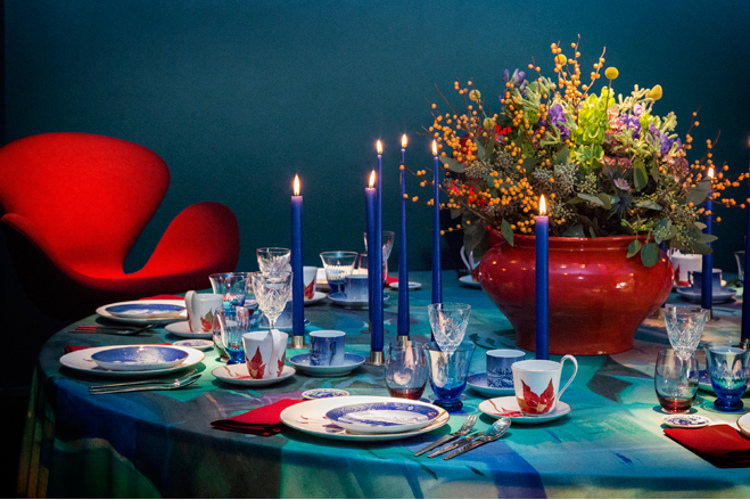 The 2013 theme is Royal Copenhagen Modern Christmas, with vivid color and design.

Denmark’s world-famous maker of porcelain and fine china is celebrating the 50th anniversary of their annual holiday table displays with a Royal Copenhagen Modern Christmas. This event draws crowds to the flagship store of Copenhagen’s 238-year old retailer in the same way Americans flock to see department store windows in New York during the Christmas season.

Artistry is the theme this year. Among the seven prominent people picked to design modern Christmas tables are artists, architects, fashion and jewelry designers, an interior designer and a master chef. But the common theme I found was the contemporary approach to both the place settings and to the selection of Royal Copenhagen patterns. Perhaps I’m hyper-traditional but I always look forward to the lavish display of RC’s Flora Danica, which is certainly among the most costly china patterns in the world. And each year I enjoy seeing how the way the Christmas garland china will be used. Unlike past years, neither of those made an appearance. 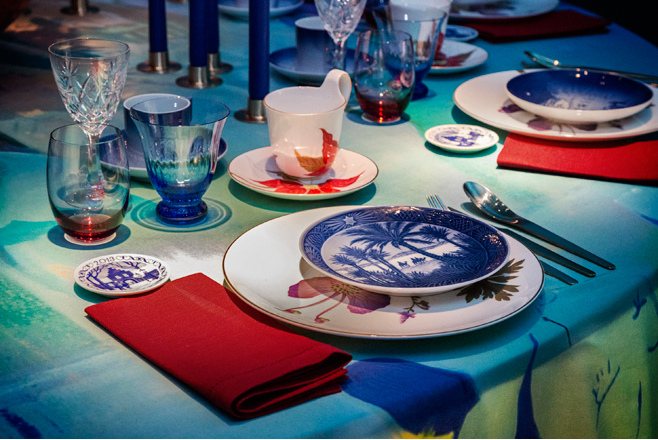 One distinguishing aspect of this year’s tables was vivid color – though not necessarily Christmas color. Fabric designer Cathrine Raben Davidsen used a vivid, predominately red and blue silk print of her own design as a table covering [top]. Davidsen’s old-fashioned “Christmas platter” theme revolved around community sharing of food at holiday time and seemed almost childlike with the use of the indigo 2013 Copenhagen Harbour Christmas dishes [above]. I was unable to locate the charming white dishes festooned with botanical flowers. 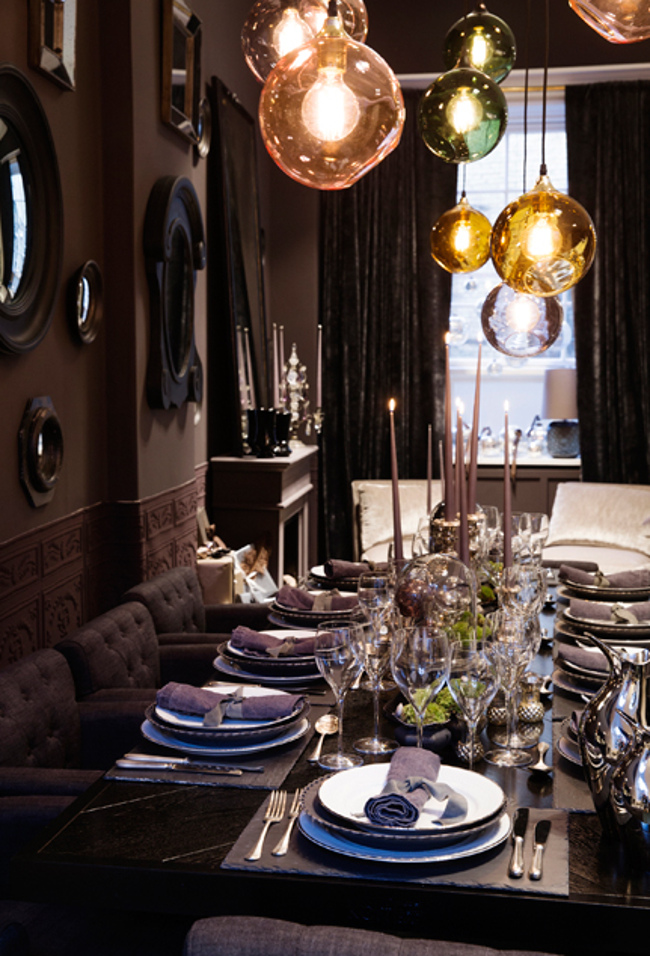 Fashion designer Julie Brandt Dam took her table neutral and – apart from festive bottle pendant lights this looks like a Christmas dinner table in a corporate board room. 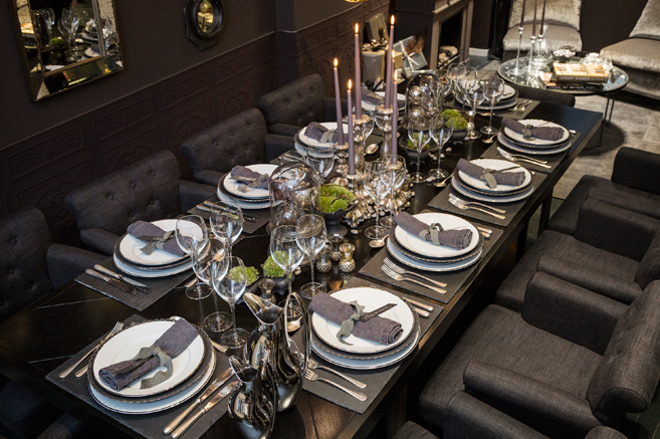 Pops of mossy green in the centerpiece almost keeps the steely gray table from appearing monochromatic. 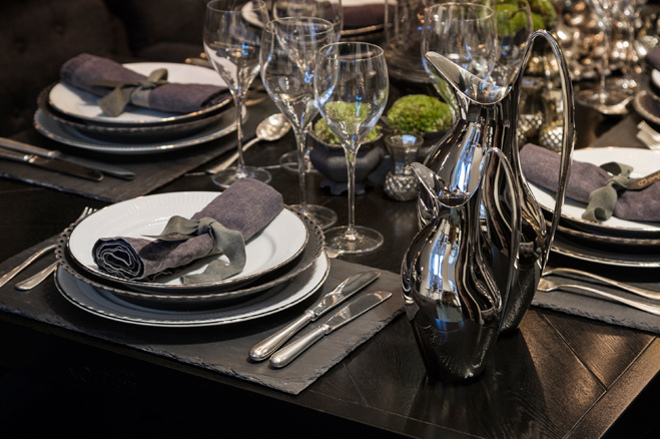 I love to see a holiday table set with the elegant Fluted Platinum china which keys into the overall heavy metal theme. Christmas should be bright and shiny. 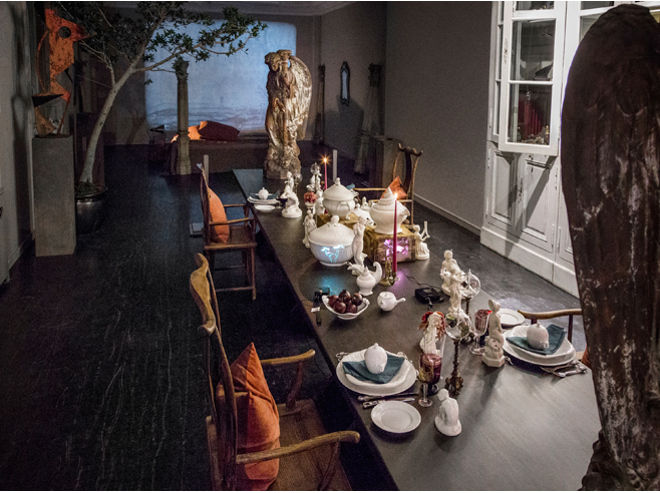 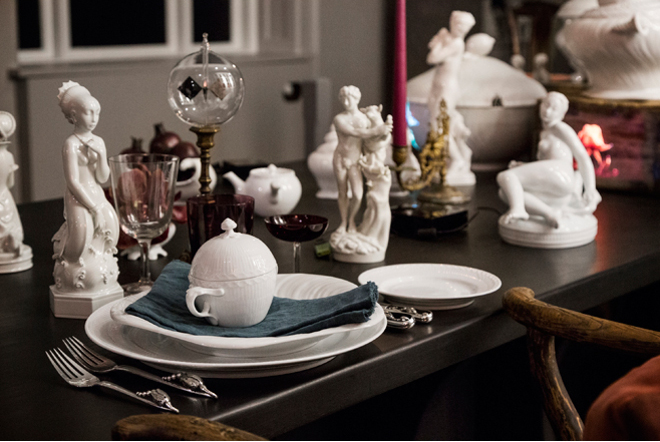 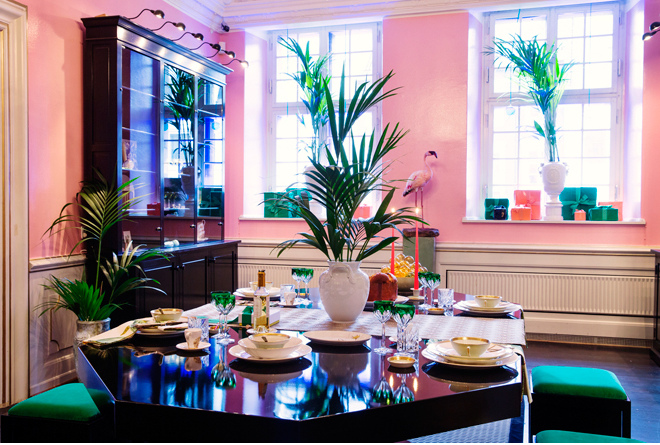 Jewelry designer Rebekka Notkin chose emerald as a major accent color for her table and played it off against a hot pink background. This girly approach to Christmas looks refreshingly bright and light. 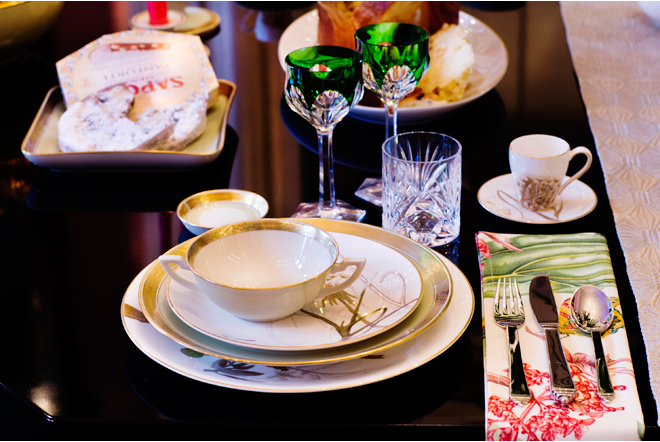 Dishes from the Flora range along with botanic print napkins almost have a tropical aspect — as if the setting sun has taken on a pinkish glow. 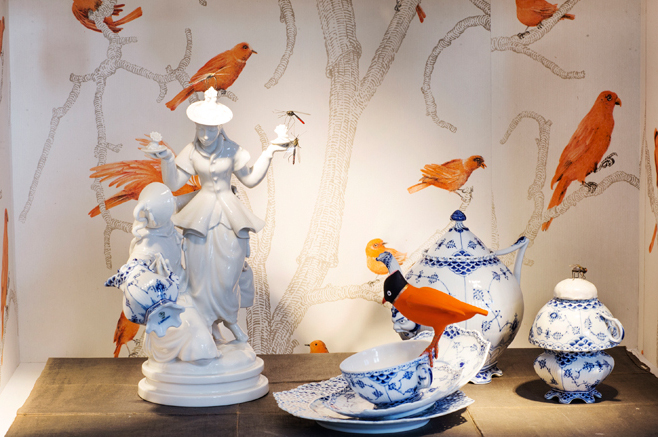 Dutch artist Wouter Dolk dispensed with the notion of Christmas dinner and went for vignettes instead. A white Chinoisierie figurine, mixed with the hallmark Blue Fluted Half-Lace china also features orange birds – a mix that nods to the 18th century origins of Royal Copenhagen blue-and-white design. 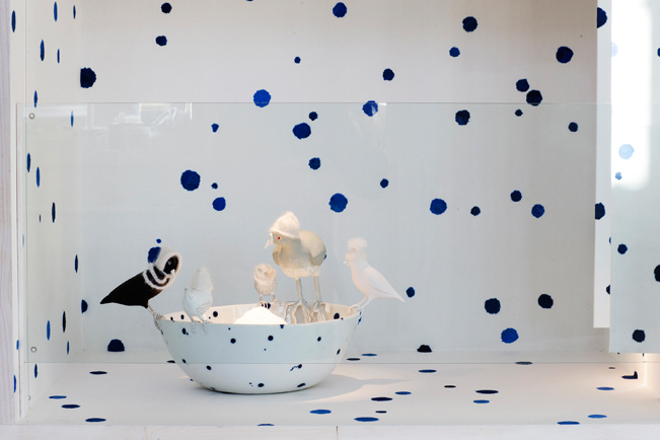 Spatter painting is often found on the walls of Scandinavian homes. Blue and white spatters are the theme of another of Dolk’s boxed vignettes, along with more sweet little birds. 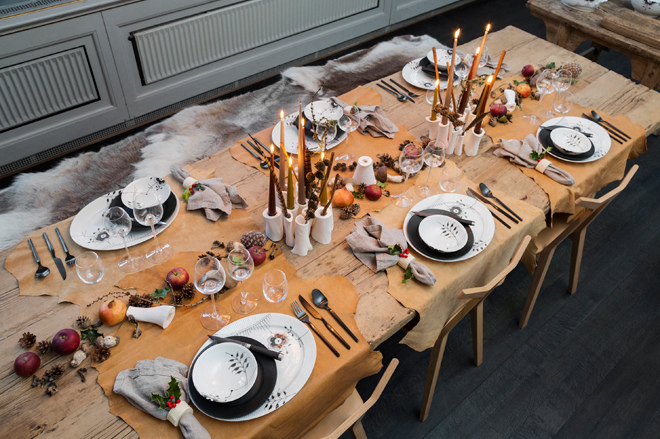 Chefs Thomas Rode, with wife Thilde Maarbjerg, came up with a Viking theme of sorts for their table, with fur thrown over chair seats and pieces of animal hide used for place mats. 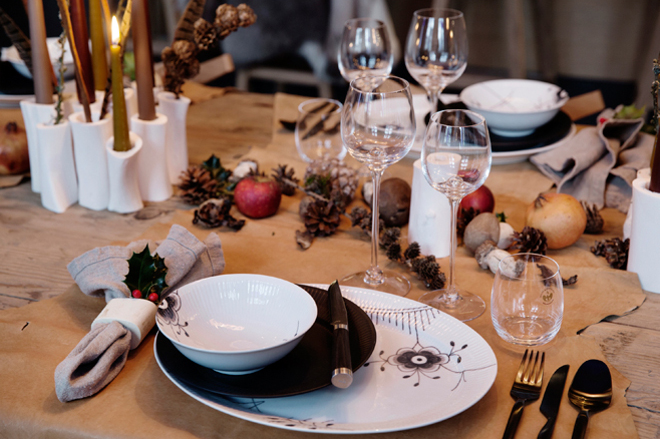 Up close, the table was warmed by a centerpiece composed of fruit, gourds and pine cones along with a sprig of holly tucked into the folds of the napkins. Black Fluted Mega and Black Fluted dishes look stunning in this mix of the sophisticated with the organic. 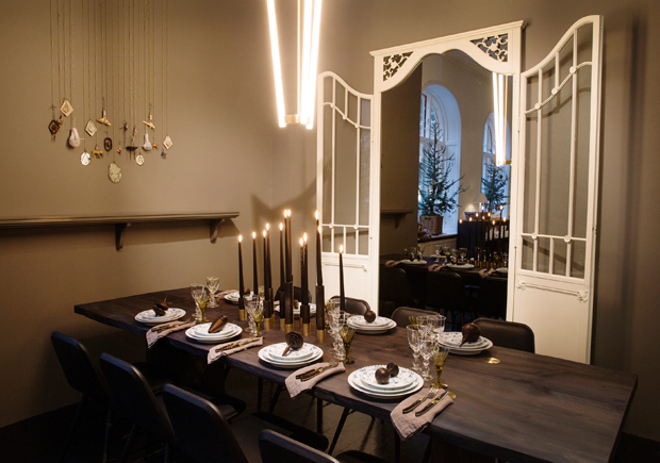 Architects Signe Bindslev Henriksen and Peter Bundgaard Rutzou of Space Copenhagen created one of my favorite tables this year. Evoking Art Nouveau architecture from the turn of the 19th century by way of dramatic white-painted curved doors to the entrance of their dining room, the pair did a visual update by painting the walls cocoa brown and using an even darker natural wood table stained the color of coffee. 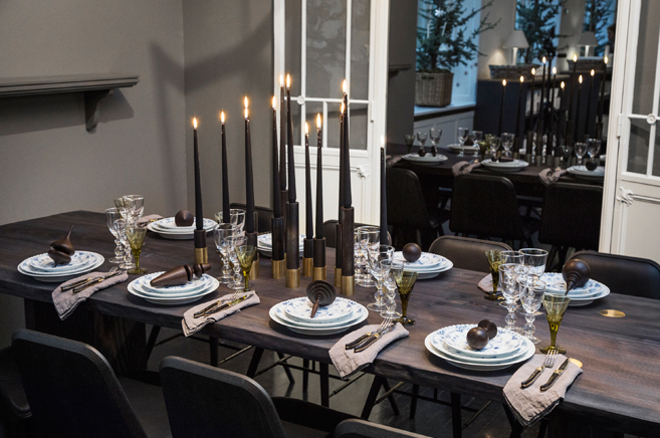 Against all the darkness, the 200 year-old Blue Fluted Full Lace pattern dishes become a statement piece. 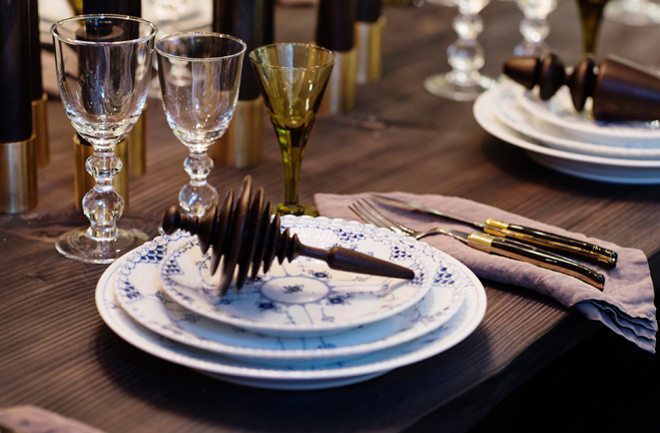 Even on a contemporary table set with rumpled linen napkins, the Blue Fluted Lace china pattern can stand the test of two centuries.

Copy and paste link to quick-share this post:  http://bit.ly/17FaVDZ