You are here: Home / Decor / The Meander Motif 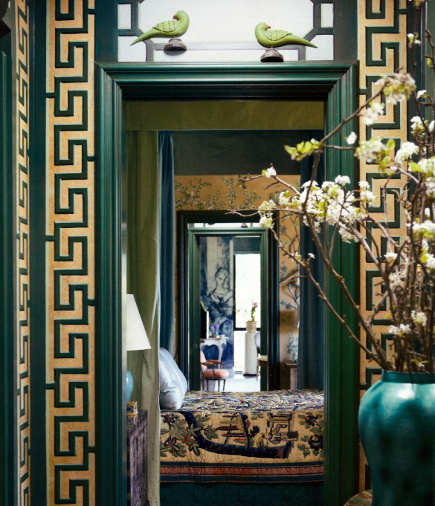 Whether it’s called a Greek key motif, Greek fret or meander motif it’s been used since the time of the Parthenon. So while it may seem Granny or formal, fretwork is finding a new audience — both online and in magazines. It’s appeal, no doubt, lies in its hard right angles, which work with modern, and the contrast it provides in almost any combination of hues.

In the great 19th century catalog of design motifs, “The Grammar of Ornament,” author Owen Jones describes the Greek fret as an “arrangement of form that can be produced by the interlacing of lines at right angles.” Ranging from a simple decorative border composed of a single line running in one direction, to a complex of interlocking horizontals and verticals that run in multiple directions, the critical distinction for a “perfect” example is a “continuous meander” – unbroken movement. However, fret forms appear in many architectural traditions and are open to interpretation. The Greek key motif may be elongated, raked (slanted), fragmented or uncoupled. In spite of variations, it jumps out. Rendered in gold and Christmas green, it’s outrageous around a doorway in the Los Angeles home of Hutton Wilkinson [top], partner of the legendary set decorator and designer Tony Duquette. Wilkinson recently appeared on Bravo’s real estate show Million Dollar Listing LA when Duquette’s Malibu home (which he owns) was put up for sale. 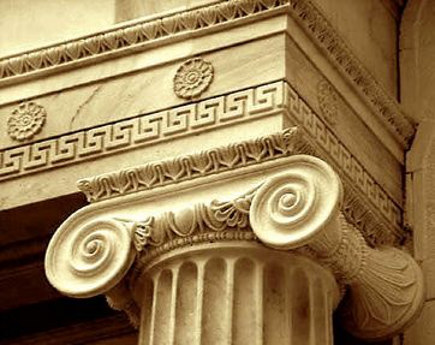 Classic Greek fret proportions are rather square and give it a sense of movement (meander) that seems to propel it around the corner of this stone architrave. 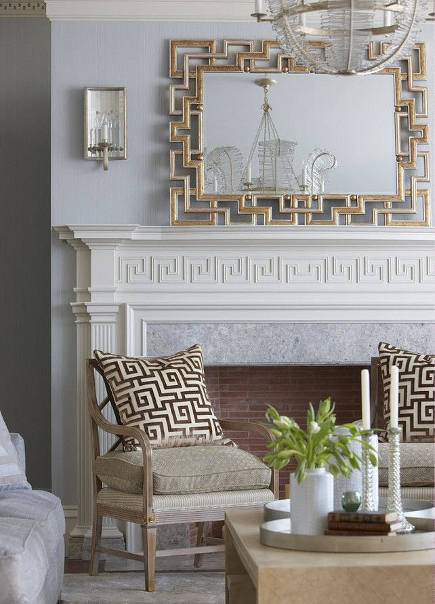 Variations on the mantel’s classic fret are found on the pillows and mirror frame. 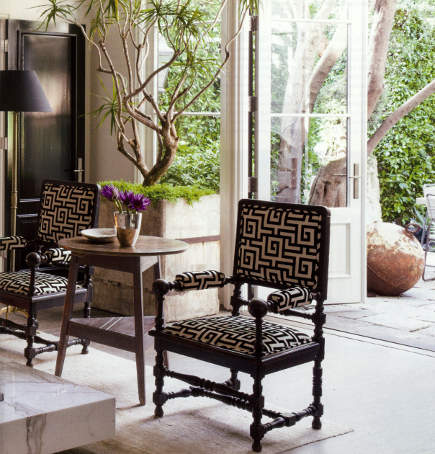 While beige and chocolate are combined in this  popular fret fabric. This overall broken pattern has a dominating impact even on the back and seat of a frame chair. 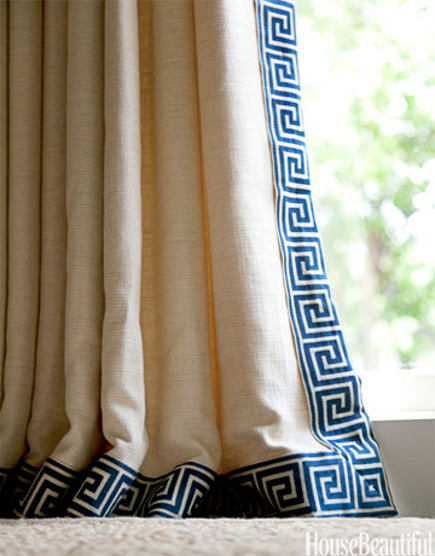 Woven banding is often used as a border embellishment for draperies and upholstery. In blue and white the Greek key motif looks bold. 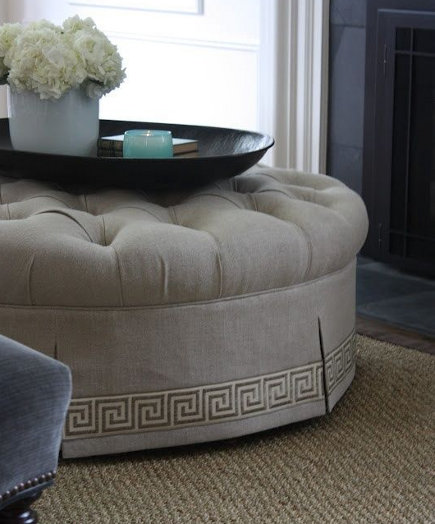 A tone-on-tone Greek key band dresses up natural linen on an ottoman skirt. 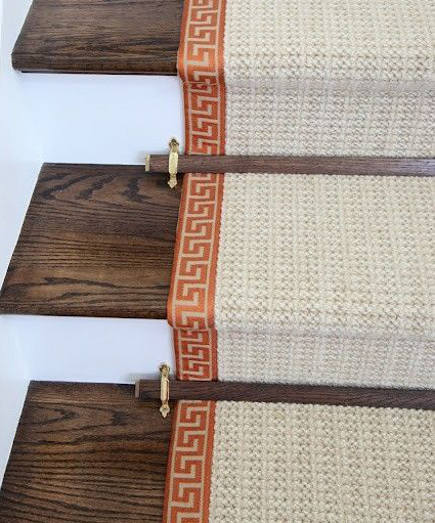 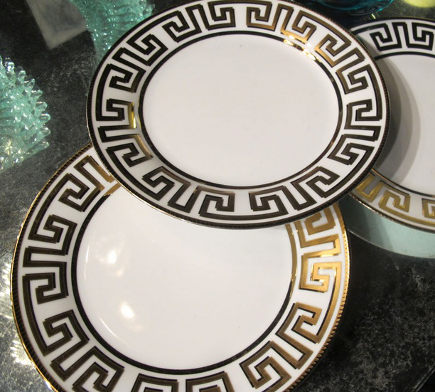 Kelly Wearstler went metallic with fretwork as a border on dinner plates.

Enclosed Greek key banding on Williams-Sonoma linens looks demure in comparison to the draperies above, even in a similar colorway. 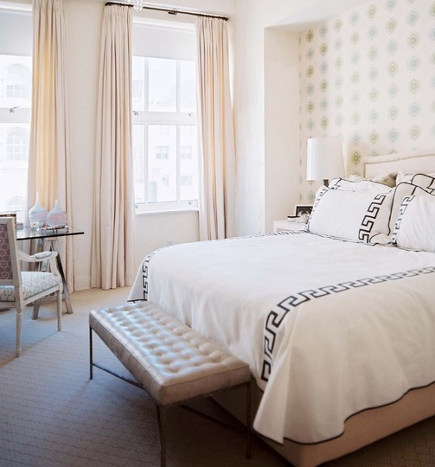 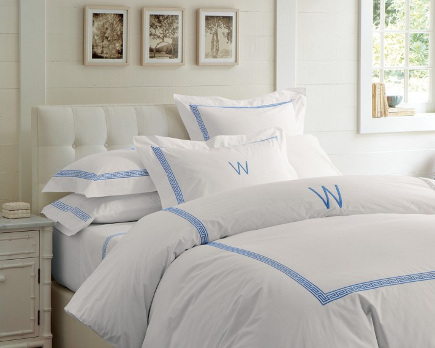 A large high-contrast black fret on white linens in a an urban bedroom room by Sara Gilbane reads as bold and contemporary. 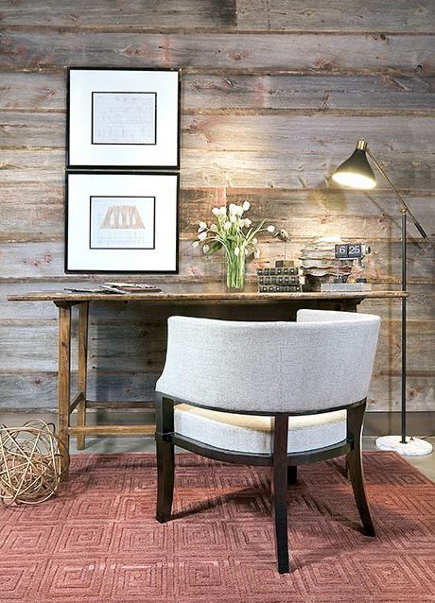 Woven into a monochromatic carpet, the motif almost disappears. 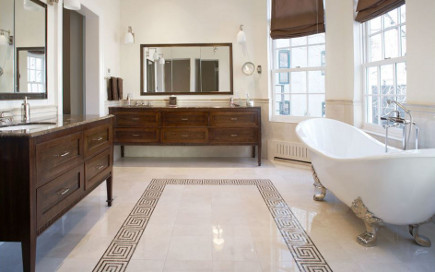 Here’s the beige and brown combination that creates a virtual “rug” out of polished crema marfil marble and Colorco Alpha tiles (from Artistic Tiles) on a glamorous but traditional bathroom floor. 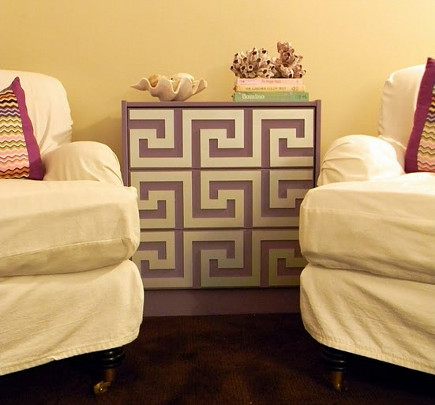 A fret relief can be applied to the most elemental piece of furniture and contrast painted. While this particular piece goes cottage, the late Dorothy Draper created furniture with the same effect during the 1940s and ‘50s. 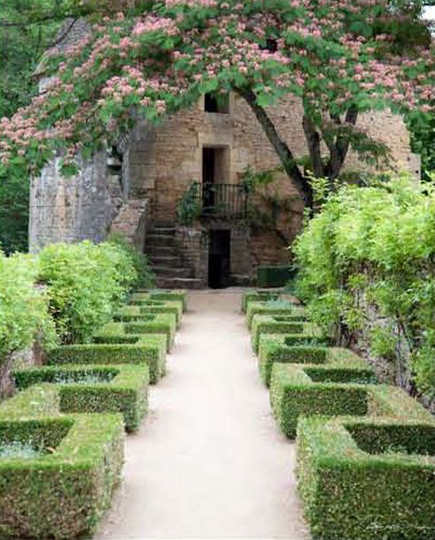 This meandering boxwood border might be considered a gardener’s dream or a high-maintenance nightmare. I’d kill for this one which is the work of New York designer Charlotte Moss who doubtless employs staff to maintain the precise shape. The rest of us would need sharp shears or a period visit from Edward Scissorhands.

Copy and paste link to quick-share this post:  http://bit.ly/1g3BhEx