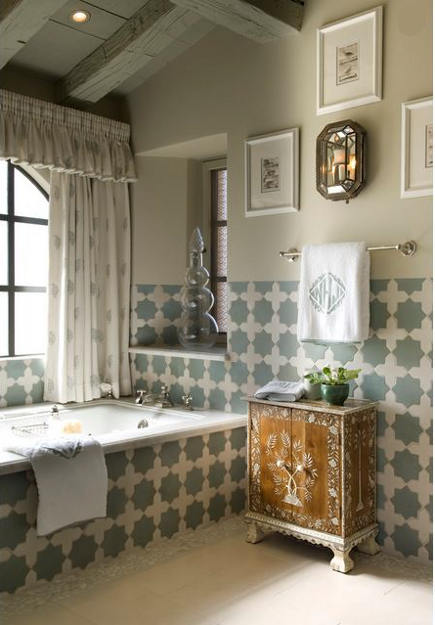 Pattern can be created in bathrooms using Moroccan shaped tiles.

In Morocco, where tile is an art form, pattern is not restricted to surface decoration or the size of their glazed earthenware tiles known as zellige (also zillij). Often it is a function of the Moroccan shaped tiles and their combinations of colors. We recently discussed the lantern or arabesque shape in our Kitchen Backsplash Tile Intelligence post as these are especially trendy. I reported on the also arched scallop or fish scale tiles in our Scallop Tile Bathrooms post. Now, two more Moroccan shapes – stars and triangles – are shown in a pair stunning bathrooms by Dallas designer Cathy Kincaid. Eight-point Moroccan stars are an ancient tile pattern. Kincaid used those in a large-scale sea foam green color [top] to create a distinctive wainscot that helps unify two windows and the entire area around the tub. One additional effect of using shaped tiles is the creation of positive and negative patterns. The stars read as positive while the negative white tiles around them read as a secondary pattern of crosses. 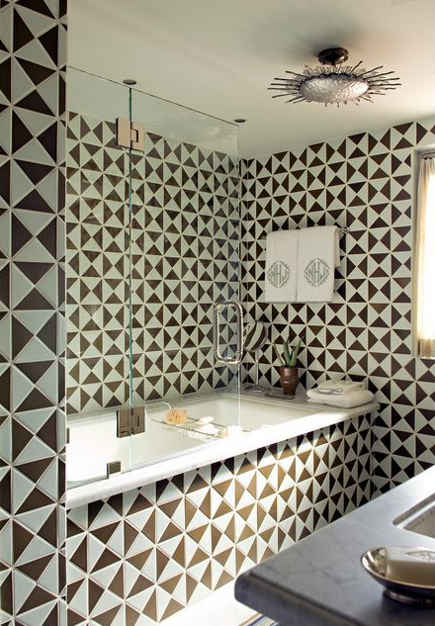 In a second bath, chocolate brown and white triangular tiles are worked into boxes with opposing colors. But by alternating the placement of the whites against the brown sides, there’s an optical buzz rather than rows of solid squares. The effect is well accentuated by tiling from floor to ceiling as well.